MBK is nearly deserted after the emergency decree took effect. The Federation of Thai Industries wants the government to implement relief measures for affected employers and employees. (Photo by Arnun Chonmahatrakool)

The Joint Standing Committee on Commerce, Industry and Banking (JSCCIB) is calling on the government to suspend financial contributions to the Social Security Fund for four months for employers and workers affected by the Covid-19 pandemic.

At a JSCCIB meeting on the Covid-19 crisis, Supant Mongkolsuthree, chairman of the Federation of Thai Industries (FTI) and the JSCCIB, made a variety of requests for relief measures from the government, calling the current measures insufficient.

He said the organisation wants the government to add support measures to help employers and workers, such as increasing unemployment benefits for workers from 50% to 80% of total salary. The current relief package pays laid-off workers 50% of their salaries with a ceiling of up to 15,000 baht a month for a maximum of 180 days.

The JSCCIB also requested a four-month extension on utility payments for households, factories and offices, and said the government should allow trucks delivering food and other essential products to operate 24 hours a day to support critical industry and supply chains and prevent food shortages. 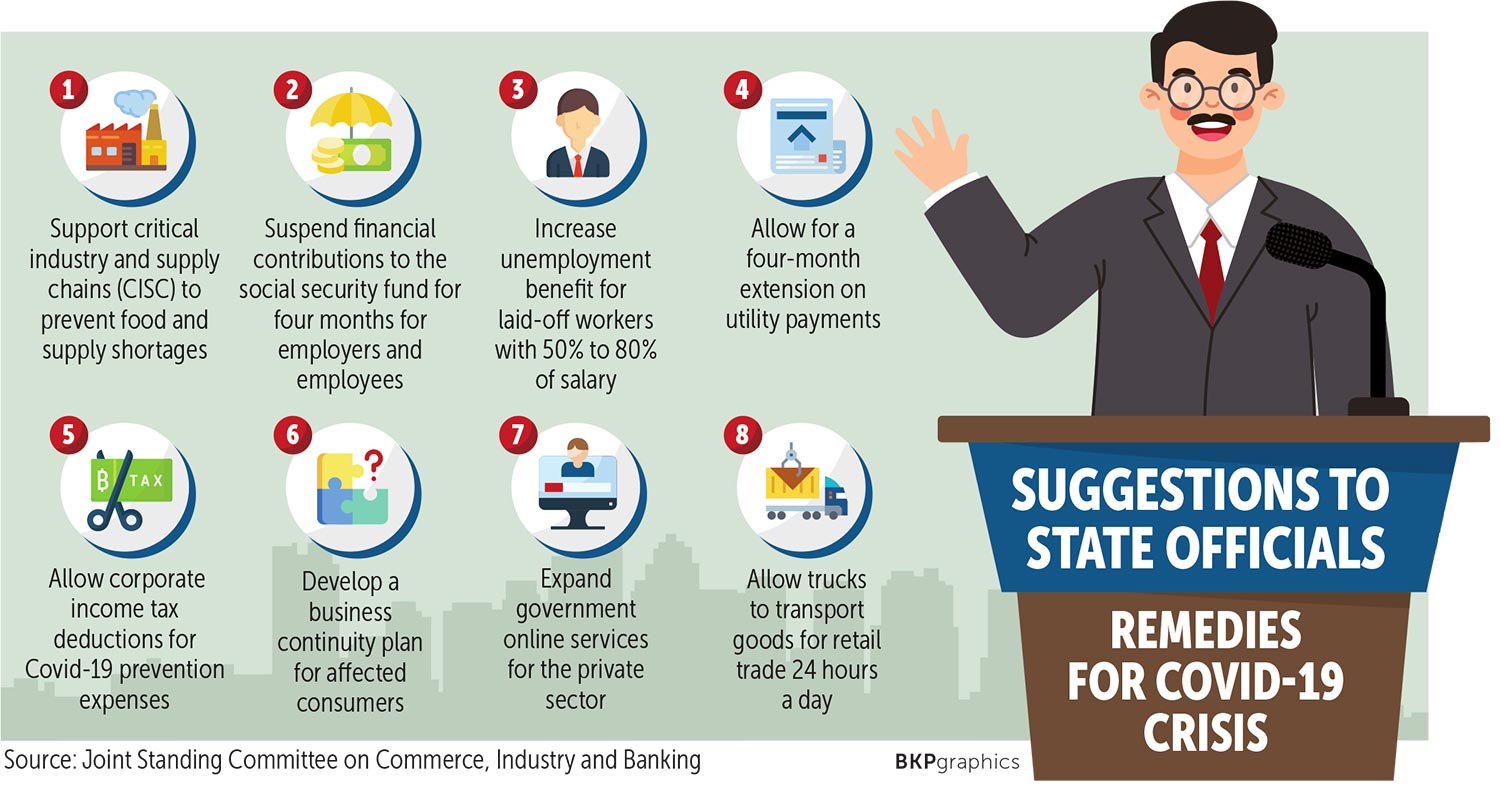 The committee is also asking the government to allow corporate income tax deductions for Covid-19 prevention expenses and for it to develop a business continuity plan for affected consumers, while expanding online government services for the private sector.

"The measures should cover all business sectors, workers and employers in Thailand, and if possible the government should support them all because the outbreak affects all people," Mr Supant said.

Earlier this year, the organisation cut its 2020 economic growth forecast to 1.5-2% from a recently downgraded 2-2.5%.

The new projection is based on expectations that the virus impact will end by June, after resulting in no economic growth in the first half.

Kalin Sarasin, chairman of the Thai Chamber of Commerce, said business operators should cooperate with the government in coping with the outbreak's effects on the economy.

"But we don't think it will last that long, because the situation should improve soon if people follow the government's measures to stay and work from home," he said.

Mr Kalin said the government should allow essential industries such as food and beverages, medical equipment, telecommunications and information technology, financial institutions, and agriculture and processing to continue business as usual to maintain upstream supply for manufacturers and the energy sector.

Upstream industries include those that supply raw materials for manufacturers, market channels that supply foods and consumer products, and transport and logistics.

"Those industries should let producers operate their factories under the emergency decree," Mr Kalin said.