CentralWorld and the central business district of Bangkok, usually thronged with locals and tourists, have fallen silent during the coronavirus outbreak. (Photo by Wichan Charoenkiatpakul)

The Thai economy would shrink by 5% this year in the World Bank's worst-case scenario, with the coronavirus outbreak compounding existing problems like drought, stagnant wage growth, rising unemployment and growing poverty.

If the global lender's forecast holds true, the contraction will be similar to the 5.3% decline projected by the Bank of Thailand and represent the biggest GDP contraction among the emerging Asean economies analysed.

It would also mark the first full-year contraction since the 2008 global financial crisis, which resulted in a 2.3% downturn for the economy in 2009.

A rise in local virus infections has compelled the government to impose a nationwide night-time curfew, from 10pm to 4am, starting today, with exemptions for essential services like medical care and fuel transport.

Thailand had 1,875 confirmed cases of the virus as of Thursday, with 15 deaths nationwide.

The country's economic growth outlook for the medium term has significantly worsened since last October, with projections for 2020 revised down from 2.9% growth to a range of -3% to -5%, the World Bank said. 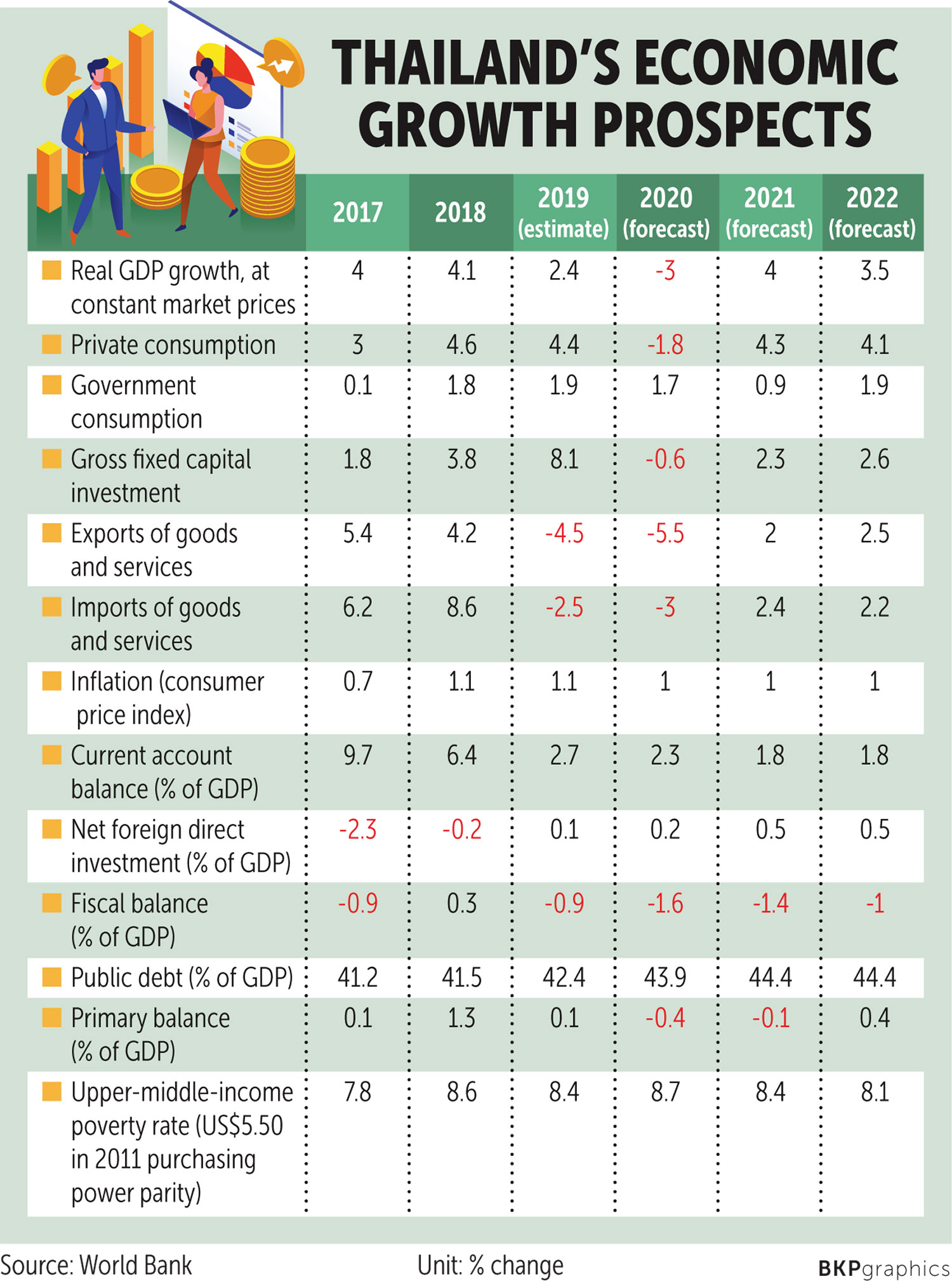 "Thailand is relying on tourism because the sector accounts for 13-16% of GDP," said Kiatipong Ariyapruchya, senior country economist for Thailand. "The outbreak can also lead to a slowdown in domestic consumption, exports, imports and private investment."

A key driver of the downward revision is the impact of the pandemic, which is expected to significantly reduce tourist arrivals and, in turn, hit overall consumption growth due to weaker activity in the retail sector.

The impact on domestic consumption is reflected in public health measures regarding social distancing and depressed consumer sentiment. Supply chains for electronics and automotive, critical to exports, have also felt the sting of the health emergency.

"The baseline assumes a muted spread of the outbreak in Thailand, a significant worsening of global growth prospects in 2020 and structural challenges in disbursing public spending," the World Bank said.

The medium-term outlook is subject to higher domestic and external downside risks.

"The main risk is that the impact of the Covid-19 outbreak may be more severe locally and globally," the bank said. "A more severe local outbreak could dent consumer and investor sentiment further and necessitate a stronger public health response, which could limit private consumption.

"A further global spread could severely impact supply chains and overall exports, due to a regional and global economic slowdown."

The outbreak will also add to existing challenges for the Thai economy.

"Poverty projections indicate that the poverty rate in 2022 will remain higher than in 2015," the bank said. "In addition, the expected reduction in foreign tourists in 2020 and closures of malls and restaurants will likely have a significant impact on poverty for those living in popular destinations."

For example, Phuket was the only province where poverty increased to a point higher than in 2000, linked to a reduction in tourism after a catastrophic boat accident in 2018.

Government policies to help households weather the economic downturn, such as relaxing debt payments and targeted social programmes, may help mitigate these negative impacts, according to the World Bank.

Thailand's 2021 GDP growth is projected at 4%, buoyed by fiscal and monetary stimulus measures for all business sectors, Mr Kiatipong said.