Tourists use alcohol-based hand sanitiser at Suvarnabhumi airport as demand for alcohol disinfectant has surged since the outbreak.  (Photo by Taweechai Tawatpakorn)

Ethanol is purified alcohol at 99.8-99.9% made from cassava or sugar residue that is blended with unleaded gasoline to make gasohol, a fuel used in the transport sector.

Alcohol only needs to be 70% pure to kill the Covid-19 virus.

Use of alcohol in the medical sector has soared in recent months in an effort to stop the spread of the coronavirus.

Earlier in March, policymakers removed a restriction that blocked ethanol producers from making other forms of alcohol.

In conjunction, the Excise Tax Department removed the excise tax for liquor with an alcohol content of over 80% that has been processed into an ingredient to make hand sanitiser.

The department is in the process of relaxing ethanol sales regulations, which will be valid until Sept 30, specifically to help with the production of hand-sanitising products.

The current availability of ethanol is sufficient to produce sanitising products for the general public, but a shortage continues at many retailers.

Sirivuth Siamphakdee, honorary advisory to the Thai Ethanol Manufacturer Association (TEMA), said rising demand for alcohol in the cosmetics sector over the past two years is partly to blame for the shortages.

Since the virus outbreak, demand for disinfecting alcohol in the medical sector across the world rose considerably, making it difficult to import alcohol to keep up with local demand.

Mr Sirivuth said normally ethanol makers have long-term purchase contracts with oil traders and refineries that would be a priority, but because the virus outbreak has shut down land and air transport considerably, the ethanol was not needed.

Although diluting the alcohol content of ethanol to make sanitiser involves a light production cost, producers can bear the costs, he said.

The medical alcohol produced from ethanol will need an approval licence from the Excise Department through delivery, and each shipment cannot exceed 5,000 litres.

Buyers of alcohol for general trade or for donation to hospitals must also have approval from the Food and Drug Administration (FDA).

Even with the extra alcohol, Mr Sirivuth said the nation faces a shortage of plastic tubes and bottles used to hold hand sanitiser.

The containers are normally imported from China, which closed all traffic a month ago.

He said there is speculation that some of the shortage is because of alcohol hoarding, although the government is serious about cracking down on illegal trade. 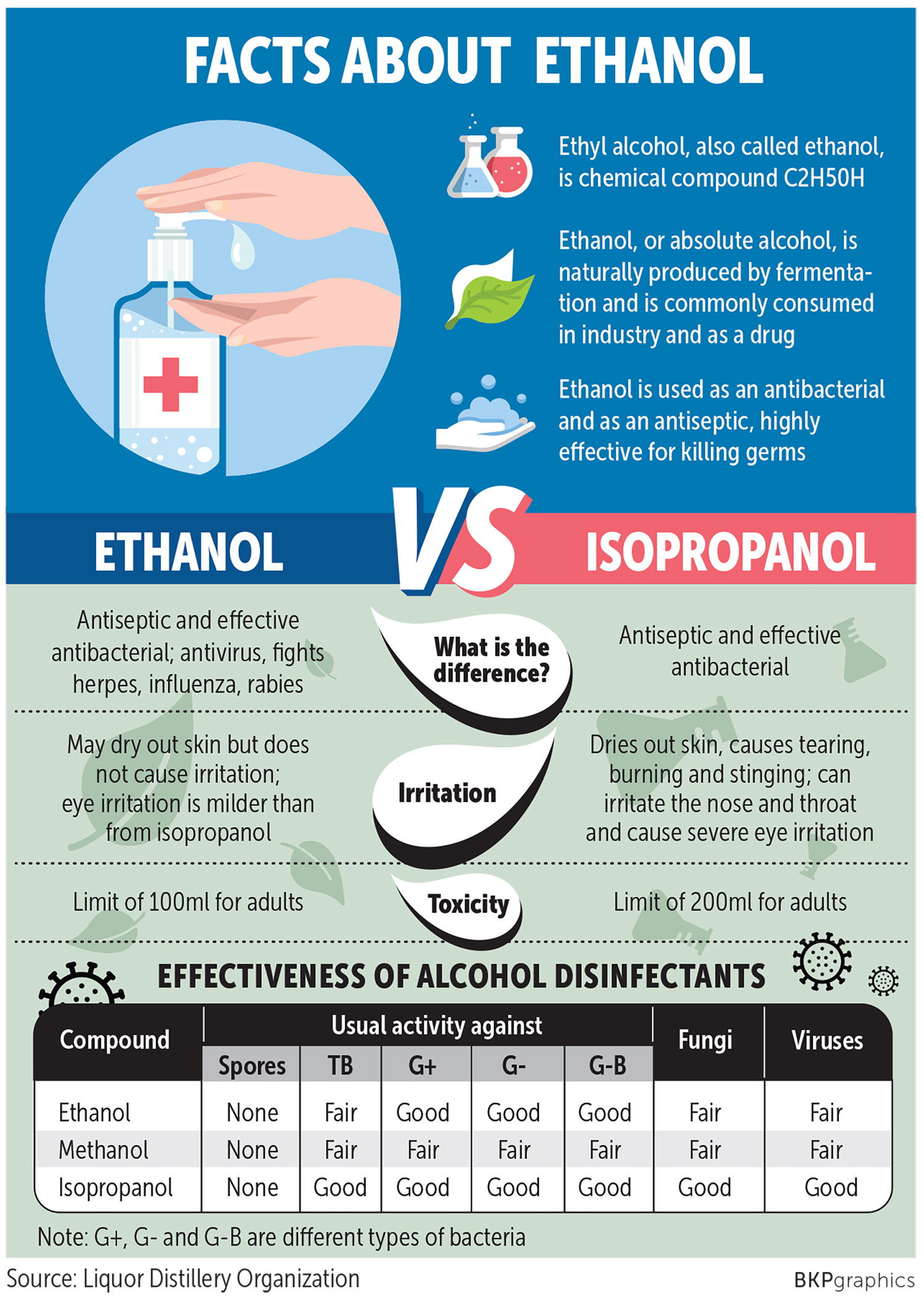 TEMA and all 23 ethanol makers expect the issue will be resolved within two weeks.

The Centre for Covid-19 Situation Administration has received complaints from TEMA and the group hopes the supply shortage will be sorted out soon.

TEMA president Pipat Suttiwisedsak said his organisation has been ready to deliver its ethanol surplus to 800 sanitiser makers since last week.

He said the ethanol stock stands at 115 million litres, ready to deliver to the market within two weeks.

Mr Pipat also reiterated the notion that some people may be hoarding alcohol.

"I warned them that hoarding alcohol may not be as successful as face mask hoarding," he said.

State majority owned Bangchak Corporation Plc announced its own solution to the bottle shortage by providing free hand sanitiser to motorists to put in their own containers at its 200 petrol stations in Bangkok, Nonthaburi and Samut Prakan.

An industry source who requested anonymity said the huge demand for hand sanitiser has opened a loophole to allow low-quality alcohol to be delivered to the market.

On Tuesday the FDA announced it revoked the licences of 24 brands and eight hand jelly makers on the market because the content of their alcohol was below 70%, the threshold to kill the virus.

A source who requested anonymity from the Office of the Cane and Sugar Board under the Industry Ministry blamed the shortages on complicated and redundant regulations on alcohol and ethanol producers.

He said the ministry's manufacturing operation permits (Ror. Ngor. 4) and ethanol fuel standards fall under the Energy Ministry, but when ethanol is converted to a sanitiser product, it falls under the regulations of the FDA and the Excise Tax Department.

"There is already too much red tape just to operate this business, so when there is a situation that requires a fast adjustment, there is no doubt why it took a very long time to convert ethanol into medical-grade alcohol," the source said.

The source said the process to convert ethanol for medical use requires many permits and reporting to the authorities.