Local smartphone sales are likely to register double-digit contraction if the coronavirus outbreak drags on until the third quarter of this year, says IDC Thailand, the local operating unit of global IT research firm IDC.

"The outbreak is threatening consumer spending and confidence in replacing new smartphones," said Teerit Paowan, an analyst at IDC Thailand. "Work from home measures are more beneficial for notebook sales than smartphones".

If the crisis ends in the second quarter, the market is likely to see flat growth, he said.

In the global market, devices capable of using 5G on the 2600-megahertz spectrum range are still expensive. IDC predicts more 5G smartphones will be rolled out in the fourth quarter, when local demand for smartphone replacements is likely to gather pace, Mr Teerit said.

He said SIM-locked phones that mobile operators bundle for Chinese smartphones at a price of 2,000-3,000 baht with postpaid data packages are courting the most demand.

From February to March, there was a shortfall for some smartphone models due to supply chain disruption, but the situation has returned to normal.

Low consumer confidence is shrinking demand for handsets, which should continue until the outbreak ends, said Mr Teerit.

"The subdued smartphone market might force some brands to exit the market," he said, including house brands of major smartphone makers. 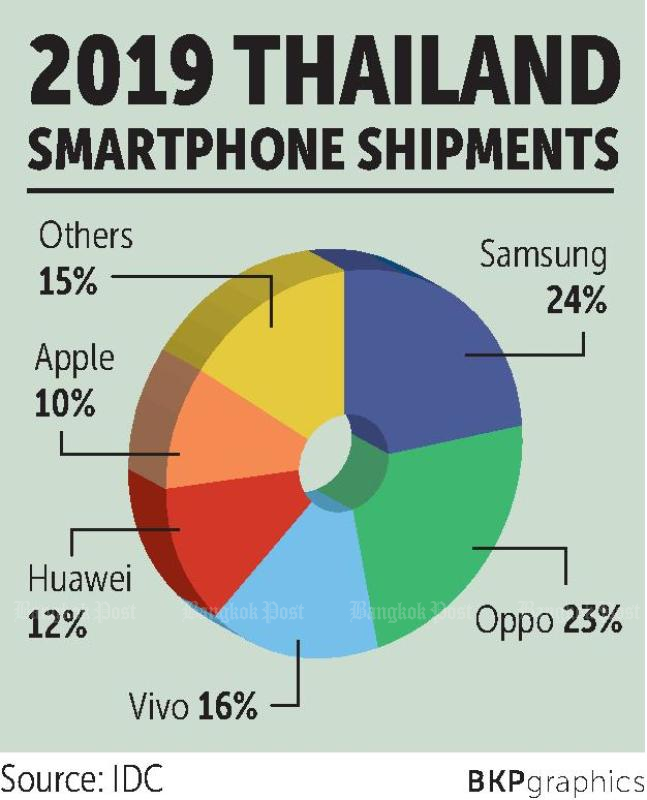 Some 18.2 million smartphones were shipped to Thailand in 2019, down 5.5% from a year earlier, according to IDC. Shipments of mobile operators' own branded handsets declined as they collaborated with global and China-based players to provide affordable devices with attractive plans.

Last year, Samsung smartphone shipments declined 5% in unit terms from a year earlier as the J series was phased out. The range had drawn high demand in 2018. The Korean giant focused more on the A series with competitive specs and prices last year.

Huawei plunged by 28% since new launches do not support Google services, while Apple surged by 22% due to higher shipments for the new iPhone 11, which has attractive prices because of the strong baht.