S&P Global Ratings has revised its outlook on Thailand to stable from positive on Covid-19 uncertainty, with a possible downgrade given heightening political uncertainty and persistent sluggish economic recovery. 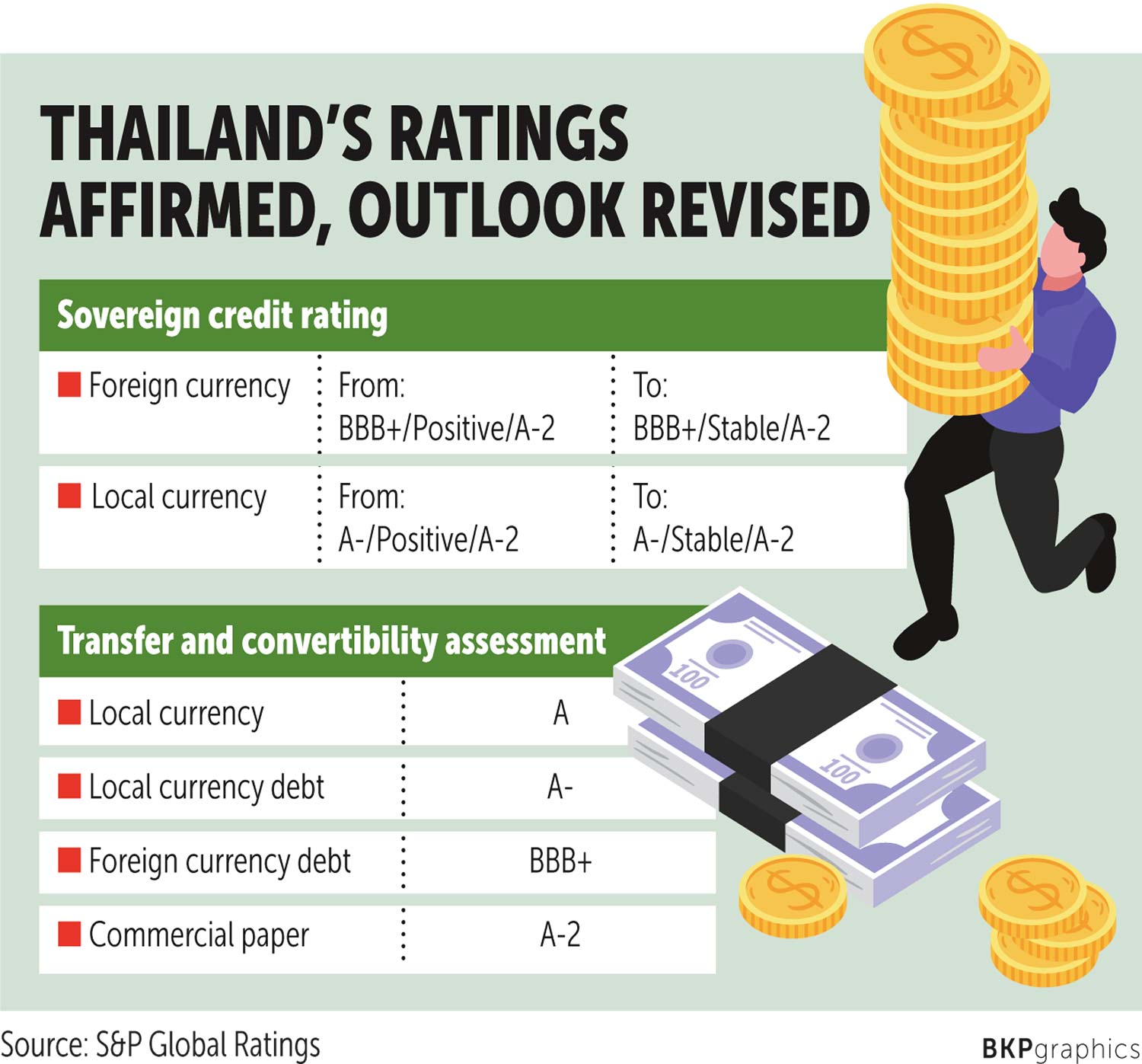 The firm, however, affirms the country's BBB+ long-term and A-2 short-term foreign currency sovereign credit ratings.

"We are revising our outlook on Thailand to stable from positive due to our expectations of slower political adjustments under the economic and social uncertainties associated with the Covid-19 outbreak," said S&P Global Ratings. "We expect Thailand's political transition under the elected government to be delayed during the Covid-19 outbreak-induced state of emergency."

The government has declared a state of emergency from March 26 to April 30, as Thailand has been struggling in its battle with Covid-19 transmission.

The government has also imposed a curfew, banning all people nationwide from leaving their homes from 10pm to 4am starting from April 3.

First, students and supporters of the now-defunct Future Forward Party have held small protests and gatherings since Feb 21, when the Constitutional Court ruled to dissolve the opposition party for violating election laws.

Second, the Democrat Party, which has about 50 seats in the ruling coalition, might reconsider whether to remain in the coalition.

"A potential departure by the Democrat Party would leave the coalition with a minority," Mr Tim said.

Thailand's stable outlook reflects the ratings agency's view that the Covid-19-induced economic uncertainty and the subsequent state of emergency could delay political transitions expected under the civilian government over the next 12 months.

"We may raise the ratings if there is greater certainty about the evolution of the multiparty parliamentary system in line with arrangements set out in the Constitution," said the international credit ratings agency. "Over time, we expect this to increase the responsiveness of the political system in addressing social demands and help to resolve longstanding political uncertainty in the country."

A downgrade is possible if the country's economic recovery is persistently slower and weaker than the agency's forecast, S&P Global Ratings said.

This could increase the pressure on the current policymaking process and raise the likelihood of abrupt political changes, it said.

"A severe economic fallout, coupled with the sweeping powers accorded by the emergency decree, can potentially disrupt progress towards putting in place political structures and policies to alleviate deep-rooted socioeconomic fissures across the country," the agency said. "These structural issues had been the source of political upheavals in the past."

Thailand's economy is projected to see a 2.5% contraction along with a 5% decline in exports, according to the ratings agency.

Government measures to alleviate the economic impact are expected to widen the fiscal deficit to 5.5% of GDP, raising net government debt to 31% of GDP in 2020.

But the country's strong external balance sheet and liquidity, reflected through continuous current account surpluses and high foreign reserves, will continue to underpin the rating, it said.