From Yesterday to Tomorrow: Reinventing Education in Thailand
Business

From Yesterday to Tomorrow: Reinventing Education in Thailand

When academics from a leading Bangkok university sought international partners to help equip Thai students for jobs in the new digital age, they visited a U.S. city that had once been a symbol of old economy “rust belt” decline.

Pittsburgh, Pennsylvania, had built its wealth on steel – an industry that by the 1980s was dying in America. But, thanks in large part to a world class local university, Carnegie Mellon (CMU), the city figured out how to replace the industries of yesterday with those of tomorrow, attracting companies such as Google, Apple, Uber and CMU’s own National Robotics Engineering Center, which commercializes technologies invented on campus.

Unlike in Pittsburgh, Thailand’s industries were not in decline. On the contrary, the Kingdom’s automobile and computer parts manufacturing sectors had become highly successful, making it the world’s 11th biggest vehicle producer in 2018, according to the International Organization of Motor Vehicle Manufacturers, and a key player in global electronics supply chains. But to achieve its ambition to become a fully developed nation by 2035, Southeast Asia’s second largest economy realized it, too, must leapfrog from traditional manufacturing into the innovation age and become a hub for artificial intelligence, robotics, biosciences, aerospace and other new pillars of what is frequently termed the world’s fourth industrial revolution.

Critically, that required universities and vocational schools to sharply lift their standards to research and teach the new skills required.

For King Mongkut’s Institute of Technology Ladkrabang, (KMITL), based on Bangkok’s eastern outskirts near Suvarnabhumi International Airport, part of the answer was to team up with Pittsburg’s CMU. And this year CMKL University, a joint venture between KMITL and CMU, launched its first masters and doctoral programs in computer and electrical engineering. “Many companies moved to Pittsburgh to be near CMU and now we are bringing CMU to Thailand,” says Dr Supan Tungjitkusolmon, President of CMKL University. “Together we can create a new collaboration between industry and academia.”

KMITL’s deal with CMU is just one example of Thailand’s efforts to upskill its workforce through human resource development and incentivize foreign investors and some of the world’s best academic and vocation training institutions to supply critical support.

The scale of that collaboration is potentially immense. The nation’s economic vision, known as Thailand 4.0, is to create the digital hub of Southeast Asia in a $50 billion high tech zone covering three provinces outside Bangkok that’s known as the Eastern Economic Corridor, or EEC. But to achieve that goal, the country will need to fill 475,000 new jobs by 2023 in the EEC alone. Of these, just under half will require a bachelor’s degree or higher and the rest increasingly sophisticated vocational skills. 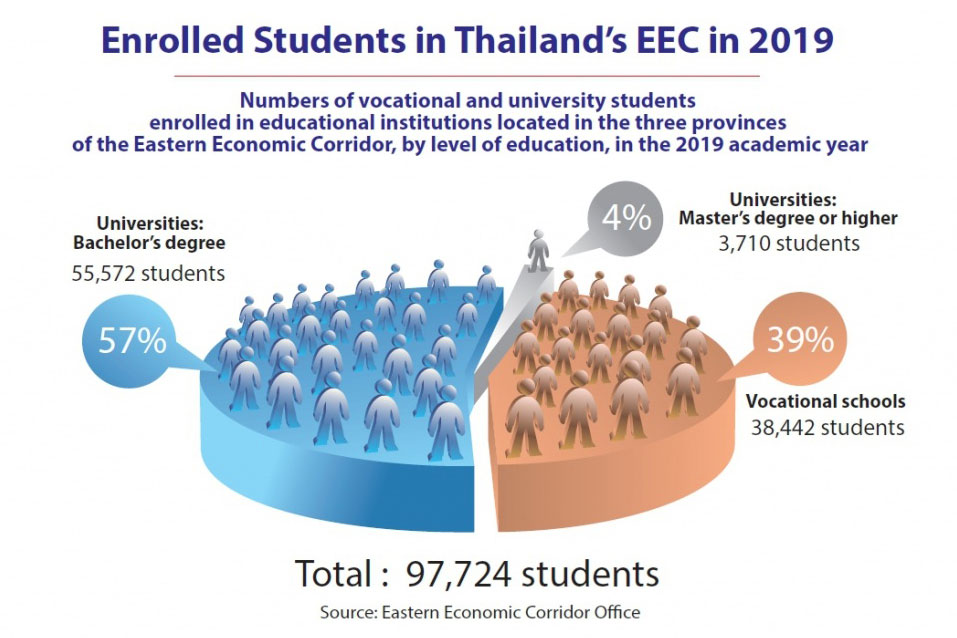 To meet the challenge, the Thai government has launched a series of strategies. In May, it merged four separate government departments into a new Ministry of Higher Education, Science, Research and Innovations, which aims to work closely with the private sector in Thailand and overseas to increase research and human resource development (HRD).

The BOI also offers so-called SMART visas that enable foreign investors and their families, as well as key talent in business, science and education, to enjoy privileges that include residing in the country for up to four years without needing to obtain a work permit.

“We want to ensure a perfect match between demand and supply,” says Ms Duangjai Asawachintachit, Secretary General of the BOI. “This agreement reinforces the BOI’s facilitation role in fostering cooperation between business and academics to increase research and development in Thailand and to strengthen our manufacturers’ competitiveness in key technologies.”

These recent initiatives are adding momentum to an already identifiable trend. In the five years to 2017, Thailand’s spending on R&D doubled to 1 percent of GDP and the government aims to raise that to 1.5 percent by 2021. This year, Thailand jumped five places to 25th in Switzerland-based IMD Business School’s annual global ranking of the world’s most competitive economies. The Kingdom was also placed first among the nine countries that form the Association of Southeast Asian Nations, or ASEAN, on the UN’s 2019 Sustainable Development Goals, which include quality education.

Collaboration between local and foreign educational institutions and the private sector is certainly gathering speed. In addition to the CMKL joint venture, Bangkok’s Thammasat University and Amata University in the EEC have both partnered with National Taiwan University while Vidyasirimedhi Institute of Science and Technology, which is funded by Thailand’s biggest company, Fortune 500-ranked PTT, is in collaboration with leading Japanese, Korean and European educational institutions with the aim of becoming a world class university and center of cutting-edge innovation.

Significantly, Thailand’s education reforms stress the importance and status of vocational studies. One of the best examples is a collaboration by KMITL with Japan’s National Institute of Technology to open a tertiary engineering school offering world class vocational training provided by the Japanese KOSEN technical college system.

KOSEN-KMITL, as it is known, teaches a five-year course from age 15 that produces engineers qualified in mechatronics, a combination of electrical and mechanical engineering that is required in both robotics and AI.

Japan is the biggest foreign investor in Thailand and graduates are expected to mostly join the Japanese companies that are moving into the EEC. Classes are held in English and Thai, with Japanese added in year three. The first batch of 24 students was chosen from more than 300 applicants from all over Thailand. A second KOSEN institute, known as KOSEN-KMUTT) will open at KMITL’s sister campus, King Mongkut’s University of Technology Thonburi, next year.

KOSEN-KMITL Associate Professor Dr Komsan Maleesee says that by choosing to work with two universities, Japan’s National Institute of Technology will raise the status of technical education in Thailand. Graduates will also have the opportunity to complete an additional two years study to gain a full university degree. “We plan to send all of them to further their studies in Japan to inspire future generations,” he says.

Thailand’s educators and businesses are also tapping European vocational expertise. One of the world’s leading education companies, UK-based Pearson, is working with the EEC to develop career-focused programs that offer BTEC diplomas awarded by Britain’s Business and Technology Education Council.

With such a strong commitment to human resource development, Thailand’s target of boosting innovation-focused foreign investment and achieving developed nation status by 2035 is looking increasingly attainable.