Mad dash to cash in on gold spike
Business

Mad dash to cash in on gold spike

A long queue forms in front of the gold shops situated on Yaowarat Road, Chinatown on Wednesday. (Photo by Pornprom Satrabhaya)

Thailand's net gold exports of 18,052 kilogrammes in February and 17,638kg in March outpaced the total volume in 2019 of 13,528kg, indicating a mad rush to sell the metal, while the lopsided market has compelled some goldsmiths to temporarily shut down for fear of a cash shortage.

A gold dealer estimated the volume could jump to tens of hundreds of kilogrammes in March and April after gold prices hit a seven-year peak propelled by concerns over the escalating pandemic.

According to Commerce Ministry data, gold outbound shipments for the first two months this year of 51,994kg more than tripled the import volume of 16,304kg. Gold export value amounting to 78.8 billion baht during January to February also far exceeded imports at 20.5 billion.

Gold imports-exports are used as indicators of buy-sell movements for the domestic market as Thailand's goldsmiths, as a normal practice, buy the metal from locals and sell outside the country to cash out.

Jitti Tangsithpakdi, chairman of the Gold Traders Association and owner of Chin Hua Heng Goldsmith, said sales volume at his company amounted to 200 million baht on Tuesday, which could mean billions for the sum of all goldsmiths on Yaowarat Road.

"Don't unload gold all at one time as huge sums can mean hundreds of billions of baht, and no goldsmith can tolerate that selling pressure," he said.

The gold price spike to a seven-year high has prompted a wild selling spree as some rush to sell the precious metal to raise cash as the pandemic spreads, impacting businesses and the economy as gold hoarders cash in.

People standing patiently in queues stretching hundreds of metres to reach goldsmiths' counters to sell the metal for cash has become a common sight on Bangkok's Yaowarat Road, home to major goldsmiths.

The one-sided selling in the domestic market and difficulties to export gold after most flights have ceased and lockdown measures are adopted in some major gold markets have forced some goldsmiths to halt their operations for fears of cash flow shortage.

Most of the gold sold is bullion, reflecting that sales have been for profit as gold bar is normally used for investment, said Mr Jitti.

In Thailand, the gold price has risen by 6,000 baht since the beginning of this year, and the baht's weakness against the US dollar gave local sellers a windfall.

"I understand many sellers held gold for 4-5 years and cashed out after the price hit the seven-year high. Goldsmiths in Thailand are still open to serve customers and help people who want to turn gold into cash for daily expenses. But if you're not in [financial] trouble, I suggest gradually selling as the gold price is expected to keep rising," he said.

On Wednesday to serve customer demand, Hua Seng Heng resumed operations at one more branch after two of its four branches on Yaowarat Road closed to comply with the government's social distancing policy.

"No one wants to snap up gold, but customers have come to pull out money," said Mr Jitti. 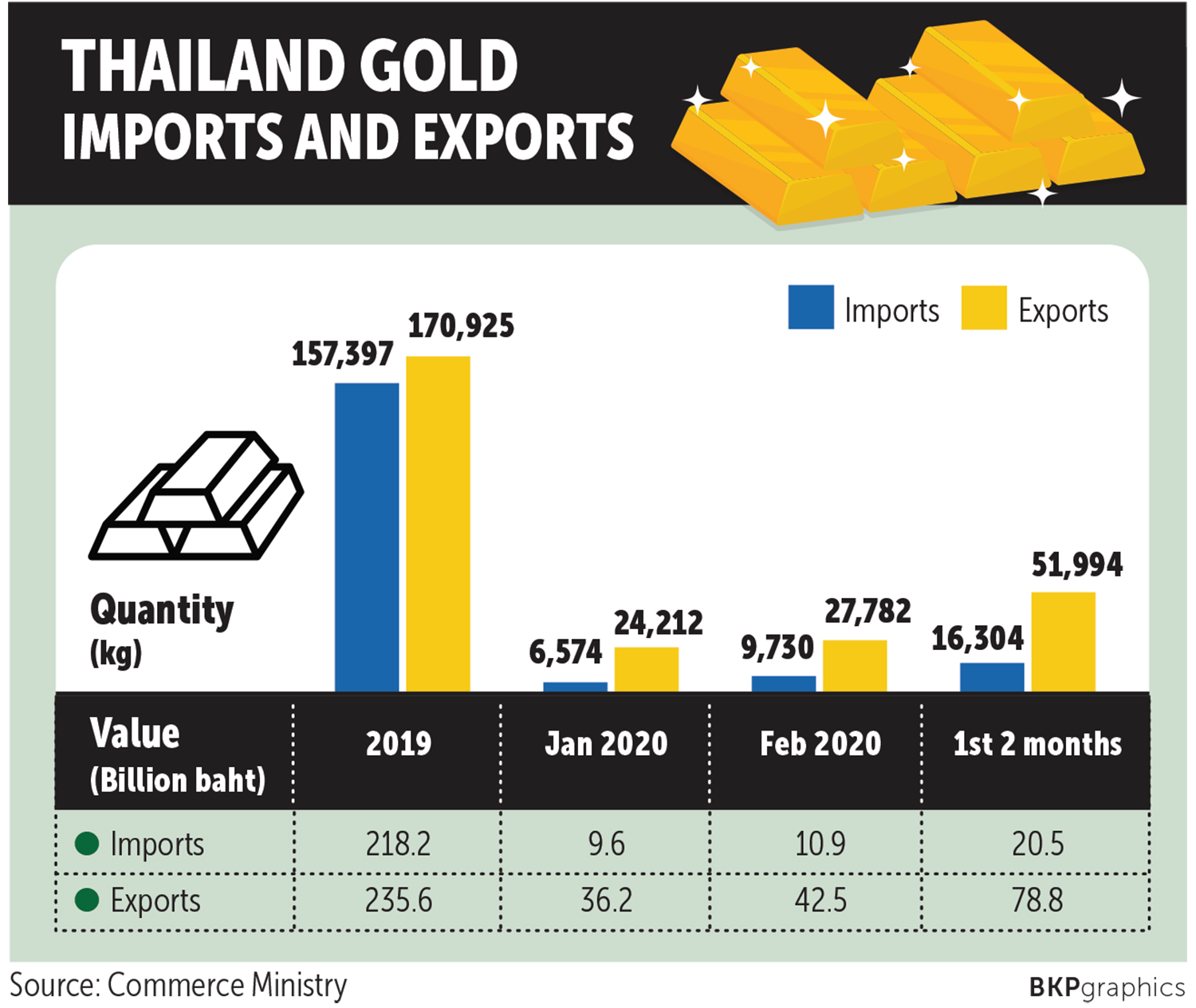 Widespread concern that the pandemic will have a devastating effect on the global economy has pushed up gold prices to above US$1,700 an ounce or around 26,000 baht per baht-weight of gold.

"Retail customers may put their gold up for sale to hold cash as work from home measures could cause some financial hardships," he said. The long lines in front of Hua Seng Heng's branches could also be due to the company's adoption of social distancing practices to prevent the spread of the virus.

"If we buy from [local] customers and export immediately, we will get cash immediately but there's only a handful of flights. We are using our own money to support customer sales," he said.

With sales demand at a fever pitch, the company's cash reserve at branches is occasionally insufficient and payments by cheque are being made to prevent sellers from waiting for banks to transport additional cash, said Mr Tanarat.

"This is not the usual environment. Typically some people buy gold when prices are rising but one-sided selling exclusively has been the trend since the last two days of March," he said.

The number of users opening online gold trading accounts at Hua Seng Heng has also jumped as some switch from following the stock market and others prepare for a potentially long lockdown at home, he said.

Apart from branches, the company offers two online channels via an e-store and the Line app for customers who want to trade gold through delivery services in Greater Bangkok.

Mr Tanarat said many countries have plans yet to pump more liquidity to shore up their economies. Gold prices will keep rising if liquidity rises.

A gold seller who did not want to be named said that she and a friend spent around one hour in queue.

"I sold gold to cash in profit. I bought it several years ago at about 23,000 baht per baht weight of gold and the surge in gold price brought the opportunity for me to cash out," she said.

The coronavirus outbreak and official orders to close businesses as part of social distancing to combat the contagion have also pushed cash-strapped people to resort to pawning valuables in exchange for quick cash.

The rate of unredeemed non-gold pawned items at Tungthanasin increased to 6% in the January-to-March quarter from 5% last year, said managing director Sittiwit Tangthanakiat. 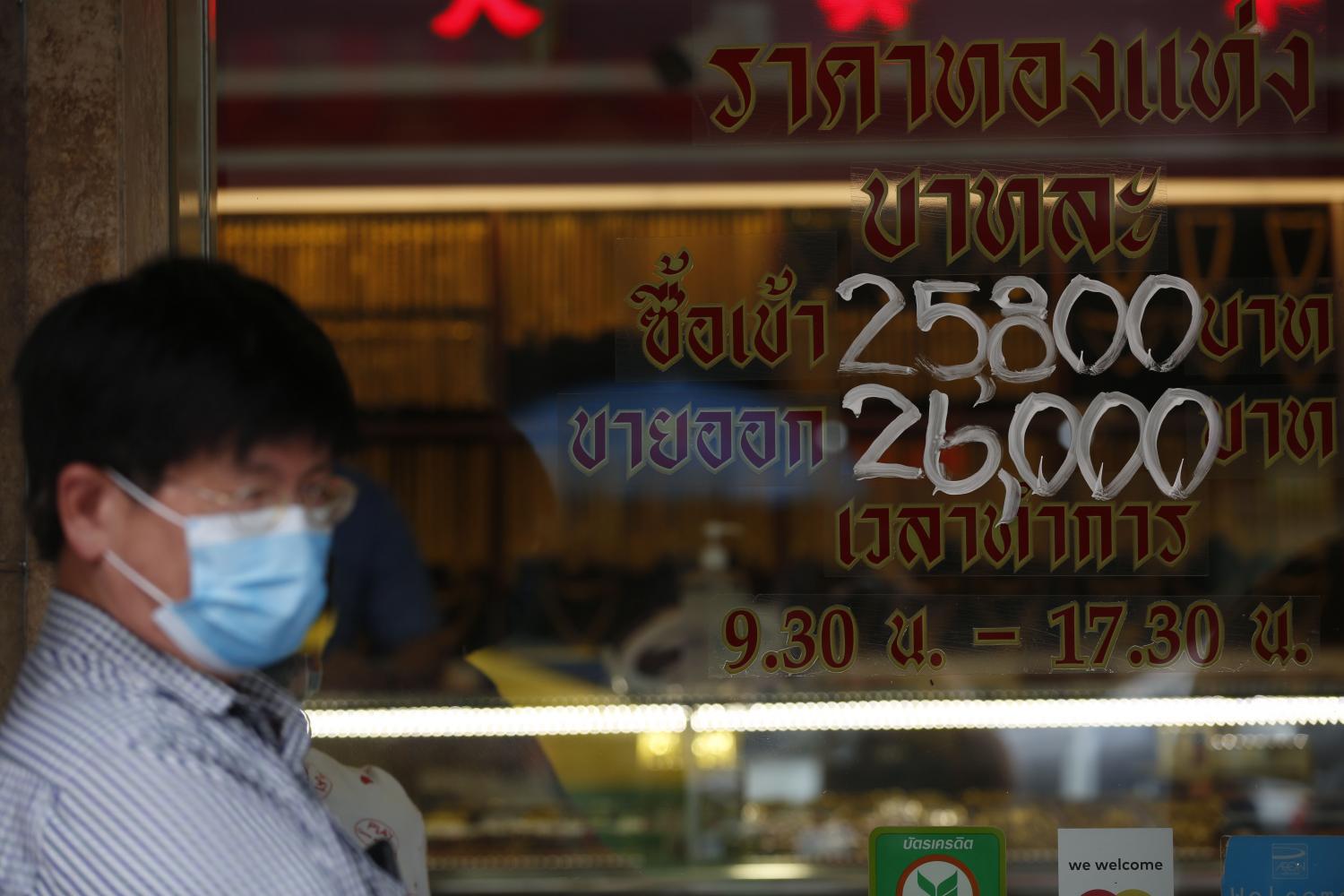 Gold prices for the day on a shop window yesterday. Pornprom Satrabhaya

Tungthanasin is the country's largest privately owned pawnshop network, with branches in 28 provinces under the Easy Money brand.

The coronavirus is dealing a serious blow to the company's customers, most of them entrepreneurs, small merchants and retail customers, Mr Sittiwit said.

The pawnshop chain automatically extended the redemption period for one month to six from five months for those who pawn their assets for loans during February to July to alleviate customers' burden.

Gold bars and ornaments are the most popular pawned items, dominating 75% of the total transaction volume and value, followed by jewellery (20%) and wristwatches and luxury items (4%). IT and other goods make up the rest.

The number of people using pawnshop services has declined slightly, Mr Sittiwit said, but this could be because of the government's social distancing policy.

"Our staff is divided into two teams," he said. "Those who do not deal with customers work from home for few weeks while the front office continues to serve customers at branches, where staff are required to measure body temperature, maintain distance between customers and employees and hourly cleanings are carried out."

To let customers pay interest via the online channel, the company launched the Easy Smart application for three branches in Pathum Thani province in a pilot project and will extend the service to all 50 branches in 28 provinces nationwide as soon as possible.

"We are happy to use our custody expertise to help people weather the crisis if the government provides funding support," Mr Sittiwit said.

"In that event, we won't charge interest on top of the rate set by the government and the government will certainly get back the full principal when the scheme ends."