A truck loaded with freshly harvested sugar cane heads for the mill. Sugar-cane production from Dec 1, 2019 to Feb 15, 2020 stood at 7.4 million tonnes. (Photo b Thanarak Khunton)

With Thailand in the midst of its worst drought in four decades, sugar production is falling significantly for this year's crop cycle, pushing up the price of sugar globally and placing a severe strain on the domestic industry.

Ekapat Wangsuwan, secretary-general of the Office of Cane and Sugar Board (OCSB) under the Industry Ministry, said production costs have risen in Thailand due to the drought, while the lower supply of sugar cane worldwide is putting pressure on global prices. 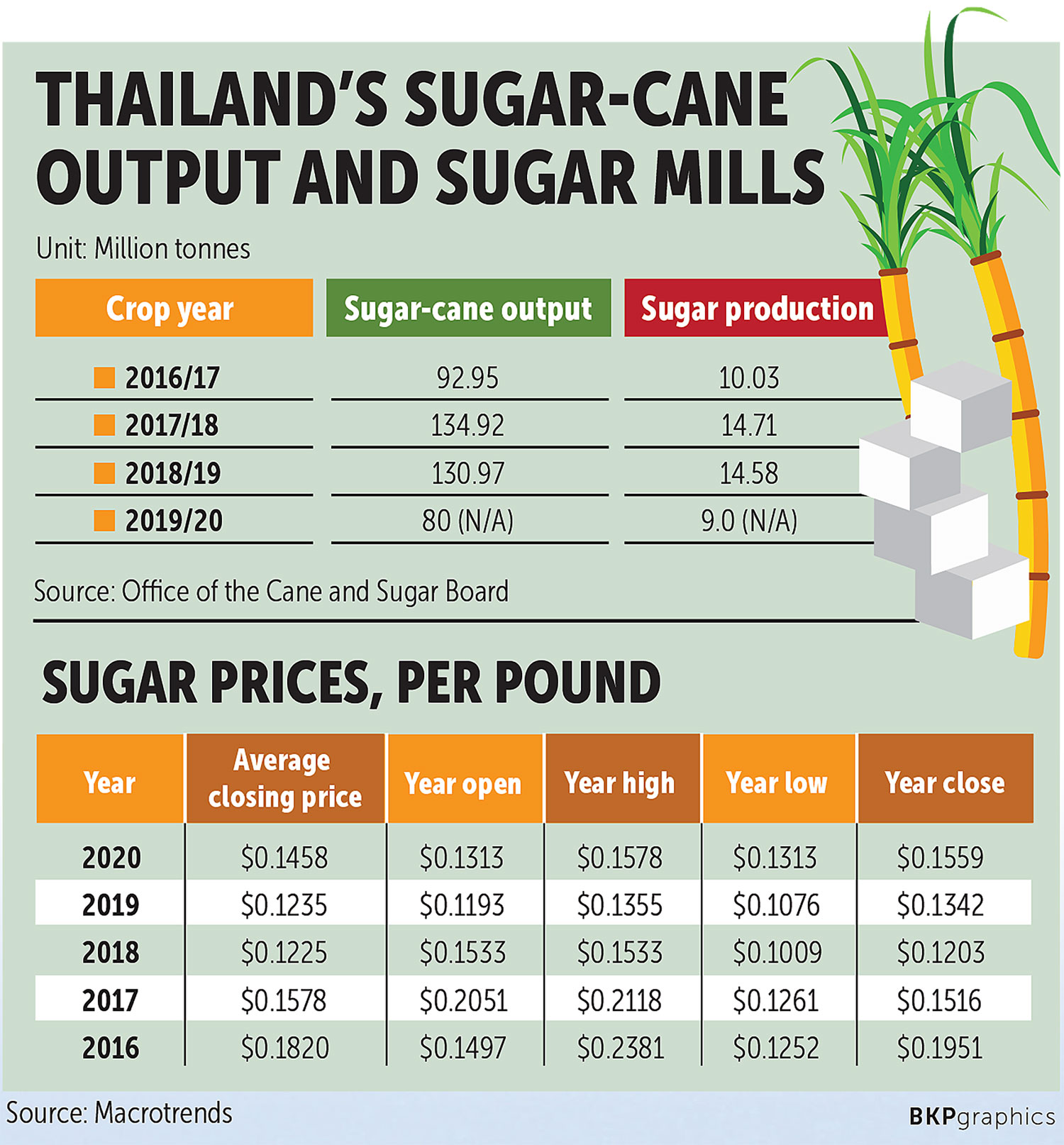 Thailand is the world's fourth-largest sugar producer and the second-largest exporter, trailing only Brazil. The country has 57 sugar mill factories with a capacity of 983,587 tonnes a day and sugar-cane plantations in 47 provinces spanning 11.4 million rai.

"The drought crisis has reduced sugar-cane output and sugar mill exports, while it pushes up global sugar prices," Mr Ekapat said. "But Thailand's exports from sugar mills are down."

TSMC is concerned that the drought will cut sugar-cane output and cane yields.

"If the dry spell lasts beyond July, it will cause a severe impact on the country's sugar business," Mr Siriwut said.

His expectation is for sugar-cane output in the crop year 2019-20 to fall below 80 million tonnes of sugar cane and production from sugar mills to be 9 million tonnes due to the drought.

But sugar is a controlled product for which the government manages supply and demand to prevent disruption in supply.

"For this year's crop, the sugar mill prices in the global market are above 15 cents per pound, which is a good sign for the sugar industry but it's bad luck for sugar producers that cannot export more because the supply is less," Mr Siriwut said.

In India, there is also a reduction in sugar-cane output due to drought, so production has shifted from cane juice and molasses to ethanol.

In Brazil, drought conditions have affected sugar-cane production, ageing the sugar cane and causing farmers to switch to producing biofuel. 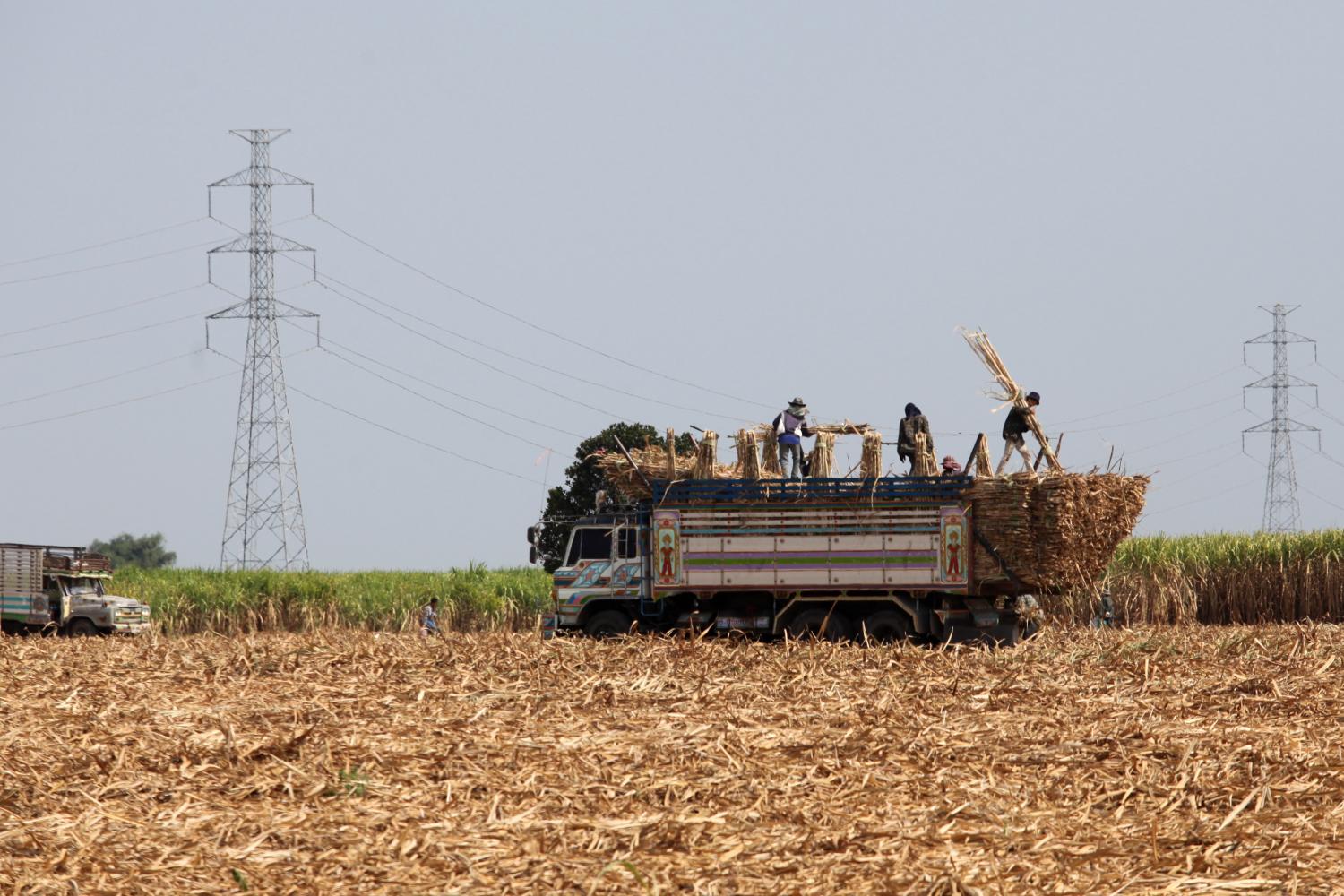 Liap Booncheung, president of the Institute of Northeastern Sugarcane Planters, said the drought has severely impacted the sugar business and sugar-cane plantations in Thailand.

The drought could result in a loss of sugar-cane output for this crop year, as output of 15 tonnes per rai drops to 7 tonnes and in some areas drops to 3 tonnes per rai from 10 tonnes.

Most sugar cane is produced in the Northeast, and if rainfall continues to be below normal during the monsoon season, next year's crop yield could be even worse.

"The dry season started in November and usually lasts through April, although this year the government says it could persist into June," Mr Liap said.

The association is calling on the government to support and help sugar-cane farmers and is cooperating with local authorities to find assistance for the sector.

"The drought has impacted the agriculture sector around the world and in Thailand, where the dry season affected sugar-cane output and the sugar business, the worst in more than a decade," Mr Issara said.

He said total revenue in 2020 will drop by 25-30% or well below last year's revenue of 6.99 billion baht, due to lower production output as a result of the drought.

"It's not a good year for the sugar-cane industry, even though the dry season this year is putting pressure on global sugar mill prices to increase by around 15 cents per pound," Mr Issara said.

The crisis has reduced sugar-cane output and sugar mill exports, while pushing up global sugar prices, but Thailand's exports from sugar mills are down this year due to low consumption globally.

KBS plans to cope with the drought by increasing the production yield of sugar cane because the company thinks it will promote sustainable growth in the long term.

The company aims to expand its sugar-cane plantations next year because more land will contribute to higher consumption of sugar cane and sugar milling.

KBS has also diversified its business into renewable energy domestically and overseas.