Most SET-listed commercial banks in the first quarter remained resilient amid the floundering economy, while building higher provisions for expected loan losses from rising bad debt as new financial reporting standards are adopted and the coronavirus spreads. 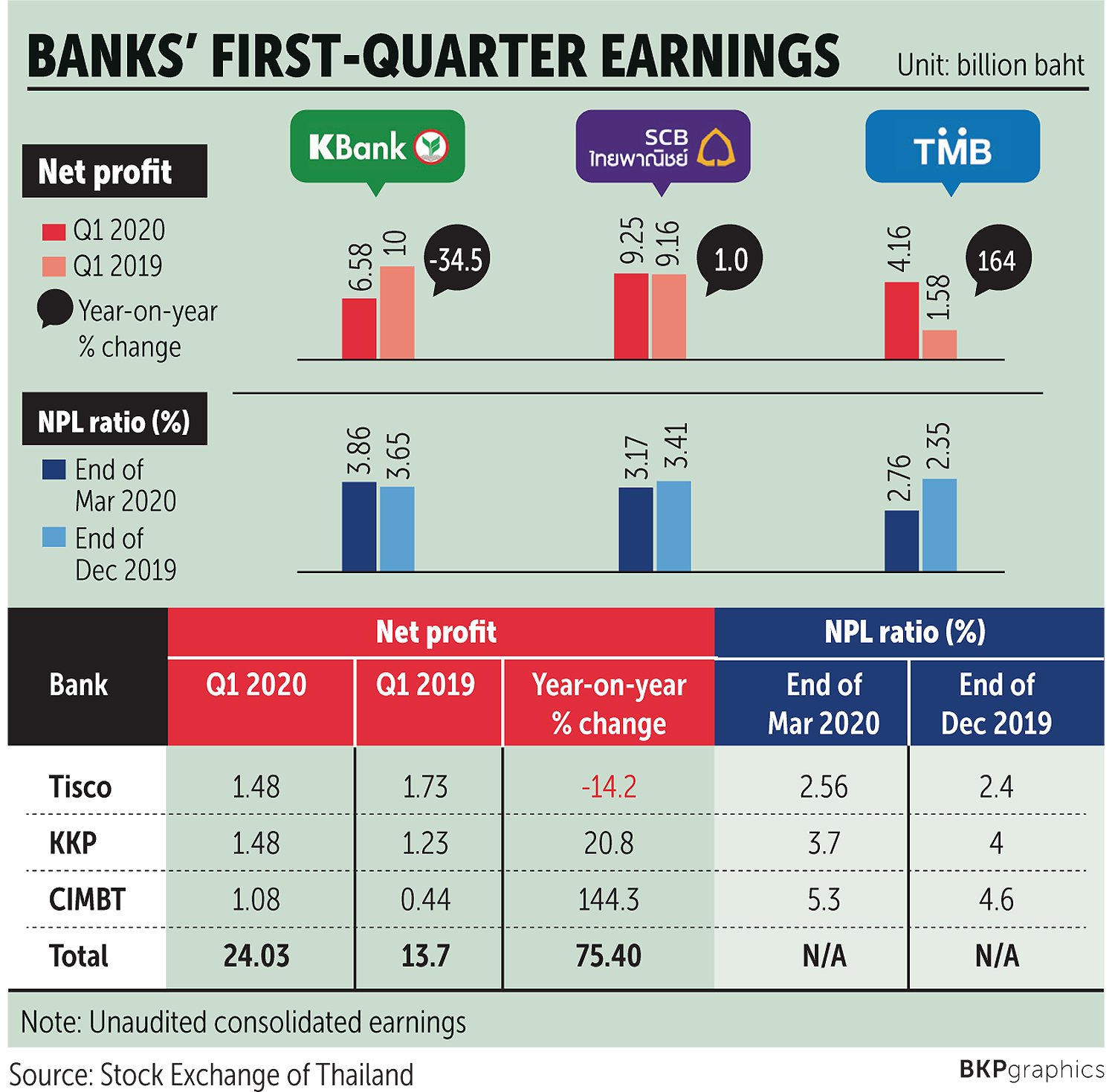 At time of press, quarterly earnings for Bangkok Bank, Krungthai Bank, Bank of Ayudhya and LH Financial Group were unavailable.

TMB Bank posted a 164% year-on-year surge in net profit to 4.16 billion baht, compared with 1.56 billion baht in the same period of 2019 when Thanachart Bank's net profit was not counted. TMB is consolidating with Thanachart.

Among the top four banks, KBank saw unaudited consolidated net profit fell by 34.5% from a year earlier to 6.58 billion baht for the January-to-March quarter, mainly due to higher loan impairment charges and other operating expenses and a sharp decline in non-interest income.

The bank has set aside provisions for expected credit loss to the tune of 4.29 billion baht for the three months to March, compared with 7.58 billion baht for loan-loss reserves in the same period of 2019, according to a filing with the Stock Exchange of Thailand (SET).

"KBank has set aside higher expected credit loss from 4.29 billion baht in the preceding period, with prudent consideration of factors in line with uncertainties from the continued economic slowdown," the bank said.

Thai banks started to adopt TFRS9, a new standard requiring them to put aside provisions based on expected credit loss at the beginning of this year.

Other operating expenses increased by 9.2% from 2019 to 17.5 billion baht on debt management expenses, IT-related expenses and marketing expenses, resulting in a cost-to-income ratio of 49.31%.

Siam Commercial Bank (SCB) said net profit rose 1% from a year ago to 9.3 billion baht for January to March as an 8.9% top-line increase and an 8.1% decline in operating expenses negated higher loan impairment charges amid heightening economic uncertainties.

The bank's loan-loss provision soared by 79.4% from 2019 to 9.7 billion baht in the three months through March, not only to cover new non-performing loan (NPL) structures but also to comply with the new accounting standard on asset impairment in the economic downturn.

CIMB Thai Bank (CIMBT) posted a 144% year-on-year jump in first-quarter net profit to 1.08 billion baht, thanks to a 16.8% increase in operating income and a 38.8% decline in expected credit loss provision, the bank said in a filing with the SET.

The bank's net interest margin dropped to 3.31% for the three months through March from 3.45% a year earlier as interest income from investments shrank.

JAKARTA: Indonesia has suspended exports from Indonesian seafood company PT Putri Indah into China after its frozen fish products tested positive for the coronavirus, the country's fisheries ministry said in a statement on Saturday.

Prayut thanks all concerned for cooperation

Prime Minister Prayut Chan-o-cha thanked government officials and the people for their cooperation in maintaining law and order during the rally of the United Front for Thammasat and Demonstration which ended on Sunday morning, government spokesman Anucha Burapachaisri said.