Easing the restrictions to contain the coronavirus outbreak seems to be a gamble the government has to make, since businesses could be wiped off the radar on Wongnai and other lifestyle super apps. But the move could be a make or break for the masses, and a second wave of the disease remains a key risk with the stakes too high for failure.

There are concerns that Thailand could be vulnerable to a renewed outbreak because the beginning of the rainy season in June often leads to higher instances of the flu.

With cases of new infections and deaths subsiding day to day, the government has allowed the reopening of six types of businesses since May 3, such as markets and small eateries but not malls, in the first stage of relaxation of disease-control restrictions.

The easing applies nationwide, and provincial governors may not loosen restrictions in their provinces beyond what was announced.

The 10pm-4am curfew remains in place, along with constraints on international travel. The government also recommends working from home and minimising inter-provincial travel.

The government plans four stages of relaxation, which will take two months for the full reopening of activities, provided the number of new cases is manageable.

But if new cases soar, the relaxation will be revoked.

Easing some lockdown measures is essential to rebuilding the economy after the government announced it would continue the lockdown and curfew for another month, said Supavud Saicheua, adviser to Kiatnakin Phatra Financial Group.

For Thailand, the challenge is how to unwind the lockdown measures and handle the number of infections within the capacity of the country's public health system, he said. 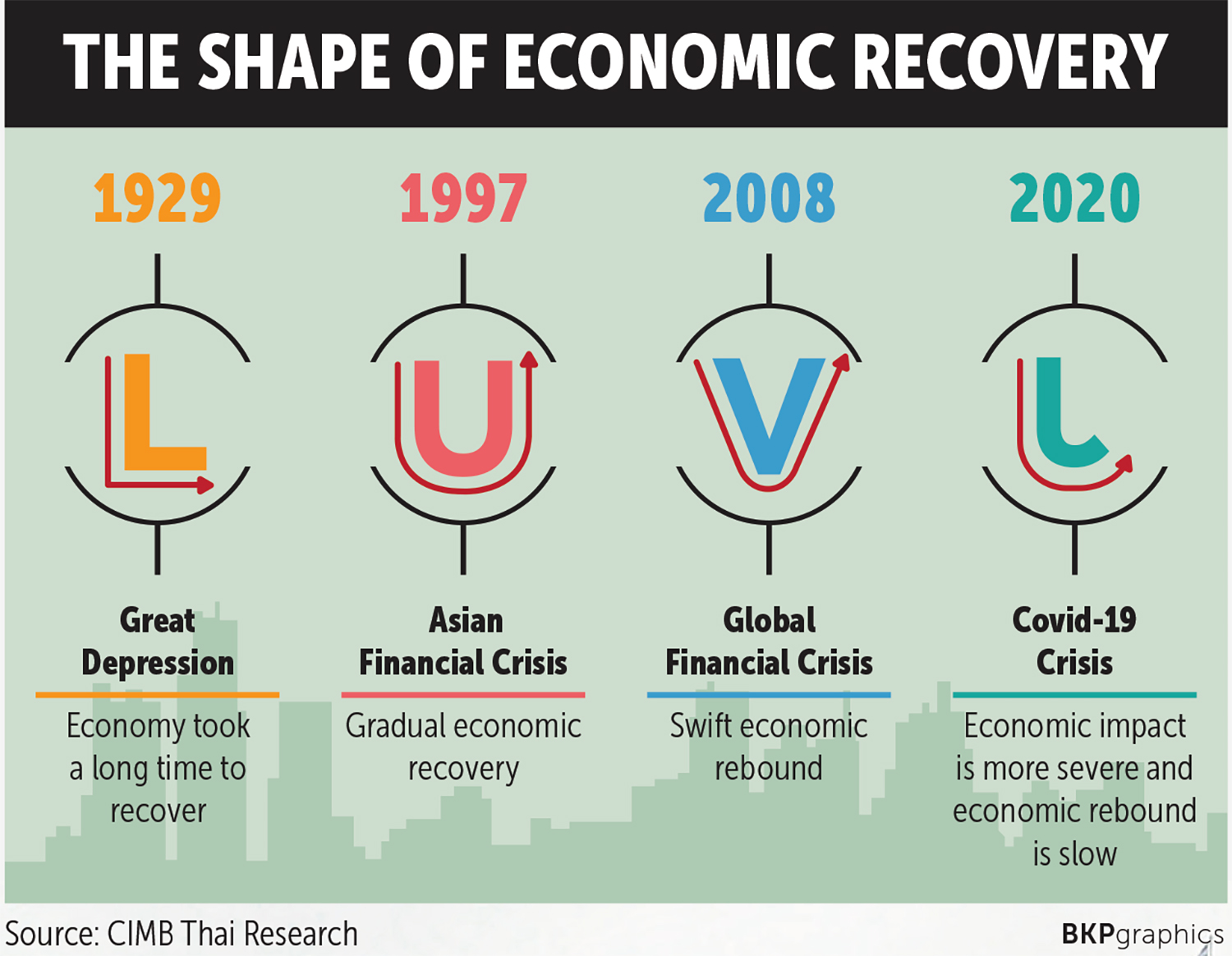 The aviation industry faced the first headwind of the coronavirus at the end of January, when China was the first country to announce a border lockdown.

Airlines in Thailand, with 25-30% of their revenue coming from the China market, had to stop flights to the mainland abruptly. But the nightmare carried on with the panic wave in February that saw further cancellations for other major destinations -- such as South Korea and Japan -- which also reported high numbers of infections.

The nosedive continued in March when the only engine -- the domestic market -- was on pause due the announcement of a lockdown in many provinces, followed by the emergency decree nationwide and ban on incoming flights.

The whole month of April, most aircraft were left stranded at Don Mueang and Suvarnabhumi airports. Many carriers decided to suspend domestic and international flights.

Santisuk Klongchaiya, chief executive of Thai AirAsia (TAA), said that under the circumstances in which the emergency decree has been extended for a month, airlines cannot get back to full operations.

Although TAA resumed some domestic flights on May 1, those routes are likely to serve more necessary purposes than leisure travel, and there are many new rules and regulations for carriers to follow. The restrictions have made it impossible to hope for a return to normal as airlines still have to monitor the situation closely.

"We have to comply with the official announcements and use the services in May to test the demand of the market first," Mr Santisuk said. "We have to be cautious about launching any promotions and marketing campaigns now, as the situation is still unstable and a second wave is unpredictable."

TAA is among eight airlines in Thailand seeking soft loans from government banks with the hope of extending the lifeline for longer than three months and preparing for another unpredictable wave that may follow.

While airlines are trying to control budgets and maintain jobs for employees with salary cuts, some airlines -- like Thai Lion Air (TLA) -- are unable to carry the workforce burden and have slashed hundred of jobs in recent months.

Nuntaporn Komonsittivate, head of commercial operations at TLA, said the first wave of the pandemic taught lessons to airlines. When returning to the sky this month with some domestic routes, it pledges to comply with distancing practices regulated by the Civil Aviation Authority of Thailand.

As the related authorities have implemented intensive measures to battle the virus and strictly limit travel activities in the last few months, TLA is hopeful that the responsible organisations will not let the second wave hit the country as hard as before.

"Everybody has learned from the past, and now we have a protocol to follow," Ms Nuntaporn said. "If the pandemic strikes again, we are confident that the prevention is ready."

Meanwhile, Raj Tanta-Nanta, deputy chief executive of Nok Air, said the second wave of the pandemic may not happen in Thailand, as there are several case studies from other countries that both state agencies and Thai people will learn from and strictly follow the health and hygiene guidelines to avoid repeating the same mistakes.

Although he did not dismiss the possibility that a second wave of pandemic could come from the outside, efficient management by the local government and health authorities will help contain the virus from spreading within the country.

But if the country is not fortunate enough to avoid the second wave, Thai tourism will be hit, creating a wider impact on the tourism supply chain.

The damage to the overall tourism industry could be even more destructive.

Mr Raj said the business recovery may be slower than in the first wave because most tourism-related operators already face the critical problem of liquidity and cannot continue longer than a few months ahead.

"If the second wave of coronavirus occurs or the government has still not eased the current restrictions during this time, it will lead to higher unemployment and cause severe economic fallout that will make it hard to keep afloat," he said.

During the first wave of the pandemic, Nok Air came up with more effective cost-saving management to keep the airline going until the end of the year, including negotiating delayed payments for fixed costs such as aircraft.

If there is another round of the virus, laying off employees will be a last resort, Mr Raj said.

This is the last thing airlines want to do, as it's difficult to find staff with unique skills in aviation.

Amonthep Chawla, executive vice-president and head of research at CIMB Thai Bank, voiced concerns that the economic downturn from the crisis could rival that of the Great Depression, whose magnitude was worse than the 1997 Tom Yum Kung crisis, as contagion-induced woes will strengthen anti-globalisation forces.

The latest crisis is like no other and could be a reverse J-shaped recovery, he said.

"Amid the crisis that we don't know how long will last, we'll see a substantial change and we need to adapt to catch up with trends, otherwise we could lose the economic war though we'll win the fight against the virus," Mr Amonthep said. "GDP will expand at a slower pace than in the past for a long time, creating a reverse J-shaped recovery: steep decline, extended period for economic recovery and slower growth in post-crisis period."

The crisis erupted as the country's economy was already expanding below growth potential, hampered by structural problems such as weak domestic purchasing power, US-China trade tensions that caused a slump in the manufacturing sector, the delayed fiscal budget and widespread drought, while the tourism sector was the only bright spot at the time.

Reshaping global trade and investment could trigger anti-globalisation sentiment as every country must rely more on the domestic front for economic restoration. Some nations could adopt trade barriers such as taxes and import restrictions, Mr Amonthep said.

These measures are a boon in the short run but would have ramifications for the global economy in the long term, he said.

"Thai investors should rest on local content while global trade is slowing down to boost their production efficiency," Mr Amonthep said. "Workers should be flexible and adapt to the fast-changing technology, as it's a war we won't know when will end. We will see dramatic changes, and we need to catch up to avoid losing the economic war."

One is if people relax the social distancing measures already in place, and the other is weather as Thailand enters the rainy season.

"We don't know about the seasonality, how the humidity, less sunshine and rain is going to affect us," Mr Salhani said. "From what I read, the vaccine should take another year [to be developed], and during that time there are chances that social distancing measures may decrease. As soon as that happens, we will definitely see a second wave -- the question is how significant it is going to be." 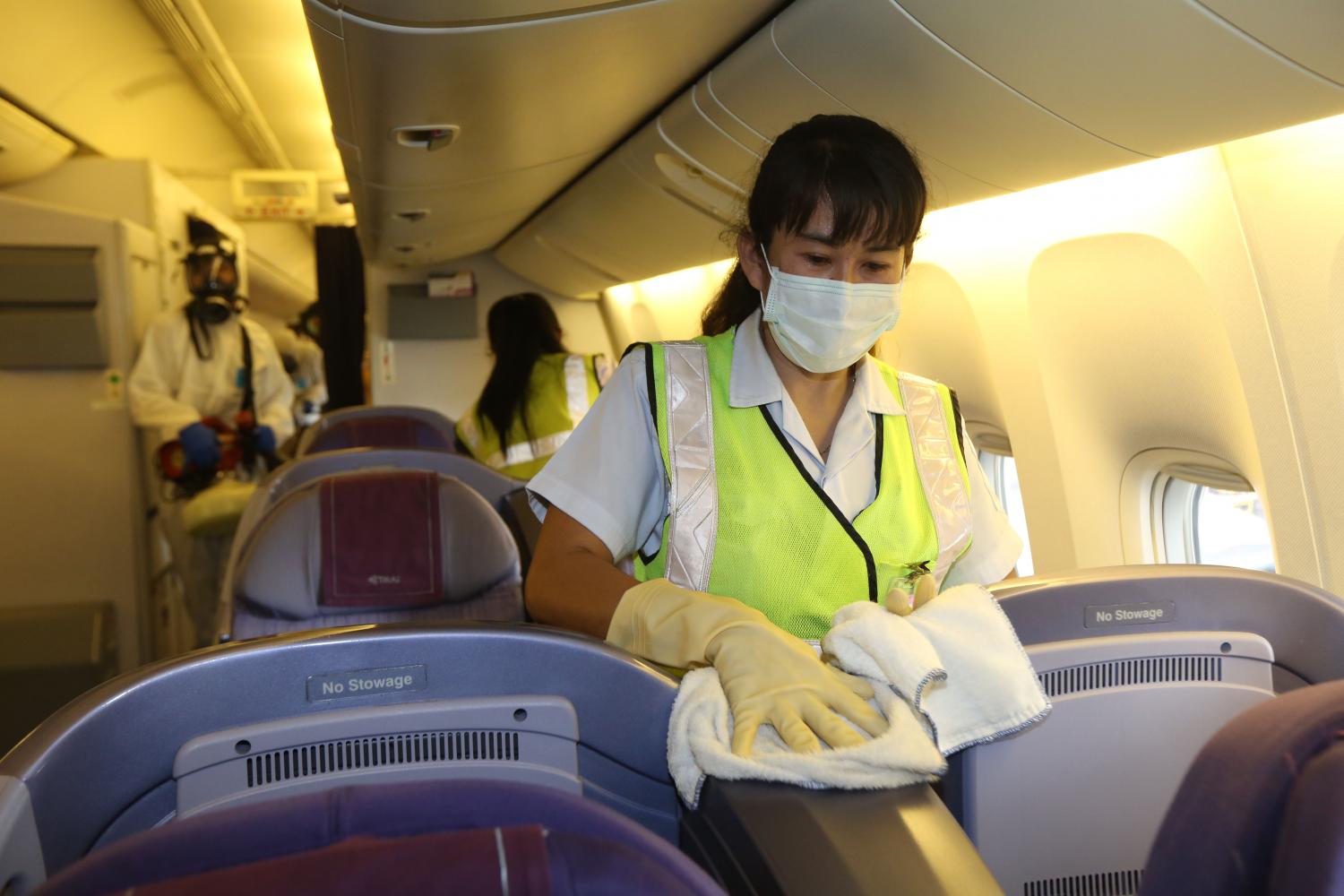 A cleaner sanitises seats in a Thai Airways international aircraft as a precaution to curb coronavirus spread. Varuth Hirunyatheb