The Bank of Thailand cut the policy rate yesterday by 0.25 percentage points to a fresh record low of 0.5%, saying it is ready to use additional policy tools to soften the economic blow while downside risks to the country's economy this year remain high. 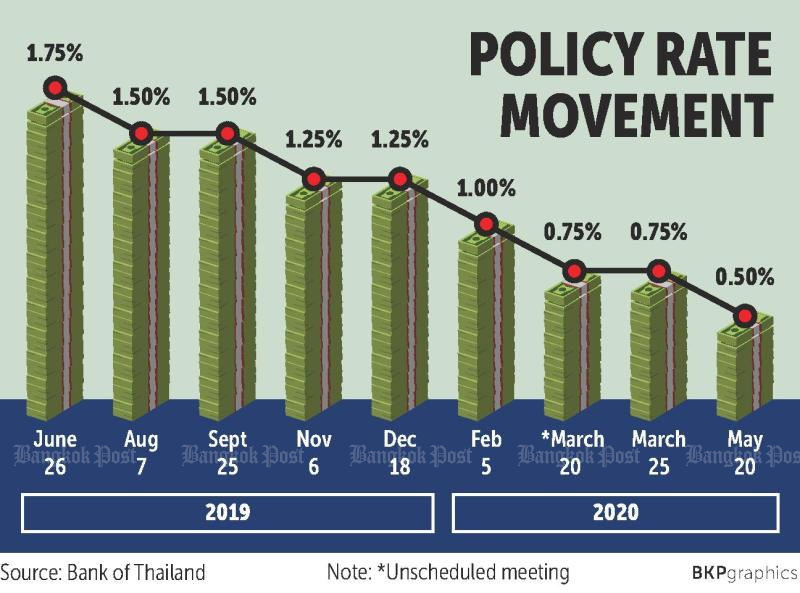 The central bank's Monetary Policy Committee (MPC) voted 4-3 at the meeting to lower the one-day repurchase rate, with the three dissenters preferring no rate changes.

The rate reduction marked the fifth since last August. The MPC kept the rate steady at its previous meeting after a 25-basis-point cut at an emergency meeting on March 20.

The economy is expected to shrink more drastically than earlier projected because of downgrades to tourism and merchandise exports as the global economy remains hamstrung, said MPC secretary Titanun Mallikamas.

Domestic demand, both private consumption and private investment, would contract more than previously assessed due to higher unemployment and containment measures, he said.

The economy is on the path to a recession after shrinking 1.8% year-on-year in the first quarter, the deepest contraction since the flood-hit fourth quarter of 2011.

The central bank earlier downgraded the economic growth outlook for 2020 to a 5.3% contraction from 2.8% growth, largely rattled by the coronavirus spread.

Mr Titanun said financial and fiscal measures would help to partially alleviate the liquidity problems of households and businesses, as well as support the economy's gradual recovery.

"The MPC believes targeted and timely fiscal measures remain vital to supporting employment and small and medium-sized enterprises [SMEs], as well as facilitating the economic recovery and potential growth going forward," he said.

The MPC considered the toll the pandemic has taken on households and SMEs, and their default risks will escalate after the relief measures end, said Mr Titanun.

The committee urged financial institutions to accelerate debt restructuring. It is necessary for the central bank and other related regulatory agencies to prepare measures to cope with increasing risks if the debt servicing capability of borrowers were to deteriorate more than expected, as well as to ensure sufficient liquidity and continuation of functioning and stable financial institution systems.

Regarding exchange rates, the committee expressed concern over the baht strengthening and hurting the economic recovery. Developments in the financial markets and the foreign exchange markets warrant close monitoring.

The financial institution system remains sound, said the MPC. Commercial banks have robust capital funds and loan-loss provision levels. Nevertheless, there remains a need to monitor the risks that may pose vulnerabilities to the stability of the commercial bank system.