HK hotels on their knees as two-thirds of rooms empty

Hong Kong hotels were the biggest losers in Asia's hospitality industry in the first quarter, as travel bans and lockdown orders to contain the global coronavirus pandemic kept business travellers and tourists away, hitting the financial hub particularly hard.

Hong Kong hotel operators, on their knees since anti-government protests last June started to deter visitors, have "experienced a bumpy and challenging period over the last year",  said Rosanna Tang, Colliers' head of research for Hong Kong and Southern China. The average occupancy rate across the region fell to 42.1% in the first quarter, with the average room rate dropping to US$97.90, the report said.

The coronavirus pandemic, which has sickened 1,056 people and claimed four lives in Hong Kong, has added to the business woes of a city that is already in its deepest recession in decades. Thousands of events, shows, exhibitions from the Art Basel contemporary art expo to Standard Chartered's Hong Kong Marathon had been cancelled amid the outbreak, leaving hotel operators to watch in dismay as their rooms sit empty.

The situation is "worse than the Sars (severe acute respiratory syndrome) outbreak in 2003", said Michael Li Hon-shing, executive director of The Federation of Hong Kong Hotel Owners, with 86 members running about 200 hotels and employing some 80,000 workers. "With no tourist arrivals, hotel operators had to undertake a price war to fight for guests, but a lot of rooms are still sitting empty."

As few as 4,100 visitors arrived in Hong Kong in April, compared with 5.57 million in the same month a year earlier, according to data by the Tourism Board. That pushed the average daily income that an available hotel room can contribute in Hong Kong to a 17-year low of HK$290 at the end of April, a 78% plunge from a year earlier.

Still, the steepest plunge in hotel occupancy was seen in South Korea and Vietnam, both seeing declines of 71%, in the first three months of 2020, according to the report. 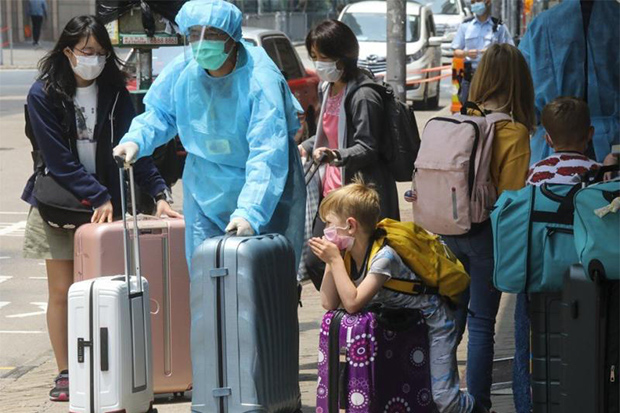 Mainland Chinese tourists and shoppers, the lifeblood of Hong Kong's retail and hospitality industry, dwindled to a mere 539 during the five-day Labour Day holiday in May, as cross-border travel stopped amid 14-day quarantine regulations, according to data from immigration department. A year ago, 840,000 visitors crossed the border to Hong Kong in the first three days of the Labour Day holidays.

Amid the plunge in visitors, Hong Kong's luxury hotel owners have postponed plans to add more than 1,000 new rooms to a "disastrous" market still reeling from an economic slump caused by months of social unrest and the coronavirus outbreak.