A key trade group sees a potentially healthier export picture after shipments rose for a second straight month in April, driven by farm products and gold. 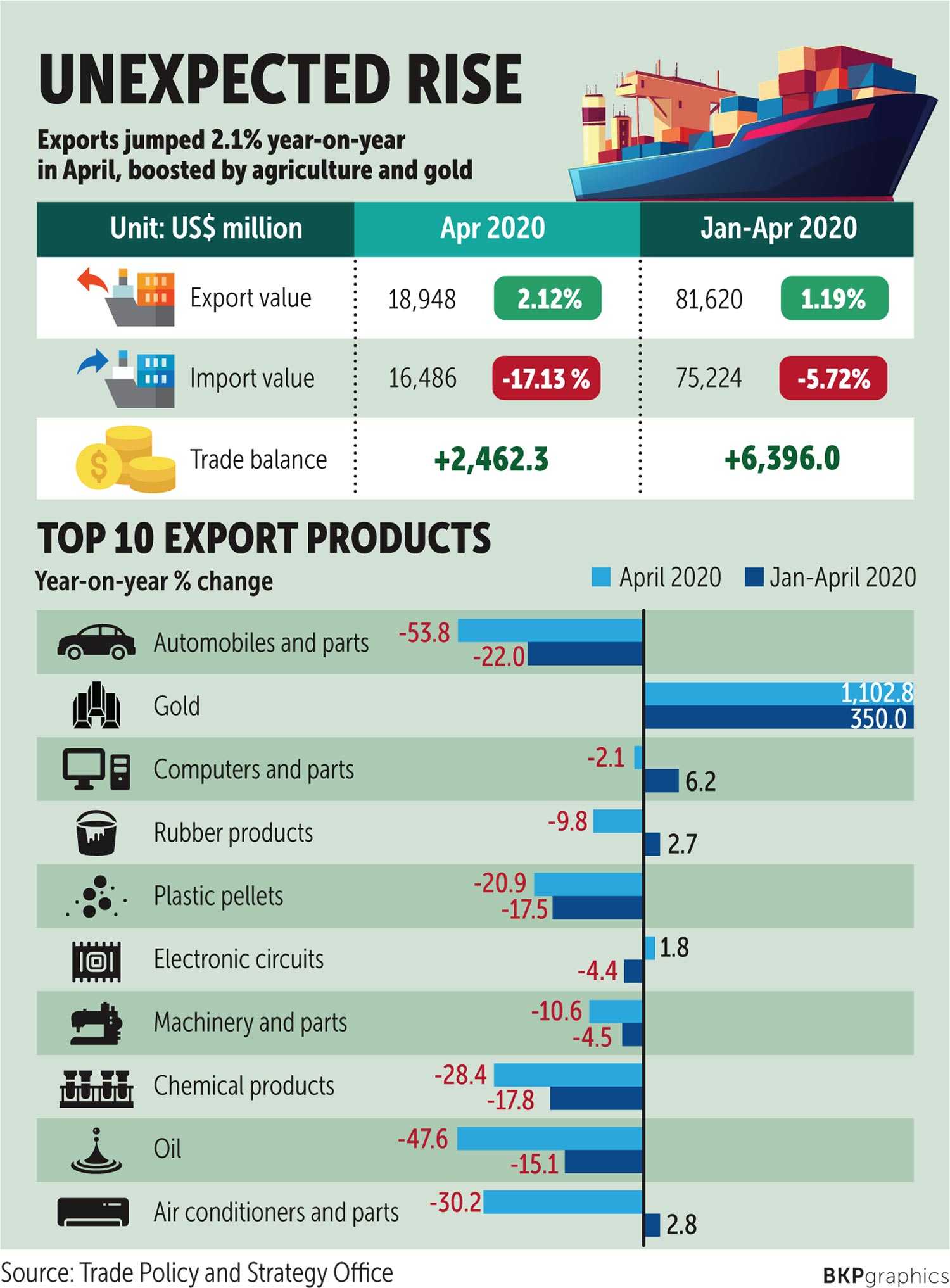 Ghanyapad Tantipipatpong, chairwoman of the Thai National Shippers' Council, said the April surprise signals that full-year exports could shrink by less than the TNSC's current forecast.

She cited Thailand's strength in exporting food, electronics useful for working at home and medical supplies like rubber gloves.

Despite the easing of lockdown measures and higher demand in several export categories, the TNSC on May 5 forecast Thailand's shipments to contract by 8% this year.

The pandemic has ravaged major economies, especially key trading partners like the US, the EU and China, while higher household debt and lower purchasing power worldwide are anticipated.

More importantly, transport remains inconvenient in many areas because of lockdown measures, while the business sector's operating costs keep rising.

The baht has started to appreciate, and global oil prices are volatile because of shrinking demand and the conflict between the US and Iran.

The Commerce Ministry reported yesterday that customs-based exports unexpectedly rose by 2.1% year-on-year to US$18.94 billion in April after a surprise 4.2% increase in March.

"The spike in gold exports highlights the risk aversion effects arising from Covid-19 and the global economic slowdown, resulting in rising gold prices and large exports to Switzerland, Singapore and Hong Kong," said Pimchanok Vonkorpon, director-general of the Trade Policy and Strategy Office under the Commerce Ministry. "In addition, global oil prices have suppressed exports of oil-related products, in particular to Asean and CLMV markets."

Exports to major trading partners stood out in April, especially those to China and Japan, rebounding 9% and 9.8% respectively, while shipments to the US and Asean continued to grow.

Exports to the EU, the Middle East and South Asia fell in April, constrained by the pandemic and lockdown measures.

Ms Pimchanok said the coronavirus crisis has highlighted growing demand for farm products and processed foods and opened a window for Thailand to broaden market share.

"Although existing lockdowns in many countries have caused traffic congestion in ports and disrupted air logistics in general, the outbreak recovery and lifting of lockdowns in some countries, for example China, Germany, Italy and New Zealand, will enable economic activity and facilitate international trade flows gradually," she said.

"This signals positive momentum to Thai exports in the medium term. Thailand's exports are unlikely to contract too much as many agencies forecast. If exports average $20.57 billion per month, exports are estimated to shrink by only 0.5% this year."