Airlines are trying to reassure passengers that masks and filtered cabin air provide reliable protection from infection in flight. (Reuters)

Boeing Co. and Airbus SE are researching the new coronavirus's behavior inside jetliners, part of an industry push to curb risks that have brought air traffic to a near standstill.

Their work will involve academics, engineers and medical experts expected to examine new measures to prevent disease transmission on airplanes, according to the companies and people involved in their discussions.

Boeing said it is developing computer models that simulate the cabin environment and could ultimately inform decisions by airlines, health officials and regulators on how to prevent the virus's spread. "We're taking steps to better understand any potential risks," a spokesman said.

Airbus said the plane maker is exchanging information with universities in the U.S. and other countries. Airbus engineers are also exploring other methods of reducing the spread of the virus including self-cleaning materials, a disinfectant that can last for five days and touchless devices in lavatories, the company said.

The Federal Aviation Administration has been in touch with Boeing, Airbus and experts at the Centers for Disease Control and Prevention to assess coronavirus risks for fliers and how to mitigate them, people familiar with those discussions said. FAA officials have for years sponsored research on how to measure and reduce the introduction of fuel and oil vapors in cabins, but those efforts haven't been formally expanded to better understand how the new coronavirus behaves inside planes, one of these people said.

The CDC said its experts participated in a call with the FAA and Boeing about recommendations concerning Covid-19 and travel.

While much is known about airplane ventilation systems and how some pathogens can spread in flight, researchers said they are still learning how the new coronavirus behaves in various settings.

"There are a lot of unknowns right now," said John Scott Meschke, a microbiologist who teaches at the University of Washington's school of public health and has fielded questions from Boeing related to curbing the virus's spread.

The issue is becoming more pressing as more passengers start to board planes again. Airlines have said bookings are beginning to pick up after weeks of near-zero demand, and they are adding back flights after slashing their schedules by as much as 90%. On the Friday before the Memorial Day holiday weekend in the U.S., the Transportation Security Administration screened nearly 349,000 people--still 88% below year-ago levels but the most since March.

Among the efforts Boeing is weighing are research grants for academics undertaking such work, people familiar with the manufacturer's internal discussions said. Boeing has said it is researching new technologies to enhance safety, including using ultraviolet light as a disinfectant and antimicrobial coatings for frequently touched surfaces. 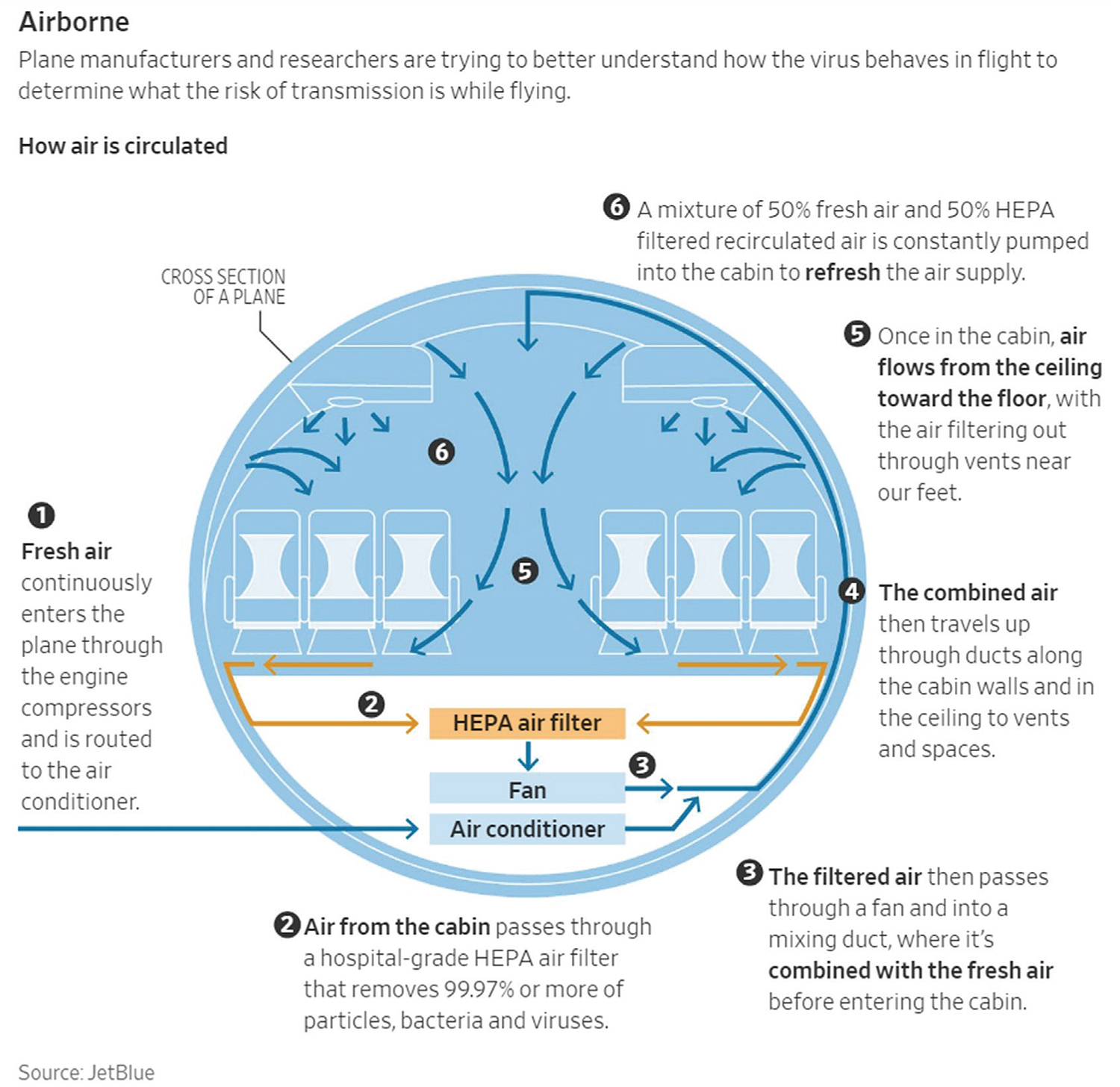 Boeing has expressed interest in a potential project at the University of Colorado, Boulder, that could determine the dosage of ultraviolet light needed to disinfect airplanes between flights, said Karl Linden, an environmental engineering professor at the university. "They want to move really quickly," he said.

Combating the virus in flight is challenging because of commercial air travel's incompatibility with social distancing, some experts said. While researchers broadly agree that airplanes' frequently replaced cabin air and strong filters are effective at removing pathogens, they may not help someone sitting near an infectious passenger who is coughing.

"Social distancing is impossible in an airplane," said Qingyan Chen, a Purdue University engineering professor who recently discussed the topic with Boeing.

Studies of previous epidemics, including SARS and avian flu, suggest that airplane passengers who sit near infectious passengers are at the highest risk. Experts said airlines' requirements that passengers wear masks should significantly reduce the risk they will spread the virus by sneezing, coughing or talking.

U.S. airlines started requiring passengers to wear face coverings during flights and at various other times, such as during check-in, earlier this month. But there is no industrywide rule, and some airlines say they have limited options if passengers refuse to keep masks on.

"If everyone's wearing a mask, then there is very little that is getting out into the air," said Linsey Marr, an engineering professor at Virginia Tech, whom Airbus recently contacted for information on the subject. Longer flights pose greater risk of potential exposure to the virus, especially if passengers remove them during their journey.

The CDC has said the virus appears primarily to spread person to person within about 6 feet through droplets excreted by coughing, sneezing or talking. Charles Haas, a professor of environmental engineering at Drexel University, said more research is needed to know whether airborne particles in aircraft or other indoor spaces could spread the virus beyond such a limited area.

Airlines have ramped up cleaning efforts--disinfecting bathrooms, tray tables and seats between flights. Some are distributing sanitary wipes to passengers. The CDC has said transmission through touching contaminated surfaces is a possible, though not primary, mode of infection.

The International Air Transport Association, a trade group, has collected reports of crew members who have become infected on the job but said that of 18 major carriers it surveyed recently, none reported instances of suspected transmission between passengers. The survey found three episodes of suspected in-flight transmission from passengers to crew members between January and March, and four cases in which pilots might have transmitted the disease to another pilot before, during or between flights.

Separately, Canadian public health officials didn't find evidence of transmission after monitoring the crew and 25 travelers who had sat near an infected passenger on a January flight. Researchers in France suspect one person was infected on a February flight to that country from the Central African Republic. Another recent study tied some cases in China to in-flight transmission.

Airline executives said they are working to reduce the risk of infection in flight. Besides the mask requirements, U.S. carriers have reshuffled boarding and deplaning procedures to minimize contact. Carriers including Southwest Airlines Co. and Delta Air Lines Inc. are leaving seats empty and capping the number of passengers on a flight. Southwest Chief Executive Gary Kelly said air filters and new cleaning measures have made cabins clean and safe.

"It's never going to be perfect no matter what we do," Mr. Kelly said in an interview. "But I think for the circumstances, it's very well done."

Andy Pasztor and Benjamin Katz contributed to this article.