Edge of a dilemma
Business

Edge of a dilemma

To cut or not to cut is the puzzle facing economists and analysts deciphering the Bank of Thailand's interest rate decision-making, with pandemic pressures presenting the possibility of a zero policy interest rate.

The Bank of Thailand cut its policy rate by 25 basis points to a record low of 0.50% on May 20 to help soften the economic impact of the pandemic and social distancing measures.

It was the fifth cut since last August and the third monetary easing this year.

"The Thai economy is likely to contract at a deeper pace than previously predicted and the committee considered that the right relief measures, launched in a timely manner, will help cushion some impacts," said Monetary Policy Committee secretary Titanun Mallikamas.

The economy is heading for recession after shrinking 1.8% year-on-year in the first quarter, the deepest contraction since the flood-hit fourth quarter of 2011.

The economic outlook for the remaining quarters of 2020 is unpromising, as the latest economic figures reported by the central bank indicate contractions in major economic indicators, except for public spending. 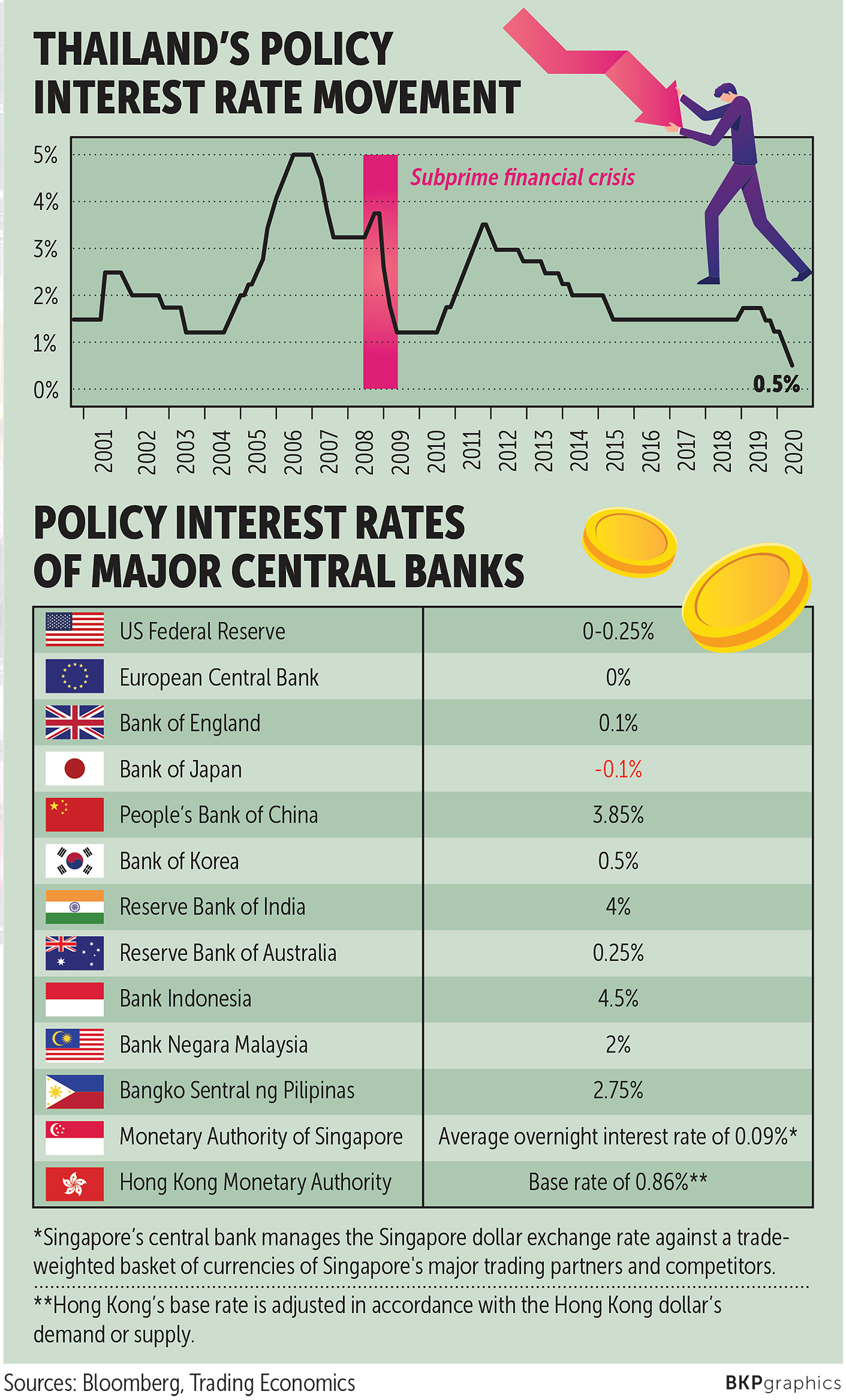 The possibility of Thailand's benchmark interest rate falling down to 0% may be a far-fetched conundrum for some, but such possibility is becoming more plausible with the policy rate now at an all-time low.

Some major central banks have implemented zero rates to mitigate economic conditions battered by the pandemic crisis, such as the European Central Bank (ECB) and the US Federal Reserve.

Some central banks have also been flirting with the idea of implementing a negative policy rate.

Negative interest rates were introduced by the ECB in 2014 and by the Bank of Japan in 2016. Japan's central bank has left its policy interest rate at -0.1% to the present day.

In theory, negative rates, seen as a medium to ward off deflation, would boost the economy by encouraging consumers and banks to take on more risk through borrowing and lending money.

On the other hand, negative interest rates make it less appealing to keep cash in the bank. Instead of earning interest on savings, depositors could be charged a holding fee by the bank.

"[The monetary policy] will only head towards the direction of standing still or going downward, as both the global and Thai economies will plunge deeper this quarter from the imposed lockdown measures," said independent academic Somjai Phagaphasvivat. "It would not be a surprise if the policy interest rate is reduced to 0%, but a negative interest rate is not anticipated."

Negative interest rates would dent banks' profits and financial stability while simultaneously discouraging savings, Mr Somjai said, adding that consumers' money will not be used for spending because their incomes are insufficient.

Tim Leelahaphan, an economist at Standard Chartered Bank Thai, expects the central bank's rate-setting committee to further cut the policy rate by 25 basis points in the third quarter to 0.25% after the rate was trimmed from 0.75% to an all-time low of 0.50% at last week's meeting.

"Amid the monetary policy easing trend, the policy rate is likely to be lowered to zero or even negative depending on economic circumstances and the new central bank governor's direction," Mr Tim said.

The Bank of Thailand is set for a new governor after its incumbent chief Veerathai Santiprabhob decided against seeking a second term. His single term is due to expire at the end of September.

Further monetary policy easing could be on the cards, but targeted policies are preferred to rate reduction as the latter's effectiveness becomes less, said Kobsidthi Silpachai, head of capital markets research at Kasikornbank.

Conventional policy rate cuts are an ineffective tool in shoring up the dismal economy, but pumping money into the economy through targeted policies, such as the establishment of the Corporate Bond Stabilisation Fund (BSF), is more effective, Mr Kobsidthi said.

"Low, zero or even a negative policy rate could be meaningless," he said. "Central banks across the world, including the Bank of Thailand, will continue to inject fresh funds or de facto QE [quantitative easing] to soften economic impacts from the Covid-19 crisis."

With mounting uncertainties, the country's policy rate for this year is unpredictable, he said.

QE is an awkward fit for Thailand, where the country's economy has an imbalance with structural problems along with a significant current account surplus, Mr Kobsidthi said. 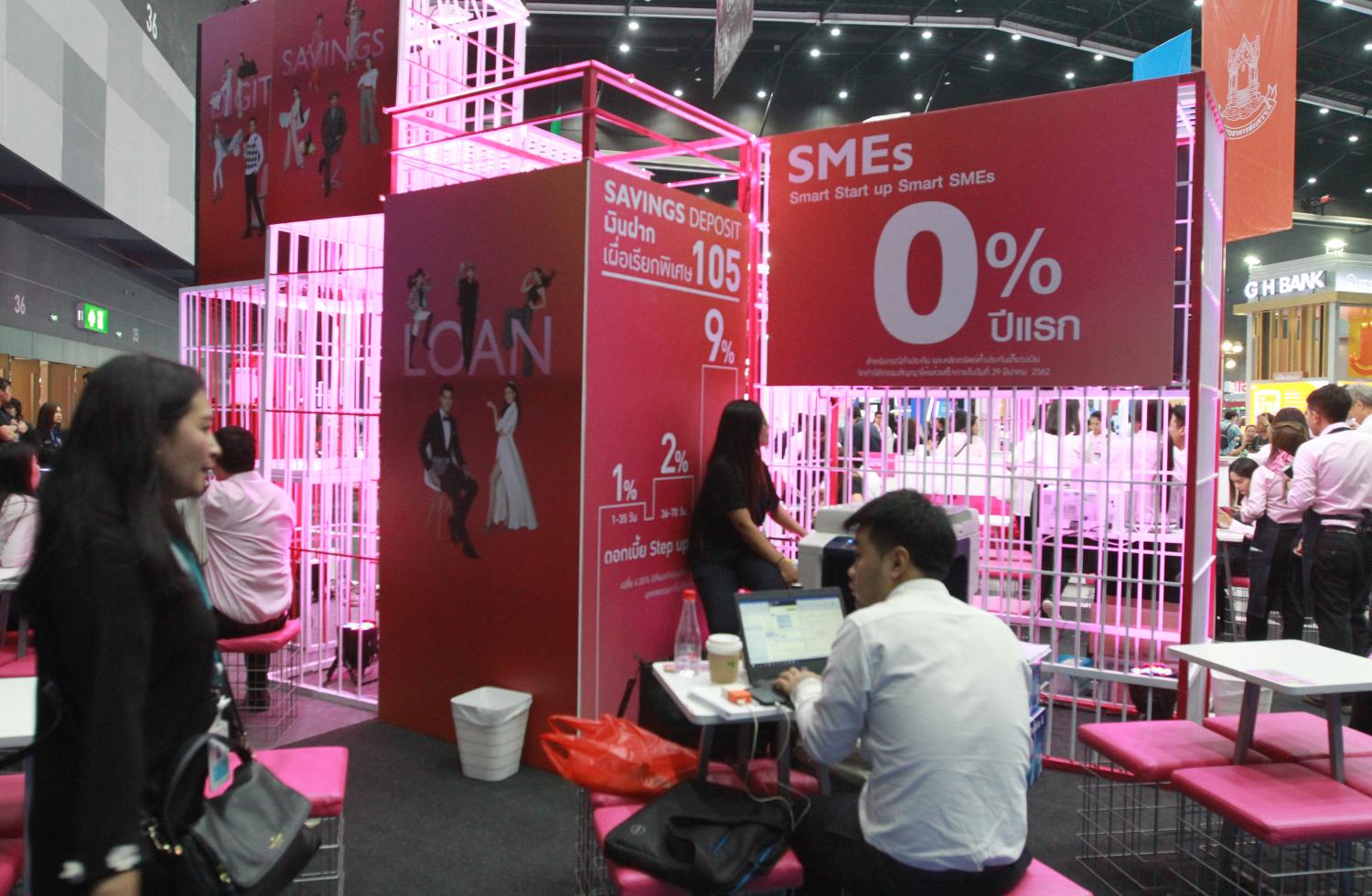 Leaving some monetary ammunition in the barrel for more rainy days may be a preferred option for the rate-setting panel, given that the economic downturn has yet to reach its trough.

Lavaron Sangsnit, director-general of the Finance Ministry's Fiscal Policy Office, doesn't expect the country's policy rate to move towards zero. He reiterated that both fiscal and monetary authorities have made every effort to harmonise their policies to pull the economy out of the woods.

The central bank's rate-setting panel is seen to stand pat on the current benchmark rate at 0.50% for the remaining period of this year after this year's third rate cut at a meeting on May 20, Mr Lavaron said.

Keeping the policy rate at the rock-bottom level for an extended period does not bode well for the economy, as it indicates how the economy remains in the doldrums and this always triggers funds to flow out of the financial market into the capital market, he said.

It's highly possible for inflation to fall below zero this year, and the prolonged negative inflation could cause deflation, which is worrisome, Mr Lavaron said, adding that economic growth with mild inflation is the preferred environment.

Against the backdrop of extremely low price pressure, some central banks have shied away from using inflation targeting and adopted exchange rates as an anchor of monetary policy, but the Bank of Thailand is studying in-depth what is the appropriate method for Thailand, he said.

Since 2000, the Bank of Thailand has operated a monetary policy under the flexible inflation targeting framework, a popular regime adopted by various central banks all over the world.

Even though the gap between deposit and lending rates remains wide after banks have passed on the central bank's rate cuts, banks' explanation is that the large gap is still essential and justified because they are liable to pay interest to all depositors, but there is no guarantee that all borrowers will pay out interest and principal to lenders.

But liquidity, which is awash in the global financial market compared with flagging economic growth dampened by the coronavirus crisis, is pressuring the central bank to ease monetary policy further, said a Finance Ministry source.

Amid the spluttering economy, a low interest rate does not ramp up investment, but it does help cut costs for business operators to enable them to have higher liquidity.

But the low-rate environment does not lend support to mitigate the baht's strength, as the country's large current account surplus is a major contributor to the strong local currency, the source said.

Bloomberg reported on May 20 that the baht rallied almost 1.5% in May after dropping more than 7% in the first four months of 2020, as traders were betting that Thailand's tourism-dependent economy would recover swiftly from the virus-induced slump as economies begin to reopen.

But such assumptions may no longer materialise after Thailand recorded zero foreign tourists in April following measures to close borders and ban international passenger flights, which has been extended to June 30 for the latter, to curb the spread of the coronavirus.

Tak Bunnag, head of the global markets group at Bank of Ayudhya (BAY), said the central bank is expected to keep the policy rate at 0.50% until year-end 2020, with fiscal policy playing a greater role in turning around the country's economy.

An appreciating trend against the dollar is expected for Asian currencies because these nations' economies are expected to turn a corner at a faster pace than the US and Europe after they have managed to tame the outbreak, Mr Tak said.

The upcoming US presidential election is a factor to be watched because it could prompt a wild swing in the money and capital markets, he said.

BAY forecasts the baht to move in a tight range of 31.50-32.50 baht against the dollar at the end of this year.

Despite a further drop in interest rates, homebuyers' confidence will largely depend on the economy, which has been crippled by the lockdown.

"The market should track the consequence of economic activities being halted by the lockdown in the second quarter and reopening in June, the employment rate and GDP growth," said Vichai Viratkapan, acting director-general of the Real Estate Information Center (REIC).

Mr Vichai said the impact from the virus crisis is large. The REIC forecasts a drop of 15% in the residential market this year, up from a decline of 5% predicted in January 2020.

"Though people want to buy a house, many are not confident in their income," he said. "It also depends on financial institutions to give them mortgage loans, but many banks are cautious of possible non-performing loans."

Mortgage loans expanded by 3.4% in the first quarter, down from 5.4% in last year's corresponding period, due to lower house sales, according to Bank of Thailand data. Housing non-performing loans rose to 4% from 3.7% in the first three months.

Consumer loan demand is expected to significantly decline from this quarter on account of the outbreak and public health measures, with some earners experiencing lower incomes and therefore postponing loan applications to preserve liquidity for necessities, according to the central bank's senior loan officer survey.

Kessara Thanyalakpark, deputy chief executive of SET-listed Sena Development Plc, said a decrease in interest rates will benefit the financial costs of developers that need to maintain liquidity amid the virus crisis.

"When the economy is poor, monetary policy will turn to the lowest interest rate as possible to stimulate the economy," she said. "It can compel home purchases, but the problem is homebuyers' affordability."

Thongchai Busarapan, co-CEO of SET-listed Noble Development Plc, said the company will lean on undrawn facilities to balance the cost of funds that mainly come from bonds after interest rates were slashed.

"In the past, financial costs from bonds were lower than those from project financing," he said. "The company, therefore, issued bonds to get competitive financial cost. Today, the Covid-19 outbreak largely disrupts the financial market. Many central banks have reduced their policy interest rates."

As a result, financial costs from project loans began declining, while those from bonds have become a bit higher because it's more difficult to sell bonds amid low confidence, Mr Thongchai said.

Noble has undrawn facilities of 6.63 billion baht remaining from a total of 11.2 billion baht. It expects financial costs this year to decline to 4% from 4.5% as the costs of project loans fall to 3%.