The Thai economy is likely set for a U-shaped recovery and a return to pre-pandemic growth levels in two years, according to the Siam Commercial Bank's Economic Intelligence Center (EIC). 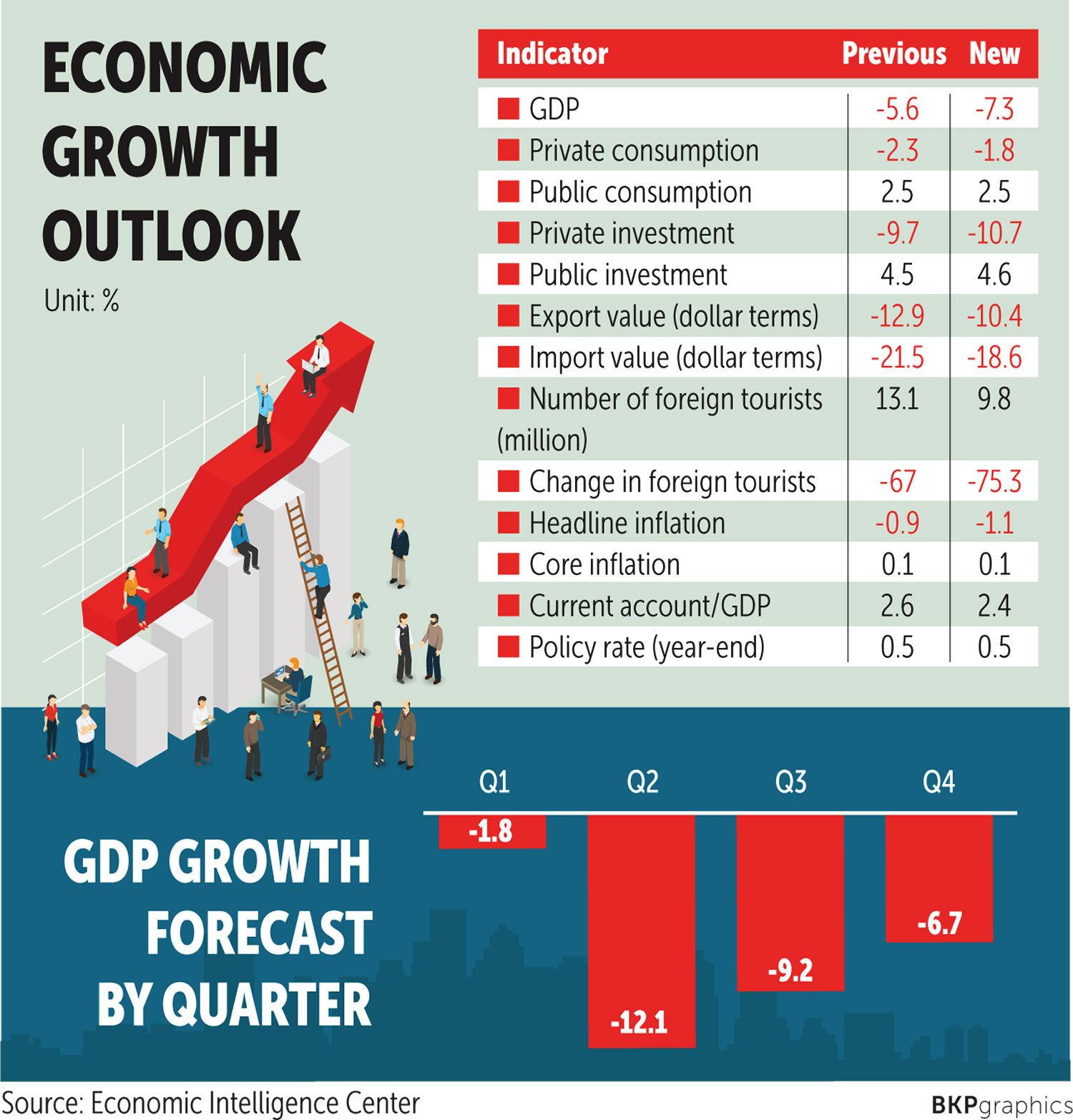 The worst contraction is expected to be seen this quarter at 12.1%, before narrowing to 9.2% in the third quarter and 6.7% in the fourth, he said.

The EIC lowered its economic growth forecast for 2020 to a 7.3% contraction from a 5.6% fall predicted earlier, assuming that the number of foreign tourist arrivals will plunge 75.3% from last year to 9.8 million.

Mr Yunyong said the number of foreign travellers would decline by 72.3% to 11 million in the better-case scenario that the "travel bubble" -- bilateral travel with low-risk countries -- worked well. But the number would fall 81.5% to 7.4 million in the event that a second wave of the pandemic cropped up.

Titanun Mallikamas, secretary of the central bank's Monetary Policy Committee (MPC), said recently that the panel would release its new forecasts on economic growth, inflation and the current account balance at its meeting on June 24.

Economic growth shrank 1.8% year-on-year in the first quarter, the deepest contraction since the flood-hit fourth quarter of 2011.

The MPC's minutes from a meeting on May 20, when it cut the policy rate to a record low of 0.50%, stated that the country's economy would contract by more than expected this year.

Budget hotels are expected to benefit from the domestic tourism recovery as people remain cautious about spending amid future uncertainties, he said.

Tourism and related businesses, property development and automotive industries have borne the brunt of the outbreak and are expected to take longer to recover than others, while telecommunications is the least affected.

The number of workers covered by the Social Security Fund's Section 33 who claimed unemployment benefits surged to a record high of 220,000 in April. There were 11.5 million employees under Section 33.

Thai households are seen as financially vulnerable, with 59.8% of 21.8 million families holding financial assets that can cover spending for less than three months, Mr Yunyong said, adding that 5.8 million households earn income strictly from employment and their income is less than 30,000 baht a month.

With the spike in unemployment, retail loan quality erodes and adds risk to the country's recovery and financial stability in the period ahead, Mr Yunyong said.

The EIC predicts that the central bank's rate-setters will stand pat on the rate for the rest of the year. But the MPC could either cut the rate further or use other instruments such as increasing government bond purchases, expanding asset-buying scope or relaxing soft loan criteria if further steps are needed.

Deflation risk in Thailand is escalating and the country could enter deflation if the economy remains stagnant next year.

May's headline inflation, the lowest reading in nearly 11 years, sparked concerns about deflation, but the central bank has insisted that the news doesn't mean Thailand has already entered deflation.

Meanwhile, Finance Minister Uttama Savanayana said the economy still faces challenges as it largely relies on the global economy, which is exposed to pandemic risks.

No one knows how long the outbreak will last, Mr Uttama said.

Deputy Prime Minister Somkid Jatusripitak will chair a meeting on Monday to follow up progress of the relief measures and assess the economic situation, he said.

Representatives from the Bank of Thailand, the Economic and Social Development Council, the Stock Exchange of Thailand and the Securities and Exchange Commission will take part in the meeting.

The Finance Ministry is contemplating whether additional measures are needed, Mr Uttama said, adding that he remains satisfied with the existing measures to alleviate impacts from the outbreak.

He did not comment on the shake-up in the Palang Pracharath Party, of which he is the leader.