'Travel bubbles' could be key to opening up the country again

Only a small number of visitors are seen at the Grand Palace on Saturday as the tourist attraction reopens after being shut for about two months due to the Covid-19 pandemic. (Photo by Wichan Charoenkiatpakul)

Thailand has now recorded no local transmission of Covid-19 for 19 consecutive days with all of the recently recorded infections being found in Thais repatriated from abroad.

However, although the curfew has been lifted and most domestic businesses will be allowed to resume operations, inbound travel remains banned.

Ways in which the country can safely allow the return of tourists are currently being floated, chief among them the idea of "travel bubbles" which would involve reciprocal travel arrangements with other countries that have shown they can effectively contain the coronavirus.

Income from tourism is now wholly restricted to domestic travel and many hotels are reluctant to reopen even after the lockdown has been lifted with foreign arrivals likely to be limited for some time to come.

Since the inbound travel ban began in April, Thailand has faced the unprecedented experience of having no international tourists for the first time in its history.

In fact, international tourists to Thailand have been scarce since the end of January when China, one of the biggest sources of arrivals, started to impose outbound restrictions on its citizen to curb the spread of the virus. 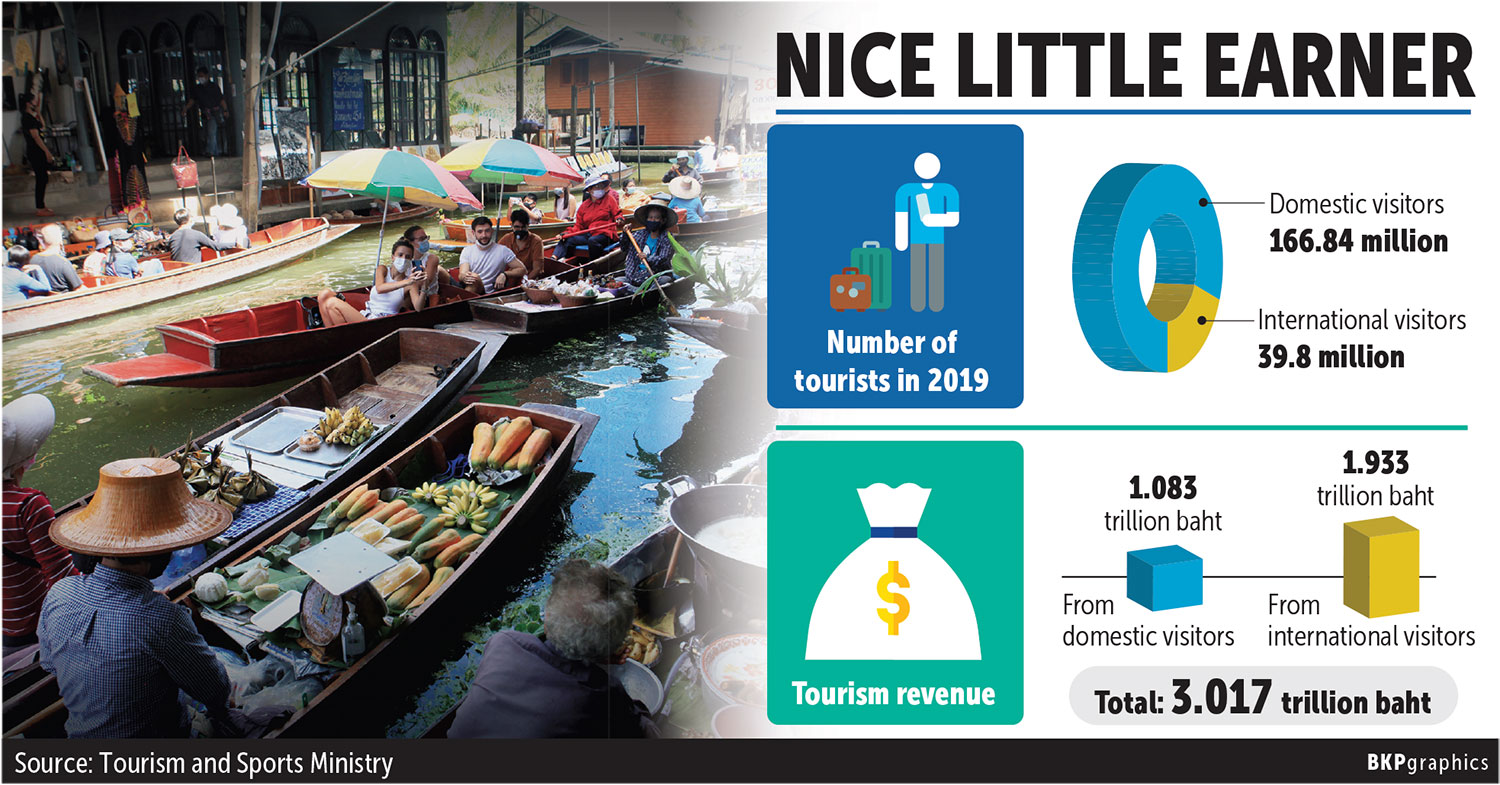 Damrong Ong-art, president of the Chiang Mai tourism operators association and owner of the Thai Jungles Zipline, said less than 50% of association members will be able to survive the crunch.

Companies which rely on overseas tourists from the US, Europe and China have suspended their business during the Covid-19 crisis which has forced borders to close. Some have attempted to focus on domestic tourism instead but the struggling economy has meant that local purchasing power has weakened substantially, said Mr Damrong.

To him, the situation remains volatile. Mr Damrong said that although the government, private sector and the public have worked together to limit virus transmission, Chinese visitor numbers are not expected to bounce back soon as China is also facing economic constraints in the aftermath of Covid-19.

"Don't expect everything will turn right around in two or three months. The pandemic will have a lasting effect of up to two years," Mr Damrong warned.

FEAR OF A SECOND WAVE

A recent survey by the Department of Disease Control (DDC) found 51% of respondents supported the ban on inbound travel remaining in place until October.

The DDC, in cooperation with other agencies including the World Health Organization Southeast Asia, conducted 12 rounds of surveys plus interviews with public health volunteers from April to June 4 with over 200,000 respondents in total. The latest round was conducted from May 29-June 4.

La-Iad Bungsrithong, president of the Thai Hotels Association's northern chapter, said if opening the border is likely to risk a second wave of infections, the country should keep the doors closed throughout the third quarter.

The decision to reopen the country with specific nations on a government-to-government basis has to be made carefully, she said.

DDC deputy director-general Tanarak Plipat said the government is discussing the possibility of allowing foreigners who do business in the country back in first.

"This is a very low-risk approach because they are going to stay in Thailand for quite a long time, so they can still follow the same rules of coming in and undergoing quarantine for 14 days … When the time is right, I believe we will start with that first before we open up for all tourists," he said.

Chairat Trirattanajarasporn, president of the Tourism Council of Thailand, said the country must strike bilateral agreements to allow quarantine-free travel between nations.

Phumkit Raktae-ngam, president of tourism business association of Phuket, said most hotels have not reopened despite the lockdown easing. "They will only return to business when they feel up to it," he said.

Sarayut Mallum, president of the Phuket tourism industry council, said he believed most hotels in Phuket will prefer to delay opening their doors to customers because there are not enough tourists to sustain their occupancy and generate profits.

He said that a full reopening is likely at the onset of the next high tourism season in October. 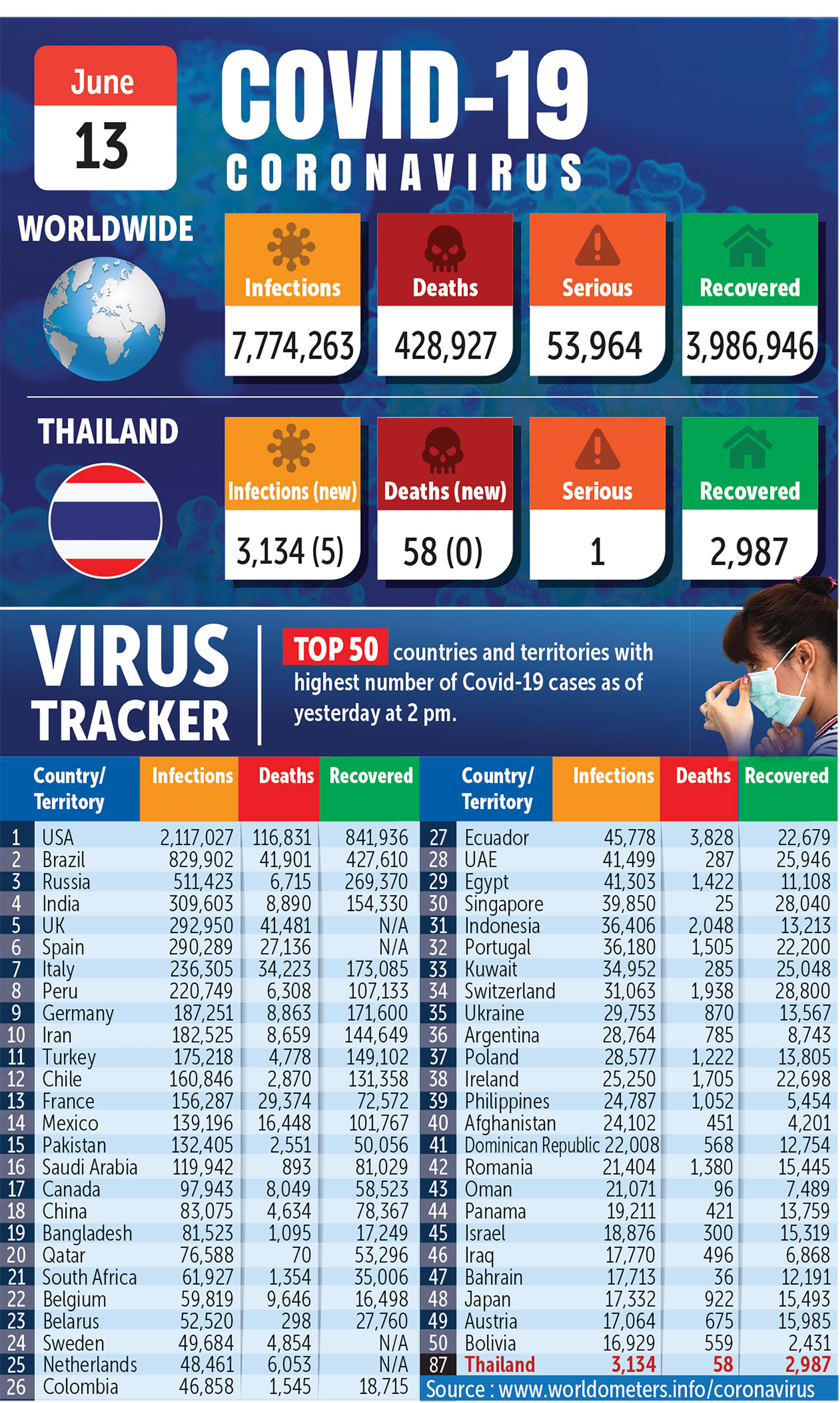 Ms La-Iad, who is also general manager at Rati Lanna Riverside Spa Resort Chiang Mai, said tourism-related agencies have to help promote operators get certified with the Safety and Health Administration standard and encourage tourists to use services from standardised hotels during the early stages of reopening the country.

Hotel operators are already providing screening processes and other hygiene procedures to help ensure the safety of guests during their stays as well as protect the welfare of employees.

She said while the hospitality industry must wait longer for foreign tourists to come back, they hope that domestic consumption can help to make up for some of the lost revenue, particularly state agencies which have a budget to hold meetings and seminars across Thailand.

"Under the current circumstances, the private sector will focus on cost reduction strategies as local tourists have less purchasing power," she said. "Government expenditure will be the major source of revenue we can rely on."

The model involves testing incoming travellers to the kingdom and requiring them to use an app that tracks their location so if they contract Covid-19 infection tracing can be more easily carried out by authorities.

Mr Phumkit said travel bubbles should also be implemented between Phuket and cities in countries where the Covid-19 outbreak has been brought under control, such as Ho Chi Minh City in Vietnam and Chengdu in China.

However, updated tracking platforms should be a prerequisite, he insisted.

This type of measure can restore the confidence of tourists during the early stage of reopening countries, he said.

Mr Raj suggested that the government could also implement tourism zoning for foreign tourists to limit their travels inside the country. The screening process should start from the origin to destination.

Tracking applications and special units to act if infections are found will be crucial, he said.

He stressed the decision to reopen the country has to be made as soon as possible before the economic fallout can cause deeper wounds.

"Every airline is more than ready to take off whenever the sky is reopened for international flights," he said.

Thanusak Puengdet, chairman of the Phuket chamber of commerce, said tourism pumps around 400 billion baht a year into the local economy. The Covid-19 pandemic is expected to drive that number down by at least 60% this year.

"In the broad picture, Phuket has moved to the recovery phase. Banks and financial institutions can support them during this difficult time," he said.

Tourism and Sports Minister Phiphat Ratchakitprakarn said on Friday the ministry has prepared three stimulus packages valued at 20 billion baht to kick start the tourism sector from next month until October.

They include state offers of travel subsidies worth 3,000 baht per person to eligible people and 40% discounts on domestic air travel booked with low-cost airlines.

The government is ready to repatriate film director Ramai "Danny" Moriphan, who was kidnapped in Myanmar over his alleged links to a drug trafficking syndicate

Rise in number of Thais seeking work in Korea