The influx of international travellers, continuing unabated for almost a decade, created euphoric sentiment for Thailand's tourism industry. But with more foreign guests arriving, there was a growing gap between international and domestic revenue.

That gap widened in recent years when the contribution from the domestic market lagged behind its foreign counterpart.

2014 was the first year that the Tourism Authority of Thailand (TAT) noticed the heavy dependence on the international market, especially the waves of tourists from China, India and Russia, which have dominated the tourism market for many years.

The emergence of the Asean Economic Community also accelerated the pace of the international tourist market, causing the TAT to cast a wary eye on the unbalanced revenue.

The TAT introduced a new marketing strategy aimed at balancing the income of international and domestic in the long run, realising that getting domestic contributions on a par with foreign tourist growth would take time.

But the coronavirus pandemic is likely to blunt the TAT's long-term goal for at least three months, April to June, during which time Thailand will receive zero international guests because of restrictions on inbound flights.

The government has set a challenging target to support 100 million domestic trips, while the international arrivals goal has been reduced to 14-16 million from 39.8 million welcomed last year.

An even more difficult task is to meet the total revenue level of 1.23 trillion baht Thailand previously earned, as it took in just 520 billion baht in tourism receipts during the first five months this year, and the fear of further outbreaks still haunts tourism demand. 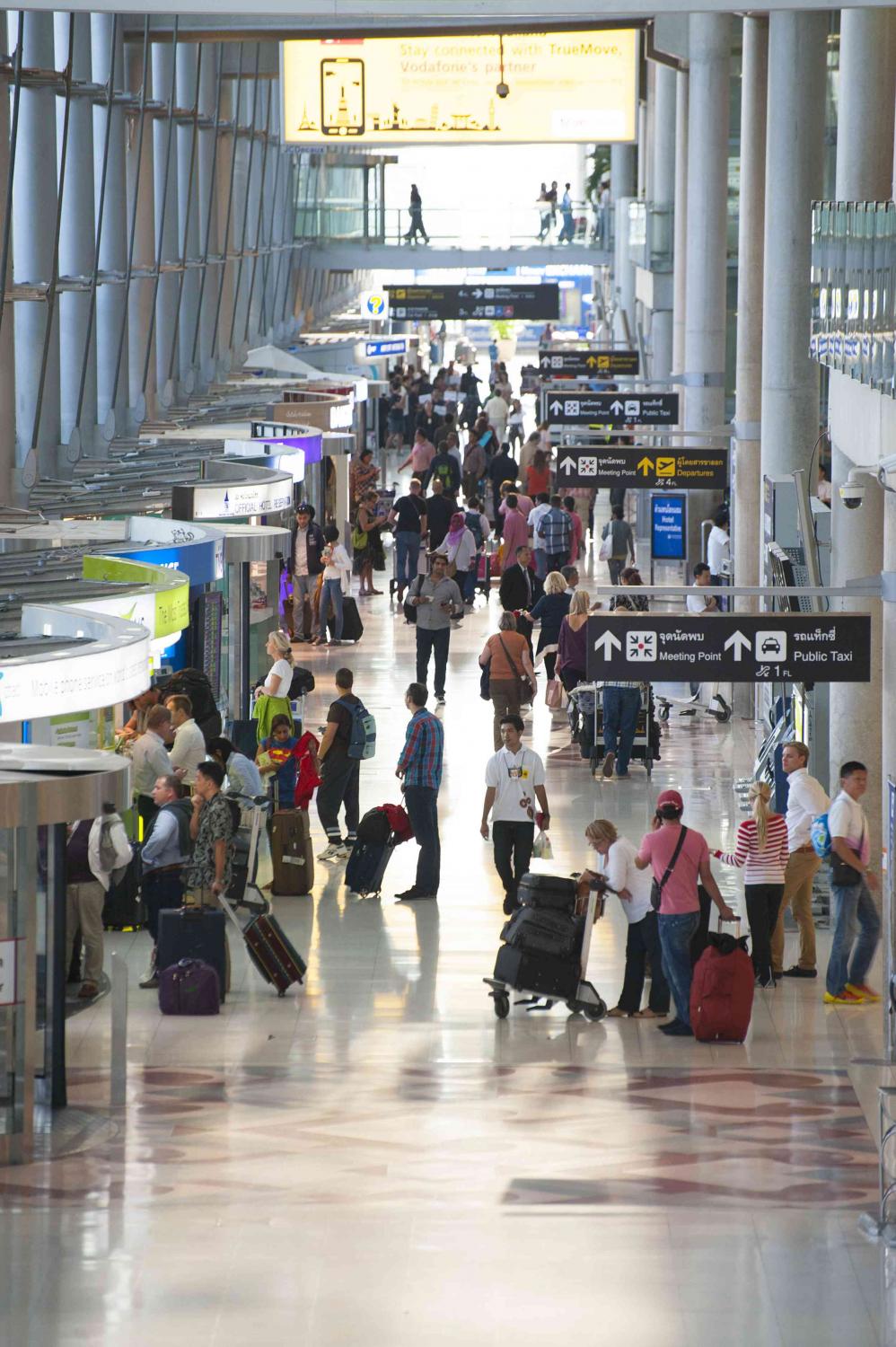 Redirecting Thais from their overseas travel plans to domestic trips could help local operators hang on.

The Finance Ministry is contemplating measures to boost the domestic tourism market in light of inbound flight restrictions.

Eligible recipients of domestic tourism stimulus measures will be entitled to a 3,000-baht cash handout that will automatically be deducted from their bills when they spend nights or pay for food or services at participating hotels, restaurants and related tourism operators, says an informed source at the Finance Ministry.

The scheme will require only hotels, restaurants and tourism-related operators to sign up with the designated state agency, while service users are automatically eligible without any registration requirements, the source said.

To be eligible for the 3,000-baht subsidy, recipients must spend at participating hotels, restaurants and tourism-related operators outside their home provinces.

Apart from this, the ministry is studying a cashback scheme for money spent that exceeds what the government provides to encourage more tourism spending.

Hotel operators cannot run their business by solely relying on the domestic market, as the ratio of local and international guests varies widely across hotels, said Supawan Tanomkieatipume, president of the Thai Hotels Association.

While some properties have a healthy portion of local guests, the vast majority still have to depend on foreigners.

Ms Supawan said the scenario has left the government with a most challenging mission.

If the country can successfully stimulate the tourism sector's 20% contribution to the country's GDP, the economy stands a chance to recover sooner.

To achieve the goal, the most important thing is to introduce effective stimulus plans. Although certain schemes will not be successful, at the very least the attempts can be used to put together better formulas in the future.

As the local market can only be a scaffold in rebuilding the sector, Ms Supawan said it's crucial to gradually ease entry restrictions for foreign visitors to help revive the overall industry in the long run.

She agreed that "travel bubbles" or bilateral agreements between potential countries without back-to-back 14-day quarantines are the best option for Thailand to steadily secure the foreign market during this tough time.

Hotel operators are more than pleased to welcome upcoming guests, as safety and hygiene standards have been tightened to reduce the risk of a second wave of infections.

Chamnan Srisawat, president of the Thai Federation of Provincial Tourist Associations, said flaws in stimulus measures from the government have become apparent in the past month and could lead to failure in healing the badly bruised industry.

"To strengthen local demand effectively, the government should involve tourism operators in discussions before coming up with a stimulus idea to clearly understand the need of operators and help fix the real problem," he said.

If the 3,000-baht cash handout for 4 million Thais does not come with reasonable conditions, the scheme will benefit only big hotel operators -- not the vast majority of operators that are small and medium-sized enterprises.

Mr Chamnan said tourism demand can be stimulated directly by using low-cost airlines and tour buses, along with travel agents who can provide locals with tour packages and ensure that tourism activities are followed through.

He said the government can help subsidise cash payments to tourism operators. Special prices for tourism packages should be offered for the purpose of visiting both major and second-tier provinces. 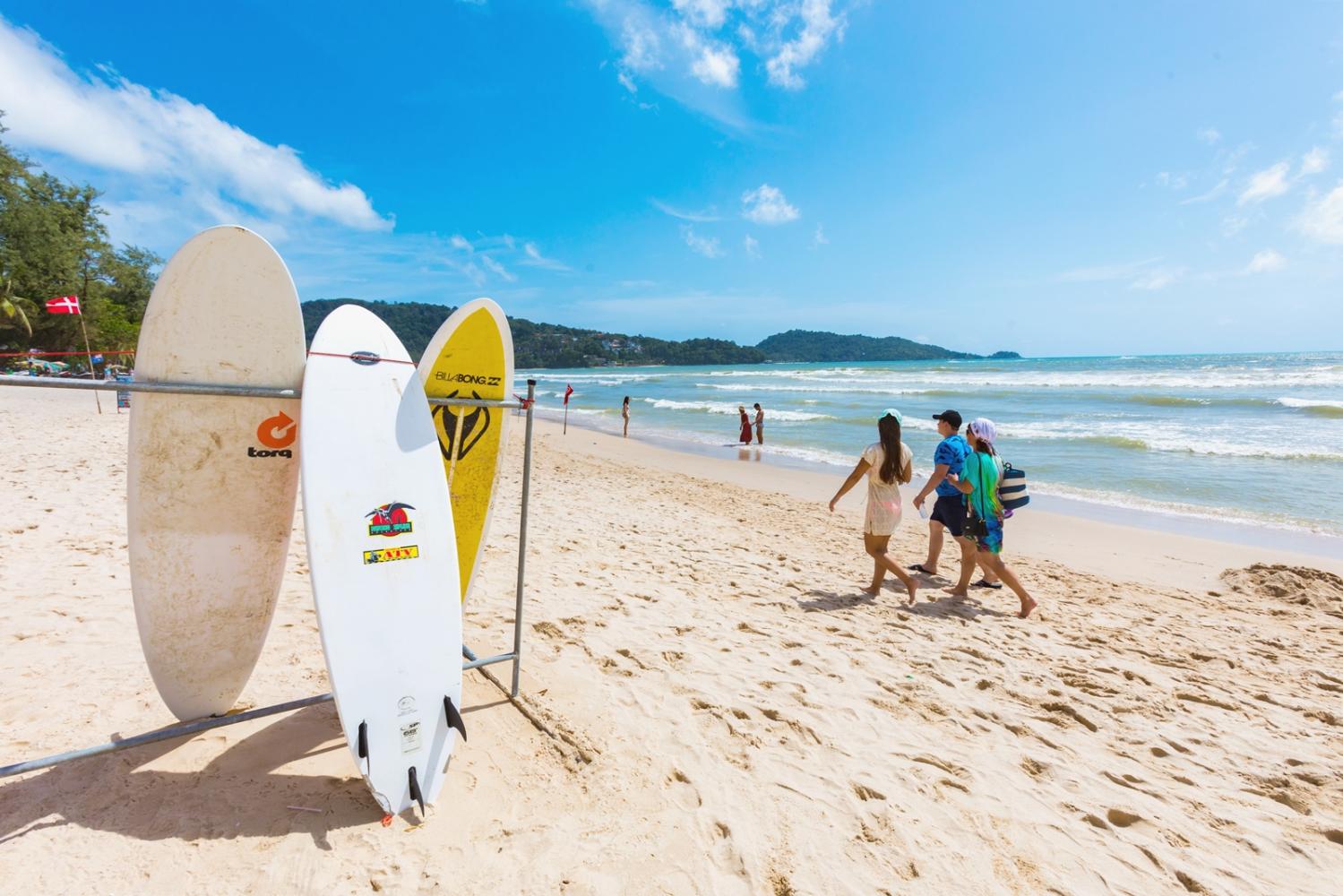 Patong beach in Phuket. Airlines are counting on a domestic travel boost.

The boon of Thailand's tourism industry in recent years is attributed to the tailwind that carried the aviation business along rapidly. Without this support, all carriers are struggling to stay aloft.

Thai Lion Air (TLA), an affiliated low-cost carrier of Lion Group based in Indonesia, was among the fastest-growing airlines despite being a new player. Before the pandemic, TLA's contribution from domestic routes was about 50% of revenue.

Nuntaporn Komonsittivate, head of commercial operations at TLA, said bringing back all the lost revenue will be hard, even though the airline is planning to restart all its domestic routes this month, as flights will be less frequent.

"Amid the pandemic, local demand is unpredictable because the advanced booking window has been shortened," she said. "In the fourth quarter, we have bookings for only 5% of seats, as people will just purchase air tickets 1-2 weeks before their flights."

Raj Tanta-Nanta, deputy chief executive of Nok Air, said it might be difficult to revive Thai tourism without foreign tourists after the outbreak.

Among the 165 million passengers at airports in Thailand, 85 million are Thais and the remaining 80 million are international tourists.

Although the headcount of the segments are almost equal, the latter group comes with higher spending per trip, starting at 30,000 baht compared with 6,000-8,000 baht from local travellers.

Mr Raj said that while the government plans to introduce tourism stimulus packages that focus on hotels, domestic demand will not be enough to take up the hotel room supply in the country.

He believes that restoring tourists' confidence is the key to tourism recovery. A clear and easy-to-understand process from the government will help boost confidence to travel, particularly at airports, in order to avoid confusion and frustration from travellers.

Mr Raj said time-consuming and complicated screening processes at the airport should not be a pet peeve that prevents Thais from travelling, as this will destroy the sentiment that is seeing a return.

The tourism sector is the government's priority. It contributes 18% of the country's GDP, of which 12% or 2 trillion baht comes from foreign tourist arrivals and the remaining 6% or 1 trillion baht is from local tourists.

A Finance Ministry source said the domestic tourism stimulus package will be able to lure Thais planning to travel overseas to shift to local tourist destinations as many countries continue to impose entry bans.

To achieve the National Economic and Social Development Council's economic growth forecast of a contraction of 5-6% this year, 12.7 million foreign tourists are needed.

An additional 6 million foreign tourists are required in the second half, as 6.7 million visited Thailand in the first two months, the source said. 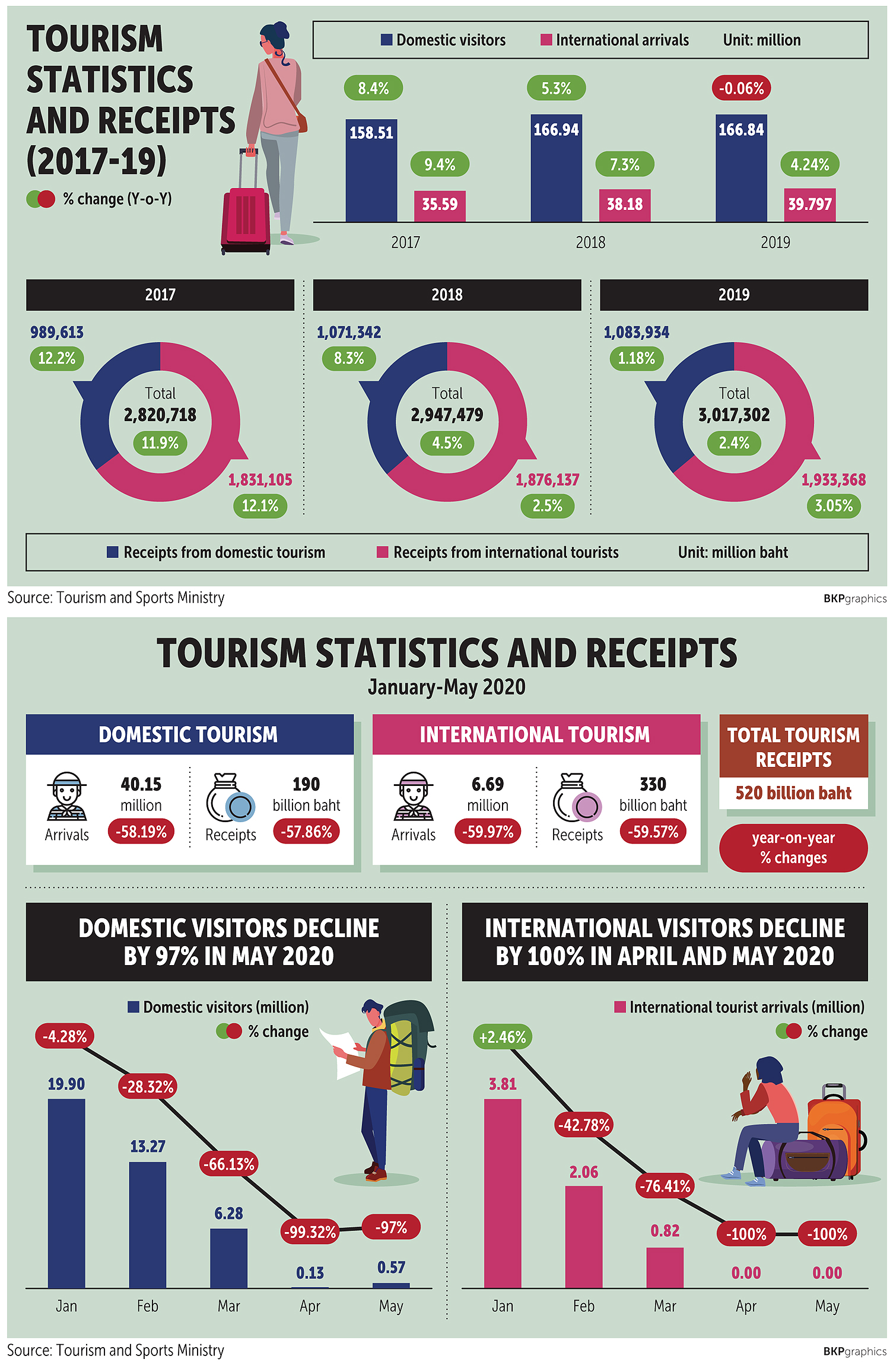