The Tourism Council of Thailand (TCT) is crying foul over the 22.4-billion-baht tourism stimulus package, saying it will mostly benefit big hotel operators and leave behind the small and medium-sized businesses that account for 75% of the sector.

The cabinet on Tuesday approved a domestic tourism package to boost the hospitality sector, including a subsidy for 5 million nights of hotel stays at 40% of room rates, with the discount limited to 3,000 baht per night for up to five nights.

"Although the stimulus package will create tremendous economic impact, in reality the money may circulate only among four- and five-star hotels if the government requires hotels to show a hotel licence before joining the programme," said TCT president Chairat Trirattanajarasporn.

He said it could be a lost opportunity for fragile local businesses already suffering insufficient cash flow, particularly small-town accommodations that lack a hotel licence.

Under normal circumstances, giving priority to legal hotels is important for the government to create fair competition, Mr Chairat said. But as the viral outbreak equally hit all players in the hospitality sector, the aid measure should not be tailored to certain groups of beneficiaries, he said.

"When the Tourism Authority of Thailand (TAT) is working on the details of this project, it should assure that the benefits will disperse to a wider area and create a flow of tourists to many destinations, not only the major tourism areas," Mr Chairat said. 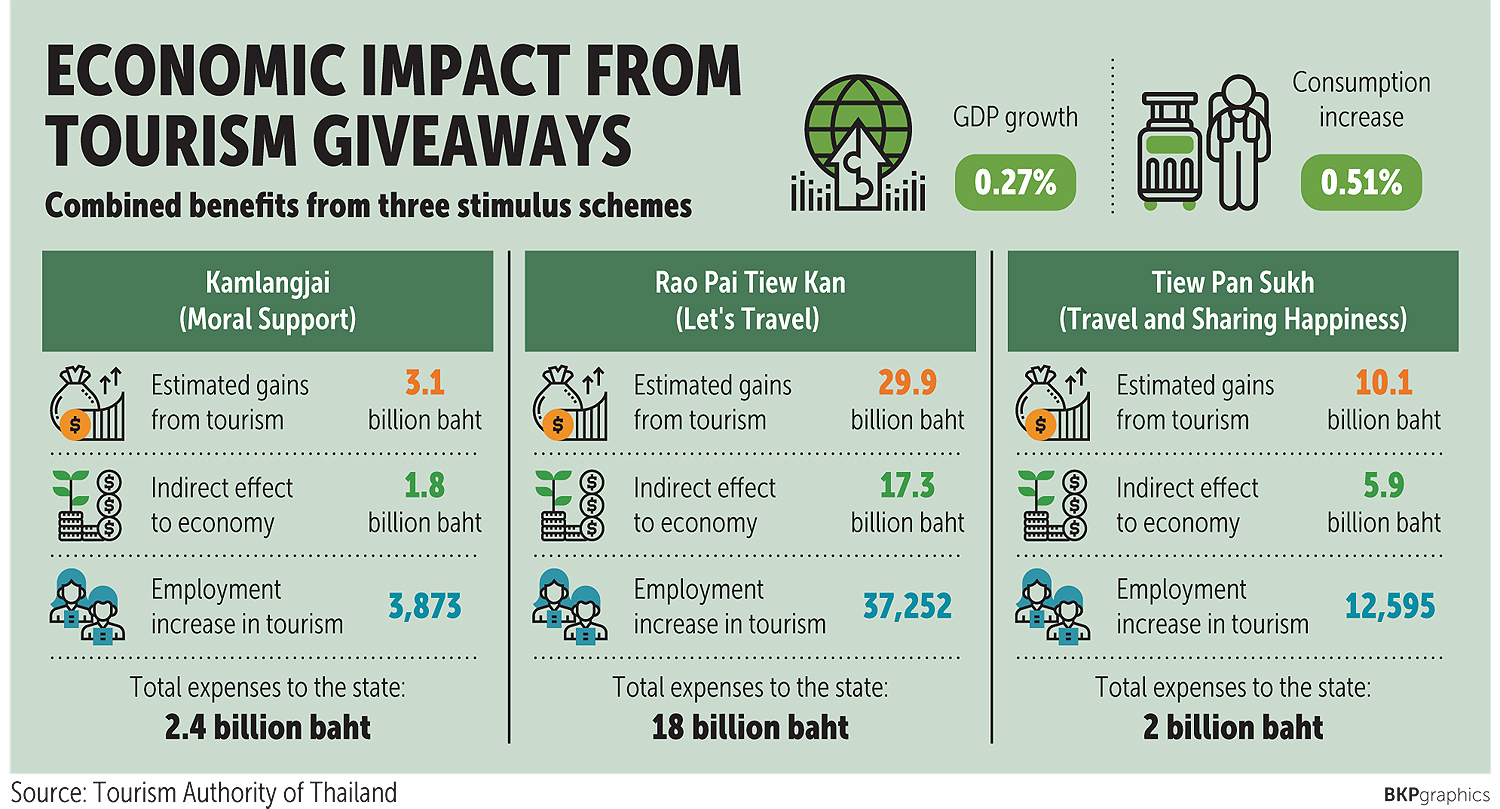 Regarding the 2,000-baht travel budget per person for 1.2 million medical personnel such as village health volunteers and subdistrict health-promotion hospital workers, the TCT president said the amount is insufficient compared with tour package prices in the market.

Meanwhile, the Thai Hotels Association (THA) disagreed with the TCT, saying eligible hotels for the scheme should be licensed only.

THA president Supawan Tanomkieatipume said priority should be given to players who respected the rules from the beginning, or else it would encourage operators to continue wrongdoing in the future.

Ms Supawan said that after the cabinet approval the TAT should ask operators seeking to participate in the programme to register in the system first in order to gauge the readiness of supply.

She said 5 million nights of hotel accommodation is already a suitable portion to stimulate domestic tourism activity, but it could increase to 20% of the average occupancy in the third quarter because not every hotel will enjoy the benefits of the programme.

"Hotels in resort destinations or famous tourism areas, such as Hua Hin and Pattaya, will be packed, but lesser-known provinces will receive minimal advantage from this programme," Ms Supawan said.

Philippines says no compromise on 2016 sea victory against China

The Philippines will adhere without compromise to a 2016 court victory that nullified China’s claims in most of the South China Sea, its top diplomat said.

HONG KONG: Hundreds of thousands of Hong Kong citizens queued to cast ballots over the weekend in what the Chinese-ruled city's opposition camp says is a symbolic protest vote against tough national security laws directly imposed by Beijing.

The number of coronavirus cases in Indonesia exceeded 75,000 as infections in the two largest hotspots continued to accelerate after the government eased physical-distancing curbs more than a month ago.