An economic pillar of developing economies is crumbling because of coronavirus impacts; 'I'm scared sick.'

Migrant workers--from Polish farmhands working the fields of southern France to Filipino cruise-ship workers in the Caribbean--who lost their jobs because of the pandemic's economic impact are running out of cash to send home, dealing a blow to the fragile economic health of the developing world.

Tens of millions of Indians, Filipinos, Mexicans and others from developing countries working overseas sent a record $554 billion back to their home countries last year. That's an amount greater than all foreign direct investment in low- and middle-income countries and more than three times the development aid from foreign governments, according to the World Bank.

The drop-off in the payments, known as remittances, has affected life for millions around the globe who rely on the cash for food, fuel and medical care. Families from South Asia to Latin America can't afford mortgage payments and tuition.

"There are households that critically depend on the remittance lifeline, and that lifeline has been ruptured," said Dilip Ratha, lead economist on remittances at the World Bank, which estimates that the transfers to developing countries will decline by 20% this year.

That drop would be four times as big as the fall that followed the 2008 financial crisis and the largest drop since the World Bank began recording remittance data in the 1980s.

In El Salvador, remittances plunged 40% to $287 million in April, contributing to a food crisis. Slum dwellers have hoisted white flags outside their homes to signal they're hungry, as local charities struggle to fill the gaps.

In Bangladesh, remittances for April dropped 24% from a year earlier, adding pressure to an economy that saw clothing exports--another key source of foreign exchange--plummet 85% that month.

In a measure of the breadth of the economic crisis brought on by the pandemic, even the Philippines is seeing cash inflows drop. Its workers travel all over the world seeking employment in a wide range of industries, few of which have been spared. That geographic and professional diversity has insulated remittance payments to the Pacific island nation of around 107 million during previous downturns. But not this time.

But he said that given how deep and widespread the pandemic is, his bank is predicting a drop of 5%, or about $1.5 billion, in annual remittances this year. Other researchers predict a decline of up to 20%.

Mr. Diokno said he wasn't worried about the country's balance of payments, and noted the peso has been strong.

Mitzie Espiritu, a 34-year-old fitness-center employee who left the Philippines five years ago to work in Dubai, was called into a company meeting in March and told she would be suspended without pay from the job that allowed her to support a niece and nephew back home.

She flew back to Manila at the end of May, unable to afford to remain in the emirate. She would return to Dubai if work materialized again, but she's not optimistic. "I don't see any urgency for our clients to go back to the gym."

Ms. Espiritu recently received word from the gym that her employment there was officially terminated.

In the aftermath of the 2008 financial crisis, remittances to the Philippines rose 21% between 2007 to 2009. Money sent from Australia, Qatar and Japan helped offset decreased transfers from America. By contrast, inflows to Mexico, which relies heavily on remittances from the U.S., dropped 18% in that period.

Today, an estimated 10 million Filipinos live abroad--approaching 10% of the total population--many working as maids in Taiwan, hotel staff in the Middle East and nurses in the U.S.

Those workers sent $35 billion back to their home country last year, according to the World Bank, accounting for nearly 10% of the country's gross domestic product. 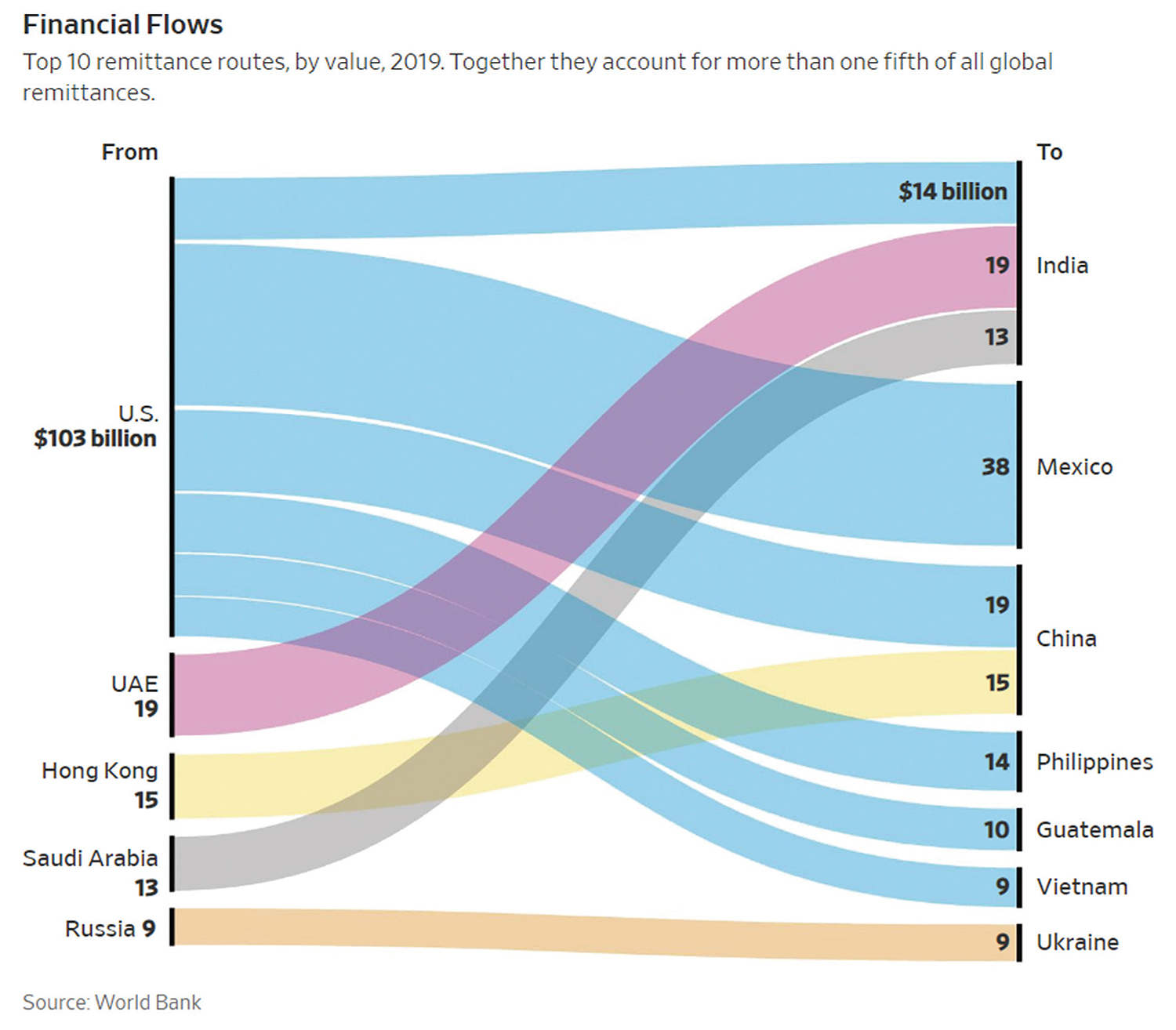 Filipino croupiers in the casinos of Marrakesh have lost their jobs, as have car washers in Macau. Cruise-ship workers have flown back from the U.K. and office staff from Dubai.

Government figures from early June show around 350,000 Filipino overseas workers are displaced, which means they have been laid off or aren't receiving their salaries due to local lockdowns.

"Back in the day, the natural hedge of having Filipinos across the globe really helped," said Nicholas Mapa, a senior economist for ING Groep NV, an international bank.

He said Covid-19 negated this advantage: "It's hit everywhere, so having Filipinos everywhere doesn't really help."

Mr. Mapa doesn't predict a quick recovery, in part because a high percentage of Filipinos are concentrated in sectors like hotels and restaurants that are expected to struggle in a socially distanced world.

Remittances could fall this year by 10% to 20%, according to research by Alvin Ang, an economics professor at Ateneo de Manila University, and Jeremaiah Opiniano, a journalism professor who runs a research nonprofit on migration. That would represent the largestdecline in the nation's history.

A government program that provides $200 to workers who have lost overseas jobs was quickly oversubscribed. As of early June, payments had gone out to 145,000 workers out of the 450,000 requests the government received.

Jessalyn Tanedo, a 27-year-old call-center employee in the capital, Manila, said that in March, her mother, a maid in a household in Sicily, stopped wiring the usual $130 a month that paid for food and electricity for Ms. Tanedo's grandparents. Local lockdown measures on the Italian island had made it impossible for her mother to visit her client.

She has since returned to work, but hasn't resumed regular transfers, saving her income in case Sicily locks down again or if she needs to get on a flight back home.

"I have instructed my grandparents, who live in a town four hours outside of Manila, to gather firewood in case there is no money and we run out of gas," said Ms. Tanedo, adding "they've had to cut down on food expenses.''

The Philippines' reliance on money from abroad dates back to the 1970s, when demand for labor on oil rigs and construction projects in the Persian Gulf spiked.

With limited job opportunities at home, then-President Ferdinand Marcos instituted a new labor code that facilitated employment agencies to recruit Filipinos for overseas work, laying the foundations of a system that would soon send millions abroad.

Over time, the government took a more active role in overseas workers' welfare, including by establishing a fund under the department of foreign affairs to assist migrant workers with legal difficulties.

Going abroad became a part of Filipino culture. Money coming in from overseas funds construction of new houses in villages and down payments on cars. Remittances are often the basis for business loans and mortgages, as banks see money from abroad as a stable income source.

The Philippines government accommodates citizens working abroad by allowing them to vote in national elections and exempting them from paying income tax on money earned abroad.

Ms. Espiritu, the fitness center employee, is a second-generation overseas worker. When she was a girl, her mother moved to Hong Kong to work as a domestic helper and her father worked aboard cargo ships. Relatives raised her in the capital Manila, and, later, in her father's village near an active volcano.

After graduating from high school she returned to Manila to study nursing with money her parents sent home. Unable to find a job in her chosen field, she worked at a call center for $400 a month. Five years ago, she made the decision to go abroad, in part to support her young nephew and niece.

After living off savings for nine months, she found jobs in retail that paid her $800 a month. In November of last year, Ms. Espiritu got a job in sales at the fitness center and her salary doubled again.

She sent half her earnings home to pay for her niece's and nephew's education and their daily expenses. In January, the Taal volcano erupted near her home village, and she wired most of her savings to repair her family's damaged home and pay for temporary accommodation for her mother, who had retired and moved back home.

Late on rent and no longer able to afford living in Dubai, Ms. Espiritu flew home at the end of May.

Her family's other source of foreign income also looks shaky. Her father works on a tanker vessel, loading goods onto the ship, but his contract expired earlier this year. He's been able to keep working because the crew that was supposed to replace him hasn't been able to do so amid travel restrictions.

"We are scared of what will happen tomorrow," Ms. Espiritu said.

Her father is one of around 400,000 Filipino seafarers working on commercial vessels--including cargo, fishing and cruise ships--making up roughly a quarter of the world's total. Remittances from Filipinos at sea have grown 70% over the last decade.

The cruise industry is one of the hardest hit by the pandemic. Many Filipinos working aboard cruise ships as entertainers, electricians, waiters and repairmen had their contracts cancelled after cruises were canceled.

Wilfredo Tojon Zafe Jr., 39 years old, was ready to board a plane in March to Miami, where he was to spend the rest of the year working as a waiter at a cruise-ship restaurant. Just as he arrived at Manila's airport, he got a call from his employment agency that the cruise had been canceled.

It was a shock to his family. He'd been working on cruise ships since he was 23, in recent years sending back $600 a month to his family in a suburb a few hours outside of Manila. It was enough to enroll two of his sons in private school. Mr. Tojon Zafe is arranging a meeting with the principal to see if he can defer payment and keep his kids in school.

He and his wife have started baking traditional coconut desserts and selling them to his neighbors. To supplement the income he has begun moonlighting as a package-delivery man. But he said finding a decent-paying job at home is hard.

After Mr. Tojon Zafe's contract was canceled, he asked his employment agency to hire him first when a cruise job opens up. "When the sea calls us to work again, I will do everything to put my family in a normal way of life," he said.