After losing market share to the Chinese firm and rival Ericsson, the Finnish giant reverses course on computer processors

In the global race for 5G supremacy, Nokia Corp. bet big on the wrong computer chip.

The Finnish giant invested in a costly processor to power the hardware it has been selling to wireless carriers, which are now building out 5G networks around the world. Customers, though, preferred a cheaper, less energy-intensive version offered by rivals Huawei Technologies Co. and Ericsson AB.

Now, with a new chief executive taking over next month, Nokia is scrambling to make up market share lost to those competitors in the wake of the chip mistake.

After realizing its blunder in 2018, Nokia replaced the head of its wireless-equipment business with Tommi Uitto, who started a two-year restructuring program that Nokia says is now starting to pay off.

He has doubled the research-and-development staff focused on making cheaper chips.

He also diversified from one chip supplier to three: "We got into this trouble by relying on only one."

The restructuring comes after a tumultuous few years for Nokia, punctuated by the planned departure of CEO Rajeev Suri, who next month will be succeeded by Pekka Lundmark.

The former chief of a Finnish clean energy-firm, Mr. Lundmark worked at Nokia 20 years ago.

Mr. Suri assembled a company that focuses on selling the entire spectrum of equipment that wireless carriers and landline cable-and-internet providers need to build 5G networks.

Such networks promise superfast speeds and the ability to connect a new universe of devices to the internet.

Mr. Suri bet that by offering the same breadth of products as Huawei, Nokia could make inroads into the Chinese company's leading market share.

Nokia was also poised to benefit from a yearslong assault by the Trump administration against Huawei. Washington accuses it of being beholden to Beijing. U.S. officials have sought to limit Huawei sales around the world, warning that China could order Huawei to use its gear or employees to spy on or disrupt networks, a charge that Huawei and China deny.

But by betting on the wrong chip in the early stages of its 5G product development, Nokia has fallen even further behind. 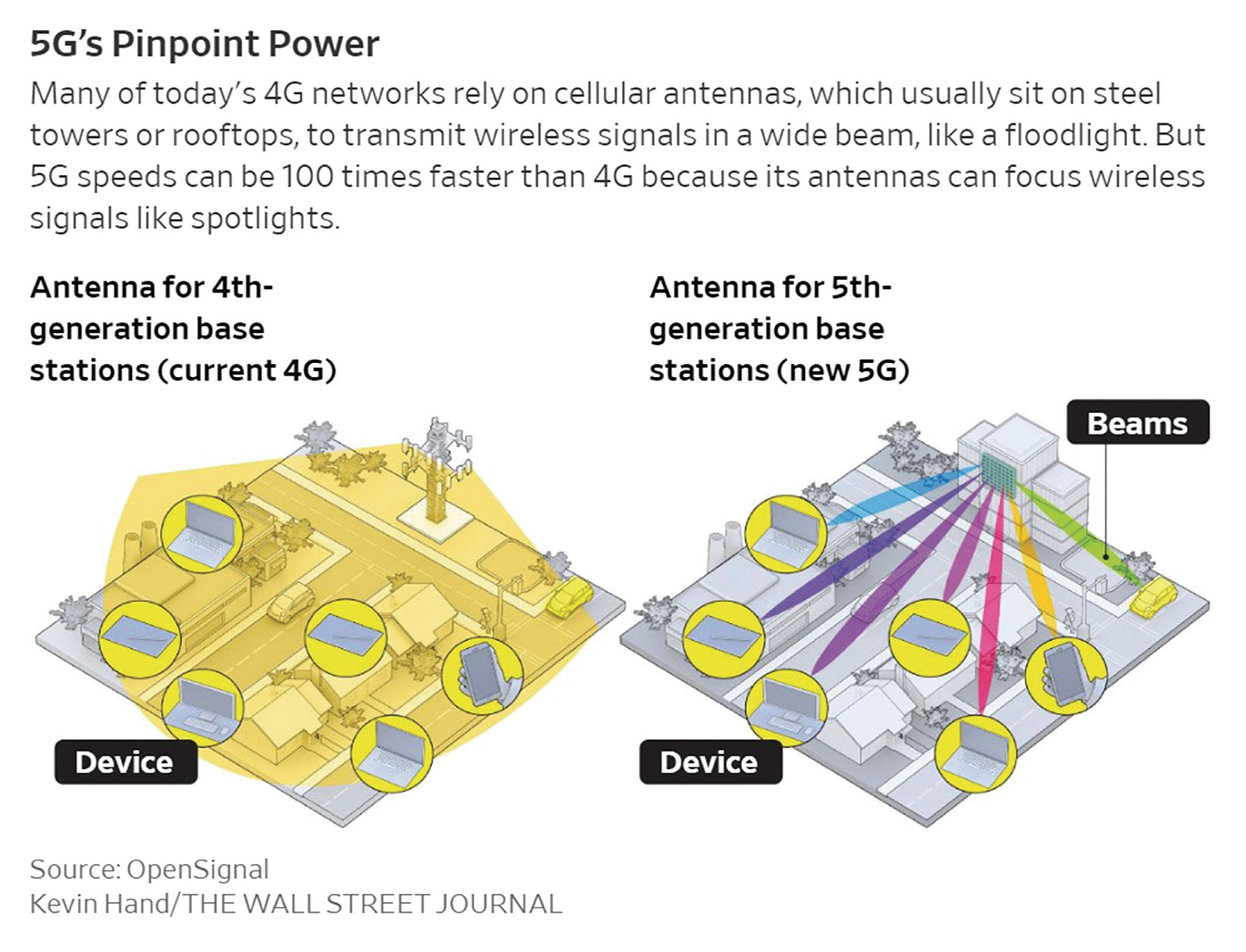 Last year, Huawei increased its global share of the telecom gear market to 28.3%, from 27.5% in 2018, according to telecom-research firm Dell'Oro Group.

With no major American player in the industry, U.S. officials have looked on with dismay, worried that both Nokia and Ericsson won't be able to compete with Huawei in the long run.

They have toyed with shoring up both European players, through tax breaks and export-bank financing, The Wall Street Journal has previously reported. They have also prodded Cisco Systems Inc. and private-equity firms to consider a buyout, the Journal reported.

Nokia's chip mistake came as it and its rivals were racing to master the contours of 5G even as the technology's technical specifications hadn't been fully worked out.

Many of today's 4G antennas send wireless signals in a wide cone, like a floodlight. But in 5G, some antennas concentrate those signals like spotlights.

Each antenna can concentrate multiple spotlights on one device, or simultaneously on several different devices, such as a cellphone, a driverless car or a factory component. This innovation should allow 5G antennas to transmit data 100 times faster than 4G networks.

To make this happen, an antenna and its related circuitry needs computer chips inside, perhaps five or more. The chips are so crucial to making the system work that Washington, in one of its more recent attempts to weaken Huawei, restricted semiconductor makers from supplying the Chinese company with them.

Nokia selected the type of chip it thought would work best before an important technical debate had been settled, Mr. Uitto said.

A telecom-industry consortium that included Nokia hadn't finalized the standards for how cellular antennas should communicate with phones and other devices.

Nokia had two options. One is called a "system-on-chip," or SoC. Advantage: It is power efficient and cheap to make. Disadvantage: Once the chip is made, it is difficult to reprogram. If Nokia ordered a supply of SoC chips and then 5G standards didn't support them, the company would have a bunch of useless chips.

The other option was the so-called field-programmable gate array, or FPGA, chip. Its advantage was flexibility. An FPGA can be reprogrammed after it goes into an antenna. Nokia could start making antennas with the chips, and wireless carriers could reprogram them to suit whatever 5G standards would be adopted later.

Nokia focused on the more expensive FPGA. When the development of 5G accelerated, and standards crystallized sooner than expected, around 2018, Nokia realized it had too many FPGA chips and not enough of the cheaper ones that Huawei and Ericsson had bet on.

The FPGA was like "buying a car with a lot of features that you don't use," said Sandro Tavares, Nokia's head of mobile marketing. The SoC, meanwhile, "has exactly what you need, so you're not spending that much money there."

One European telecom executive said the price tag for certain Nokia equipment was double that of products by Huawei and Ericsson using the SoC chips.

Earlier this year, Nokia released SoC-based products comparable to Huawei's and Ericsson's. Mr. Uitto said 35% of Nokia's shipments this year will have SoC chips, a number that will be 100% by 2022.

Vietnam to suspend flights to, from 7 African countries over Omicron fears

HANOI: Vietnam will suspend flights to and from seven African countries over concerns about the spread of the Omicron coronavirus variant, state media reported on Wednesday.

SYDNEY/JAKARTA: China told Indonesia to stop drilling for oil and natural gas in maritime territory that both countries regard as their own during a months-long standoff in the South China Sea earlier this year, four people familiar with the matter told Reuters.