All eyes on the horizon
Business

All eyes on the horizon

The worst may still be in store for Southeast Asia's second-largest economy,

Hopes of a second-half economic recovery have been fanned by policymakers, but the latest macroeconomic statistics suggest that the worst may still be in store for Southeast Asia's second-largest economy.

Under the central bank's scenario, the Thai economy hit rock bottom in the second quarter. But the projection of an 8.1% contraction for the full year does not take into account a second-wave outbreak.

The rate-setting Monetary Policy Committee has said economic activity will gradually recover in the second half of this year in countries that can effectively contain the outbreak, including Thailand. The contraction rate is expected to narrow in the third and fourth quarters.

But such optimism may be wishful thinking, as the rosy scenario could be quashed by a myriad of looming uncertainties -- be they domestic political instability, another possible virus outbreak in Thailand or various external headwinds offsetting exports and tourism recovery.

The recent baht depreciation mirrors foreign investors' concerns about the continuity of the government's economic policies after the resignations of Deputy Prime Minister Somkid Jatusripitak and four other key officials.

"Political noise does not bode well for consumer and business sentiment," said Tim Leelahaphan, an economist at Standard Chartered Bank Thai. "While the government has sufficient borrowing room to support the economy, political stability is crucial -- especially with the fiscal package, which includes government borrowing, being rolled out. We will also [have to] monitor the risk of default by businesses and households after the phase-out of support measures." 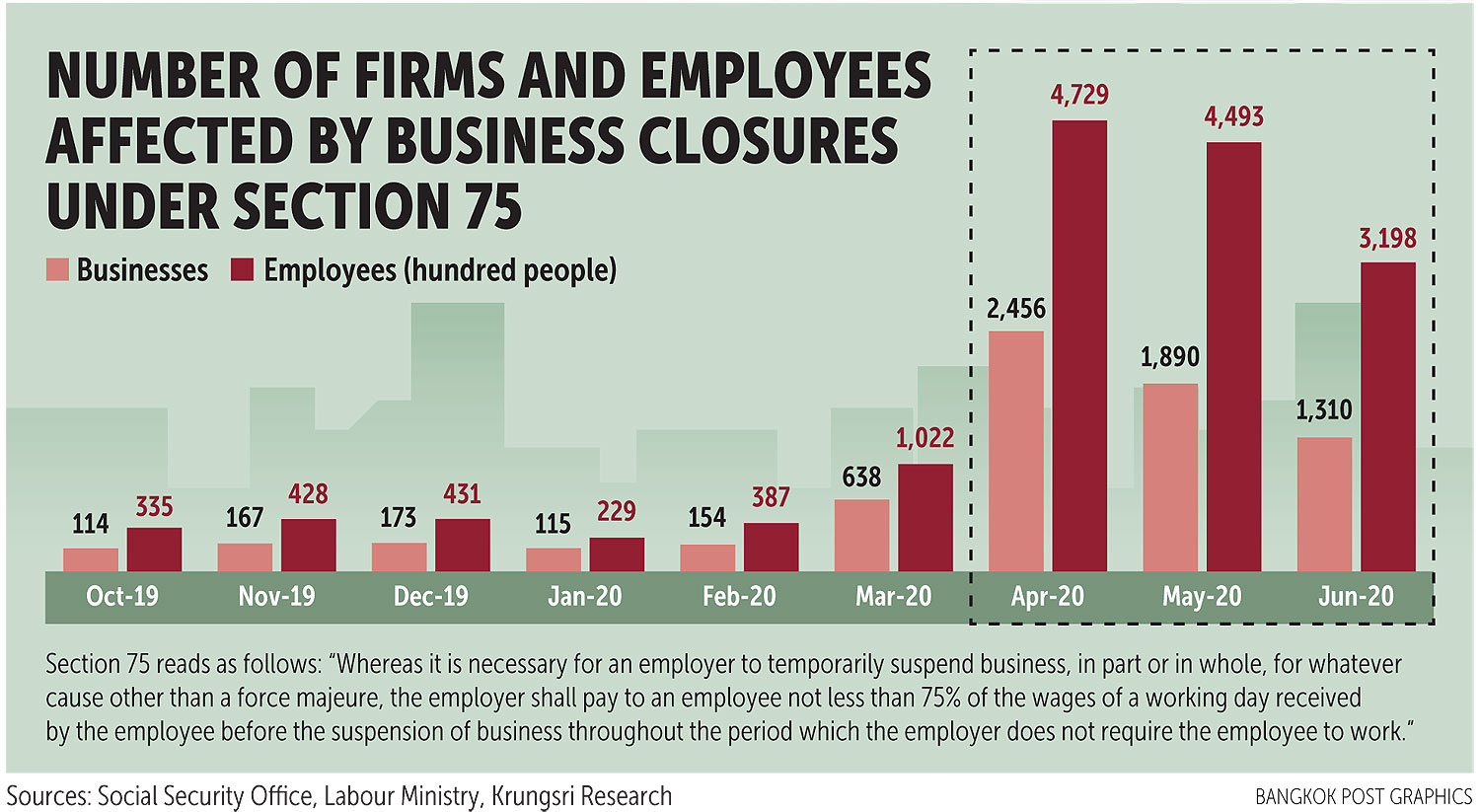 Chairat Trirattanajarasporn, president of the Tourism Council of Thailand (TCT), said that while the Bank of Thailand believes the economy already cratered in the second quarter, the tourism industry has yet to see the worst of a tragic scenario.

"Thai tourism will continue to fall deeper as long as our borders remain closed to international tourists," he said.

After the Tourism and Sports Ministry assigned tour operators to design new tour packages in designated areas for international arrivals who will visit Thailand under travel bubble schemes, the TCT and the Association of Thai Travel Agents finished drafting itineraries that require strict screenings, numerous Covid-19 tests and a tracking system.

But the package price could be twice that of the usual package, as there is a mandatory list of things to do and additional services in the programme.

Mr Chairat said the higher cost could be an obstacle for reviving the international tourist market, given that guests will be concerned about paying more for new practices they have never experienced before.

He said that when the travel bubble scheme is implemented, the Tourism Authority of Thailand should arrange media and agent familiarisation trips to test the waters first.

Those front-liners can help publicise the new types of tour packages and assure people about health and safety measures and other services they can expect while travelling in Thailand.

Mr Chairat said the tourism economy will gain momentum if tour operators can convince tourists that they can provide good and safe services.

"The way we have to introduce packages under the travel bubble scheme is like we're starting a new campaign afresh," Mr Chairat said. "State agencies should fully or partially support media, bloggers, influencers and tour agents to join the programme and let them see that a more expensive price is worth purchasing. More tourists will then follow."

A source from the Thai Retailers Association who asked not to be named said the coronavirus has compounded the blow to the retail industry from widespread drought, evaporating tourist arrivals, overall tumbling tourism and rising unemployment.

The association expects total retail sales to drop by 5-10% in the first quarter of this year. The figures were forecast to plunge by 25-45% in the second quarter. The rate of the impact varies, depending on businesses, but tourism-related businesses are expected to feel the hardest blow.

According to the source, the industry's prospects remain worrisome in the third quarter. What concerns retailers the most is rising unemployment and the plight of small and medium-sized enterprises, which have been suffering from tight liquidity and difficulty in securing fresh loans.

As a matter of fact, Thailand's 3.8-trillion-baht retail market has reported weak gains of 2-3% over the last few years, trailing GDP growth.

This year, the overall retail market expects the worst performance in its history, worse than any crisis in the past.

According to the association's prediction, as many as 4.5 million workers in the retail and service industry stand to lose their jobs. Unemployment figures may be lower than that if the government reinstates Taste-Shop-Spend tax incentives, the source said.

The retail and service industry is estimated to employ 19 million workers.

Moreover, it asked the government to waive property tax and signboard tax for the 2020 and 2021 tax years and reinstate the Taste-Shop-Spend tax breaks between June and December. 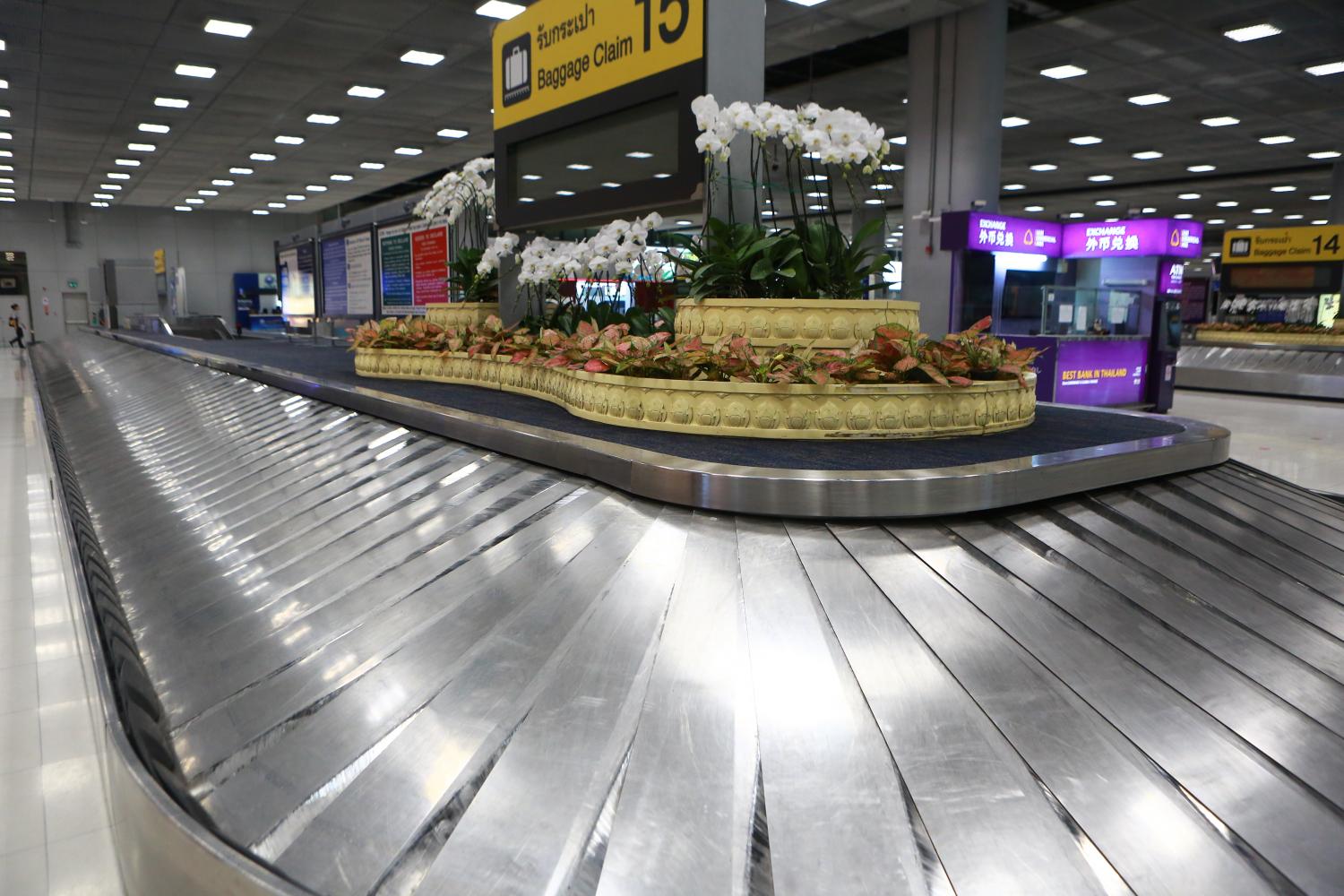 Suvarnabhumi airport's arrival hall remains empty without tourists. According to the Tourism Council of Thailand, the tourism industry has yet to see the worst of a tragic scenario. Somchai Poomlard

The staggering automotive industry is expected to revive in the second half of 2020, though a second outbreak of Covid-19 is still a wild card, industry leaders say.

They do not limit the recovery period to the third quarter, but rather prefer to give an outlook for a longer period -- the next six months of 2020.

The Thailand Automotive Institute (TAI) under the Industry Ministry expects car production in the country to reach 1.4 million units this year, half of which will be exported.

The numbers are less than in 2019, according to the Federation of Thai Industries (FTI), when total production was more than 2 million. But the TAI said the all-year figures reflect some improvement in the auto sector, which was severely pressured by the pandemic in the second quarter.

"The TAI hopes there will be no second outbreak here," said president Pisit Rangsaritwutikul, adding that a new wave of infections would shatter hopes for the automotive recovery.

"We don't want to see incidents like the one in Rayong again because it caused panic and hit the economy," he said.

Mr Pisit is looking forward to positive prospects for the car industry after Thailand, along with other countries, eased lockdown measures and launched economic stimulus packages.

Many people are still afraid to travel on public transport. This feeling may compel them to consider buying a car.

"It's like the new normal in the automotive industry because more people may buy new cars," Mr Pisit said.

The TAT has seen good signs in the pickup truck segment after sales kept increasing in May and June.

Wichit Wongwatthanakan, managing director of Ford Thailand, said the increase may partly result from unemployment, which causes many people to change jobs.

"Pickup trucks may be part of their new job," he said.

Surapong Paisitpatanapong, a spokesman for the FTI's automotive club, expects domestic car sales to reach 60,000 units as a monthly average in the second half of the year.

"The stimulus packages will create more confidence in the economy among consumers and boost their spending," he said.

But Surasak Suthongwan, vice-president of Toyota Motor Thailand, said his company cannot relax its close watch on the situation.

Although he also believes that the car market will improve later this year, the prospect of a return of Covid-19 is a burning question.

A guard at a Bangkok shopping mall wears a face shield and mask as a new normal way of life following the Covid-19 outbreak. PATTARAPONG CHATPATTARASILL 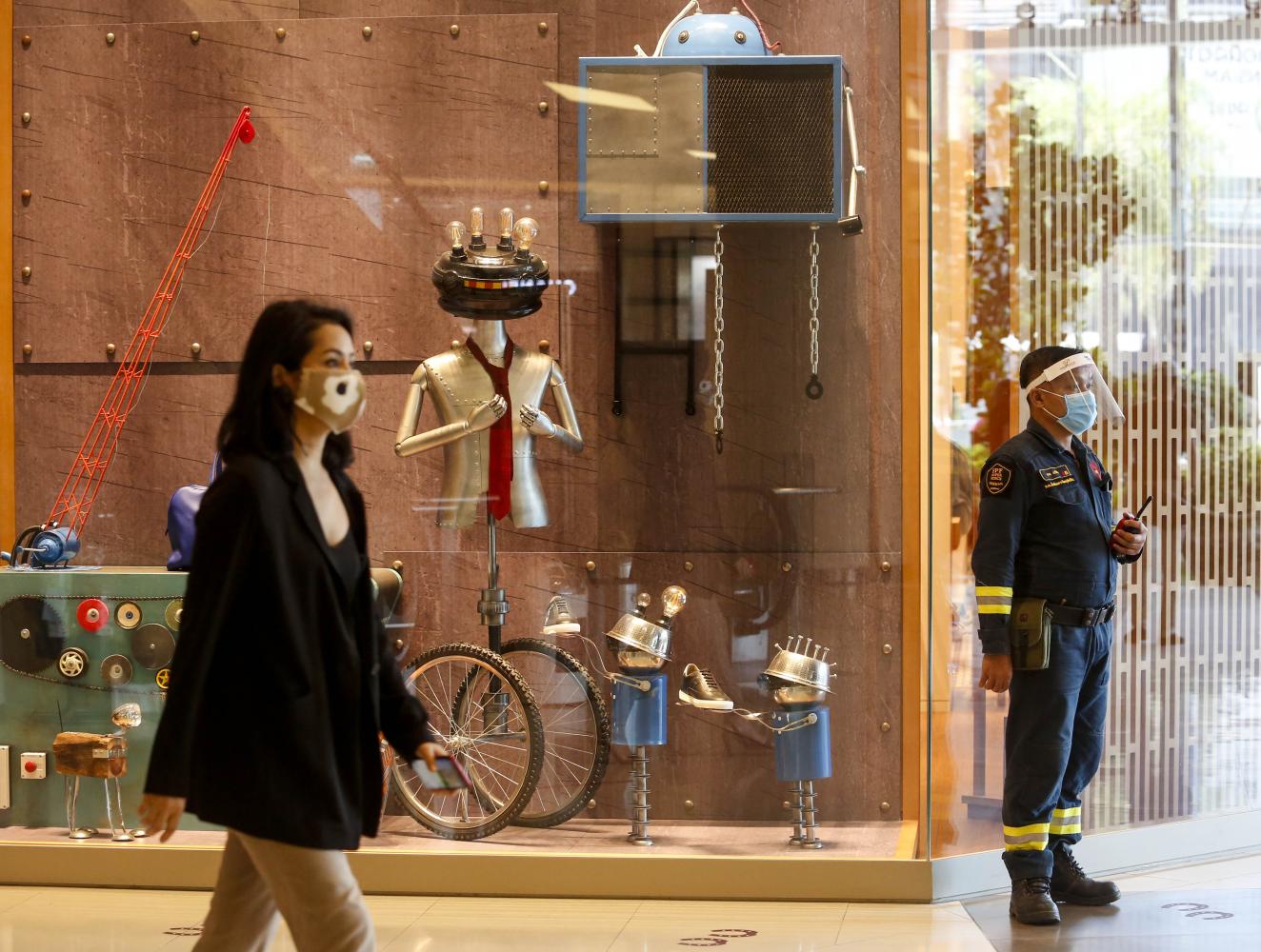 A visitor and guard at a Bangkok shopping mall wear face masks as a new normal way of life following the Covid-19 outbreak. PATTARAPONG CHATPATTARASILL 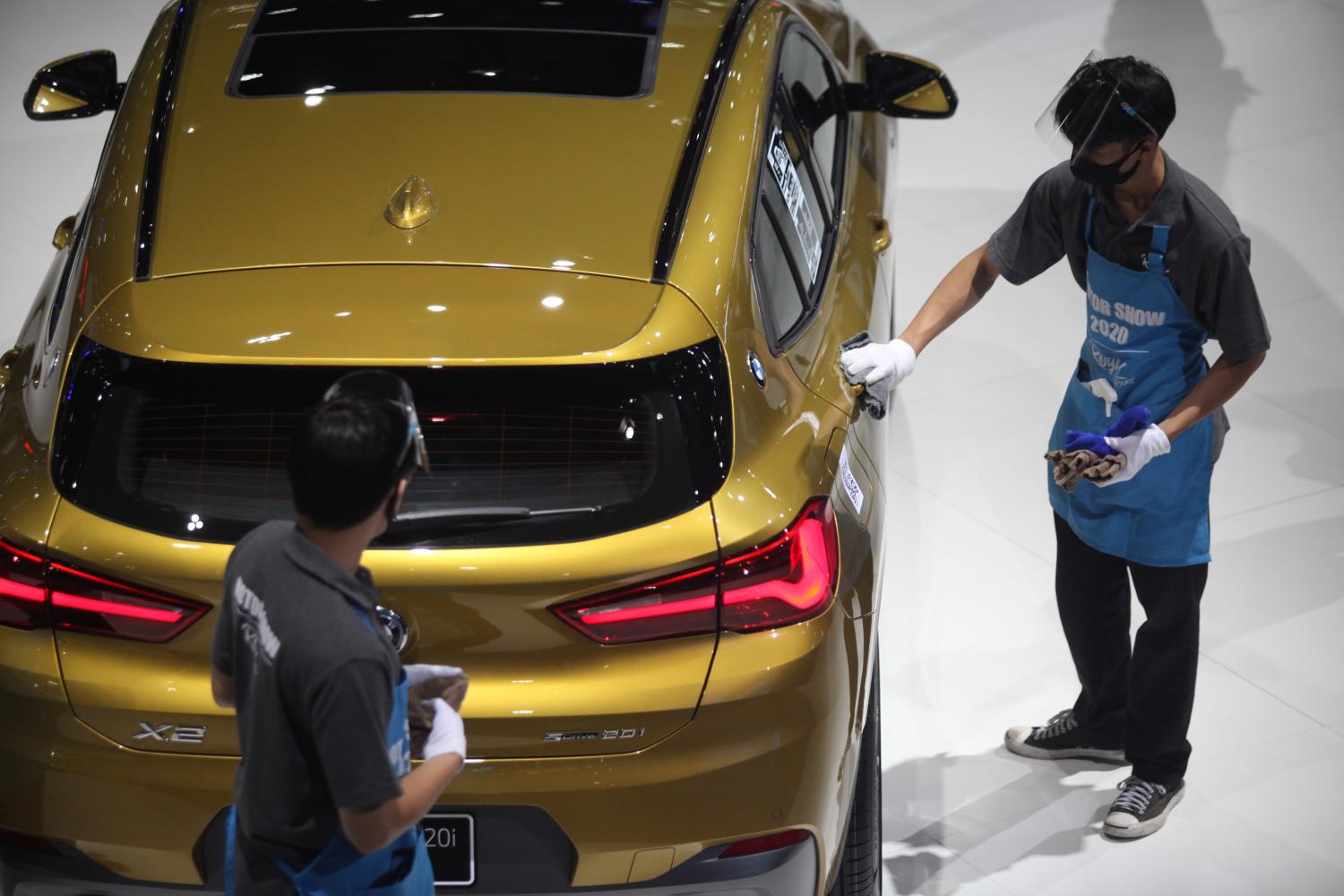