Rice exports poised to drop in next decade
Business

Rice exports poised to drop in next decade

Thailand risks dropping to No.5 in rice exports over the next decade if the country remains complacent and does not develop a long-term rice strategy for seeds and competitiveness, warns the Thai Rice Exporters Association.

Charoen Laothammatas, the association's president, said on Wednesday Thailand is expected to see a continuous drop in exports as the country's current rice policy lacks continuity or a long-term development plan.

Thailand also has a limited R&D budget for rice, he said.

"The first priority is the limited budget for R&D of rice seed development, particularly for soft-textured white rice which is now in high demand in the world market," said Mr Charoen.

"Thailand's production costs are relatively higher than those of competitors, while higher logistics costs and the strong baht have made Thai rice prices become more expensive than the grains of competitors."

He said alternating drought and flood disasters have affected Thailand's rice production and a lack of accurate data on rice has made it hard to devise effective marketing plans.

"For long-term strategies, related authorities are being urged to speed up their consideration of the entire supply chain in the rice industry, be it seed development, rice millers, paddy rice traders, seed manufacturers and traders, packed rice producers, or rice exporters," said Mr Charoen.

He said other rice producers such as China have spent a lot of money on R&D to raise their rice yield. China's rice yield is now around 2 tonnes per rai, while Vietnam's yield is around 960 kilogrammes per rai and Thailand's is 450kg per rai. 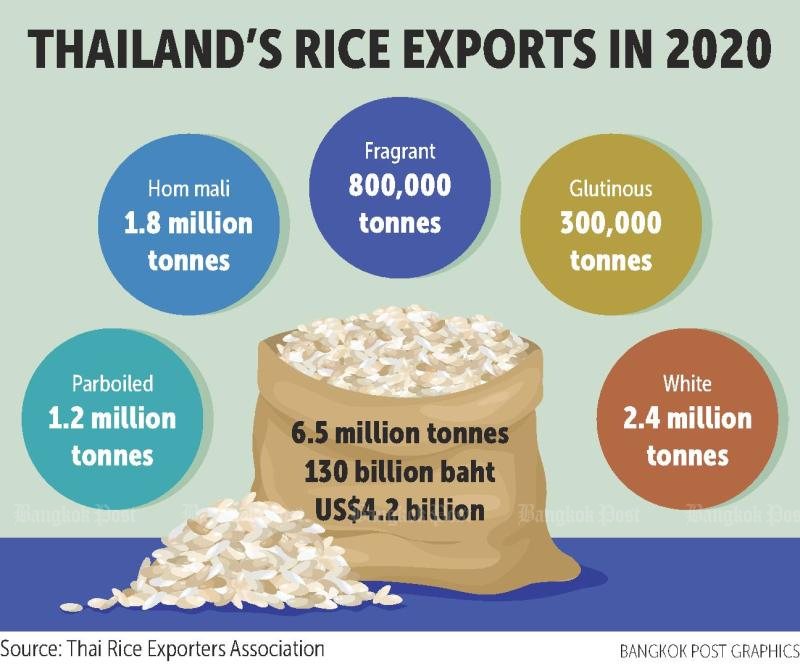 It cited a host of negative factors, including the coronavirus crisis that weakened global demand, a strong baht that makes Thai rice more expensive, and continued drought cutting into production.

Thai rice prices are US$30-80 a tonne higher than those of competitors because of the strong baht, while the widespread drought has cut the domestic rice supply by 20% or 5 million tonnes of paddy rice this year.

According to Mr Charoen, important rice importers such as the Philippines, Malaysia and China favour soft-textured rice, but Thailand has yet to churn out the soft-textured grains.

This year China's import demand is expected to decrease given the mainland's relatively high rice stock of 117 million tonnes compared with a normal level 60-70 million tonnes.

China became a net exporter this year, expected to ship about 3.5-4 million tonnes of rice to Africa.

"Thai rice exports in the second half this year are expected to slow down, as the Covid-19 outbreak in April has triggered rising demand and led several countries to beef up their domestic rice stocks in the first half," he said.

"The new economic team should think about accelerating Thailand's rice competitiveness development and reining in the foreign exchange rate at 32.5-33 baht per US dollar." 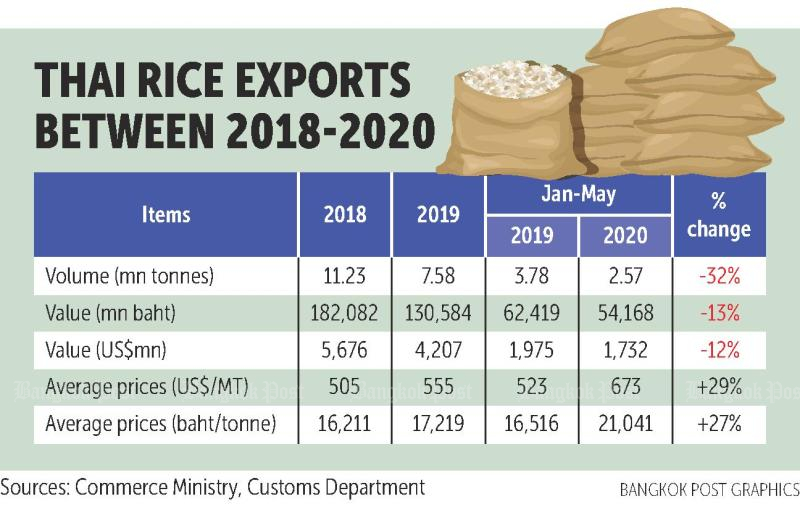 In the first half of this year, Thailand shipped 3.14 million tonnes of milled rice, down 32.7% from the same period last year, with export value down 12% to $2.2 billion.

For the period, Thailand was the world's third largest rice exporter, trailing India and Vietnam, which shipped 4.53 million tonnes and 4.04 million tonnes, respectively.

Thailand began their third and final week of the preliminary round of the 2022 FIVB Volleyball Women's Nations League with a win over South Korea in Bulgaria, on Wednesday.