Demand from both buyers and sellers

The domestic gold price hit a record for the fourth consecutive day, reaching 28,200 baht for one baht-weight of gold, an increase of 31.5%.

The local price continued its climb from 21,450 baht at the beginning of this year, reported the Gold Traders Association (GTA).

The price has accelerated every day this week, similar to global gold prices, with the weakening baht also supporting higher gold prices. 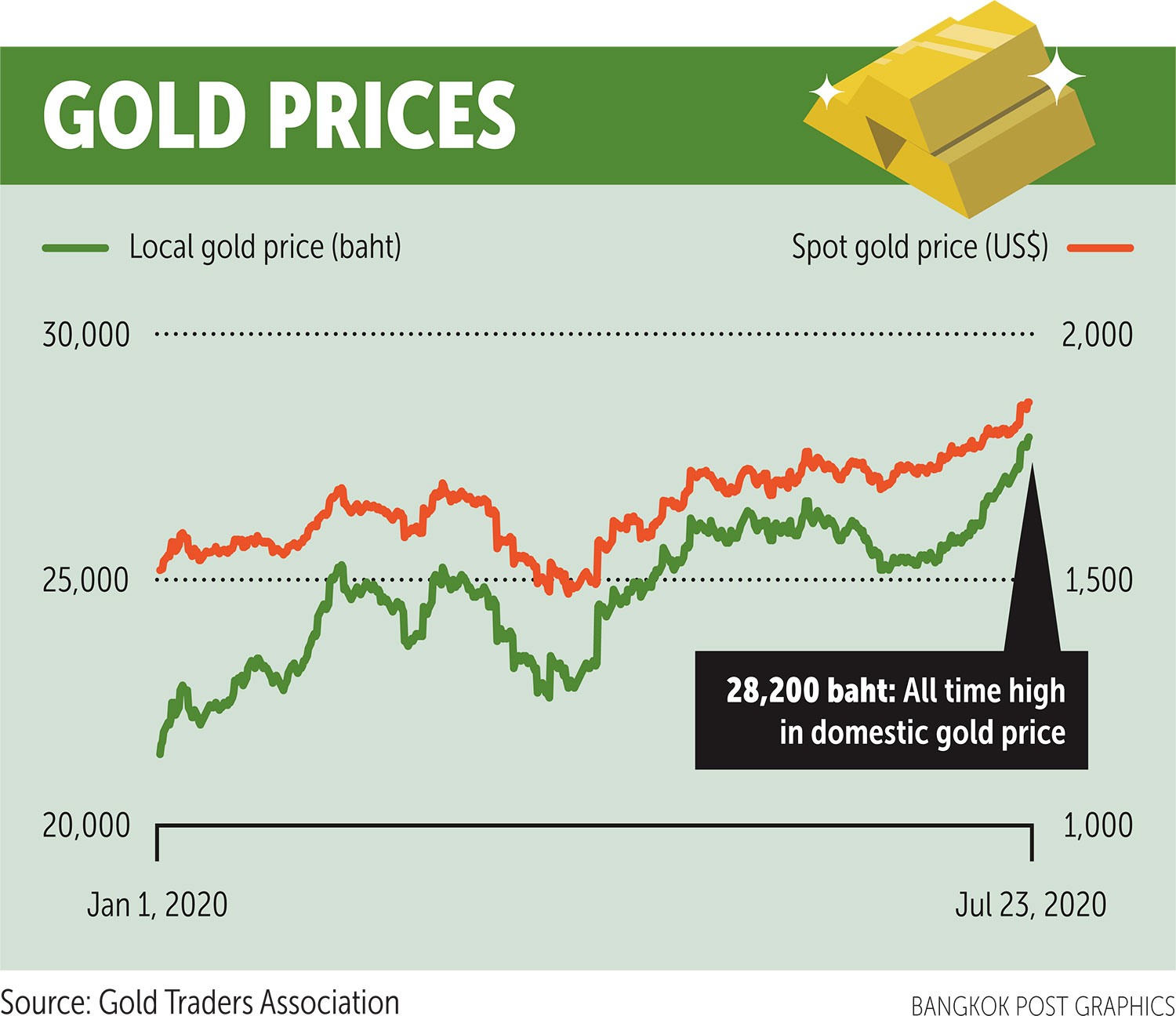 Tanarat Pasawongse, chief executive of Hua Seng Heng Group, said the movement of local gold prices and investor sentiment is different from the past five months.

"Sales yesterday were unlike the past three days, as some people bought even though the local gold price set a record high," Mr Tanarat said.

Unlike the past four months, he said, some people were eager to sell their gold for profit, but others wanted to hold on to see how high prices could reach.

Covid-19 and the US-China trade war have raised global and domestic risk, making gold a fallback safe-haven asset that continues to be popular, even as the price climbs further.

The rise in both local and global spot gold prices has also differed from 2011. Back then, the gold price reached a bubble of $400 within two months after S&P downgraded the US for the first time.

This year, the gold price has climbed gradually for seven months to gain $350 because of the Covid-19 crisis and its impact on the global economy.

The local currency in September 2011 was also stronger at 30 baht to the dollar when global gold prices touched $1,920.

Mr Tanarat said gold's upward trend is supported by many factors, including the creation of the EU's recovery fund worth €750 billion, the hope for US fiscal policy stimulus and the intensifying trade war that could have a big impact on the global economy.

The resistance line for spot gold has increased to $1,900.

"The gold price continues to trend up, but local investors should monitor the news closely, as the figure has risen considerably and may decline through profit-taking if there is news of a vaccine," Mr Tanarat said.

He said the position of SPDR Gold Shares (GLD), the largest gold exchange-traded fund, is a signal that investors should monitor information before deciding to take profit.

GLD continued to accumulate gold for 18 straight weeks and bought gold every day this week even as it touched a new high.