Lockdowns have made it harder for children and others to get help, with consequences that will last the rest of their lives.

Stay-at-home and lockdown measures have helped to contain the greatest public-health threat the world has seen in decades. But as Covid-19 receded in many countries, a new public-health crisis was emerging behind closed doors, with increased domestic violence against women and children. 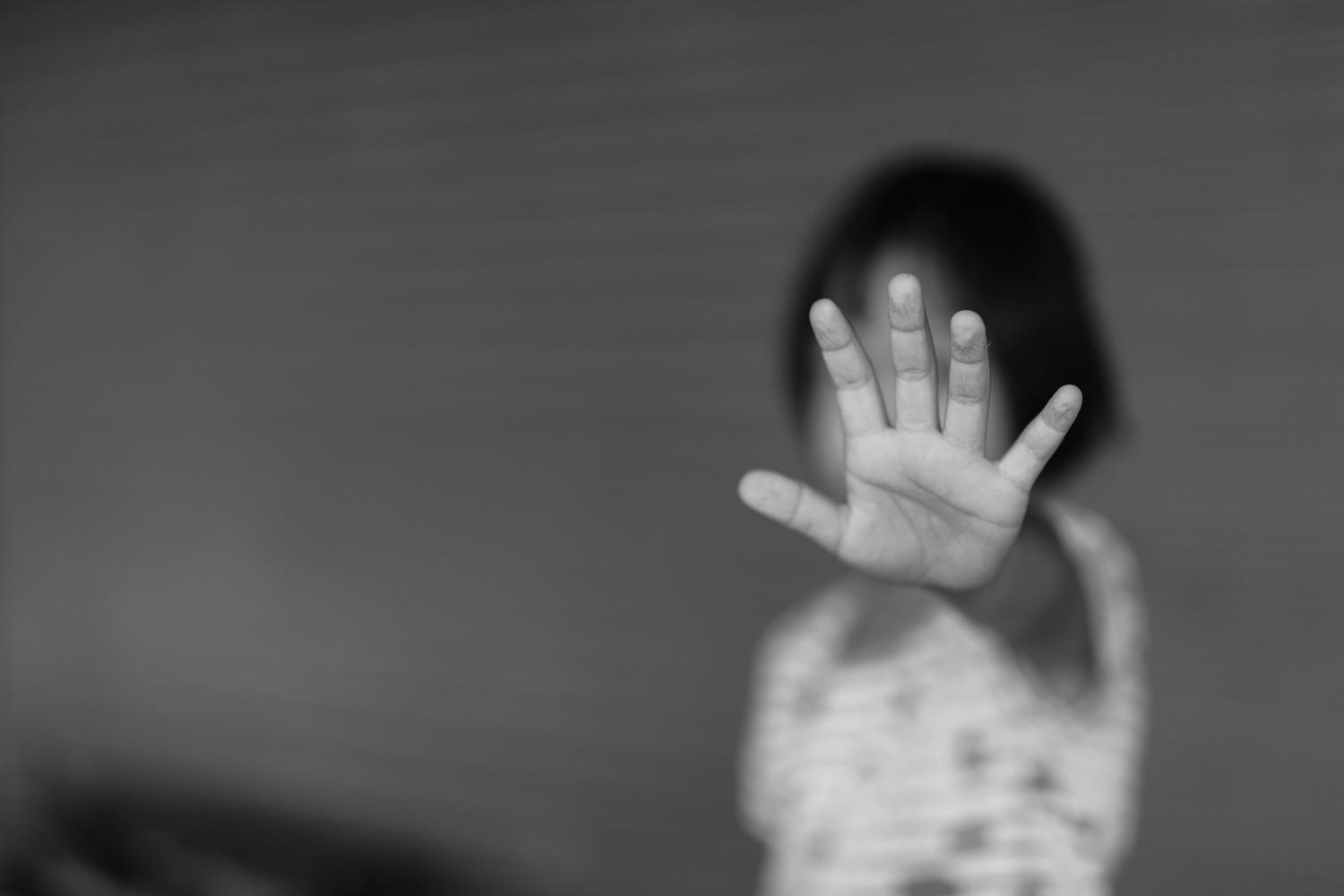 With people stuck at home and schools closed, it has become harder to tap the usual sources of support such as friends, extended family or professionals, leaving victims unable to seek and obtain help, say health professionals.

Stress occurring during the pandemic and economic instability have also been catalysts that exacerbate the risk of violence, according to the World Health Organization (WHO).

The UN Population Fund (UNFPA), meanwhile, estimated in May that if lockdowns continue for six months, an extra 31 million cases of gender-based violence could be expected globally.

"Often abused women and children are afraid to talk because of fear or shame. This 'window' to speak up and seek help is, during confinement, even more restricted," says Mariya Gabriel, the European Commissioner for Innovation, Research, Culture, Education and Youth.

"As a matter of fact, in some countries, we have seen an increase in reports of domestic violence since the outbreak of Covid-19."

Najat Maalla M'jid, special representative of the UN Secretary-General for Violence against Children, shared the same view, adding that "confinement measures and the disrupted provision of already limited child protection services exacerbated the vulnerability of children to various forms of violence".

Violence against children, according to the WHO, encompasses all forms of violence including abuse and neglect occurring to children under 18 years of age. It can be physical and/or emotional ill-treatment, sexual abuse, neglect, or other exploitation, which results in actual or potential harm to the child's health, survival and development.

The health agency's Global Status Report on Preventing Violence Against Children 2020, released last month, shed light on the prevalence of violence against children. It estimated that 300 million children -- nearly three out of four worldwide -- aged two to four years old regularly suffer physical punishment and/or psychological violence at the hands of parents and caregivers.

Moreover, one in five women and one in 13 men report having been sexually abused as a child (before age 17), while 120 million girls and young women under age 20 have suffered some form of forced sexual contact.

Maltreated children, when they enter adulthood, are at increased risk for behavioural, physical and mental health problems such as perpetrating or being a victim of violence, depression, smoking, high-risk sexual behaviours, unintended pregnancy, alcohol and drug abuse, according to the report.

The abused person is also more likely to become an abuser once they grow up. Therefore, violence is often passed down from one generation to the next, perpetuating a vicious cycle.

More alarmingly, the health agency also documented that every year, there are an estimated 40,150 homicides in children under 18 years of age, some of which are likely linked to maltreatment. The agency, however, said that a significant proportion of deaths due to child maltreatment are often incorrectly attributed to falls, burns, drowning and other causes.

Even though causes of maltreatment vary, the report emphasises that it is important to emphasise that children are the victims and are never to blame.

The report shows that characteristics of an individual child that may increase the likelihood of being maltreated include "being either under four years old or an adolescent, being unwanted, having special needs, having abnormal physical features, having an intellectual disability or neurological disorder, and identifying as or being identified as LGBT (lesbian, gay, bisexual, and transgender)", among others.

The economic costs of the lifetime consequences of violence against children are also severe: In the United States alone, the WHO estimated, the costs amount to US$228 billion per year.

To tackle the problem head-on, it's necessary to break the cycle of violence to create positive multi-generational impacts, by preventing child maltreatment before it begins.

This requires an approach involving multiple parties. Effective prevention approaches, according to the WHO, include supporting parents and teaching positive parenting skills and enhancing laws to prohibit violent punishment.

The less encouraging news is that only 47% of countries said these plans, laws and rules were being strongly enforced.

There is also a need to develop a quality education to empower children, allowing them to acquire knowledge, skills and experiences that build resilience and reduce risk factors for violence.

Further, a systemic shift in restrictive and harmful gender and social norms around child-rearing, child discipline and gender equality are required.

The report also suggests governments prioritise data collection on key violence-related indicators and use these to set measurable targets in national action plans. 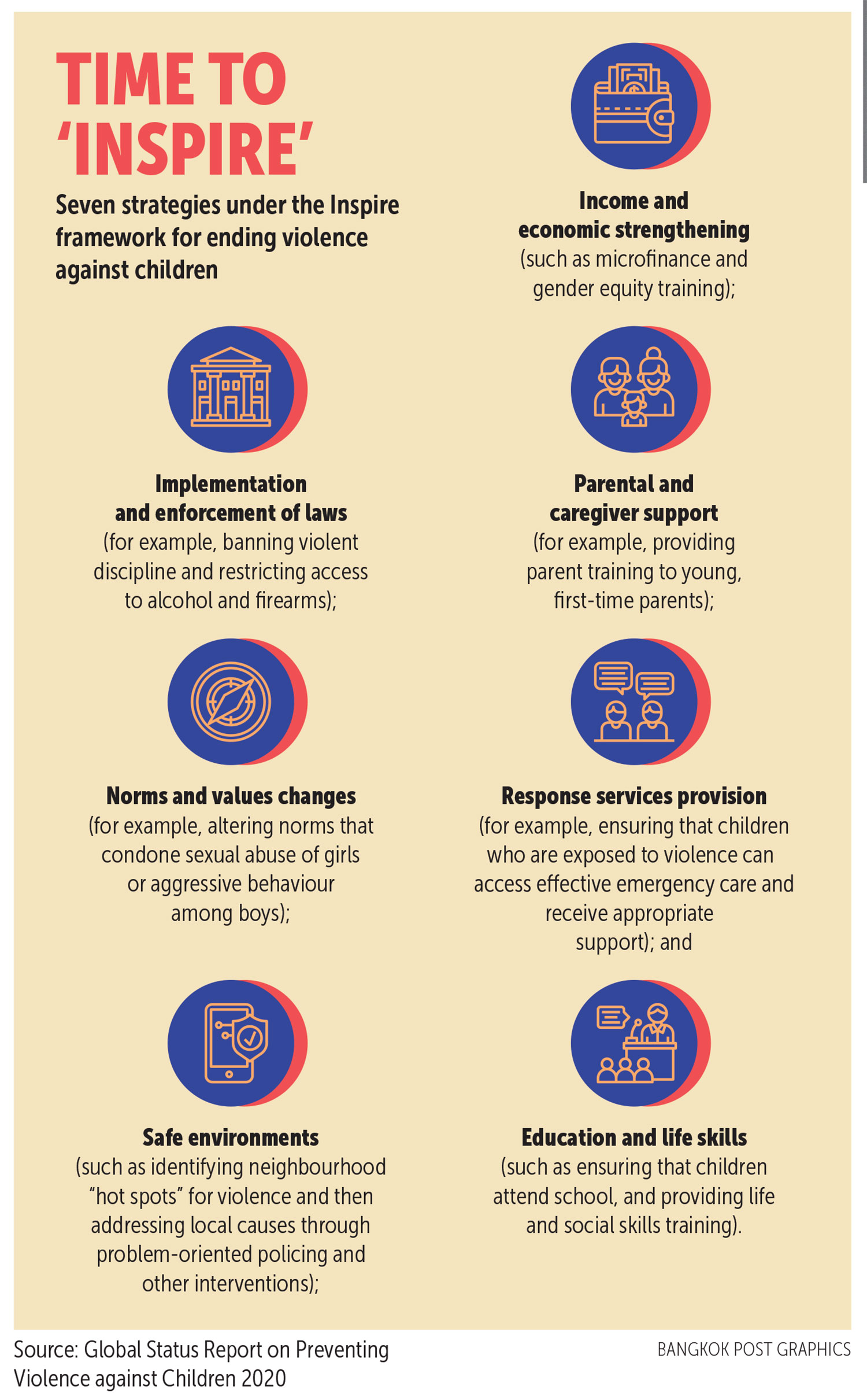 With the closures, online communities have played an important part in maintaining learning, support and play for many children. However, an increase in harmful online behaviour including cyberbullying, risky online behaviour and sexual exploitation have also been identified.

From Asia to Europe, cases of online child sexual abuse have soared as children spend more time online, making them more vulnerable to abusers as Covid-19 gave predators access to new groups of children who before the lockdown didn't spend as much time online.

In Australia, police warned that "insidious" online predators were targeting new victims after a surge in coronavirus infections put Melbourne under partial lockdown.

During the earlier lockdown, traffic to websites hosting online child sexual abuse content skyrocketed and such material posted to the dark web doubled, said the police.

"We suspect that offenders will use this second wave of Covid-19 as an opportunity to find more potential child victims, as young people spend an increasing amount of time online with limited adult supervision," Australian Federal Police Commander Jamie Strauss said.

In Australia, child exploitation has been on the rise in recent years. Nearly 22,000 cases were reported between July 2019 and June 2020, up by almost 50% from a year ago, official figures show.

Lockdowns have also led to the rise another insidious activity: bullying and cyberbullying.

Even before the lockdown, the United Nations Children's Fund (Unicef) ranked bullying among the top concerns of children. The issue is widespread throughout the world, affecting a significant percentage of children as victims, perpetrators or bystanders.

In a 2019 Unesco report, Behind the Numbers: Ending School Violence and Bullying, bullying is highlighted a major problem worldwide, with 32% of students aged 11 to 15 bullied by their peers at school at least once in the last month.

In a poll conducted by Unicef in 2019, more than a third of young people in 30 countries report being a victim of online bullying.

Cyberbullying, which involves the posting or sending of messages, pictures or videos, aimed at harassing, threatening or targeting another person. Although the prevalence of cyberbullying is low compared with other forms of school violence and bullying, it is an increasing problem and is on the rise during the pandemic.

"During the Covid-19 pandemic, and the related school closures, we have seen a rise in violence and hate online - and this includes bullying. Now, as schools begin to reopen, children are expressing their fears about going back to school," said Unesco director-general Audrey Azoulay.

There is also a need to empower victims by providing information and support to children to enable them to speak up and seek help.

Sport is another area where child abuse has long been prevalent, but where victims have been afraid to speak out until recently. Young people, especially those who aspire to become high-performance athletes, spend as much of their time around coaches as they do with their families and are often targets of exploitation or worse.

A Human Rights Watch (HRW) report published this month, which documented the experiences of more than 800 athletes in 50 sports, found that in Japan, child athletes often suffer physical and verbal abuse and sometimes sexual abuse during training.

The report titled "I Was Hit So Many Times I Can't Count": Abuse of Child Athletes in Japan, exposed a toxic culture in Japanese sport, which involves the use of physical violence as a coaching technique. Such practices are seen as essential to achieving excellence in competition and in personal character.

Many child athletes had been punched, kicked or experienced verbal abuse, while others reported being ordered to eat excessively, denied water or told to train even when injured.

The "tradition" makes eradicating physical abuse in sport hard because coaches, parents and some players believe that there's value in physical abuse.

Abusive coaching techniques documented in the report include, but are not limited to, hitting children with bats or bamboo kendo sticks, slapping children, and simulated drowning.

In 2013, the Japanese Olympic Committee (JOC), promised to take steps to eradicate violence among its sports federations after an internal survey revealed more than 10% of its athletes had been victims of bullying or harassment.

However, the watchdog said that not enough had been done since then and demanded organisations such as the Japan Sports Council and the JOC use the upcoming Olympics as a catalyst for change.

The watchdog's national director, Kanae Doi, said that even though child abuse in sports today is a global problem, the organisation chose to focus on Japan for 2020 because the Olympics and Paralympics will be held in Japan.

But Japan is not unique in this domain. In South Korea, the story of Choi Suk-hyeon, a promising triathlete who committed suicide in June, also exposed the culture of malpractice in the country.

The story broke when Choi's family released a diary and secret recordings in which the young triathlete documented years of physical and psychological abuse that she said she suffered at the hands of her team's coach, doctor and two senior teammates.

The diaries and recordings have set off a firestorm of criticism about the corruption and abuse that critics say has long pervaded the South Korean sports community.

South Korea has slowly emerged as a global sports powerhouse, with its athletes winning Olympic gold medals and other prizes. But recurring scandals have revealed widespread physical violence, sexual assault and other forms of abuse against athletes, many of whom are young, vulnerable and live away from their families during training.