Thai travellers expected to stick to domestic trips into next year, according to international survey

Local tourists made domestic trips from Don Mueang airport during the first long weekend in July. (Photo by Arnun Chonmahatrakool)

More than eight in 10 Thais want to travel this year and 75% prefer to travel domestically, according to a new international survey.

And while people in most countries look forward to international tourism in 2021, 71% of Thai travellers expressed a preference for further local travel next year, said the survey by Europ Assistance, an international provider of travel assistance and related products.

Despite having travel plans for this year, only 36% of Thais have already booked their trip. Safety is a key concern, as 86% intend to avoid visiting crowded places and 84% said they would avoid travelling to certain countries.

Another noteworthy trend is that 70% of Thais now plan to buy travel insurance in the future, while only 44% of people did this in the past.

The findings are contained in the Future of Travel survey commissioned by Europ Assistance and conducted by Ipsos, which drew on responses from 11,000 travellers in 11 countries between June 5 and 26. Over 1,000 Thais took part.

While Covid-19 has had a major impact on travel across the world, the overwhelming majority (81%) of those surveyed globally indicated they would be interested in taking a trip in 2020. However, only 35% said they had already booked for July and August or were planning to do so.

This is likely to be only a short-term trend as most of those surveyed also indicated they would be more confident in booking a trip later in 2020 and in early 2021. 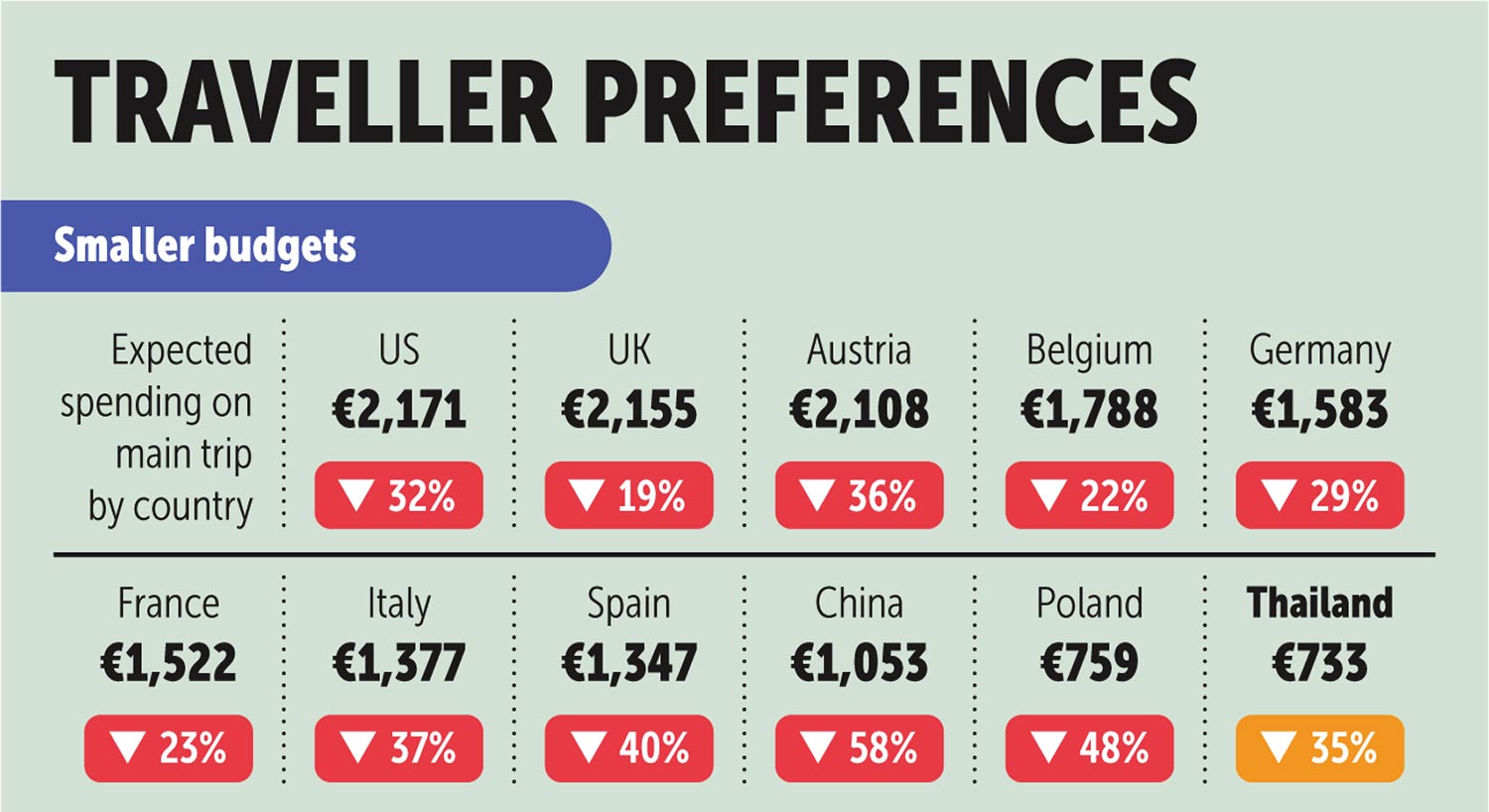 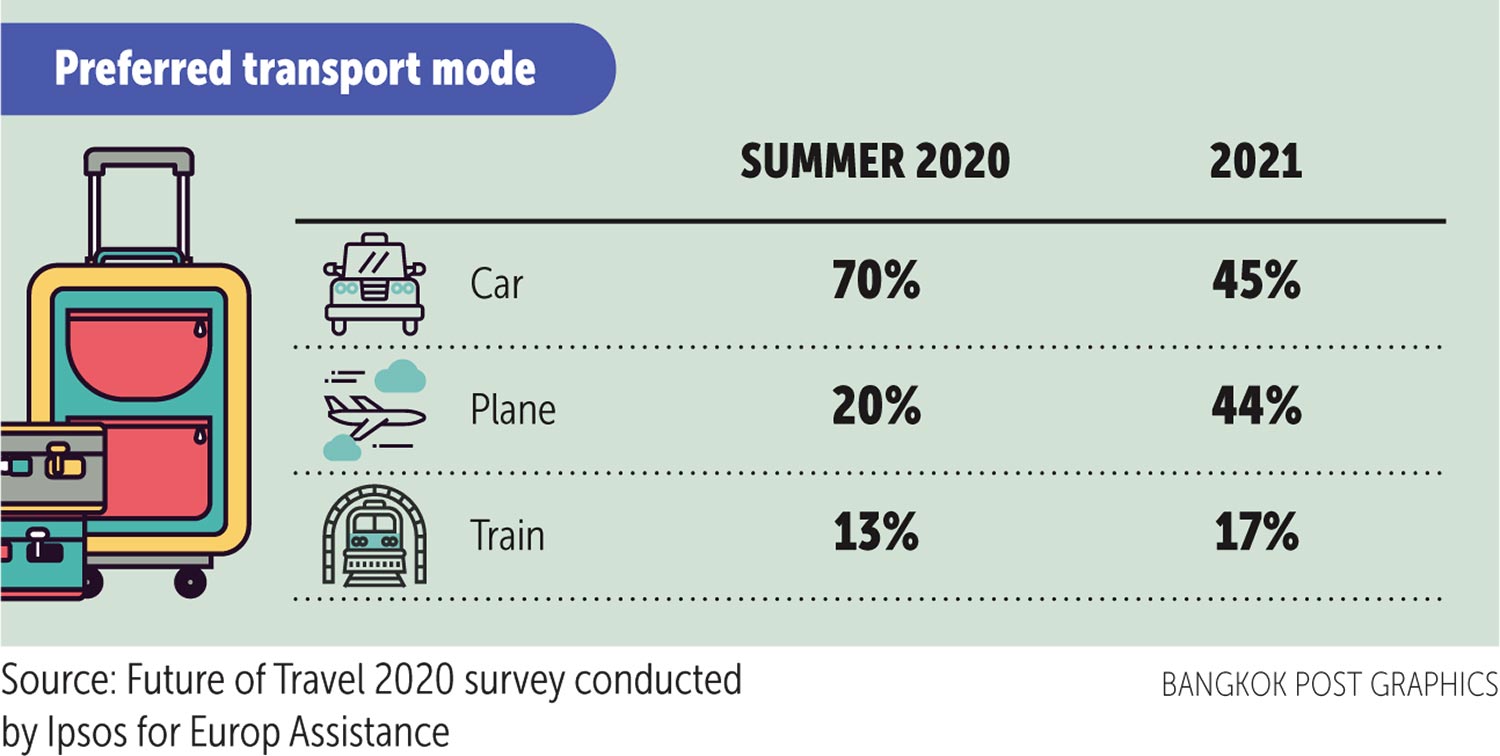 As well, many of the travellers, particularly those in Europe, indicated they would return to their pre-Covid preferences such as flying and staying in large hotels by early next year. Among the key findings:

- The average budget among global respondents was €1,506 (Thailand €733), with 36% indicating they'll be taking a relaxing week-long vacation at a beach destination (30% of Thai respondents) for their post-lockdown trip.

- 74% of global respondents indicated they'll be travelling by car (either rented or personal) to their summer destination, with Thai travellers just below this at 71%.

- 61% of global respondents are choosing to stay in private rentals or small hotels, most likely in an attempt to maintain social distancing and avoid large crowds. Only 27% of Thais preferred the same accommodation, while 71% intended to stay in a hotel.

Covid concerns: Unsurprisingly, Covid-19 is the main fear for all travellers surveyed but we asked respondents their thoughts on what risk mitigation measures they plan to take and what Covid concerns need to be addressed before they begin travelling.

- Travellers indicated that an epidemic occurring when travelling (36%), not being able to engage in their usual trip activities and sightseeing due to Covid (28%) and being quarantined abroad (27%) are the three key concerns. In Thailand, 51% were concerned with an epidemic outbreak when travelling.

- A drop in infection rates (54%), an official government advisory (25%) and the reopening of hotels, bars and restaurants (25%) were the three leading factors that would reassure travellers.

- The top risk mitigation behaviours travellers would engage in this year are avoiding certain countries (79%), avoiding crowded places (77%) and staying within their own country (76%).

- 75% indicated they'd be taking a car (rented or their own) to their summer post-lockdown getaway. The number who indicated they would take a car to their trip in the fall (58%) decreased significantly and continued to decrease when travellers were asked what their preferred mode of transport would be in the winter (56%) and in 2021 (51%).

Destination comparisons: Most travellers globally indicated that they'll be travelling locally this summer, but are eager to travel internationally in 2021.

- 66% want to be covered for repatriation if their destination closes its borders or imposes a lockdown.

- 63% want to be covered for trip extension.

- 62% want to have support for the 14 days after they return if they become sick on their trip.

"While many preferences were in line with current sentiments on social distancing (smaller accommodations) and the avoidance of crowds (minimal use of public transport), we noticed that respondents indicated they would be comfortable going back to their pre-Covid travel preferences when asked about their travel plans for 2021," said Francine Abgrall, head of travel at Europ Assistance Group.