Planned IPO launches in the second half could provide rescue

Bull and bear mascots greet investors at the Stock Exchange of Thailand museum on Ratchadaphisek Road. Market capitalisation of the SET declined by 28% by the end of March. (Photo by Tawatchai Kemgumnerd)

After Thailand's stock exchange took an unprecedented beating in the first half this year, analysts and traders are looking to the third quarter to see if the country can rebound quickly or will continue to flounder from the pressure of low exports and lethargic tourism.

Chanchai Chaiprasit, chief executive at PwC Thailand, said Thailand's stock market in the first quarter took a beating from Covid-19 in line with the rest of the world. 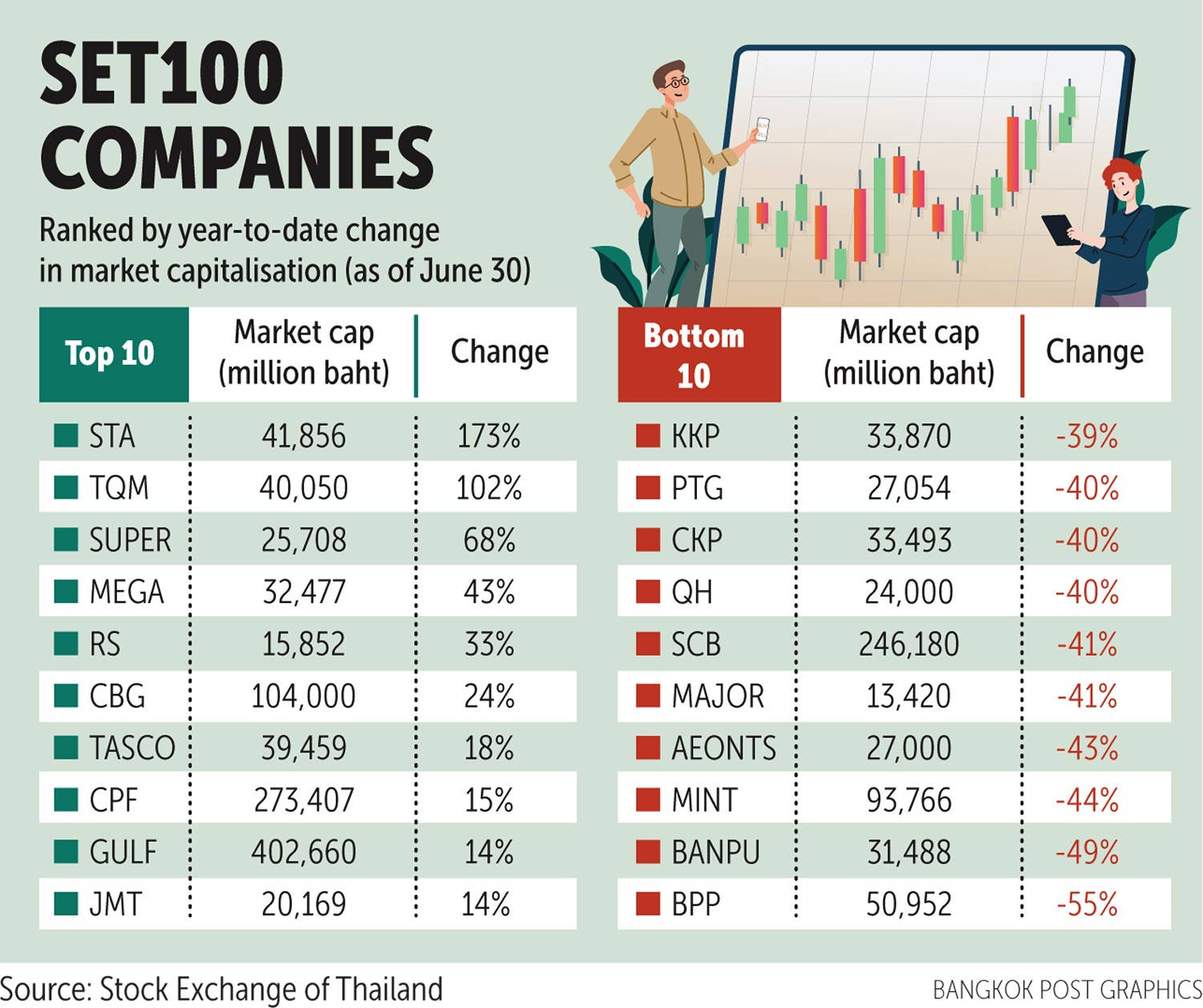 Global Top 100 market capitalisation fell 15% in the first quarter in contrast to an impressive growth of 20% from March to December of 2019, based largely from Saudi Aramco's largest IPO in history in December 2019, according to PwC's analysis of the Global Top 100 companies by market capitalisation for two periods of March-December 2019 and the first quarter of 2020.

European companies in the Global Top 100 saw the most significant reduction in this first quarter with market capitalisation shrinking by 25%, worth US$956 billion. British companies' market capitalisation dropped 28% over the same period, brought about primarily through uncertainty caused by Brexit and Britain losing its status as a financial gateway to Europe.

Only 10 companies in the Global Top 100 saw an increase in share price, including Netflix as the second biggest increase of 16% through to March 2020.

Tesla, which recently entered the Global Top 100, was a top 10 riser in both periods with its market capitalisation doubling to $96 billion.

The market capitalisation of Microsoft and Apple each exceeded US$1 trillion as of March while Amazon, which was valued at $971 billion at the end of the first quarter, exceeded the $1-trillion mark from a surge in demand for online shopping created by business closures during the lockdown in the US in response to the pandemic.

"Companies in the Global Top 100 outperformed their industry indices, an early indication that investors value the defensive qualities of larger companies and their scope to both survive the crisis and invest in the post Covid-19 world," said Ross Hunter, IPO centre leader at PwC.

The economic recovery in the second quarter did not quite reflect fundamentals of many companies as the gains were largely due to a concerted effort by governments and central banks worldwide to unleash fiscal and monetary stimulus such as pumping money into the economy, causing short-term capital inflows into the Thai market and other regions, said Mr Chanchai.

"Whether or not the market rally will continue depends on corporate earnings and the economic outlook," he said.

"Investors need to closely monitor all these factors going into the third quarter," he said. "Only then will we have a clear picture of how Covid-19 has impacted investment."

IPOs TO THE RESCUE

The domestic IPO market also dried up in the first half of 2020 with only two IPOs listed on the SET index. They were Central Retail Corporation Plc and Sri Trang Gloves (Thailand) Plc.

According to the SET data as of July 7, 10 companies were approved by the market regulator for IPO launches and seven companies are in the process of IPO filing to trade on the SET's main board.

As of July 20, five companies were approved for IPO launches and seven companies are in filing their IPO launch process on the Market for Alternative Investment index.

The list excludes Silicon Craft Technology Plc, which launched its IPO on July 21-23 July and scheduled its first day trade on July 30.

The company plans to offer IPO shares of no more than 1.19 billion shares or 27.7% of total issued shares after the IPO. This excludes an over-allotment portion of not more than 179 million shares.

Nuttachart Mekmasin, executive director of Trinity Securities, said packaging is the highest performing business line of SCC and funds raised from an IPO are crucial to allowing the firm to further expand its business.