While results have largely been a mixed bag, there remains plenty of room for improvement

Gen Prayut (front row, third left) with representatives of the private sector after a meeting on economic recovery from the pandemic. (Government House photo)

It's been a little over a year since the Prayut 2.0 government took over. For those who voted for the Palang Pracharath Party in the hope that stability would ensue, that appears to have been wishful thinking, as the coronavirus pandemic and sporadic domestic political protests have shown.

Prime Minister Prayut Chan-o-cha and his cabinet members were sworn in on July 16, 2019, and cabinet ministers officially began working on July 18.

The key political consequence of the ceremony was that the National Council for Peace and Order, which governed the country for five years, ceased to exist once the cabinet was sworn in.

The time is ripe for a one-year report card on the incumbent government, specifically on how efficiency and forward-looking ministers in charge of important economic policies have plied their trade in helping Thailand's economy to develop against a torrent of headwinds.

The travails of the tourism industry, the hardest-hit sector during the pandemic, have made the task for tourism officials something of a mission impossible.

Phiphat Ratchakitprakarn, the tourism and sports minister, said he rates himself a 4 out of 10, or a fail in other words, because the industry still hasn't improved.

He said the tourism industry has been unable to help revive the Thai economy, unlike the shining star it used to be in the past.

He described unfinished business in terms of building a stronger foundation for the Tourism and Sports Ministry as a major economic body that helps all stakeholders, from upstream to downstream, and making work more efficient for every related organisation. 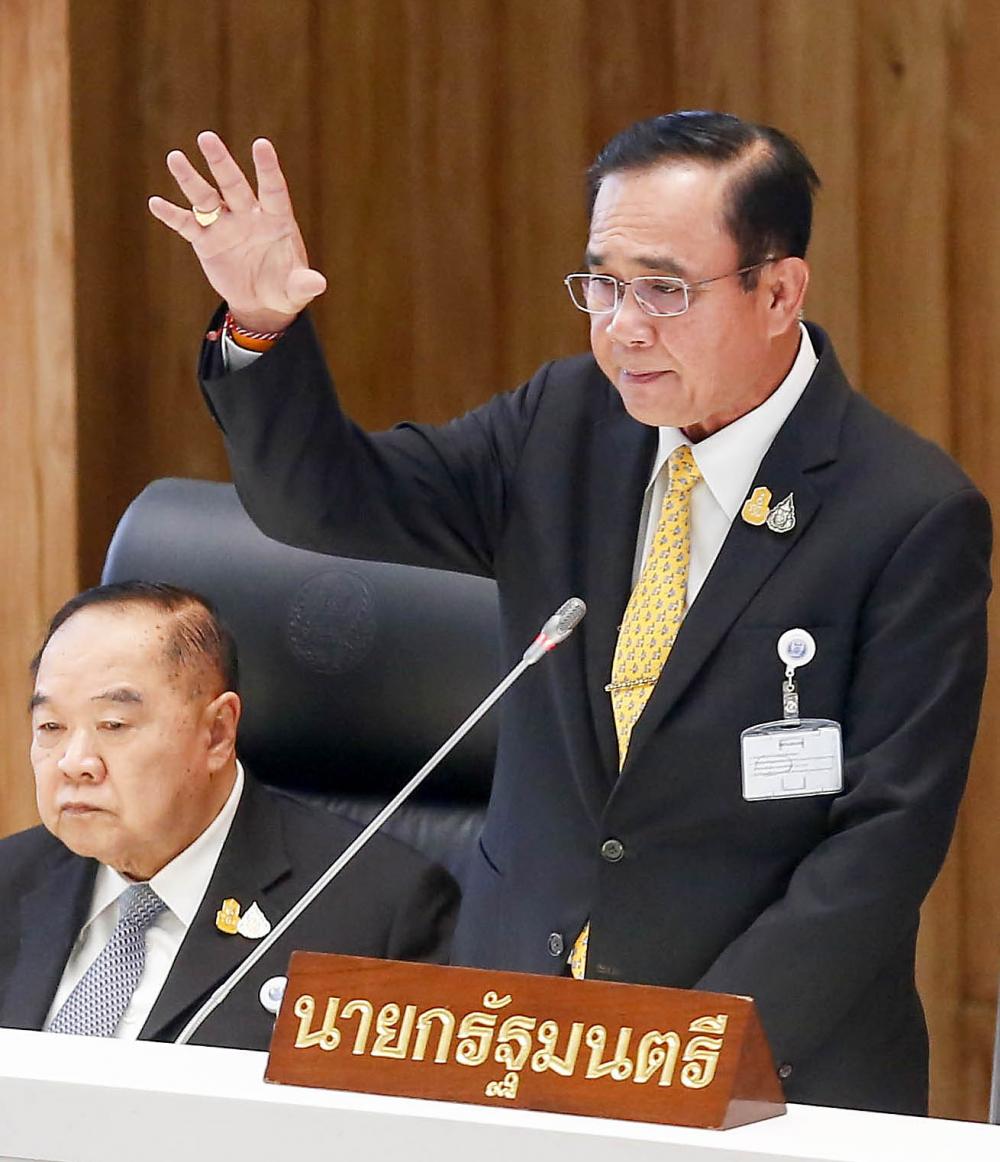 Gen Prayut and Deputy Prime Minister Prawit Wongsuwon at a budget debate in the House of Representatives. Pattarapong Chatpattarasill

Chairat Trirattanajarasporn, president of the Tourism Council of Thailand, said the government always comes up with flashy ideas to boost tourism, but most of the measures are not effective in practical terms.

This means that the ministry sometimes fails to stimulate the industry.

Since the outbreak devastated the tourism industry, operators have been waiting for soft loans from a government scheme to maintain their business. But the majority of operators are small and medium-sized enterprises (SMEs) that lack access to this financial aid because of difficult conditions required for the funding, Mr Chairat said.

Some SME tourism operators exited the market because of a lack of cash flow, while the latest tourism stimulus campaigns, including We Travel Together and Moral Support, benefit only certain groups of operators in the supply chain, he said.

"Given the failure to provide practical measures for tourism operators directly affected by the economic slowdown and the virus, I would give the government only 3 points out of 10," Mr Chairat said.

Sompop Manarungsan, president of the Panyapiwat Institute of Management, awards a score of 6 or 7 out of 10, citing government relief measures designed to help offset the impact of rising unemployment, shrinking exports and dwindling tourism caused by the deadly virus outbreak on the overall economy.

The government has been outstanding in effective healthcare management and the efficiency of healthcare-related agencies and organisations in tackling the Covid-19 contagion, he said.

But in light of a second wave in many countries, the government needs to rebuild the country's strength and set a new direction for its future, Mr Sompop said.

"The government's two-year national strategy may need revision because the situation has completely changed after the virus outbreak," he said. "The administration seems content to slowly push along infrastructure development projects and connectivity with neighbouring countries."

For the performance of the commerce minister, Mr Sompop gave a score of 6 out of 10, saying the ministry's trade promotion policy still largely focuses on quantitative exports, with limited qualitative improvement.

"Overall Thai exports have yet to factor in value addition and productivity," he said. "Most Thai exporters are still original equipment manufacturers and have yet to build their own brands, nor have they created enough market diversification." 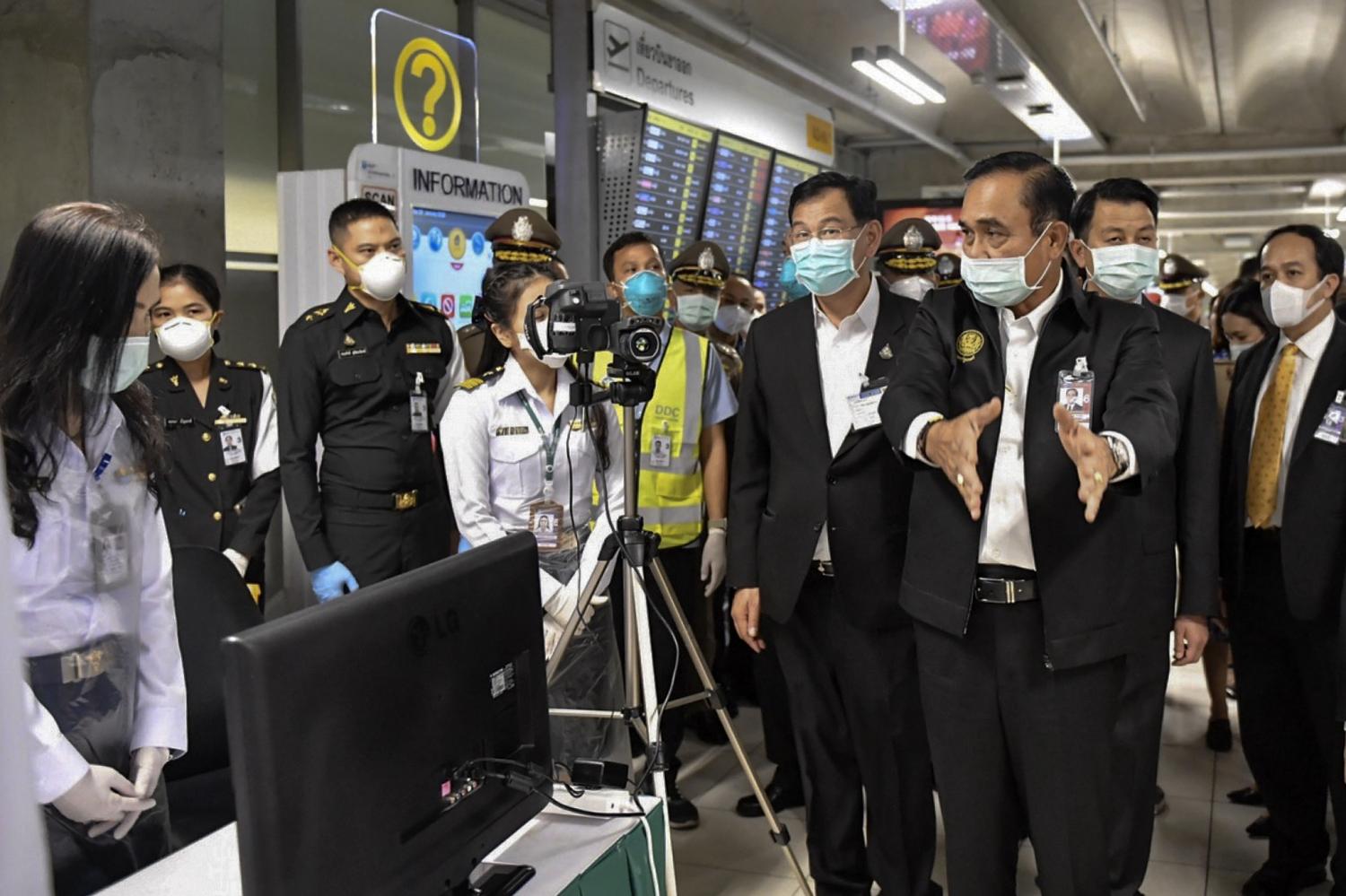 Gen Prayut visits Suvarnabhumi airport to address the coronavirus outbreak. Effective healthcare management in tackling the contagion was listed as the government's strongest performance in the last year. Photo courtesy of Government House

The Federation of Thai Industries (FTI) is satisfied with the work of Industry Minister Suriya Juangroongruangkit for his knowledge of entrepreneurship and quick actions to help SMEs cope with the pandemic.

"Mr Suriya is an expert in industry. He has a good understanding of what businesses want," FTI vice-chairman Kriangkrai Tiannukul said, referring to the background of the minister, a businessman turned politician.

Because of his experience in handling issues involving all sizes of companies, "he was quick to take action in the face of the pandemic", Mr Kriangkrai said.

According to media reports, Mr Suriya earlier urged the SME Development Bank of Thailand to speed up disbursement of soft loans worth 40 billion baht to help staggering SMEs.

The Prayut 2.0 government finished its first year with a satisfactory grade in the opinion of the FTI, with most of its success in containing Covid-19 and launching economic stimulus packages to relieve the impact of lockdown measures.

Close aides to Mr Suriya who requested anonymity said the minister has pushed ahead with key development projects, including the ambitious Eastern Economic Corridor scheme to build a high-tech industry hub.

More than 11,000 SMEs and up to 200,000 sugar-cane farmers have been given financial aid to run their businesses, the aides said.

Mr Suriya also encouraged farmers not to harvest sugar cane by burning 1.2 million rai while clearing land as an attempt to deal with harmful levels of PM2.5 dust particles, they said.

Nonarit Bisonyabut, senior fellow at the Thailand Development Research Institute, said the economic policy used by the administration to cope with the effects of Covid-19 is on the right path but needs to be more efficient in terms of outlays to stimulate a recovery.

Next year the economy may face more problems than this year, and the government may need to prepare a budget to address the problems, with the possibility of borrowing an additional 500 billion to 1 trillion baht, Mr Nonarit said.

Although the 1-trillion-baht loan decree is a valid measure to address faltering economic conditions, the government is spending the budget too slowly or disbursement has been too limited, as only 300 billion has been allocated, he said.

The government must increase the efficiency of budget spending to stimulate the economy, such as putting money into Village Funds to stimulate job creation in communities after unemployment spiked during the crisis, Mr Nonarit said.

For 2021, the government should devise a plan to rev up the sapped tourism industry in the event that foreign tourist arrivals decline from 30-40 million, the level of the last few years, he said.

The government also needs to find a way to prepare a budget to deal with slow budget disbursement by government agencies and slash unnecessary spending, such as overseas site visits, Mr Nonarit said.

By cutting 10% of spending for all government departments, this will leave the administration with roughly 300 billion baht that can be used to address next year's problems.