Allowing dollar-denominated transactions may cause more questions than answers

Several gold shops across the capital have seen an influx of gold traders as prices increased. (Photo by Pornprom Satrabhaya)

After years of regulations confining gold trade in Thailand to the baht, the US dollar will now be used.

Two weeks ago the Bank of Thailand announced a policy to allow trading gold products in US dollars.

Market participants say the central bank will consider dollar-denominated trade for foreign-related capital market products in the near future.

"The investment world has changed. Domestic investment alone is not suitable and diversifying overseas is better. Thais should be gradually educated about foreign exchange risk," said a source familiar with capital markets.

The Thailand Futures Exchange (TFEX) and the Stock Exchange of Thailand (SET) have long requested permission for an exemption from the Bank of Thailand to trade foreign-related products such as gold online futures, oil futures and foreign equity products in US dollars, but were denied because the Currency Act of 1958 mandates trading goods and services here must be conducted in baht. 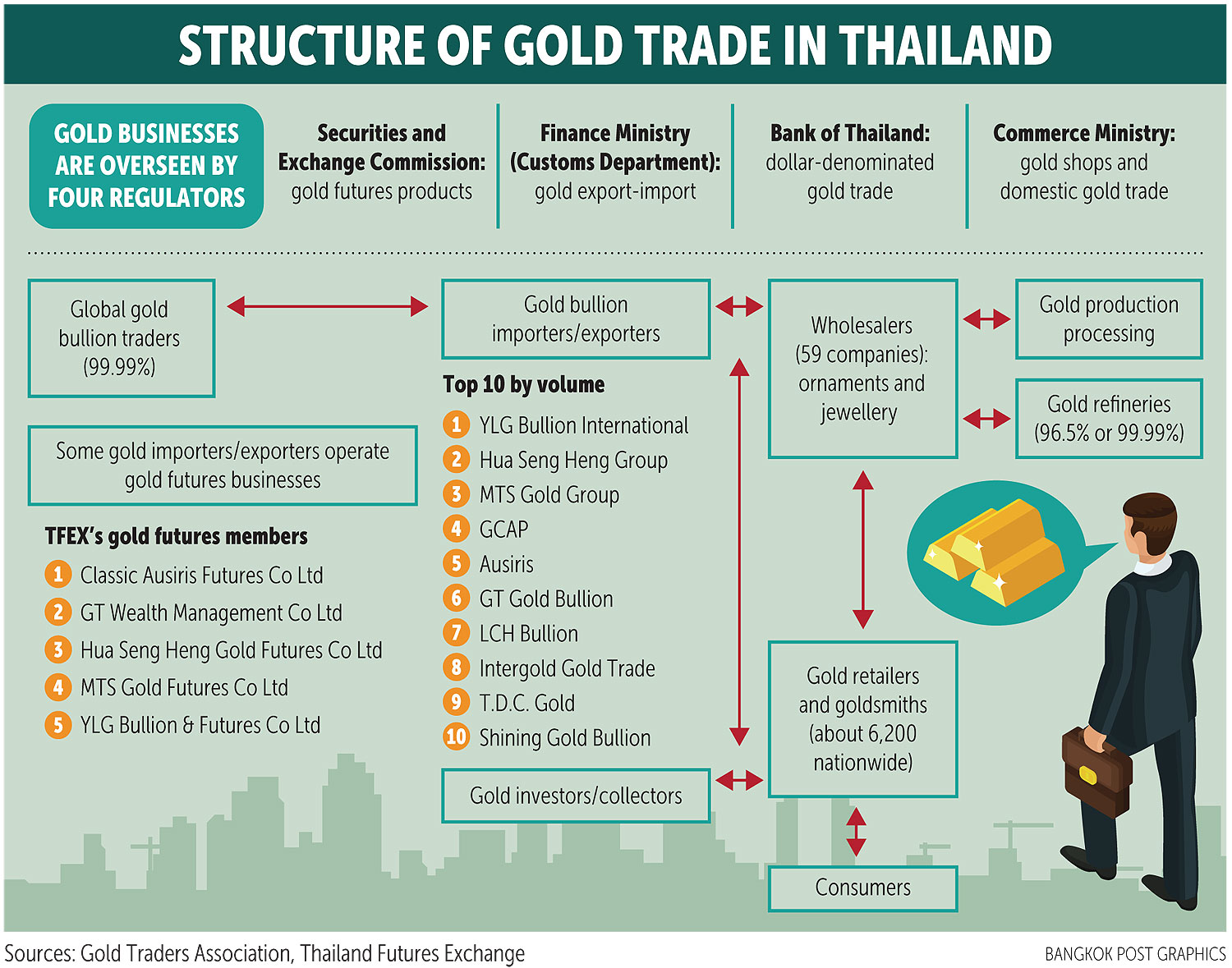 A former regulator at the central bank who requested anonymity said gold trading is speculative and does not create economic value.

Yet with the right implementation, trading gold or assets in foreign currency terms could be a good risk management tool, said the former regulator.

"I understand the central bank's purpose [in allowing trade of gold in dollars] because gold imports and exports could disrupt the trade balance and the exchange rate," the former regulator said. "It would be better if the impact of exchange rates is separated from gold import-exports."

The source said currencies and interest rates are quite complicated and traded among giant players. Trading gold in dollars will be more advantageous for those with high net worth, said the source.

Trading gold in the dollar may take a few years of adjustment, added the former regulator.

MTS Gold Futures's chief executive Nattapong Hirunyasiri said it could take a few tries until the market adjusts as the structure of the gold business in Thailand has many moving parts: customers, gold retailers, gold export-importers, and commercial banks, which offer currency exchange and FCD.

"The current infrastructure is not ready yet," he said. "How can people trade gold in dollars if they lack a dollar currency account?"

Few Thais own FCD accounts and if they are not exporter-importers and want to have US dollars, they have to go to bank branches to exchange baht for dollars and bring ID cards or documents related to travelling overseas.

Domestic gold buyers are classified into two types: gold collectors who are willing to buy gold and hold onto it (like retail investors buying corporate bonds for interest return to hold to maturity), and gold speculators who trade in the short term for profit.

"Most speculators deal in daily domestic bullion trade, where someone trades gold in the global marketplace in dollar terms. Those unfamiliar with exchange rate risk trade derivatives of gold online futures on TFEX," Mr Nattapong said. 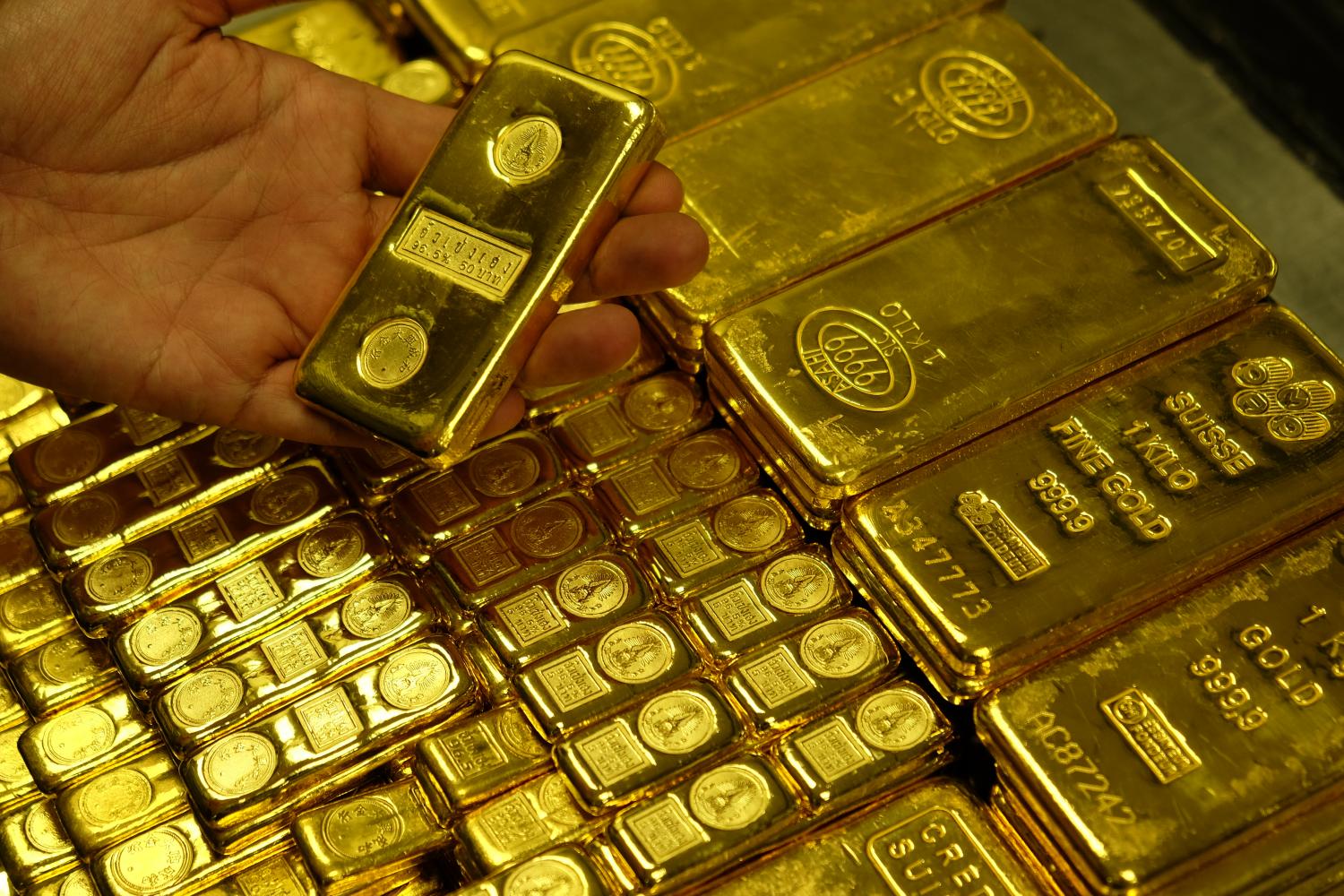 Gold bars on display at a Hua Seng Heng shop.

Gold collectors prefer to buy physical gold to collect as individual reserves for a long time (sometimes decades or even generations), he said.

When the economy tanks or the price hits a high point, they will sell their gold reserves. Then businesses export excess gold, bringing money into the country.

"Thais accumulate gold in individual reserves for many decades," said Mr Nattapong. "This is a unique mechanical difference from the other countries. Most Thais love to accumulate physical gold in their personal reserve."

Other governments have their own investment company and will liquidate some of the portfolio to inject money into the economy during a downturn, he said.

In the first half this year, Thailand exported 140,000 kilogrammes of gold worth over 250 billion baht.

Last Monday at Hua Seng Heng gold shop, one customer sold gold they bought in 1952 after the price hit an all-time high of 29,000 baht.

"This shows many people trade and keep gold in baht since their father's or grandfather's generation," said Tanarat Pasawongse, chief executive at Hua Seng Heng Group.

He suggested delaying trading gold in dollars until many people sell their collected gold or the price falls to a level where they could buy it back in US dollars.

Even some speculators who trade in the short term want to get physical gold to feel secure, Mr Tanarat said.

"Trading gold bullion in Thailand cannot be used to offset the net trading value at the end of the day," he said.

If customers want to buy gold worth 1 million baht and sell it within a day for the spread, they are required to put up that amount in full initially because gold is defined as a good under the regulations of the Commerce Ministry.

As net settlements are not allowed, gold speculators must have a large amount of cash on hand to make these transactions. If speculators trade in US dollars instead of baht, there will be much more demand to buy and sell large amounts of gold on the market.

If people want to convert dollars to baht to spend in Thailand, then the exchange rate could be impacted, he said.

This is unlike capital market products, where daily net settlement is allowed and the value that investors use to make a profit is smaller.

"We do not have answers at this time, we will just wait and see what happens," Mr Tanarat said.