Torrential rain across Bangkok does not seem to have dampened intensifying political tensions, as August seethes with mounting anger and growing demands for political and institutional changes.

There are three core demands put forward by anti-government protesters, with students forming the bulk of the movement, led by the Free People group and the Student Union of Thailand.

Those demands are the end of intimidation of critics of the government, a start to the drafting of a new constitution and the dissolution of the House of Representatives.

Sporadic protests have occurred despite the extension of the emergency decree, with Sunday's political rally at the Democracy Monument in Bangkok appearing to be a huge show of public dissent against the Prayut Chan-o-cha government and Thailand's royal institution.

A recent flashback to the anti-government rally at Thammasat University's Rangsit campus on Aug 10 saw an occurrence that stirred unease and contempt among hard-line royalists and conservatives.

Students announced a set of 10 demands involving changes and reform of the royal institution, including Section 112 and royal prerogatives.

Student activist Parit "Penguin" Chiwarak was reportedly apprehended by a group of police officers on Aug 14. He earlier faced lese-majeste charges filed by a 59-year-old man from Loei province.

Anxieties are also arising that there could be a replay of the Oct 6, 1976 massacre at Thammasat University's campus in Tha Prachan, as a royalist movement headed by the Archeewa Chuay Chart (Vocational Students Helping the Nation) group and another group calling itself the Association of Students of Thailand have rallied to defend the monarchy.

Rising political tensions represent compounding challenges for the government, which still has the Covid-19 crisis and internal party division on its hands. 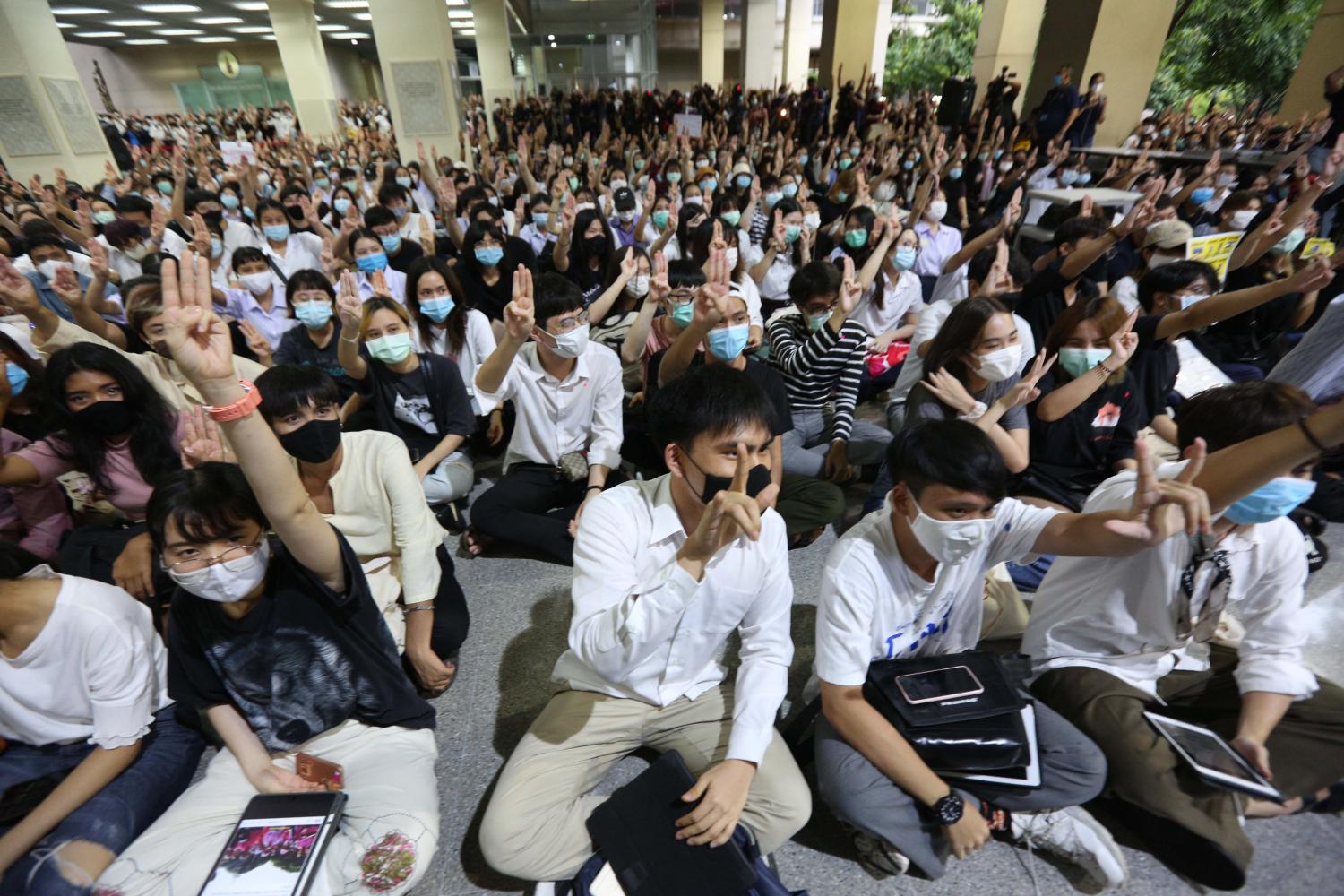 Business confidence can hardly avoid the impact of the highly contentious demonstration, with businessmen warning that escalation will deal a further blow to an economy that was ailing even before the Covid-19 pandemic.

Domestic political turmoil is a problem that has plagued Thailand for more than a decade, a period in which people have divided into pro- and anti-government groups.

This time it's university students leading the protest, calling on the government, which they view as prolonging the military regime that seized power in 2014, to dissolve the House.

"It's usual to see people holding different views in every country," Mr Supant said. "It's okay if the protesters follow the rule of law."

In the latest conflict, he said it's hard to predict whether the students' rallies will escalate into physical assaults and asset damage. But he warned that any political turbulence will make Thailand suffer further economic impact.

The nation has seen a number of demonstrations-turned-massacres.

On Oct 6, 1976, soldiers, police and members of far-right groups surrounded Thammasat University's Tha Prachan campus and killed scores of student activists who had gathered to oppose the return of Field Marshal Thanom Kittikachorn, who was overthrown and fled the country after the October 1973 uprising.

One of the reasons cited by the authorities to quell that rally was that the student activists had allegedly insulted the monarchy.

The infamous Black May that occurred in 1992 and a crackdown on Red Shirt protesters in 2010 were other crucial moments in Thai history, reminding people of the casual brutality of some in the military and leaving a bitter taste as hardly any perpetrators among the army were prosecuted.

In Mr Supant's view, this is a time when Thailand needs to pay attention to attempts to revive the reeling economy.

A new team of economic ministers is going to start its work, and the FTI wants the group to work to its fullest capacity to help the country get through the crisis.

Millions of small and medium-sized enterprises (SMEs) are waiting for state measures to relieve their liquidity problems and solve their difficulties accessing bank loans, Mr Supant said, adding that if SMEs cannot survive, larger industries will also be affected.

Besides the street demonstrations, an internal conflict within the government camp is also a concern, as it too could lead to new political risk.

Some political fractions are reportedly dissatisfied with the appointment of the new economic ministers.

Six new cabinet ministers took the oath of office before His Majesty the King on Aug 12, completing the process of their appointment.

Supattanapong Punmeechaow, who doubles as energy minister and deputy prime minister, and Finance Minister Predee Daochai have a daunting task ahead of them to rejuvenate an economy ravaged by the Covid-19 crisis and internal structural problems such as low competitiveness, high household debt and greying demography. 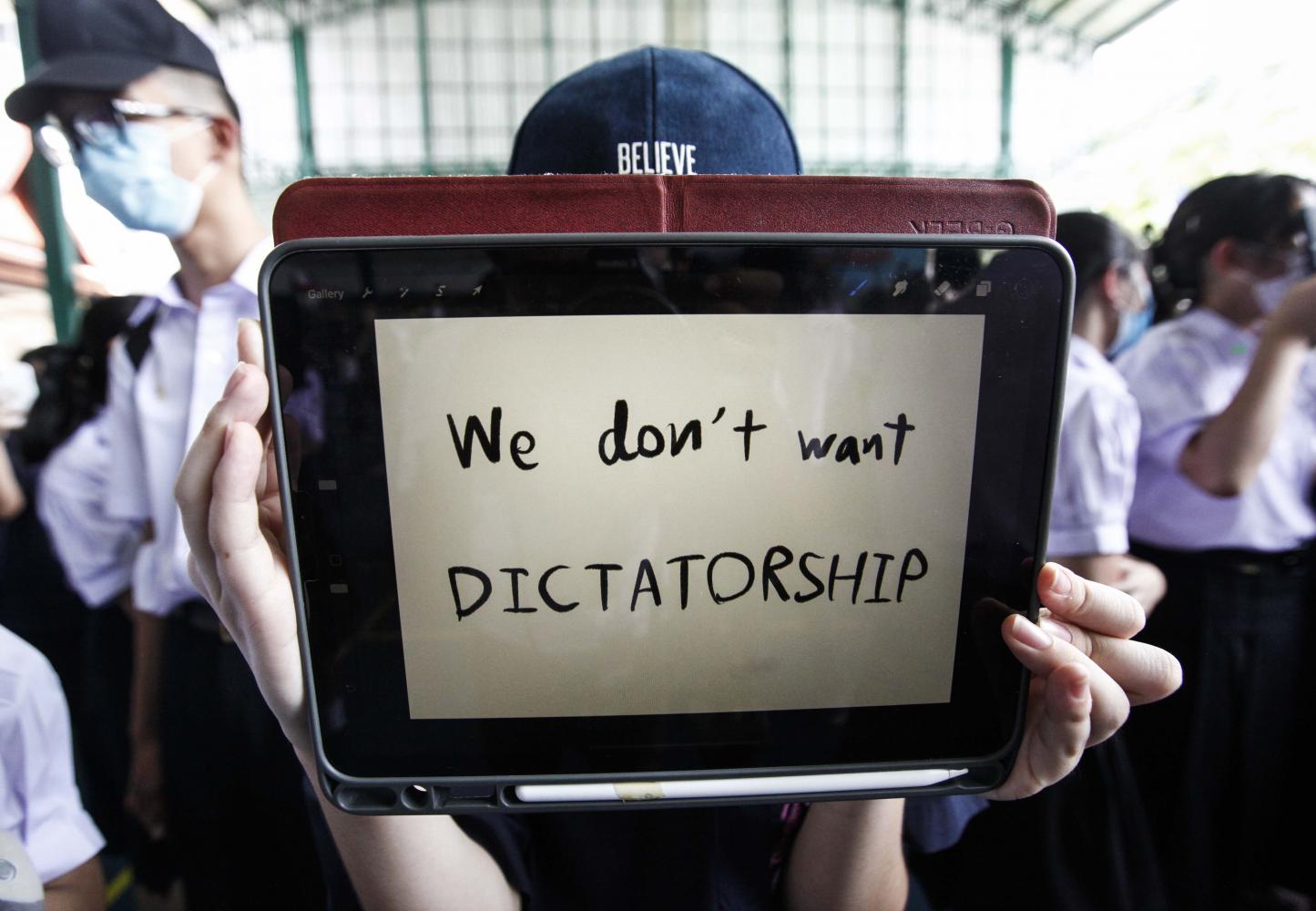 "More compromise from Gen Prayut towards the support of constitutional amendment is a hopeful reaction to solve political disputes, in which the conclusion will help the country move forward," said Chairat Trirattanajarasporn, president of the Tourism Council of Thailand.

He said that though domestic tourism has been recovering gradually, following the government's relaxation of lockdown measures, operators in the tourism industry have already suffered enough from the economic fallout.

Tourism operators have also braced for a prolonged crisis caused by the global pandemic.

The situation could get worse with the rising political temperature, as it may affect travel sentiment and slow down the process to put the local economy back on track.

Mr Chairat said local travellers may abandon their travel plans in order to save money for an emergency situation if the country undergoes another period of domestic political unrest during this tough economic time. Therefore a careful reaction from the government is necessary.

While protesters have recently held demonstrations, or flash mobs, in various areas nationwide, the protests have largely been peaceful.

Tourism sentiment and tourism operators are still unfazed by the rallies, as long as they do not take place in the core tourism destinations, so that people can continue their trips.

The most important thing is that people should not be panicked by the current situation.

"Normally tourists were not affected or hurt by political activities in past years," said Vichit Prakobgosol, president of the Association of Thai Travel Agents. "It does not pose any problems, especially when international tourists still cannot visit the country."

The ban on international commercial flights will remain in force while the Covid-19 pandemic situation is still critical in many countries, according to the Civil Aviation Authority of Thailand.

There were no foreign tourist arrivals for a third straight month in June, as borders remained closed amid the pandemic, with a consequent 66% year-on-year drop in the January-June period to 6.69 million visitors, according to Tourism and Sports Ministry data.

Despite the protests remaining peaceful, ongoing anti-government demonstrations have increased political noise and a confrontation is deeply feared.

Nipon Puapongsakorn, a distinguished fellow at the Thailand Development Research Institute, said the continuous anti-government rallies are prone to developing into risky political activities and eventually seeing a repeat of the vicious cycle of military intervention.

According to Mr Nipon, Thailand has never had a conflict management plan in place, leading political conflicts in the past to turn violent.

"We should develop a political compromise system under which there will always be a winner or loser, and two parties respect each other while cooperating to make the overall country better," Mr Nipon said.

The anti-government side is demanding the government stop threatening people who come out to exercise their democratic rights and freedom.

The group has criticised injustice and disparities in society and urged a rewrite of the constitution and House dissolution.

The other side, meanwhile, accuses the opposition of having a hidden agenda that targets the high institution, and warns anti-government protesters to stick to their claimed goal of finding a way out of the country's political crisis.