Thailand's economic fundamentals and fiscal position remain strong in the face of the pandemic-induced recession and the "worst is behind us", new Finance Minister Predee Daochai said on Wednesday.

Southeast Asia's second-largest economy shrank 12.2% in the second quarter from a year earlier, the sharpest drop since the 1998 Asian financial crisis.

Despite the unfavourable climate, Thailand's economic fundamentals remain solid on both the internal and external fronts, making Thailand one of the most resilient economies in the region, Mr Predee told the Thailand Focus 2020 forum organised by the Stock Exchange of Thailand.

"We believe that the worst is behind us. The economy is projected to bottom out in the second half of this year and will pick up in 2021 with 4%-5%" growth," he said.

The Finance Ministry has forecast a record economic contraction of 8.5% this year. (contnues below) 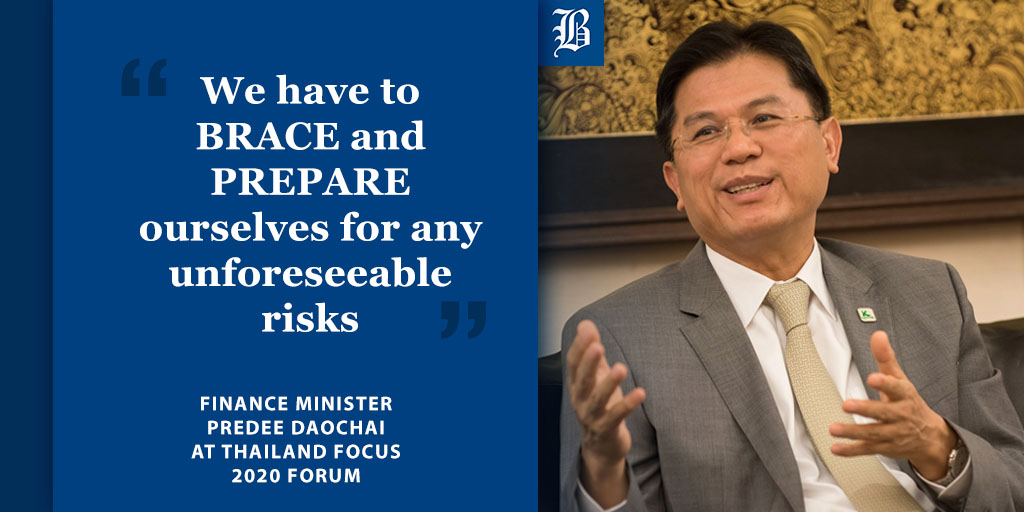 The government would implement necessary economic and healthcare policies to sustain the level of economic growth and activity, Mr Predee said.

"We have to brace ourselves, and be ready for any unforeseeable risks."

The government would continue to support vulnerable groups and promote job creation, as well as focusing on large-scale investment projects for long-term competitiveness, he said.

In response to the pandemic-induced recession, the government had launched relief and stimulus measures costing about 2.2 trillion baht, or 12% of gross domestic product (GDP), to help households and businesses affected by the outbreak, Mr Predee said.

With budget limitations, the government may seek further loans if necessary, he said. "It is of importance to pursue economic measures without sacrificing our fiscal integrity".

The National Communicable Disease Committee proposes shorter restaurant hours and school and amusement park closures until the end of this month to contain Covid-19.