Mr Chairat says the company is gearing up for a smart device roll-out this year to cater to new lifestyles.

After gaining ground in Thailand's smartphone market this year, Chinese smartphone maker Realme is gearing up for a roll-out of smart accessories and devices to catch the wave of 5G network expansion and modern lifestyles, with a plan to usher in 50 items this year.

Realme ranked fourth in the Thai market in terms of shipments in the first quarter, up 116% year-on-year, said the Counterpoint Research Market Monitor Service. The brand was among the top five in the Philippines, Cambodia, Vietnam, Indonesia and Myanmar.

Realme, a spin-off from Chinese smartphone maker Oppo, was founded in May 2018 by Sky Li, a former vice-president of Oppo.

The Shenzhen-based smartphone maker entered Thailand and some other Asean countries in Q4 2018, starting with budget phones. Realme has since gained strong traction in the region with a variety of segmented handsets.

Chairat Saorayasopit, vice-president for key accounts at Realme Thailand, said more than 1 million Realme handsets have been sold in the Thai market over the past one year and one month since the brand expanded market channels in the country.

"We have a good start with leapfrogging growth," Mr Chairat said. "We are now No.4 in the country with a monthly 15% market share this year."

Realme aims to be No.3 by year-end, he said. 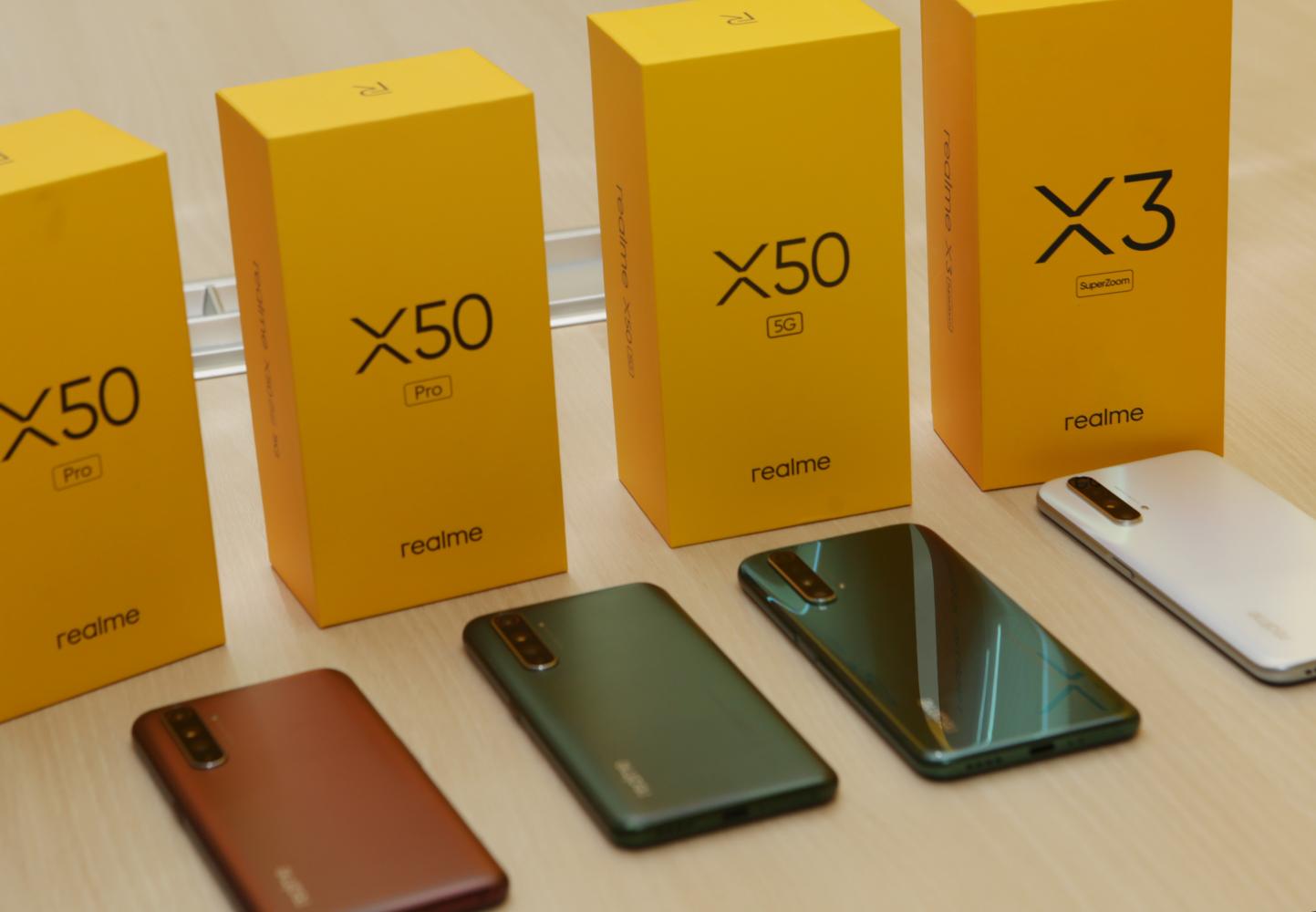 Realme X50 and Realme X50 Pro come with 5G feature, capturing the expansion of 5G network in the country. (Photo by Apichit Jinakul)

Referring to Realme's strategy to penetrate the Thai market, Mr Chairat said Realme focuses on expanding sales channels as quickly as possible to reach out to customers.

"This is the key," he said. "Regardless of how good our products are, if they are unable to reach customers, it would be difficult for customers to experience our products."

Realme has reached out to mobile operators, IT retailers, dealers and local shops to expand market reach. Realme now has about 8,000 sales spots nationwide.

"More potential places are still out there and we need to go," Mr Chairat said.

Realme staff reach out to local smartphone shops in provinces to present products and assist them in selling the products, he said.

"We have world-class quality of products with affordable prices for customers," Mr Chairat said. "Additionally, our target group is the new generation and what that means is design. Designs must be beautiful so that the owners will not be shy when carrying them."

According to Mr Chairat, Realme has about 3,000 staff on the ground to engage with customers.

"We place a huge importance on the sales team," he said. "Our sales team must be able to provide information, answer customers' questions and address their problems." 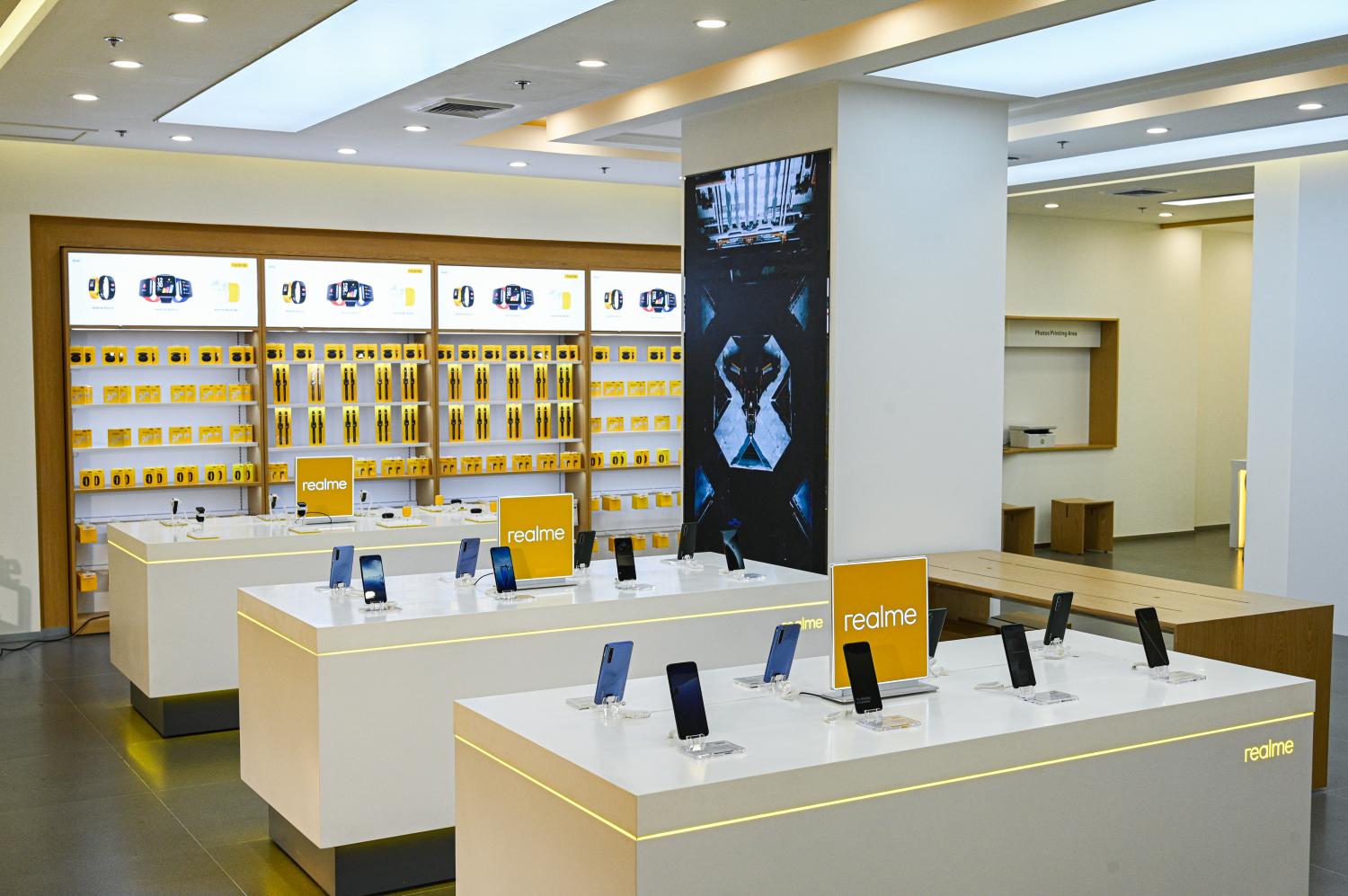 Realme aims to have 100 brand shops in Thailand this year.

AIOT ON THE MOVE

Realme is expanding into AIoT (artificial intelligence and Internet of Things), in line with a "1+4+N" strategy, which refers to one core product (smartphones), plus four major groups of lifestyle devices (speakers, earphones, TVs, watches) and N types of smart accessories.

Realme's AIoT products will have a wide variety of accessories with good design, Mr Chairat said, adding that the new generation regards these products as fashionable items.

"By this year, we will try to unveil 50 AIoT items, and we must have another 100 AIoT items next year," he said.

Apart from the core four of speakers, earphones, TVs and watches, other items include those associated with smart homes and lifestyle concepts, such as smart-home-based electric appliances and weighing scales.

"In the future, the world will be in the 5G era and these technologies will make life easier for people," Mr Chairat said.

5G will also be a boon for the smartphone segment. The new standard will provide key infrastructure for the country, and smartphones are among the chief gateways for leveraging the ultra-fast mobile broadband network.

"In one or two years, products that are compatible with 5G will be in higher demand," Mr Chairat said, and the smartphone segment will also be rejuvenated during the transfer of technology from 4G to 5G.

He said 5G will drive the country's development to the next level.

"If the government attaches importance to the 5G network for the country's development, this will facilitate smartphone vendors as well," Mr Chairat said.

During the pandemic-induced lockdown earlier this year, Realme was hit by the closure of mobile phone shops, Mr Chairat said.

Some 70-80% of Realme's offline sales channels are shops in department stores.

"We had to adjust by going online," he said. Shop staff at department stores had to explore customer targets outside of malls and through online channels.

Despite the closure of department stores, the demand for handsets surged, particularly from online study.

Responding to some complaints on social media about certain issues regarding Realme smartphones, such as touchscreen and software problems, Mr Chairat said Realme takes note of all concerns raised.

"We have sold a large number of handsets and some responses may have come out, and we heed them," he said. "Problems for hardware are rather small, while software will continue to be upgraded. Every voice we heard will be relayed to development teams. Things will be addressed fast."

At present, Realme has 40 brand shops and 20 in the process of being readied for launch.

"We plan to have 100 shops by this year," he said. Realme also has service centres in its three flagship stores at CentralPlaza Grand Rama 9, CentralWorld and The Mall Bang Kapi.

Mr Chairat said Realme is racing to open shops and give customers a first-hand experience of the brand's products.

Referring to the brand's phased strategy, Mr Chairat said that in the short run it's important for people to get to know the brand as quickly as possible.

In the medium term, Realme will gear up efforts to ensure confidence in the brand's products. And in the long run, Realme wants people to use its products as much as possible.

"We want our customers to be impressed by our products and come back to buy more," Mr Chairat said. "We also want to have word of mouth for our products."