Labour strikes against the algorithm
Business

Labour strikes against the algorithm

Grab drivers at the launch of the Free Your Hunger campaign, the latest effort by GrabFood to boost sales during the third quarter.

Not long ago the streets of Bangkok were near empty -- save for a bustling network of green-, pink- or yellow-vested delivery drivers shepherding food across a shuttered city to the millions trapped indoors fearing an accelerating viral outbreak.

As revenue from cornerstone industries like tourism, hospitality and retail dried up and government assistance lagged, newly unemployed workers were left with few options to earn a living through the crisis other than Grab, the Singapore-based ride hailing and food delivery tech firm, and similar platform apps that seemed to be hiring a limitless supply of new drivers to meet the surging demand for food deliveries.

While these jobs offer flexible work hours, they lack labour protections guaranteed by formal employment, and the role of the boss is replaced by an algorithm, both opaque and vexing to many drivers.

Driver dissatisfaction has been boiling for years as pay steadily declined, culminating in an organised protest last month at Grab's headquarters on Phetchaburi Tat Mai Road in Bangkok, demanding the tech giant concede to a list of demands or face continued labour action.

Before the gathering in Bangkok, there had been a number of smaller protests across Thailand in Nakhon Ratchasima, Khon Kaen and Pattaya organised on a grassroots level by Grab's drivers.

"The gathering we saw in Bangkok was definitely the largest so far," said Kriangsak Teerakowitkajorn, managing director of the Just Economy and Labor Institute, a Thai labour rights nonprofit. "The sharp decrease in pay and incentives, along with the other impacts caused by the coronavirus, caused a lot of people to come out."

At the time of the lockdown from March to May, Grab reported that food deliveries on its platform grew by three times. But since the country reopened, food orders have declined (though they're still much higher than pre-pandemic levels). Despite this, new drivers continue to flood the saturated platform, with Grab making no efforts to curtail the number of workers.

Grab says it has 100,000 drivers on its platform in Thailand.

"New players are joining the market as market growth has been accelerated by the pandemic … [and] people losing their jobs in other industries has created a surplus in the workforce that allowed food delivery companies to scale up their logistical needs with new drivers easily," said Clare Lee, a research analyst at Euromonitor.

The protest was sparked by new policies like Grab's attempt to make its official green containers mandatory for all food deliveries and long-standing grievances like the company's limited insurance protection and perceived unfair suspensions of drivers from the platform.

In response, Grab stopped requiring food delivery drivers to use bags and scrapped a zoning policy whereby drivers could only receive new jobs in a pre-designated area.

The company also said in a release that it had invited representatives for its drivers to talk with executives on Aug 7, but the request was denied by the group, which instead went ahead with the protest on Aug 10.

Despite being almost completely atomised as workers (a feature inherent to the platform economy), Grab drivers in Thailand have been organising for years through a number of Facebook and Line groups exclusive to drivers of the platform. One of largest of such groups on Facebook, "GRAB DRIVER BKK THAILAND", has over 40,000 members.

Falling short of a union or official labour organisation, these groups act as support networks for drivers to plan social events, raise donations for drivers injured or killed on the job, discuss grievances and eventually organise labour actions.

Workers for Grab's competitors in Thailand (Foodpanda, Get and Line Man) have similar organising groups (and most likely similar grievances). But their workers have not applied public pressure as widely and as effectively as the drivers at Grab -- a company widely thought to be the market leader in Thailand with a market share estimated to exceed 50%.

STUCK IN THE MIDDLE

In Thailand, workers are largely divided into two groups, formal and informal, with Grab drivers filling an awkward space in between.

Formal workers receive a regular wage from a registered company, making them eligible to receive social security healthcare benefits from the government and the right to form unions. Informal workers like street food vendors and day labourers lack these rights.

Despite wearing a uniform and working for a large multinational (many who depend on the platform as their sole form of income work hours far longer than full-time employees in other sectors), Grab drivers are not classified as formal labour -- instead Grab calls their drivers "partners". Their employment status is based on a constantly evolving terms-and-conditions agreement, by which the company reserves the right to suspend or terminate workers from the platform for violations.

"The company unilaterally changes these conditions all the time," Mr Kriangsak said. "Their labour classification is a really big issue -- if they were actually partners in the company, they would be able to sit down at a table and discuss these issues."

While Grab maintains sweeping control over who is allowed to use its platform, there have been no reported incidents of Grab banning drivers for labour organising.

The decimation of the unskilled labour market pushed many workers into the food delivery and ride hailing business, even if they did not previously own a motorbike or a smartphone.

Conveniently, Grab offers financing options to purchase these essentials and pay off the loans by directly deducting from drivers' earnings on the platform.

Drivers who finance their smartphone through Grab will actually have their phones locked if they miss 10 days of daily payments (a policy defined in the terms and conditions of the phone financing agreement), thus locking the worker out of the platform and the ability to earn money to pay off the debt.

Grab drivers also receive insurance from the company of up to 50,000 baht for injury and 200,000 baht in case of death, but Grab only pays claims if drivers are in the process of doing a job through the app at the time of the accident.

"On the Line and Facebook groups, you see stories every day about drivers that got hit outside a job and other members will transfer 50 or 100 baht to help the driver and their family," said Akkanut Wantanasombut, a researcher at the Institute of Asian Studies who works directly with Grab drivers to help them organise. "If the company knows you died on the job, they will send a wreath of flowers to your funeral."

Another chief concern raised by dissatisfied Grab workers regards its call centre, ostensibly the only connection between the drivers and the company. The drivers demand the centre be open 24 hours a day (currently it's open 8am to 11pm) so that they can deal with customer disputes and other issues at odd hours. The lack of conflict resolution can lead to displeased customers, cancelled orders and bad reviews -- all of which could lead to platform suspensions.

During the nationwide curfew earlier this year, the call centre had even shorter hours, around the same time Grab implemented an artificial intelligence (AI) system to detect if drivers were wearing a mask as part of its health and safety initiative to prevent the spread of the coronavirus.

According to Mr Akkanut, some drivers complained that the system made an error and suspended them from the platform despite their wearing masks.

Drivers were required to take a selfie wearing a mask before an order and the AI would verify it. The system was imperfect, and some drivers said they were suspended from the platform anyway. The system has backup human verification for these errors, but because of the limited hours of the call centre, some drivers felt they had been wrongfully suspended and forced to retake an online training course.

Ironically, the Grab protesters did not demand an increase in base pay and incentives, or a decrease in the fee each driver must pay to Grab as part of their official demands.

"Workers aren't demanding higher pay at all, and I suspect it's because of Grab's narrative that they are losing a lot of money, so the workers cannot demand higher pay or the company will go out of business and the workers will lose their jobs," Mr Kriangsak said. "I find that problematic because this is a different business model, where these platform companies are willing to lose money by subsidising customers in order to build their networks."

Unlike traditional companies that live and die on the colours of their balance sheets, massive unicorn tech startups like Grab accept heavy losses, burning through venture capital to rapidly grow their user base and market share by undercharging for services.

Grab is worth US$14.3 billion, according to CB Insights, and just last month raised an additional $200 million from South Korean private equity firm STIC Investments, bringing its fundraising total to $10 billion.

The company reduced incentive bonuses for drivers in 27 provinces in Thailand earlier this year, excluding Bangkok, Nonthaburi and Pathum Thani, saying it was a necessary measure to make up for profits lost from the pandemic.

Perplexingly, the company still has funds for what it is touting as its biggest marketing push yet in Thailand this month, offering discounts of 50% and free deliveries for up to three kilometres.

Part of what made Grab so appealing to workers initially was its incentives structure that offered financial bonuses for completing a certain amount of jobs under a certain time frame.

But a common sentiment has emerged, not just among Grab drivers but many platform workers globally, that the algorithm is cheating them out of achieving their incentives by stopping or slowing down new job assignments as they reach their incentive target.

"This is something we have seen across the world," said Uma Rani, senior economist at the International Labour Organization, an agency of the UN. "Supposedly the drivers are told that if they reach a target of 10 customers within a certain amount of hours or days they will receive a bonus of a particular amount, but what happens is they reach the eighth customer easily, the ninth one takes a lot of time and then they never reach the last."

She said that while some workers obviously get through to the incentives, their ability to do so could be manipulated by algorithms designed to maximise profits and efficiencies.

Grab denies any tampering with employee incentives through its algorithm, as that would limit the number of drivers available, slowing down orders and inhibiting the customer experience.

Due to the lack of transparency in the algorithm, theories like this one permeate among platform workers trying to make sense of the system dictating their employment terms.

This worker dissatisfaction can be disruptive for these companies.

According to Ms Rani, Grab drivers have organised 12 local strikes in Indonesia, while drivers working for Gojek, Grab's biggest regional competitor, organised 13 strikes in the country. In India alone there have been 115 strike actions taken against local players in the ride hailing and food delivery sectors.

"Our organisation has been doing analysis on these strike actions and has found them to be extremely effective," Ms Rani said. "Either the strikes, demonstrations or legal actions were instrumented by worker collectives that are able to take up a range of issues that are usually handled by unions." 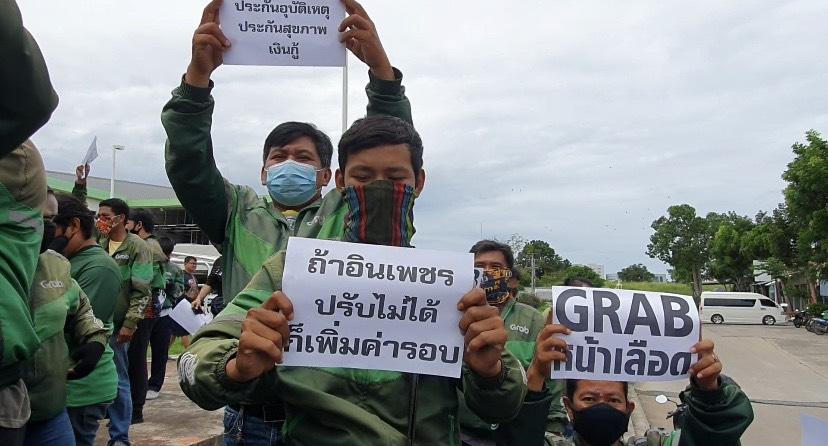