Bangkok climbed four spots to 71st out of 109 cities in the Smart City Index for 2020, supported by some elements in the technology pillar, especially with regard to work and school. 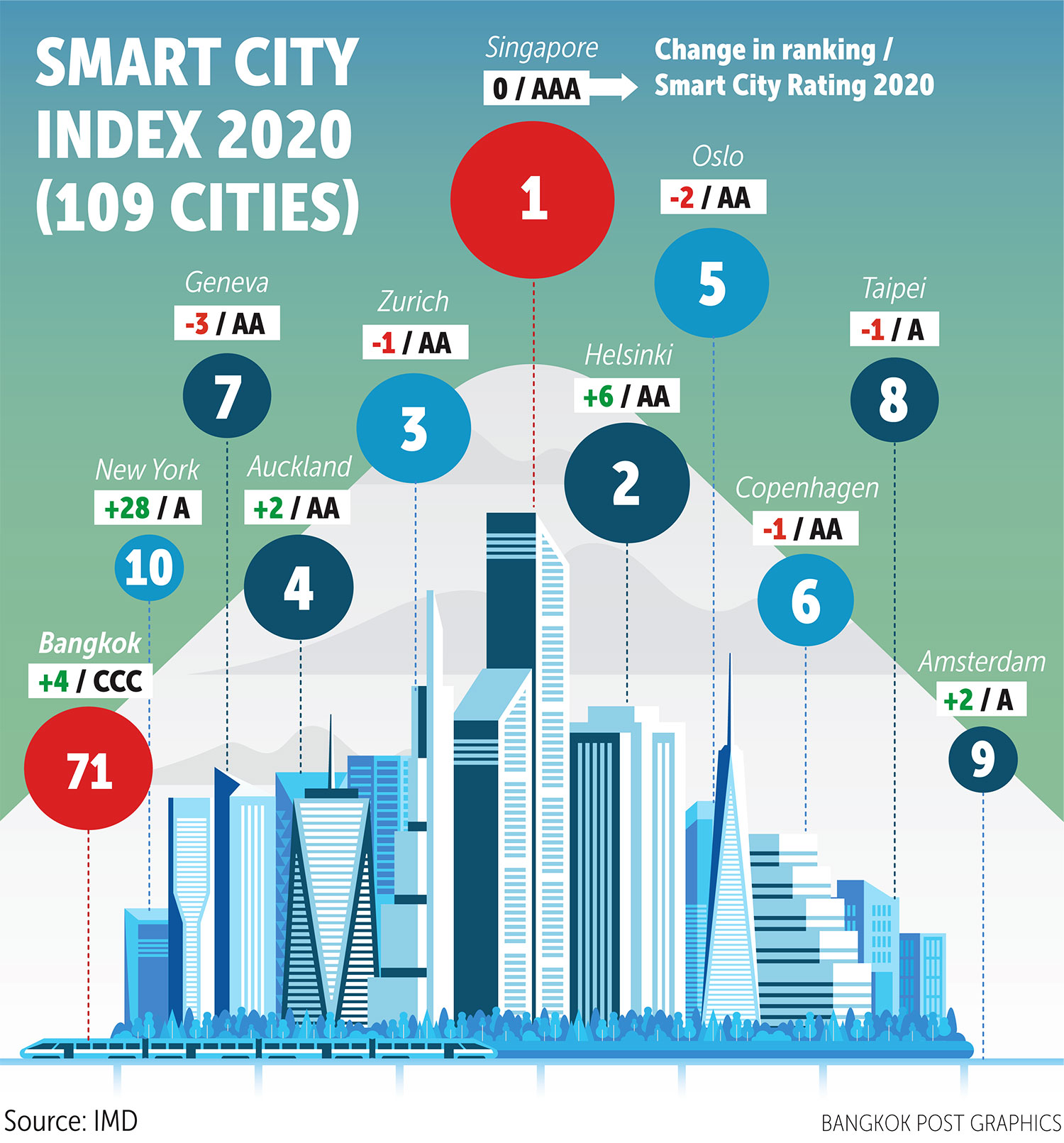 But air pollution, road congestion and corruption remained causes for concern among residents.

The 2020 report was jointly commissioned by the Institute for Management Development (IMD) and the Singapore University of Technology and Design (SUTD). The index ranks cities based on economic and technological data, as well as by citizens' perceptions of how "smart" their cities are.

Hundreds of citizens from 109 cities were surveyed during April and May and asked questions about the technological aspect of their cities in five key areas: health/safety, mobility, activities, opportunities and governance.

"For Bangkok, 71st is actually a respectable position," Arturo Bris, an IMD finance professor, told the Bangkok Post in an email interview. He said the capital scored similarly to various European cities.

Residents in Bangkok, like those in many larger cities in developing economies, consistently identified air pollution and road congestion as major problems, while also highlighting security and corruption, he said.

The city needs to improve these four areas in both real terms and in the perceptions of the populace by promoting these improvements, Mr Bris said, adding: "This is particularly true in the fight against corruption."

Based on the report, 69.4% of respondents in Bangkok were concerned about air pollution, followed by 56.6% about road congestion and 55.7% about corruption.

Mr Bris said citizens perceived that technological aspects in general, and those associated with work and school in particular, were "well above the levels of Bangkok's peers".

"We cannot ignore the impact of Covid-19," said Mr Bris, who is also the director of the World Competitiveness Center. "Those with better technology manage the pandemic better. Smart cities are not the solution, but technology helps."

He said the coronavirus crisis is likely to widen inequality between the haves and have-nots of connectivity, both among and within cities.

Singapore was followed by Helsinki in second place and Zurich in third. New York climbed 28 positions to 10th.

The 2020 index saw several European cities fall in the rankings.

"Smart cities closer to the top of the rankings seem to deal with unexpected challenges of the devastating pandemic with a better outcome," said Chan Heng Chee, chair of the Lee Kuan Yew Centre for Innovative Cities at SUTD.

Cities in developed countries tend to have other concerns like unemployment, education and social mobility, she said. Affordable housing is also emerging as a concern for citizens worldwide.