The IRS Sets a Trap for Cryptocurrency Tax Cheats
Business

The IRS Sets a Trap for Cryptocurrency Tax Cheats

The placement of a question on US tax forms concerning holding virtual currency should make it easier to crack down on violators.

Cryptocurrency holders, beware: A surprising change to your 2020 tax form is about to strip away excuses for ignoring the tax rules on bitcoin, ether or other digital currencies.

The Internal Revenue Service plans to alter the standard 1040 form by putting this question on the front page: At any time during 2020, did you sell, receive, send, exchange or otherwise acquire any financial interest in any virtual currency? The taxpayer must check the box "Yes" or "No."

The crypto question first appeared on the 2019 tax form, but on a part of the return that not all filers had to answer. Now it's moving to the 1040's most prominent spot, just below the taxpayer's name and address.

The IRS's move is a strong warning to millions of crypto holders who aren't complying with the law that they must file required forms they may see as burdensome and pay taxes they may think are unfair. It has impressed tax specialists.

"This placement is unprecedented and will make it easier for the IRS to win cases against taxpayers who check 'No' when they should check 'Yes,'" says Ed Zollars, a CPA with Kaplan Financial Education who updates tax professionals on legal developments.

Mr. Zollars notes that U.S. tax authorities have already succeeded with a similar strategy: A simple tax-return question about offshore financial accounts greatly aided their crackdown on Americans hiding money abroad. Since 2009, it has brought in more than $12 billion from individuals. 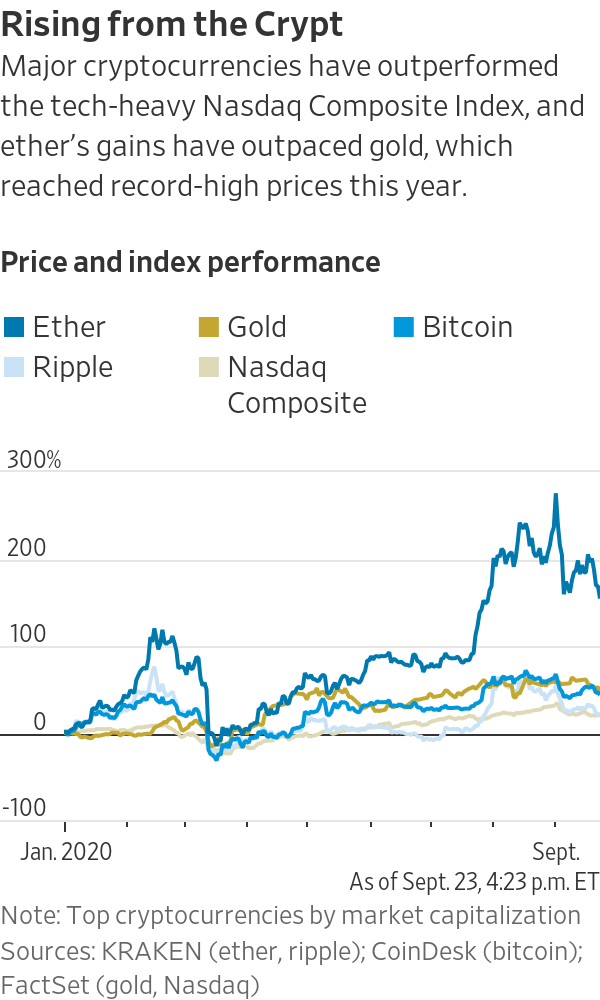 By changing the position of the crypto question and having all 1040 filers respond to it, the IRS making it much harder to claim ignorance of the rules. Lying on a tax return is a bad idea because filers sign returns under penalty of perjury, and juries often side with the IRS when it's clear a taxpayer has lied.

The change to the crypto question and other recent actions show the IRS is taking cryptocurrencies seriously as a threat to the tax system, whether the noncompliance is by enthusiasts who owe little or by sophisticated international criminals. In two recent nontax criminal cases--one involving theft by North Korea and the other involving the sale of child pornography by a Dutch national--the IRS has provided key assistance because of its growing expertise in cryptocurrencies.

The agency is right to be worried about noncompliance, say specialists. Coinbase, a leading cryptocurrency exchange and custodian, said it had 35 million total accounts as of July. Chainalysis, a firm that provides crypto investigations software, estimates there were at least 3.1 million active accounts using the popular bitcoin currency in the U.S. between June 2019 and July 2020.

The IRS won't say how many taxpayers have checked the crypto box for 2019. But Dan Hannum, chief operating officer of ZenLedger, a crypto tax-prep software firm, thinks a total of fewer than 150,000 crypto owners filed required tax forms for 2017, 2018, and 2019, based on his industry knowledge.

For their part, many crypto users are angry with the IRS's guidance, which treats bitcoin, ether and their kin as property rather than currency. So if a crypto holder uses it to buy something or exchanges one cryptocurrency for another, there's usually a capital gain or loss to report on the tax return.

"Buying a sandwich with cryptocurrency shouldn't be a taxable event," says Sean Cover, a New York City cryptocurrency holder who works in finance for a nonprofit group. He says that in 2017 he had more than 500 transactions on several platforms, and it took him 10 hours to prepare his crypto tax forms even though he paid for special software.

Like some members of Congress, Mr. Cover supports a $200 threshold before crypto transactions would need to be reported. The IRS says it's up to Congress to change the law.

Tax professionals also have concerns. Earlier this year, the American Institute of CPAs sent the IRS officials a 28-page letter taking issue with its guidance that said the crypto received from reorganizations called forks and marketing giveaways called airdrops can be taxable to recipients. It asked for other clarifications as well, such as for reporting offshore holdings of cryptocurrencies.

Meanwhile, the IRS is forging ahead with other crypto compliance measures. Earlier this month, it offered rewards up to $625,000 to code-breakers who can crack so-called privacy coins like Monero that attract illicit activity because they claim to be untraceable.

In late August, the agency released guidance affirming that taxpayers who receive crypto for completing "microtasks" must declare it as income. This applies to users of firms like StormX, which makes tiny payments in crypto to people who do small tasks such as playing games, answering surveys, or evaluating products.

The IRS is also sending a new round of letters to crypto holders who may not have complied with the tax rules, expanding on last year's mailing of about 10,000 letters. Tax specialists say the recipients are often customers of Coinbase, which was ordered by a federal court to turn over information on some accounts to the IRS.

Chandan Lodha, the chief operating officer of Cointracker, a software firm selling crypto tax-prep services, says many of its new customers are seeking help not just with 2019 forms (due Oct. 15 for taxpayers with extensions) but also for earlier years--presumably to amend prior returns.

He adds, "Based on what we're seeing, people are starting to get scared."

PARIS: While the United States and Europe waged a 17-year trade battle over subsidies to Boeing and Airbus, China poured money into its own commercial aircraft to take on the Western aviation duopoly.