PM boasts of a million upcoming jobs at city expo

jCareer seekers flock to the Job Expo Thailand 2020 at the Bangkok International Trade and Exhibition Centre in Bang Na district to find a million employment opportunities from many in the business sector. Many hope to get through hard times during the outbreak of Covid-19.

Prime Minister Prayut Chan-o-cha on Saturday opened Job Expo Thailand 2020 at BITEC Bang Na, promising over a million soon-to-be-listed vacancies as the government fights unemployment in the wake of the Covid-19 pandemic.

"The Job Expo is not only being held in Bangkok, it is also running in other provinces across the country. So far, officials say that only about 100,000 people have applied for the jobs on offer. There are still plenty of positions left all over the country," the prime minister told an audience at the event which runs until tomorrow.

"Despite a possible resurgence of Covid-19, the government will continue opening the country to boost tourism and travel. In the long term, we expect to see labourers move to work in their hometowns and communities but that will take time," said Gen Prayut.

Labour Minister Suchat Chomklin said the job expo was particularly designed to help new graduates who may struggle to find work due to a lack of experience.

He said the ministry launched the "Thai Mee Ngan Tam" (Thais Have Jobs) recruitment platform yesterday to list job opportunities from government agencies, state enterprises and the private sector as well as overseas. 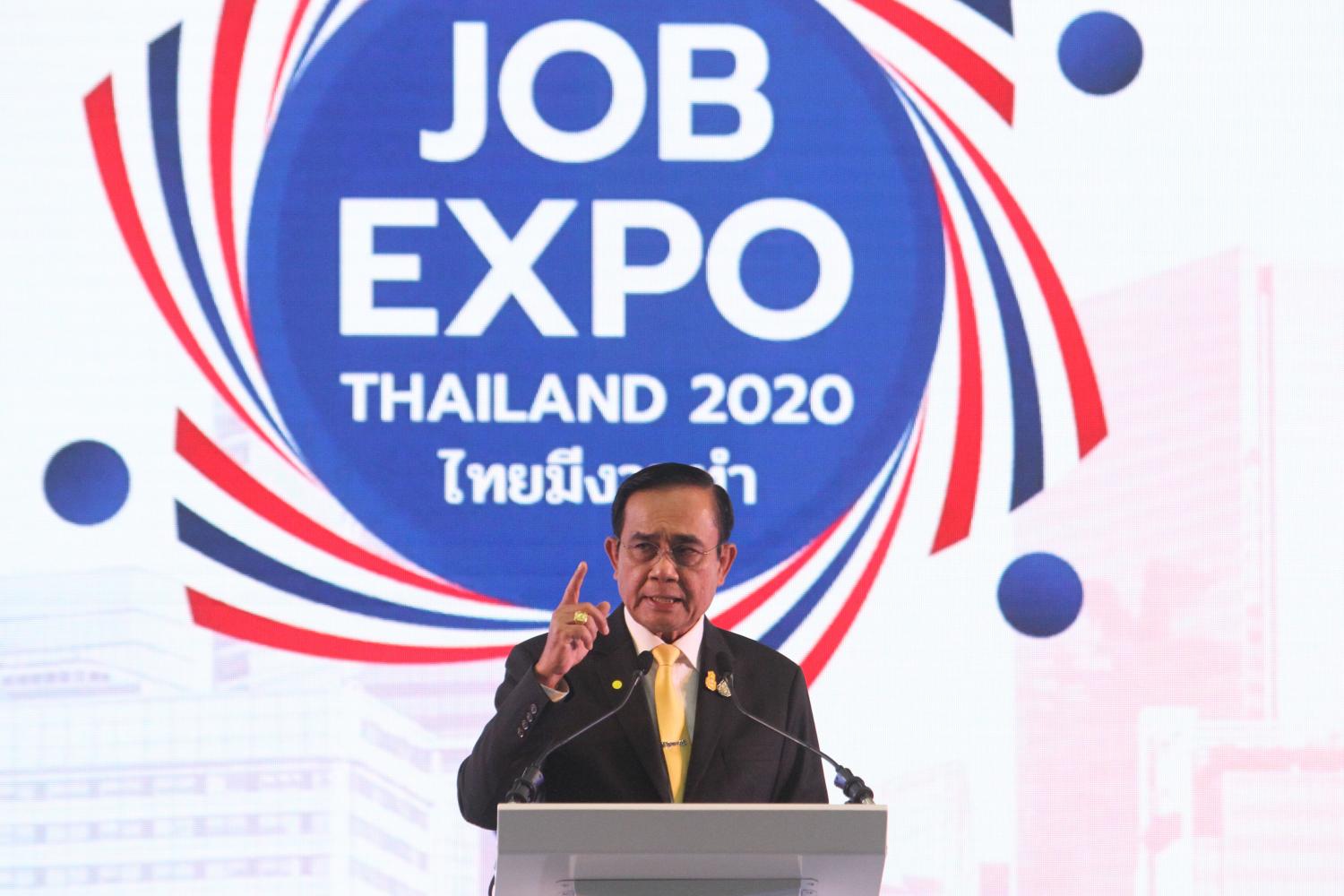 Welcoming all: Prime Minister Prayut Chan-o-cha gestures while presiding over a ceremony for the Job Expo Thailand 2020, which is organised by the Ministry of Labour to help provide over a million job positions in the country and overseas to the unemployed and new graduates during the economic recession caused by Covid-19.

It is estimated that companies will post 200,000 positions across various sectors, while government agencies are expected to post 400,000. About 100,000 overseas jobs and 200,000 vacancies for new graduates are also predicted.

Another highlight of the expo is the "Co-Payment Scheme", a programme created by the Ministry of Labour to help companies hiring new graduates by subsidising 50% of their salary for one year at a total cost of about 23 million baht.

"New graduates may remain jobless for a long time if they are not hired one or two years after graduation.

"The subsidy aims to address this and help them move forward in the labour market," said Mr Suchat.

He said the participating organisations will have to follow the ministry's conditions which prohibit them from laying off more than 15% of employees in one year without informing the Department of Employment.

If violations are detected, the employers will be forced to pay back the subsidy in full, he warned.

Meanwhile, job applicants must have graduated after 2019 to be eligible for the scheme and must register through the government platform and attach copies of their diplomas for the system to match them with available, suitable positions.

One recent graduate at the expo, who asked not to be named, praised the co-payment project.

"The co-payment scheme means the government cares about students in higher education.

"It is timely as there are many fresh graduates desperately looking for jobs," she said.

She added that despite having a highly regarded degree, she had been turned down for many of the jobs that she had applied for over the past few months.

"Most employers chose to hire those who already have experience.

"So, I believe the scheme will encourage employers to take a chance on unproven graduates and give them a chance to work continuously," she said.