More must be done to narrow the gap between digital haves and have-nots in individual countries and between developed and developing economies.

The coronavirus quarantine period turned out to be a productive time for Aliya, a 35-year-old interior designer based in Bangkok.

While working from home, she started an online food business selling premium-quality dumplings and khanom chin, thin rice noodles, topped with a Thai crab curry made from her mother's unique recipe.

Her customers were mainly white-collar workers in the upper-middle class who couldn't eat at exclusive Thai restaurants during the city lockdown.

"Initially, I just wanted to kill my boredom and keep my retired mother busy during the quarantine time. But it became a good business," she said, adding that she earned more than 7,000 baht a week from selling the two dishes online.

"I've got some well-to-do friends on Facebook and Instagram. They spread the word about my menu and brought in new customers."

However, Ms Aliya does not represent the whole story of people's experiences under quarantine. There are also stories of failure and dismay.

In a low-income residential area of Bangkok's Klong Toey district, 34-year-old Usa Sankan experienced a dramatically different situation. She lost her job at a warehousing company and had little opportunity to launch an online business despite the growth of e-commerce during the lockdown.

"I always thought about making pastry and selling it online. It's my dream to create my own business. But I don't know where to start," she said.

Ms Usa doesn't have a proper kitchen in the rental unit shared by six family members. Neither does she have any savings to buy ingredients because she is a breadwinner and most of her income must go to feed her child and parents.

It's no surprise that she can't afford a good smartphone and high-quality internet -- in contrast to Aliya who can easily connect with online customers.

The stories of the two women illustrate the challenge of the digital divide, which has perpetuated unequal opportunity among individuals and undermined the economy and society in Asia Pacific countries. 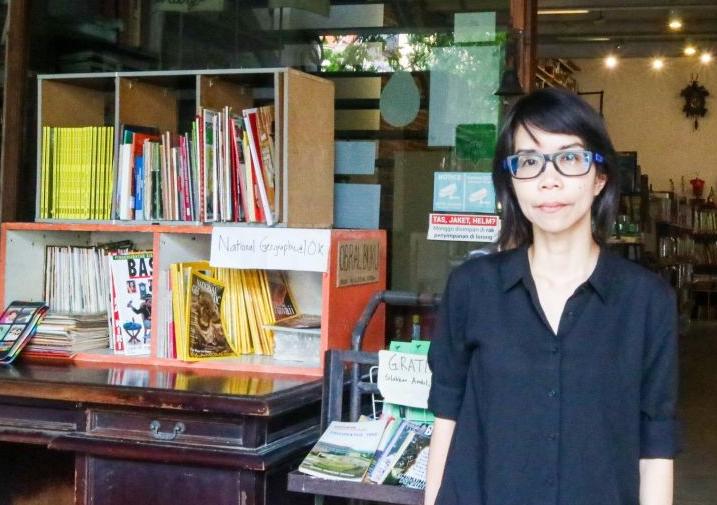 One of the most distressing aspects of the digital divide during the pandemic has been its impact on children's education. From Thailand and Indonesia to China, lack of internet access among low-income families and rural residents has prevented millions of children from participating in distance education during lengthy school closures.

Some viral posts on social media have shown students in remote areas of the Philippines and Indonesia climbing trees and mountains to get a good internet signal for their classes.

According to the United Nations Economic and Social Commission for Asia and the Pacific (Escap), more than half of the region's 4.1 billion people remain offline.

Less than 5% of the population in the least developed, landlocked developing and Pacific island countries has access to high-speed and affordable internet. Women and girls have lower internet access than men.

The figures show that not everyone is sharing in the benefits of the online world, even though e-commerce and service marketplaces have been booming in recent years -- thanks to the increasing internet usage and smartphone penetration, and a growing middle class with more purchasing power.

"As we are planning to chart our future in the post-Covid-19 world, we need to address the digital and technology divide with urgency. We cannot let this divide drive new forms of socio-economic inequality," Armida Salsiah Alisjahbana, the UN under-secretary-general and executive secretary of Escap, told a recent online forum on digital inclusion.

Digital disparity can be seen not just among individuals within a country, as in the case of Ms Aliya and Ms Usa. The gap is also significant between developing and developed economies.

Among the latter is South Korea, where the government has made information and communication technology (ICT) a priority for decades and has invested aggressively in digital skills and infrastructure. It was able to flatten the Covid-19 curve without shutting down the economy because nearly all of its citizens are connected to some of the world's fastest networks.

A World Economic Forum report in August indicated that while the Organisation for Economic Co-operation and Development (OECD) countries are seeing a gross domestic product (GDP) contraction averaging 7.6%, South Korea is on track for a drop of only 0.8% from 2019.

Singapore is another developed country with a strong digital foundation and aggressive plans to make it even stronger. The government announced plans to spend an estimated S$3.5 billion on ICT procurement in the 2020 financial year, up 30% from 2019. The spending will spur the economy and support businesses, especially small and medium-sized enterprises (SMEs), in recovering from Covid-19 and strengthening resilience to future crises.

This push will accelerate digitisation and expand the post-pandemic digital economic opportunities for Singapore, which already has much higher internet penetration than the average for Asia Pacific nations.

According to Escap, internet bandwidth in Singapore is four times that of Thailand, Vietnam and Malaysia and 58 times that of Myanmar.

While the digital economy looks promising for developed nations, many developing and transitional economies will likely fall behind if their governments don't take substantial measures to accelerate digitisation. 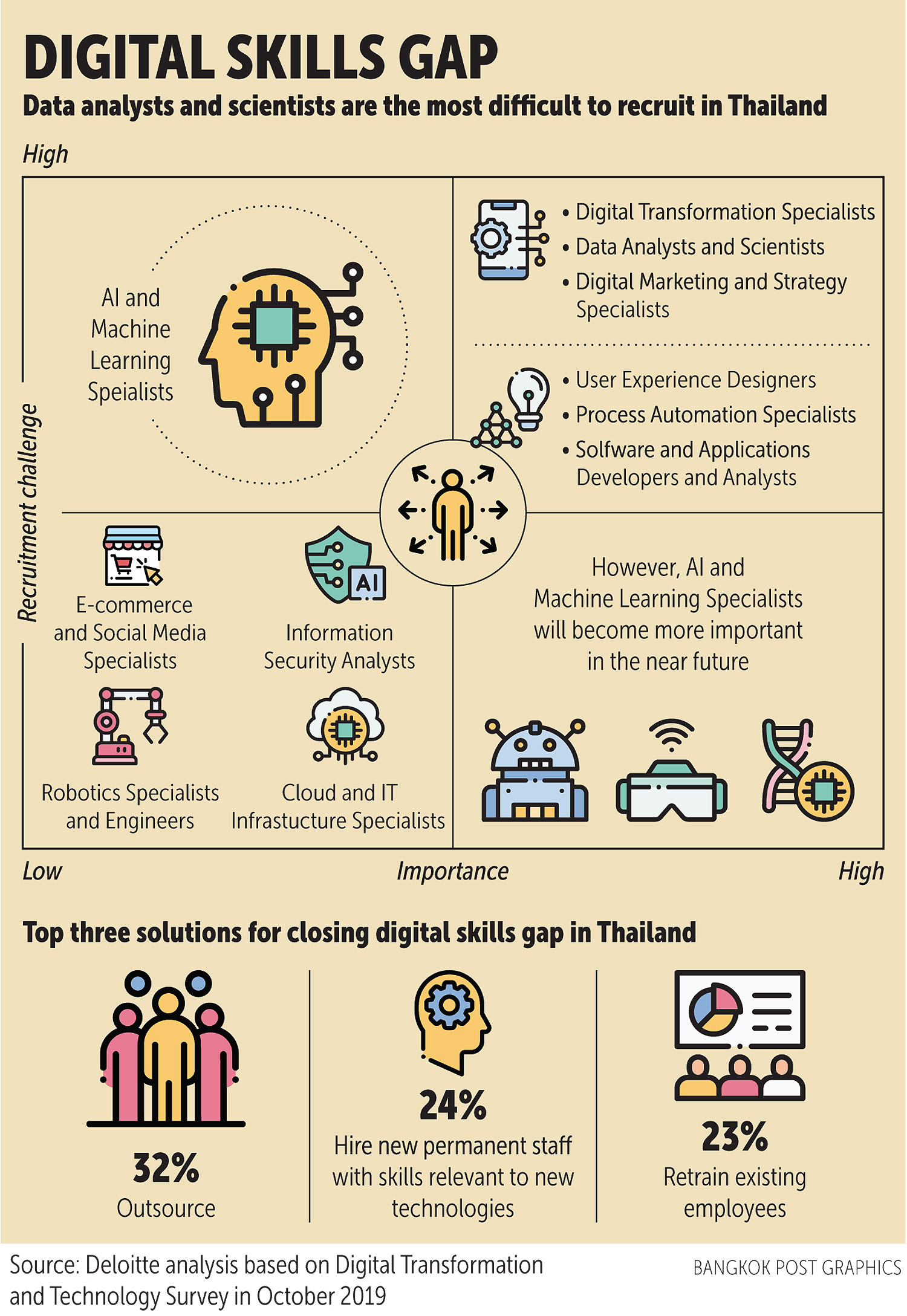 Indonesia and Thailand are among the developing Asian countries that have been making a strong effort to embrace high-tech businesses and the digital economy in recent years.

According to World Bank data, around 48% the Indonesian population and 67% of Thai people used the internet in 2019. Those rates were much lower than for neighbours such as Malaysia (84%), Singapore (89%), and South Korea (96%).

To close the digital gap, the Indonesian government has put a major effort into providing nationwide access to electricity, which will lay a foundation for broader internet access that will reach even people on distant islands.

The Thai government, which is counting on the digital economy to lift the country out of the middle-income trap, has initiated several programmes to enhance digital skills and infrastructure, including providing training and free WiFi in rural areas.

The expansion of digital infrastructure has partly driven the surge of e-commerce in Thailand and Indonesia during the coronavirus lockdown.

For example, the number of new sellers joining Lazada Thailand, one of the top online shopping marketplaces, increased more than 75% during the March to May lockdown.

Deliveries of food and services via the Indonesian do-it-all app Gojek rose despite the Jakarta lockdown that forced the app operator to halt motorcycle taxi service and reduce staff numbers.

However, challenges remain. Many traditional organisations and companies are expected to struggle with making the digital transition because it will require them to adjust rigid organisational structure and invest in financial and human resources.

The consulting firm Deloitte conducted a survey of Thai companies and found that their top three challenges for digital transformation centred around people issues -- the talent gap, digital culture, and organisational silos.

"In the short run, the problem of the gap in digital skills might not be clearly seen or significant enough in most industries, except those highly affected by digital disruption, for example, telecoms and financial services," said Narain Chutijirawong, business development director at Deloitte Thailand.

"In the long run, this problem will become more prominent and severe. The world is shifting to be more deregulated. Almost everything will be digitised. Sooner or later, no business will be immune to digital disruption.

"Hence, it is vital that all businesses must prepare and start their own digital transformation journey." 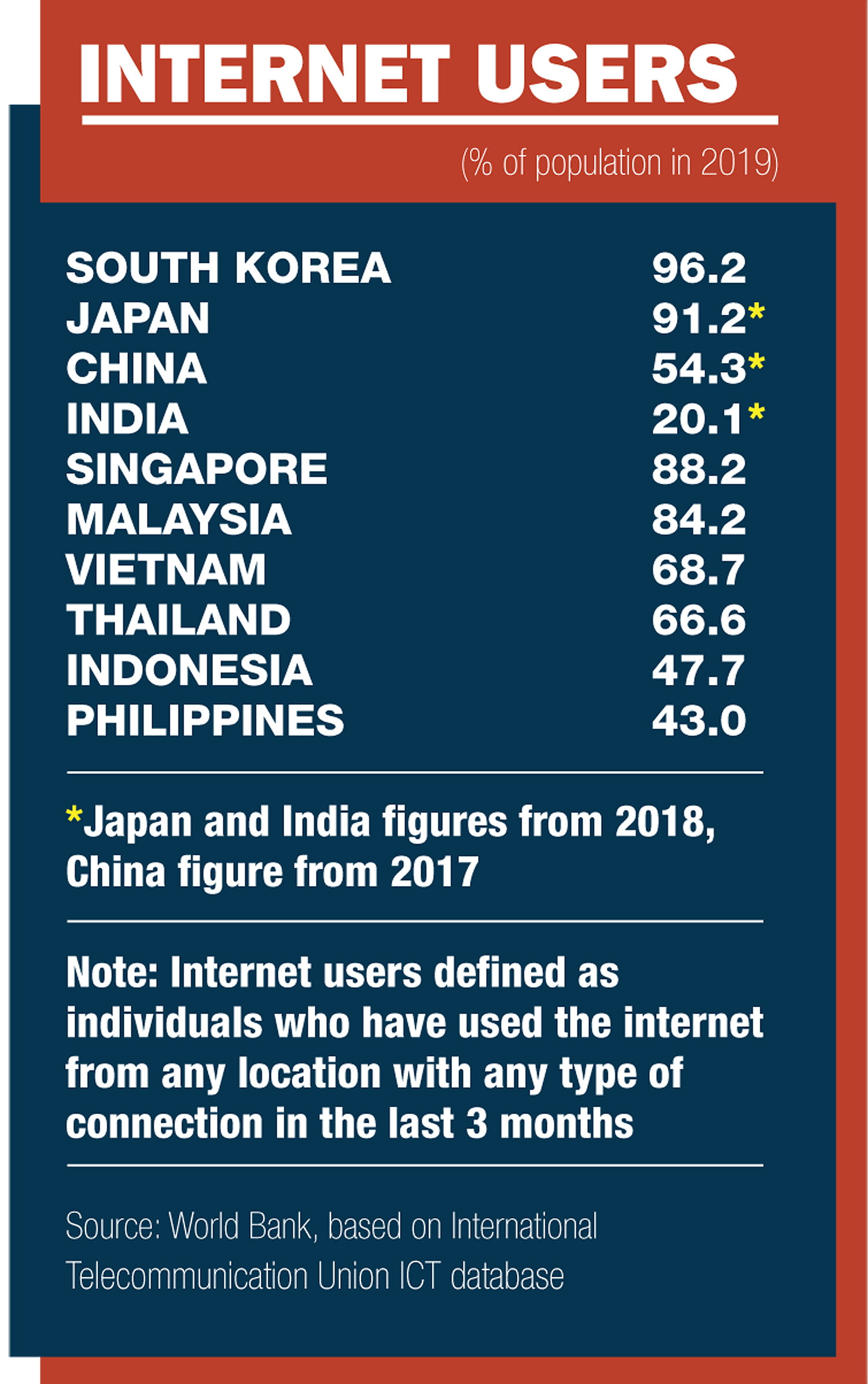 But getting started on that digital journey is not as easy as some advocates make it seem, especially for small businesses and individual entrepreneurs, an Indonesian advocate points out.

"There is a strong narrative, propagated by government and big businesses, that if people just work hard, improve their online and digital skills, be creative and innovative in shifting their stores to online delivery, they will improve their livelihood and opportunities," said Kathleen Azali, digital rights programme manager for EngageMedia, a non-profit organisation that campaigns for the use of media and technology to promote social change.

"I think we need to question that narrative, as it can unjustly shift structural, systemic problems to individual responsibility."

Covid-19 has not just exposed digital disparity, Ms Azali said, but has been "a great unequaliser" in an era already marked by high inequality.

The pandemic has underlined structural failings such as uneven access to the internet and electricity, economic inequality, and even collusion of state power and tech platforms that exacerbate the digital divide.

In Indonesia, this was illustrated by the controversy over a conflict of interest involving Covid-19 relief funds and an online education startup with connections to the government.

The CEO of Ruangguru, Adamas Belva Syah Devara, was a special presidential staffer in the administration of President Joko Widodo. His company was appointed to manage part of the government's pre-employment programme that provided online training for laid-off workers.

The Minister for Economic Affairs later admitted that Ruangguru and seven other companies had been appointed without a public tender process. Mr Belva denied playing any part in the appointments, and resigned from his position in the presidential office amid the backlash.

"Instead of having concrete actions and policies to support the most marginalised, public funds instead are being spent to sustain leading businesses that provide digital platforms for education, work and e-commerce, with questionable results and without due accountability," said Ms Azali.

Economic inequality has been observed in many Asia Pacific countries, including Thailand where conglomerates, usually with high digital capacity, can access loans and financial resources better than SMEs. The latter often lack credit and connections to bankers.

Despite the rise of unemployment and poverty during the coronavirus lockdown, the share values of giant Asian tech companies such as Alibaba Group and Xiaomi have been skyrocketing since March.

The deepening inequality has escalated political and social instability, including in Thailand and Hong Kong, where angry young people have staged numerous protests to call for the government's resignation.

"I don't think there is a right solution for ending the digital divide. But it is very important to first have a proper assessment of the political and socio-economic conditions on the ground," said Ms Azali.

"We need to identify the forces that create and perpetuate the divide, and involve the stakeholders before starting an initiative, training or building infrastructure.

"Otherwise, brute-forcing solutions that we design without understanding conditions on the ground, or without involving the relevant people, will likely fail."