Thailand edges up to 39th in digital competitiveness
Business

Thailand edges up to 39th in digital competitiveness

Thailand climbed one spot to 39th out of 63 countries in the digital competitiveness ranking for 2020 released by the IMD World Competitiveness Center, supported by better technology investment. 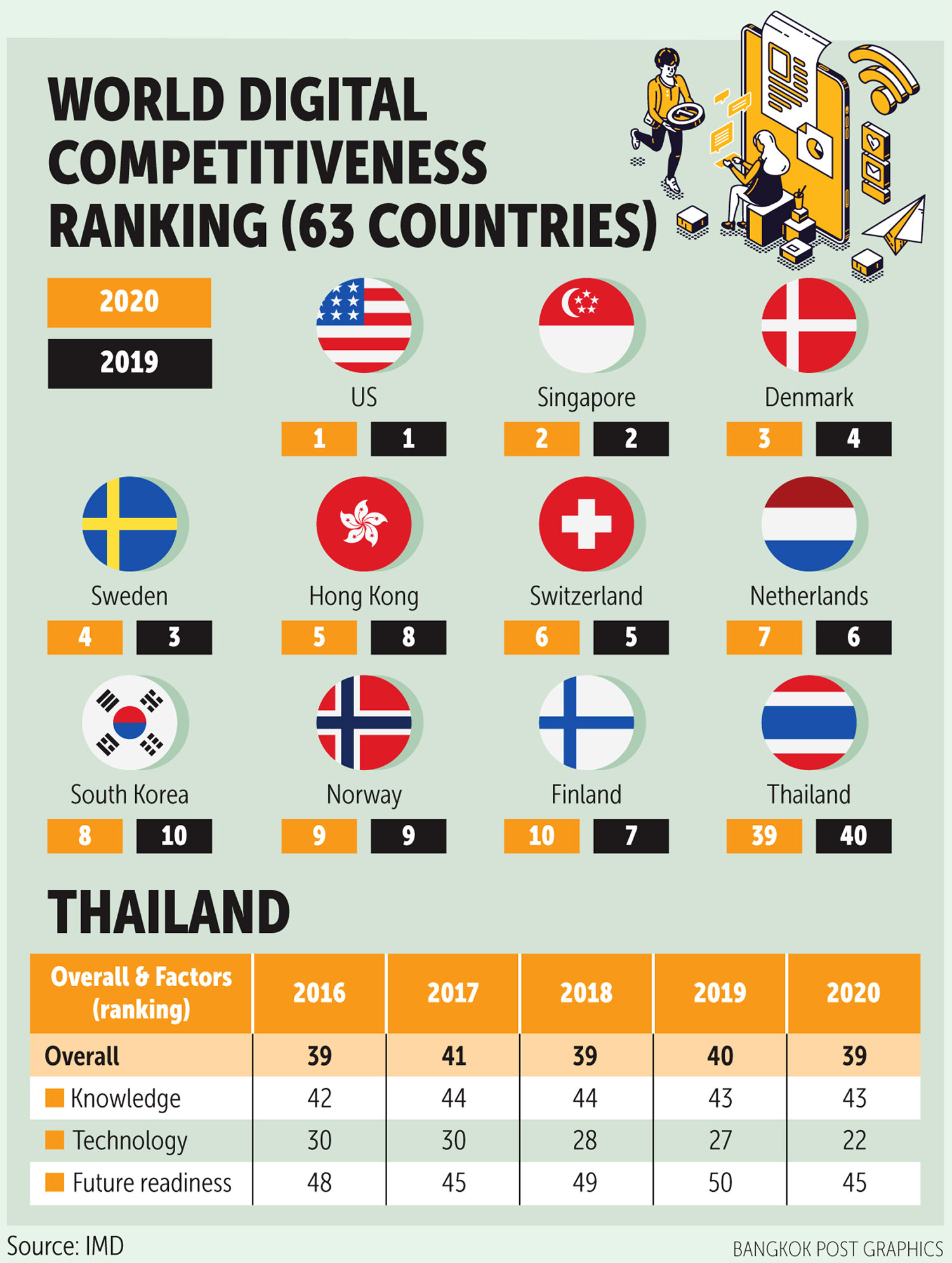 The US retained the pole position in the ranking, followed by Singapore and Denmark.

The ranking measures the capacity and readiness of 63 nations to adopt and explore digital technologies as a key driver for economic transformation in business, government and wider society.

The better the ranking, the more competitive the country's use of digital technologies. The rankings are based on three main factors: knowledge, technology and future readiness.

In terms of technology, Thailand rose five positions to 22nd, partly due to improvements in telecom investment and a corresponding increase in internet speed.

"Adoption of 5G is a key future technology, and with Thailand's first-mover advantage we would expect the benefits to accrue in the future," Christos Cabolis, chief economist at the IMD World Competitiveness Center, told the Bangkok Post. "However, 5G is just a tool. It does not bring these benefits of itself."

Technology not only affects how businesses perform, but also how countries function and prepare for the future, he said.

Based on knowledge factors, Thailand retained 43rd place. In training and education sub-factors, the country declined five positions to 55th.

According to the future readiness factor, which refers to the level of the country's preparedness to exploit digital transformation, Thailand climbed five spots to 45th, supported by improvements in e-government services and participation.

"If Thailand needs to climb the ranks faster, education is another key component to future competitiveness," Mr Cabolis said.

Among Asean peers, Indonesia remained in 56th place and Malaysia stayed at 26th. The Philippines fell two positions to 57th.

Malaysia retained 19th in knowledge factor with strong training and education. It fell one position to 20th under technology and dropped to 32nd in future readiness.

"The post-Covid world will be characterised by a K-shaped recovery with two types of economies -- those that recover quickly and those that recover more slowly," said Arturo Bris, director of the IMD World Competitiveness Center.

He said the recovery could be driven by many factors, such as the health of public finance.

The pandemic, Mr Cabolis said, could have a bearing on the ranking next year.

"We see those economies that perform well in the ranking tend to display certain characteristics, which may work together as a springboard for economic recovery," he said.

For example, countries with a greater proportion of high-tech firms tend to be more adept at applying tech-driven solutions to problems, Mr Cabolis said.