Shopping malls Siam Paragon and CentralWorld closed early Thursday because of a large number of protesters gathering in the Ratchaprasong area. (Photo by Nutthawat Wichieanbut)

Big shopping malls in the middle of Bangkok's main shopping district are bracing for another whammy on top of the deadly Covid-19 crisis after anti-government demonstrators on Thursday gathered at Ratchaprasong intersection, the site of a major crackdown in 2010 that ended with scores of people killed.

CentralWorld, Siam Paragon, Siam Center, Siam Discovery, The Market and Big C Supercenter on Thursday gradually closed some entrances of their complexes, which are sensitive to the protests, while many luxury shops at Siam Paragon including Gucci and Prada had closed their shops by around 4pm.

McDonald's Amarin also shut its store on Thursday, while Big C Supercenter has adjusted its service hours to 6pm instead of 10pm.

Central Pattana (CPN), the operator of Central shopping complexes, said in a statement on Thursday that its shopping centre, including the Groove zone, will be temporarily closed from 6pm to relieve the traffic congestion around the area.

Apart from closing the stores, each retailer in the area, including CentralWorld, Gaysorn and Siam Paragon, has installed fences around the peripheries to deter protesters from entering.

Many security guards have been ordered to stand and monitor around their buildings.

A source from CPN who asked not to be named said that the fresh political gathering at Ratchaprasong would aggravate the retail sector's problems.

"With the company's continuous marketing efforts to restore the shopping sentiment at Ratchaprasong, we are about to see a full recovery of Thai retailing," the source said.

A salesperson at one international fashion brand said: "Businesses in the Ratchaprasong area are now at high risk. The protests are quite beyond the government's control. In the past, we've chosen to open our shops at several retail complexes in this area because it is the prime location, but now it has become a high-risk area." 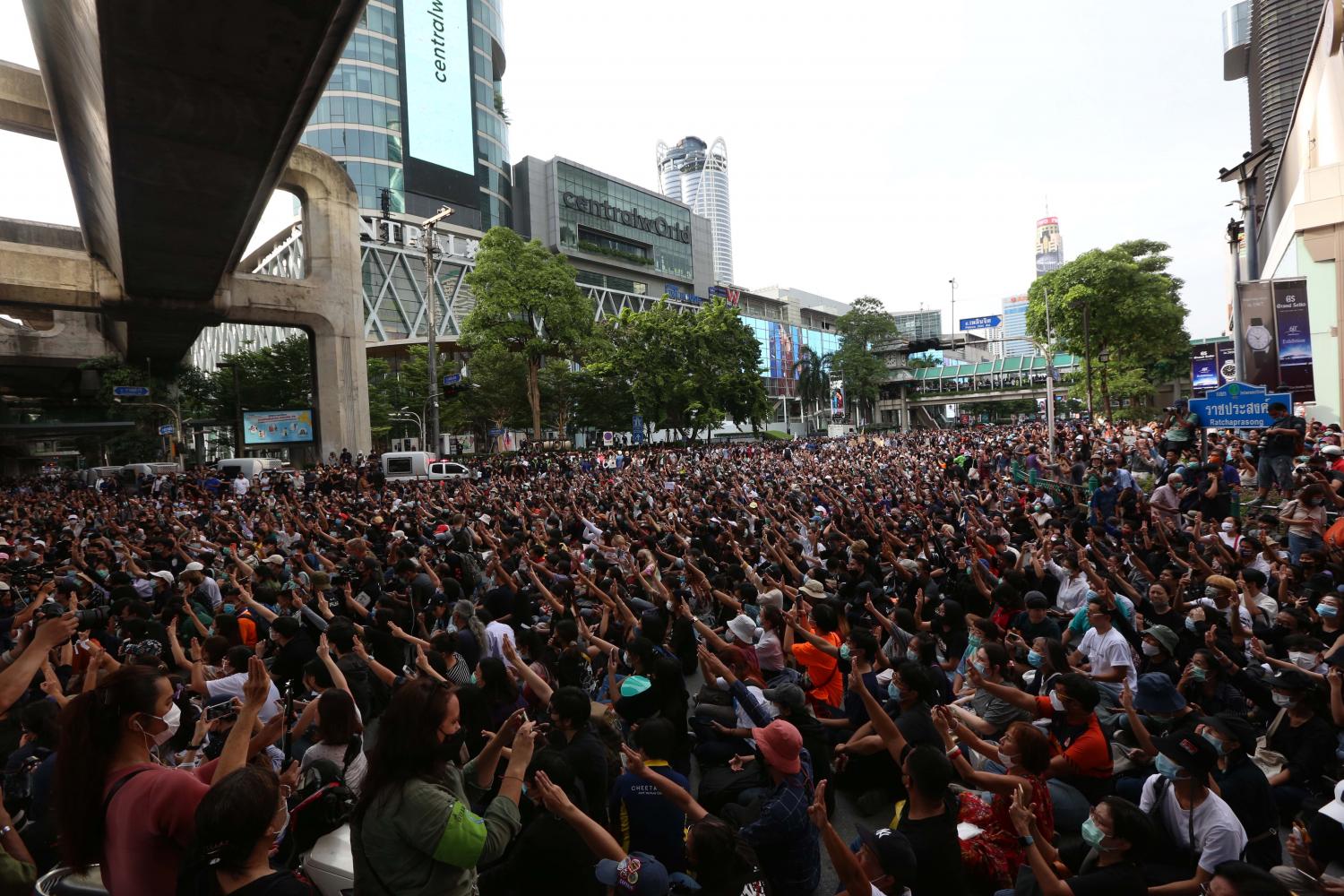 Protesters gathering in front of CentralWorld.   (Photo by Pattarapong Chatpattarasill)

An employee of McDonald's at Big C Ratchadamri said the head office had announced closing some McDonald's stores near the Ratchaprasong area at 6pm for the safety of staff.

"With the lessons learned in the past, we've prepared many safety levels and are ready to activate the proper code to match with each situation," the worker said.

Kalin Sarasin, chairman of the Thai Chamber of Commerce, said the protest at Ratchaprasong intersection would produce more or less impact on the retailers, saying the extent of the impact will be based on the number of protesters and how the government can effectively and peacefully manage the protests.

He voiced agreement with the government's declaration of a state of emergency in Bangkok, noting that the declaration is needed to keep peace and order in the country.

Law enforcement to maintain peace and order, as well as ensuring the safety of life and assets of the people, is an important factor to build up the confidence of foreign investors, he said.

"Overall consumers have already sensed the impact of political protests as gauged by the consumer confidence index in September, which fell for the first time in five months," Mr Kalin said. "The business sector is worried that consumers may slow down their spending if the protests are prolonged and affect the economy."

According to Mr Kalin, the economy is on the path to a recovery driven by a spate of government stimulus packages to boost consumer spending in the last quarter.

"The government should accelerate communicating with the public about state stimulus packages to kick-start consumer spending and make it easy to access the incentives offered," he said.