China Wants to Screen You for Coronavirus -- and Your Frozen Fish

Many countries, including the U.S., say there is little to no evidence food or its packaging spreads the virus, but Beijing isn't taking chances

Many countries around the world are screening people at their borders for the coronavirus. China is also inspecting incoming frozen fish.

Since June, when Covid-19 cases emerged at a market for seafood, meat and vegetables in Beijing, Chinese authorities have identified imports of refrigerated and frozen foods as a potential culprit. A dramatic case for caution is playing out now in the city of Qingdao, where officials are testing roughly 11 million residents for the coronavirus after an outbreak they say is linked to two dock workers who were infected last month. The workers were likely infected after handling imported frozen seafood that was contaminated by the virus, officials said.

Concern about food shipments has prompted large-scale inspections in the country. Last month, China's national customs agency said it had tested at least half a million samples taken from packages of so-called cold-chain foods, which would include fish and meat arriving at the country's ports.

The scrutiny uncovered traces of the coronavirus in some cases, such as on packages of frozen squid from Russia and fish from Indonesia and Norway in recent weeks. Authorities suspended imports from at least two entities--an Indonesian seafood company and a Norwegian-flagged fishing ship--for a week. 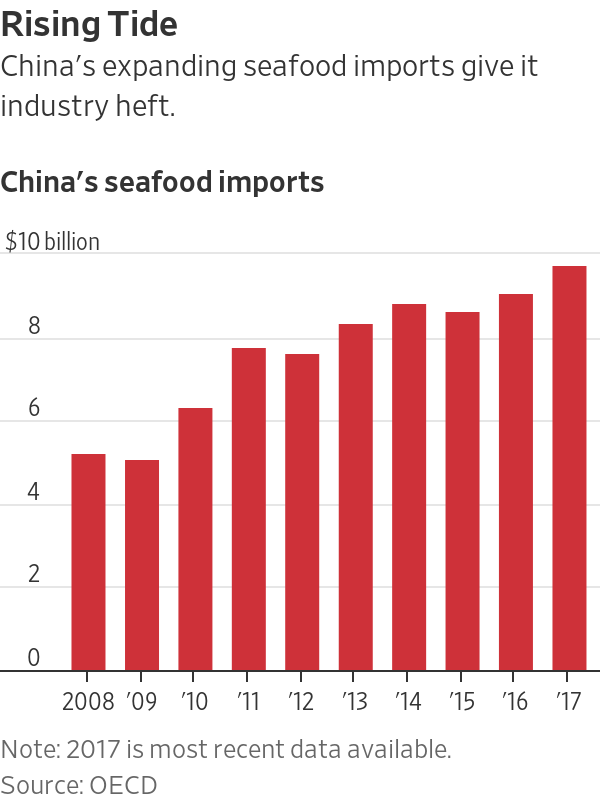 China is an outlier in this area. The U.S. Centers for Disease Control and Prevention says there is no evidence food is linked to spreading the coronavirus--but hasn't ruled it out as a possibility. The risk of infection from food or its packaging is "thought to be very low," it says. The World Health Organization says there is no need to disinfect food packaging.

Authorities in places such as Singapore and New Zealand say they haven't seen evidence of Covid-19 transmission through food or packaging.

China's measures, which include virtual spot-checks of factories belonging to its overseas food suppliers, have also been received with skepticism from business groups and other bodies. Controls such as testing of imported products "are not scientifically justified," the International Commission on Microbiological Specifications for Foods, a scientific organization, said in an opinion paper in September.

Commission member Jeff Farber, a former director of microbial food safety for Canada's federal health agency, said China's approach "creates a whole other layer of confusion and unnecessary cost to the industry." He said that he didn't rule out the possibility food workers could be infected by contaminated fish, but that the chance of transmission from inanimate surfaces appeared very small.

Some researchers say transmission is technically possible when food is shipped at low temperatures, which tend to preserve viruses, though it's a long shot. In a country like China that has nearly eliminated Covid-19 within its borders, they say, even the small possibility of reintroducing the virus could be worth considering.

"If you don't have (the virus) in your country and you suddenly have it, it could have hitched a ride on food," said Dale Fisher, an infectious disease specialist at the National University of Singapore who chairs the steering committee of the WHO's global outbreak alert and response network.

Getting Covid-19 from imported frozen salmon or squid would depend on an unlikely chain of events, scientists say. First, the virus would need to spread from an infected person to the surface of the food or its packaging--through a sneeze or cough, for instance. Then, it would have to survive the international shipping process without disintegrating.

Upon arrival, a live batch of virus would have to be present in large-enough quantities to cause an infection. Finally, someone--such as a consumer or food handler--would need to get infected by, say, touching the live virus on the food or packaging and then touching their face. 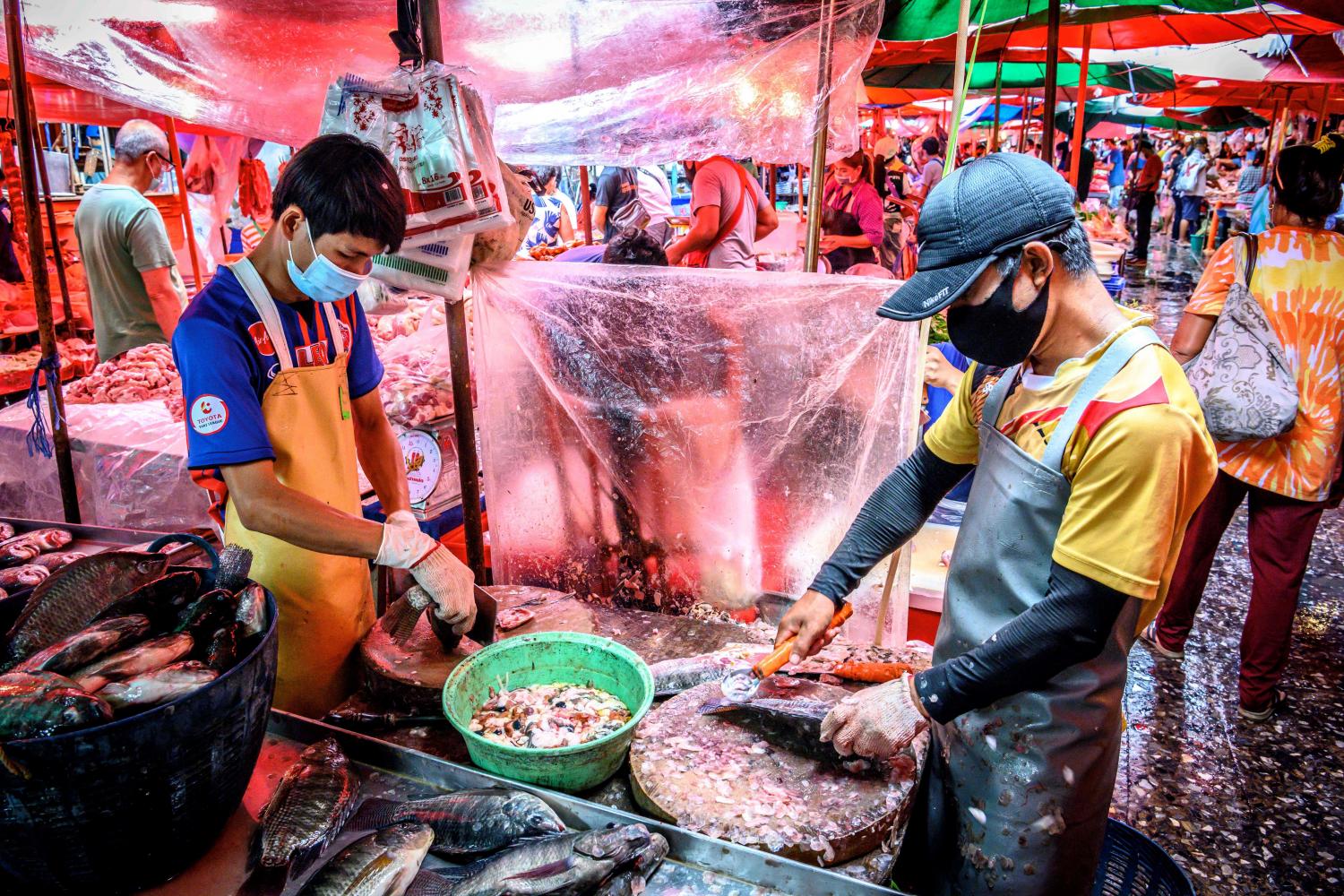 China sprang into action in June after an outbreak tied to a wholesale market in Beijing called Xinfadi infected about 300 people. Before the outbreak, the capital city hadn't recorded community transmission in more than 50 days, leading to a probe into how the cluster originated.

Investigators discovered traces of Covid-19 on a slab of salmon, as well as in a nearby ditch and elsewhere around the market, the government said. At the time Liu Jun, a researcher from the National Institute for Viral Disease Control and Prevention, told state media the virus could have been spread by contaminated seafood or an infectious person.

After the probe, Chinese authorities articulated a clearer, though not definitive, conclusion. In an August interview on state television, Wu Zunyou, chief epidemiologist of the Chinese Center for Disease Control and Prevention, said the investigation had all but excluded the possibility that the Xinfadi outbreak was triggered by an infectious person.

Investigators concluded the outbreak likely originated from "multiple types of imported aquatic products and their packages," he said. Workers who touched the products and materials contaminated their hands and later became sick, Mr. Wu said.

Researchers from the Chinese CDC found the virus at Xinfadi was of a strain prevalent in Europe, suggesting it was imported, according to a paper published in September in Biosafety and Health, a journal sponsored by the Chinese Medical Association.

Local authorities have been more definitive in the case of the two Qingdao port workers, who tested positive for the coronavirus after a night shift spent loading and unloading frozen seafood imported from abroad. Testing showed some of the packages also carried the virus. Chinese disease control authorities compared genetic sequences of the two sets of viruses and found they were similar.

"The transmission chain is clear and is linked to overseas imports," said Yu Dongquan, deputy secretary-general of the Qingdao city government.

China had begun ramping up its testing policies months earlier. In June, Customs authorities asked companies sending meat, dairy and other food products to the country to sign documents declaring their food hadn't been contaminated by the virus. In July, China suspended frozen shrimp imports from three Ecuadorean companies after traces of the virus were found on packaging. In August, Shenzhen authorities detected the virus on chicken wings from Brazil.

Scientists say the nucleic acid tests used for such inspections likely only spot traces or fragments of viral genetic material on the food or packaging, but don't check whether the virus is still infectious, which would involve a hazardous laboratory process. China's customs department and CDC didn't respond to requests for comment.

Scientists are still researching how the virus behaves on food surfaces when the temperature is kept low. A preliminary study by Dr. Fisher of the National University of Singapore suggested the virus could stay alive and infectious on refrigerated or frozen salmon, chicken and pork for as long as three weeks.

Chungen Pan, a virologist at the research institute attached to Chinese animal-feed conglomerate Guangdong Haid Group Co. in Guangzhou, gathered a team of Chinese scientists to look at the same question and found the virus could survive on chilled salmon for more than a week. Dr. Pan said her study--which has yet to be published--suggests customs officials should be cautious.

Others say the chances are negligible. Don Schaffner, a Rutgers University professor specializing in food science and an adviser to the industry group Global Cold Chain Alliance, said: "What we do know is, COVID-19 is spread person-to-person and seldom if ever transmitted from surfaces."

Australian banks have 'too much money', more may be on the way