KBank's net profit for the nine-month period was 16.2 billion baht, down 45.8% year-on-year. (Photo by Pornprom Satrabhaya)

Both the third-quarter and nine-month net profit of major SET-listed financial institutions saw a double-digit decline on a year-on-year basis as banks beefed up loan provisions to cushion against higher bad debt prospects.

For the nine-month period, KBank's net profit tumbled mainly because it set aside a higher expected credit loss from the preceding period of 17.7 billion baht, or 70.2%, under prudent consideration of factors such as uncertainties based on economic contraction from the outbreak.

The bank also complied with the Bank of Thailand's measures to support customers affected by the pandemic.

Bangkok Bank (BBL), the second largest commercial bank by total assets in Thailand, and its subsidiaries announced net profit for the third quarter of 4 billion baht, down 57.4% year-on-year.

At the end of September, the bank's loans amounted to 2.36 trillion baht, an increase of 0.6% from the end of June, attributed to an increase in loans to businesses and consumer loans. 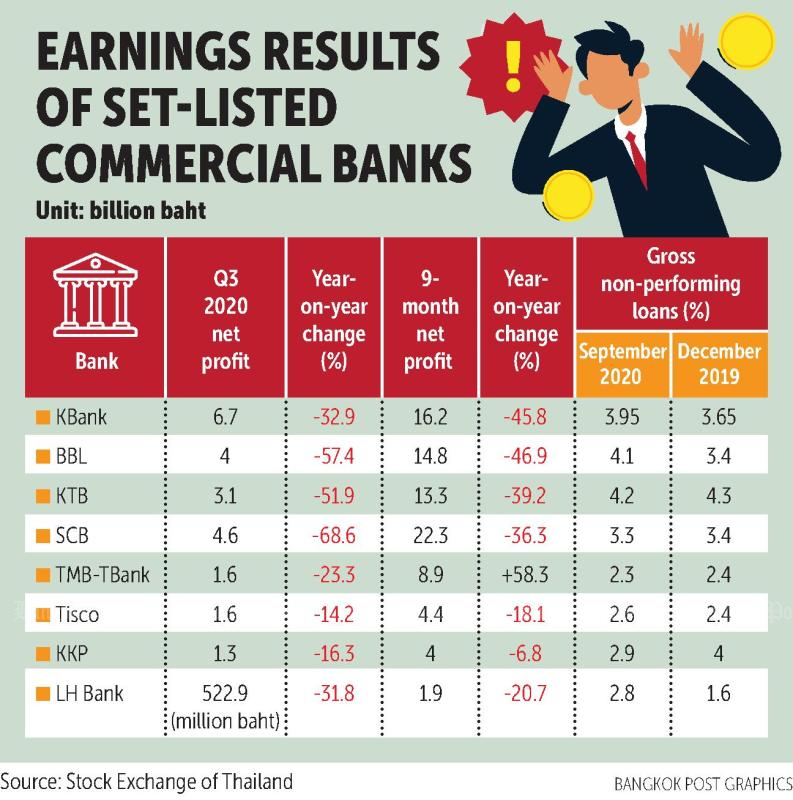 KTB projected credit losses of 35.6 billion baht for the nine-month period, including full provision for one of its large corporate customers operating in the public utilities and services as well as transport sectors.

This was an 87.7% increase from impairment loss from loans in the same period of 2019.

The lower net profit was attributed to higher loan-loss provisions to safeguard against the prospect of rising NPLs amid the persistent pandemic crisis.

The quarter-on-quarter increase in NPLs mainly came from qualitative downgrades for loans under the debt relief programme, as well as from the NPL formation.