Thailand is set to run relatively wide budget deficits over the coming years, as the government seeks to support the economy amid the headwinds from the pandemic and a downturn in external demand. 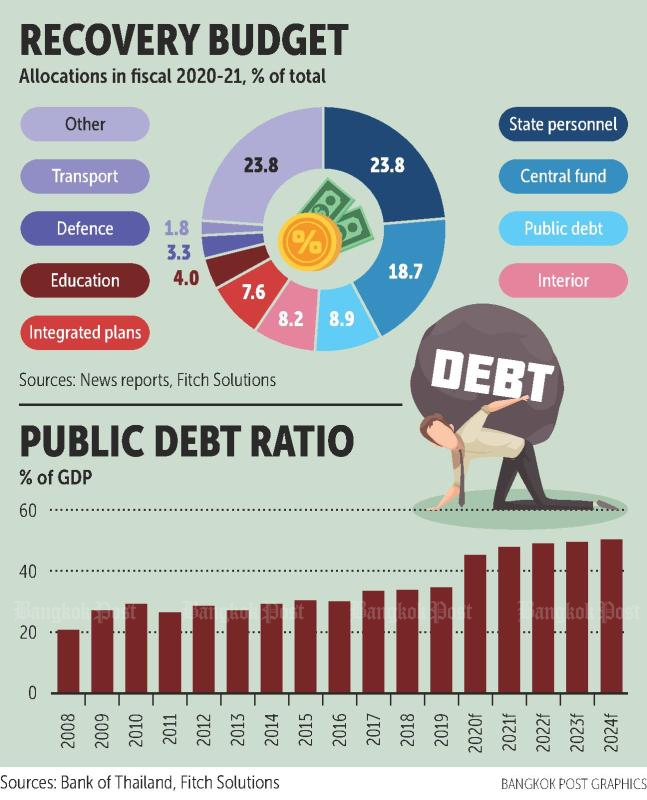 The budget for fiscal 2021 that began on Oct 1 amounts to 3.2 trillion baht, 2.6% higher than the previous year. Given the weak outlook for revenue amid the subdued economic backdrop and cuts to tax rates, we expect the central government budget deficit will be 3.2% of GDP, compared with an estimated 3.6% in fiscal 2020 and 0.8% in fiscal 2019. We forecast a deficit of 2.6% of GDP in fiscal 2022.

The central government budgets do not include general government spending and all the fiscal stimulus measures announced. Indeed, we expect additional stimulus packages to be announced through this fiscal year and the next one to further mitigate the impact of the pandemic on the tourism and travel sector, as well as provide one-off boosts to household incomes.

As of September, central government budgeted expenditure had increased 12.1% year-on-year in the period from October 2019 to August 2020, as policymakers ramped up spending to cushion the shock from the pandemic. This came alongside several stimulus packages, which are estimated to take total fiscal stimulus to 9.6% of GDP.

The latest stimulus package announced on Sept 22 provided 51 billion baht (0.3% of GDP) in shopping subsidies for low-income households. While some of the packages comprised funding diverted from the fiscal 2020 budget, around 1 trillion baht in additional borrowing has been announced, aided by Bank of Thailand government bond purchases of over 100 billion aimed at stabilising yields at a time of asset volatility in March and April this year.

The House committee that screened the fiscal 2021 budget sought to reduce spending in areas that would do less to stabilise the economy and boost household incomes. Education received 130 billion baht (around 0.8% of GDP) in funding, with upskilling the population fundamental to the country's ability to move up the manufacturing value chain.

In contrast, the defence allocation was reduced by 7.8 billion baht in the revised budget, reflecting in part the delay in the planned purchases of two submarines from China.

We estimate it will take around four years for the Thai economy to return to its 2019 level in real terms, as the tourism and travel sector takes time to recover. The economy's large reliance on tourism has been laid bare by the pandemic, and we expect policymakers to boost efforts to diversify the economy. This will entail greater infrastructure, education and skills training expenditure, as well as incentives for foreign investment.

Moreover, ongoing protests since July have highlighted discontent within the population against those in power. To shore up support and create jobs over the coming quarters, we expect greater social spending in line with the cash handouts and shopping subsidies announced in earlier stimulus packages.

An estimated one in five workers were employed by the tourism and travel sector as of 2019. Pressure will form on the government to create employment opportunities until the sector can recover.

While expenditure will remain elevated, government revenues will only gradually recover with the economy. Tax breaks and weaker domestic activity weighed on revenue from October 2019 to August 2020, with revenues falling 5.8% year-on-year.

We expect the economy to grow 3.8% in 2021, following a 6.6% contraction in 2020, with the rebound driven by base effects and a modest uptick in external goods demand.

Tourism will take time to recover and we highlight risks of an upsurge in Covid-19 cases if borders are reopened too quickly without adequate precautions in place. We forecast central government revenues to grow by 2% in fiscal 2021 and 4% in fiscal 2022, which will fail to narrow the deficit at a significant pace.

Despite our prediction for a significantly looser fiscal stance over the coming years, we believe the rise in public debt will not provide significant macro-stability risks. While we forecast the ratio of public debt to GDP will rise from 35% in 2019 to 45.5% in 2020 and 48.3% in 2021, we believe risks can be contained because of high domestic ownership levels and low foreign-exchange exposure.

Only 1.8% of public debt was denominated in foreign currencies as of August, while external holdings accounted for 1.4% of total public debt at the end of 2019. Moreover, the average time to maturity of the debt stands at just under 10 years, according to the Public Debt Management Office.

Nevertheless, risks of increased populist spending cannot be ignored, with uncertainty over the direction of fiscal policy given the changes to the government's economic management team in 2020. We recognise a risk if the economy becomes too dependent on fiscal support, which could lead to problems over the longer term.