A protester checks messages on social media during an anti-government demonstration.  (Photo by Pongpat Wongyala)

Social media has permeated a broad range of activities in people's daily lives, from interacting with friends to running businesses, from catching up with celebrities to staying tuned to the news.

In Thailand, social media has played an immense role in fostering space for people to share their political views and beliefs among their peers.

Social media posts almost doubled from normal days to 40 million on Oct 15, when police dispersed the remaining protesters camping outside Government House in fresh demonstrations that kicked off the day before.

The number of posts remains substantial as the political crisis drags on.

The government's attempts to muzzle certain political posts on mainstream social media platforms also prompted many netizens to explore new online channels, such as Russia-based messaging app Telegram, to stay in touch with their networks for further political engagements.

Thailand has about 53 million social media users, and Thais spend over six hours online per day.

The volume of social media posts in Thailand on Oct 15 surged nearly 100% above the daily average of 20-22 million, according to Wisesight.

Posts rose 17% day-over-day to 46.9 million on Oct 16, when police cracked down on demonstrators at Pathumwan intersection in central Bangkok. The volume of posts surged 59% to 74.5 million on Oct 17.

Mana Treelayapewat, vice-president for student affairs at the University of the Thai Chamber of Commerce, said fresh political movements are mainly driven by young people, mostly Gen Z, who are digital natives and commonly engage in the cyber world.

"Young protesters use social media for internal and public communication," Mr Mana said. They engage in Twitter and other new platforms and come up with unique and catchy slogans.

It is the first protest where two-way communication is used with strong engagement by participants, including voting what they want to do or sharing pictures and clips, he said.

They can call for rallies by the hour and use metro transport systems to reach protest sites, Mr Mana said.

Censorship measures used in the analogue world do not work online, as youngsters can switch to other platforms for communication, he added.

"The government needs to communicate with them like talking with their family members using logic," Mr Mana said. "Don't use power like the old-school way."

According to him, people usually consume data that fits their preferences while filtering or unfriending those who do not share the same opinions.

Society therefore needs to have mainstream media that work professionally and neutrally to help verify data with trusted sources before disseminating the information, he said.

Sarinee Achavanuntakul, a writer, academic and social critic, said that during the 2013 political crisis Facebook was used to exchange information about incidents. But in the 2020 demonstrations, youngsters rely heavily on Twitter to communicate.

"Online conversations come fast and flow with more real time on Twitter, where users follow up insight trends and guidance and exchange information, such as data and videos," Ms Sarinee said. "Facebook on the other hand is like a web board which needs to wait for replies."

Social media has become a crucial tool for decision-making and action, she said.

Nevertheless, social media also has a downside, such as misinformation and fake news, so users need to be conscious when receiving the information.

According to her, laws, norms, market and codes (technical constraints on activities) are four elements that create information balance on the internet.

"Thailand only uses one tool -- laws -- to suppress freedom," she said, adding that other elements, such as community-driven guidelines, can also be adopted.

Prinya Hom-Anek, a cybersecurity expert, said information operations (IO) in Thai politics have gathered pace for more than five years. IO is defined as an attempt to use information to change people's mindsets through various means, such as social media, printed media, activities, television and even underground movements, such as unidentified avatars on social media.

There are four stages of IO, he said. First, attempts will be made to separate or divide groups, such as young and old generations and progressive and conservative.

Second, efforts will be made to subvert the existing regime.

Third, attempts will be made to expand networks by reaching out and connecting to others who share the same opinions.

In the fourth stage, people who share the same ideology would understand they can reach the real truth and those with the different views are the ones who are manipulated.

"Thailand's situation is now in the fourth phase," Mr Prinya said, adding that the objective of IO is to intervene in internal affairs by changing people's mindset through frequent feeds of data, which could influence people's psychology and change people's behaviour, which can be self-radicalised.

Artificial intelligence (AI) on social media platforms also has the power to feed data that fits users' preferences so they can gain information that fits with their beliefs, he said.

To counter IO, there is a need to provide truth and facts in every aspect. "Today, most social media data only tells half-truths," Mr Prinya said.

According to him, it's time for Thailand to focus not only on cyber sovereignty but also cyber anarchy, as new media have become influential for members of the public.

The government needs to talk with social media giants, making them ward off fake news or misinformation, Mr Prinya said.

Thanachart Numnonda, a tech pioneer and executive director of IMC Institute, a tech training and research organisation, said users can be influenced by social media to contact some groups of people or trends they prefer, which leads to "social disunity".

Even if it is the same story, two groups of people can obtain different information, he said.

AI systems on social media platforms may choose to supply only one-sided information to users.

"In the real world, there is nothing totally good or bad," Mr Thanachart said. "Coins always have two sides, but AI would feed us only a one-sided story. People therefore have to be able to distinguish them." 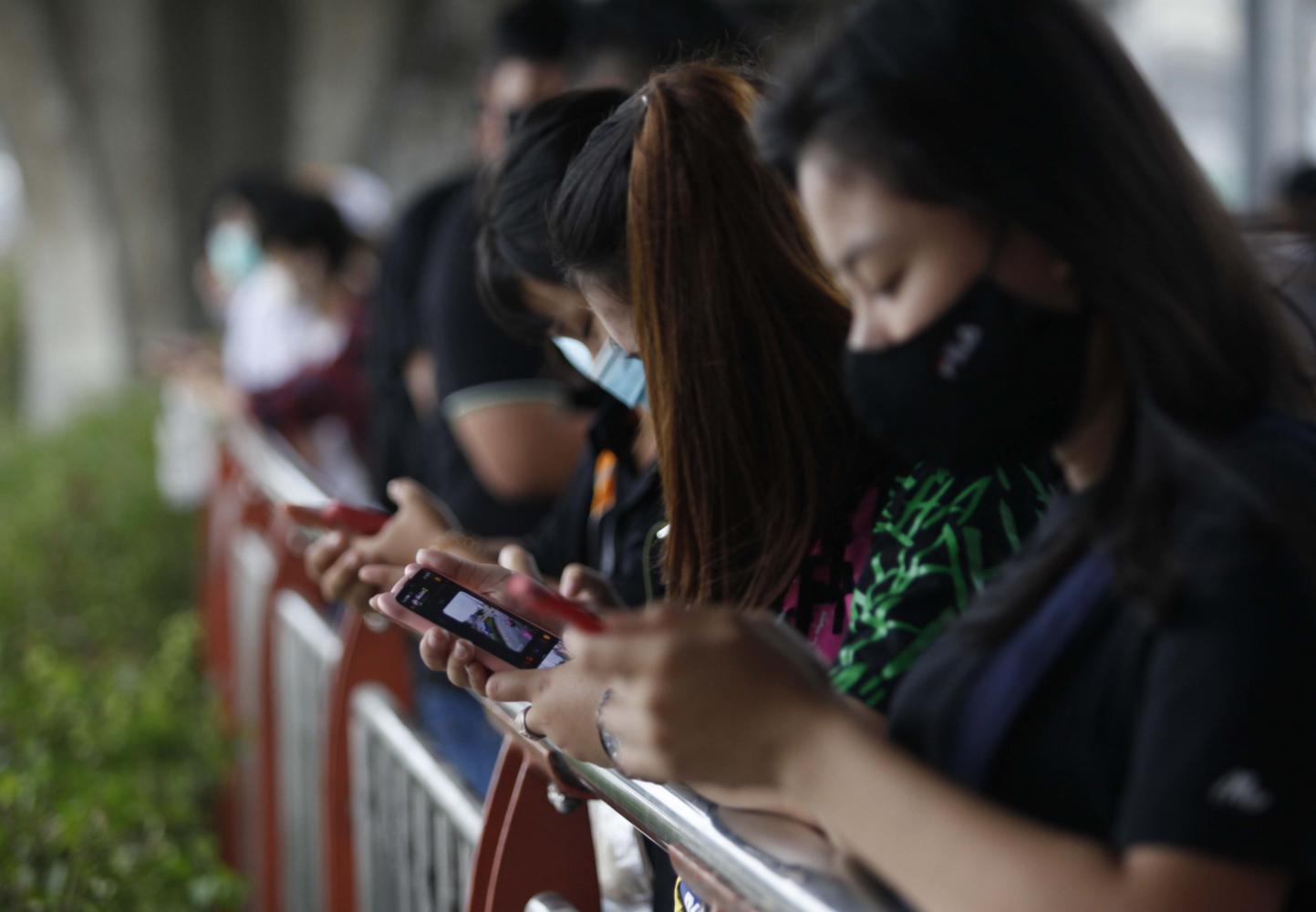 Acting in line with the emergency decree, police monitor content posted or shared online and inform the Digital Economy and Society (DES) Ministry to collect information on the posts they deem unlawful. The ministry will then submit the list of posts to the court to have them removed from the platforms.

The police recently took aim at the online content of news outlets Voice TV, the Standard, the Reporters and the political movements Free Youth and the United Front for Thammasat and Demonstration (UFTD).

On Oct 18, Free Youth and UFTD asked social media followers to move to Telegram after rumours that the government would seek Facebook's cooperation to shut their Facebook pages.

They also gave instructions on how users can deal with privacy and security settings in the app, including hiding their mobile phone numbers.

The DES Ministry set up a new centre on Oct 13 to monitor upcoming political rallies.

A high-ranking source at the ministry said 10 URLs on Voice TV's Facebook page and another two on Free Youth's page were deemed to have violated the emergency decree upon requests by the police on Oct 16.

The DES Ministry then sought a court order to remove these URLs. The court order was later issued.

Misunderstandings arose when media reports said the whole online platform of Voice TV, including its Facebook page, had to be shut, which is not the case, the source said.

"The DES Ministry was aware that only 12 URLs on the two platforms are deemed to have violated the emergency decree and that we have to seek a court order," the source said.

The court later revoked the order to shut the URLs upon Voice TV's appeal, citing the constitution in relation to media protection.

The source said the DES ministry will continue to monitor content deemed to violate the laws in line with its responsibility. The government will also monitor content in Telegram. It has no plan to shut access to the platform, as this would affect all users.

The source refused to reveal how officials monitor the content or chats on the platform.

DES Minister Buddhipongse Punnakanta said any decisions to shut protesting groups' pages have to be done in line with police and court orders.

If any unlawful content is found, police will notify the DES Ministry to collect information and a court order will be sought to shut them, he said.

"The government has no specific targets regardless of whether they are media," Mr Buddhipongse said.

The rise of blended learning