Tech giants including Amazon.com Inc. and Google reported strong quarterly sales and profits that showed how pandemic-era demand for their digital services and gadgets is driving them to new heights even in the midst of a debate about their market power.

The financial results announced Thursday, which also included record revenue at Facebook Inc., illustrated again how increased remote working and living has elevated use of everything from online retail and social media to cloud-computing services and digital advertising--accelerating shifts in consumer and business behavior that are expected to continue beyond the Covid-19 pandemic.

Amazon, which had delivered record sales in the second quarter of the year, topped that level in the three months through September, with revenue soaring 37% to a record $96.2 billion. Profit nearly tripled to $6.3 billion, propelled by strong online sales as well as digital advertising and growth in its lucrative cloud-computing arm.

"We're seeing more customers than ever shopping early for their holiday gifts, which is just one of the signs that this is going to be an unprecedented holiday season," Amazon Chief Executive Jeff Bezos said.

Google parent Alphabet Inc., one of the few big tech companies to have a lackluster performance in the second quarter of this year, said digital advertising revenue rose nearly 10% from a year earlier to $37.1 billion in the July-through-September period. That marked a turnaround from the prior quarter, when Alphabet recorded the first drop in the category in company history. 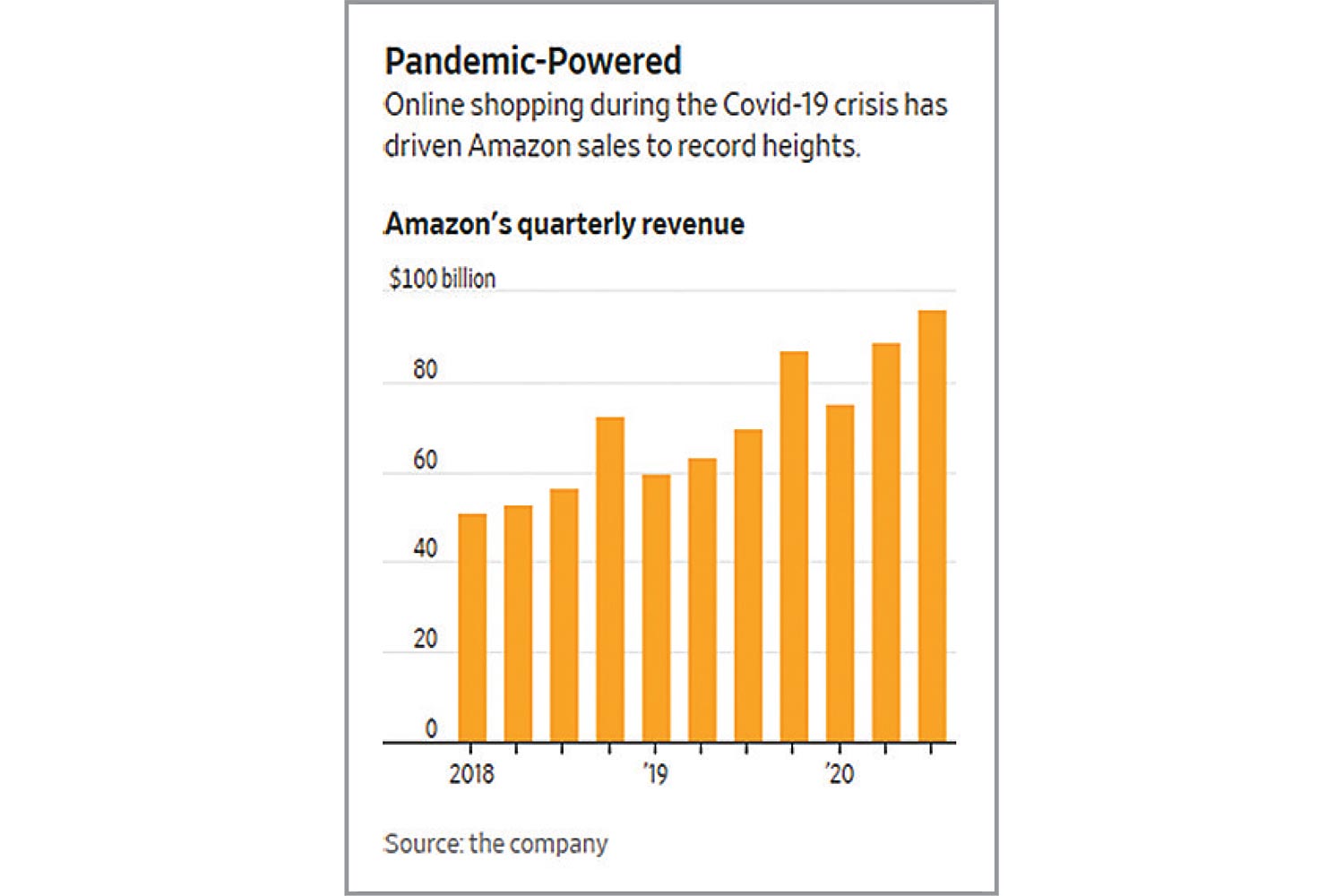 The industry's overall move from strength to strength, though, risks feeding the criticism of government officials, lawmakers and others who argue that the sector already has too much clout.

A day earlier, the chief executives of Facebook, Twitter and Alphabet were questioned in a nearly four-hour hearing by the Republican-controlled Senate Commerce Committee, focusing on the power of their platforms over public discourse. A week earlier, the U.S. Department of Justice filed an antitrust suit against Google alleging it operates an unfair monopoly in its flagship search business--the first charges to emerge from multiple investigations of the tech giants' competitive practices.

And earlier in the month, a Democratic-led House panel issued a report arguing that Amazon, Google, Facebook and Apple have leveraged their dominance to stifle competition and innovation. It said Congress should consider forcing the tech companies to separate their online platforms from other business lines.

Live Updates on Google, Amazon, Apple, Facebook and Twitter earnings The latest quarter's numbers weren't all rosy. Twitter Inc. disappointed investors with unexpectedly slow growth in its user base, even though it also topped estimates for sales and profit.

Apple Inc., the world's most valuable company, said sales rose 1% and profit slipped in the three months through September after it delayed the launch of its new flagship iPhone because of the pandemic--though Apple reported strong sales of laptops, iPads and smartwatches.

Together, the five biggest tech companies by value--Apple, Amazon, Alphabet, Facebook and Microsoft Corp., which reported Tuesday--took in 18% more revenue in the latest quarter than a year earlier.

Alphabet shares, which rose 3.1% in regular hours Thursday, jumped almost 7% after hours, as investors cheered its results. Amazon shares, up 1.5% ahead of the results Thursday, retreated around 1.9% in after-hours trading, even though sales and profit both beat analysts' estimates. Before the late-afternoon report, the stock was up more than 70% this year, giving the company a market value of around $1.6 trillion.

The scale of online shopping during the pandemic at times has strained Amazon, driving up staffing and costs to get goods to customers. The company said it would add 100,000 seasonal workers in the U.S. and Canada heading into the Thanksgiving and Christmas holidays ahead of an expected increase in online orders.

Amazon achieved its lofty sales figures without its annual Prime Day shopping event, typically held in July, which helps it enroll new Prime subscriptions. This year the event was delayed until October as Amazon worked through the summer's jump in orders.

Even so, customers have flocked to the Prime program, with renewal rates also rising, Chief Financial Officer Brian Olsavsky said on an analysts call. Customers are using more of the features the membership offers, including shopping and video, he said, adding the engagement level "we think that will have lasting value."

In a less positive sign of how the pandemic is changing shopping patterns, Amazon said its physical-stores segment, which includes Whole Foods, saw a 10% decrease in sales from a year earlier.

Amazon Web Services, the company's cloud-computing operation and its main profit center, posted $11.6 billion in sales in the quarter ended Sept. 30, rising 29% from a year earlier. Operating income for AWS, which rents computing power to companies and the government, rose 56% to $3.5 billion. Cloud services have been in hot demand during the work-from-home era as companies accelerate their adoption.

Amazon's burgeoning advertising business also grew sharply, with sales up 51% from a year earlier to $5.4 billion in the quarter. The unit sells advertising space in the form of sponsored products in search and display ads.

The company on Thursday forecast $112 billion to $121 billion in sales in the current quarter, bolstered by the delayed Prime Day event. That outlook comes with uncertainty, Mr. Olsavsky said. On top of the usual fourth-quarter vagaries regarding weather and holiday spending plans, this year also has a U.S. presidential election.

Sebastian Herrera contributed to this article.