The RCEP is a proposed free-trade agreement (FTA) between the 10 member states of Asean and six dialogue partners: China, Japan, South Korea, India, Australia and New Zealand. The deal will come into force when six Asean countries and three dialogue partners ratify the deal.

They agreed on the deal last year when Thailand held the Asean chair.

RCEP negotiations began in late 2012 at the 21st Asean Summit in Phnom Penh but last year India decided against joining the RCEP over unresolved issues, especially those concerning agricultural tariffs, which the government in New Delhi feared would harm its local producers.

Trade between its members was valued at US$10.4 trillion over the same period, or 28% of world trade.

"RCEP is the most progressive free-trade agreement initiated by Asean. It is set to enhance Asean's role in the region and strengthen its cooperation with its partners," Mr Jurin said.

He said the signing of the RCEP deal showed the participating countries' determination to support free trade and investments, create job opportunities and strengthen the region's supply and manufacturing chains. 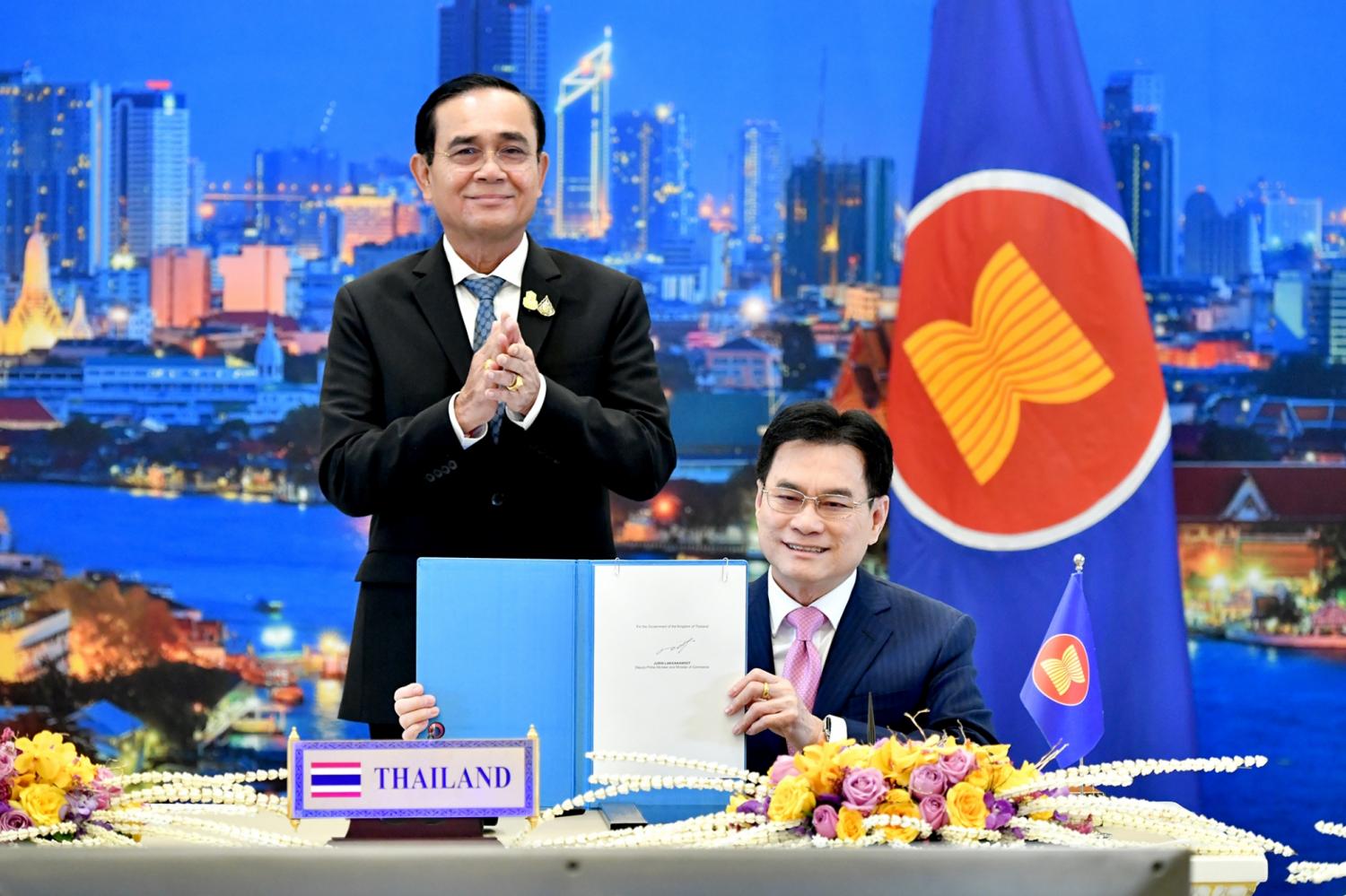 The deputy prime minister said the deal would also help the region recover from the economic impact of the Covid-19 pandemic. He added that the door remained open for India to join.

Meanwhile, Prime Minister Prayut Chan-o-cha praised the RCEP for not only being the largest free-trade agreement in the world, but also for the quality of the pact and its likely positive impact on the region's competitiveness and economic benefits, according to government spokesman Anucha Burapachaisri.

Once the agreement is in force, the prime minister believes it will create an attractive and conducive environment for businesses and investors around the world, Mr Anucha said. In turn, this would allow all members to have the capacity and resilience to manage future economic challenges, while helping them to recover from the impact of the ongoing pandemic, he added.

Some analysts have said the RCEP may put some US companies and multinational companies outside the zone at a disadvantage, particularly after President Donald Trump withdrew from talks on a separate Asia-Pacific trade deal formerly known as the Trans-Pacific Partnership (TPP).

Meanwhile, human rights groups voiced concerns over the RCEP agreement, saying it could hurt small-scale farmers, cause more land conflicts and leave poorer workers without protection as they struggle to deal with increased competition.

The Asean chairmanship was handed over to Brunei Darussalam at the conclusion of the 37th Asean Summit and related meetings.