Consumers are at the stall of a food vendor who participates in the government's co-payment scheme aimed at economic stimulation, in Bangkok this month. (Photo by Varuth Hirunyatheb)

Thailand's GDP contracted by 6.4% year-on-year in the third quarter, with full-year economic contraction projected to arrive at 6%, says the National Economic and Social Development Council (NESDC).

The economy was previously anticipated to contract by 7.5% this year.

The main reason supporting a lower full-year economic contraction is the NESDC projecting the global economy will contract by 3.5%, an improvement from 4.6%, while global trade is expected to decline 11% instead of 12% projected previously.

"A contraction of 6.4% in the third quarter was beyond expectations as the economy contracted by 12.1% in the second quarter."

After a seasonal adjustment, the economy expanded by 6.5% quarter-on-quarter from the second quarter. In the first nine months, the economy contracted by 6.7%.

The council's projection does not take into account the impact from political conflicts nor a second wave of outbreaks.

The NESDC's economic forecast for a full-year GDP contraction in 2020 is more optimistic than the Fiscal Policy Office's 7.7% contraction and the Bank of Thailand's 7.8% decline.

Full-year exports are projected to fall by 7.5%, according to the NESDC.

GDP shrank by 12.1% year-on-year in the second quarter, the biggest decline since the aftermath in 1998 of the 1997 Asian financial crisis. The first-quarter GDP contraction was 1.8% year-on-year.

Some economic indicators in the third quarter showed improvement from the second quarter, with government consumption and public investment expanding by 3.4% and 18.5%, respectively. 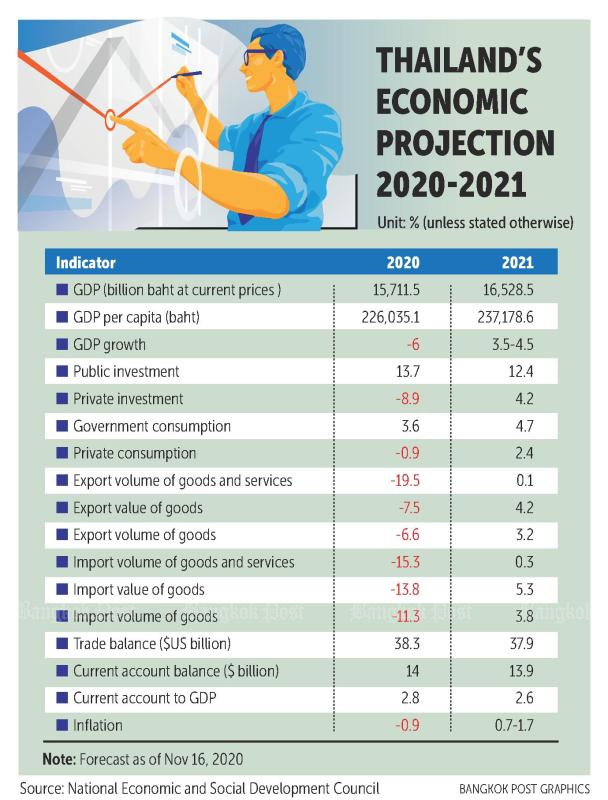 The improvement was attributed to the easing of lockdown measures and domestic travel restriction, coupled with measures to rehabilitate the economy through fiscal stimulus, resulting in the recovery of economic activities and domestic consumption, said Mr Danucha.

He said economic growth of the fourth quarter is expected to continue improving from the third quarter.

For 2021, the NESDC forecasts the economy will expand within a range of 3.5-4.5%, mainly supported by improvement in domestic demand, the global economic recovery and improved global trade.

Other factors supporting the positive outlook include the government's fiscal budget disbursement, economic stimulus measures and a low base from this year.

"Government investment will remain a core contributor to the economy next year, with a target of 98% disbursement of the fiscal 2021 budget," said Mr Danucha.

"The government will also implement measures to boost private investment next year."

Finance Minister Arkhom Termpittayapaisith said a lower contraction in private consumption and public investment growth in the third quarter suggested the economy is on a recovery path.

Fiscal stimulus measures are anticipated to shore up consumer spending this quarter, resulting in a multiplier effect across the economy, said Mr Arkhom.

If the tourism industry is allowed to reopen, the economy will have further support in 2021, with GDP expected to expand by 4% in that event, he said.