The company boosts its EV investment by more than a third to $27 billion over the next five years, aims to get some models to market sooner

A partially assembled 2017 Chevrolet Bolt EV is on the assembly line at GM's assembly plant in Orion. The company said it would spend $27 billion through 2025 to develop EVs and driverless vehicles.

General Motors Co. is raising its bet on electric cars by more than a third, as it hustles to convince a skeptical Wall Street that it too can be successful in the nascent market.

The nation's biggest auto maker by sales said Thursday it would spend $27 billion through 2025 to develop electric and driverless vehicles. That is up from a $20 billion figure that GM pegged in March, days before the Covid-19 pandemic forced the industry to shut its North American factories and touched off an industrywide cash crisis.

Electric vehicles today account for only about 2% of global sales for GM and the broader industry. But with governments from Beijing to California seeking to clamp down on tailpipe emissions--along with the spectacular rise in valuations for green-car companies such as Tesla Inc.--traditional auto makers are racing for an inside edge in what investors see as the auto sector's next big growth opportunity.

"We want to lead in this space," GM product-development chief Doug Parks said during a media briefing. "Tesla's got a good jump, and they've done great things. There's a lot of startups, and everyone else invading the space."

Speaking at a Barclays investor conference Thursday, GM Chief Executive Mary Barra said the company has the scale in areas like manufacturing and sales to eventually overtake Tesla as the leader in electric-vehicle sales in North America.

But so far, GM and other legacy auto makers have been largely ignored amid a frenzy of electric-vehicle investment.

Tesla's shares have leapt roughly sixfold this year as investors cheer its sales growth in China and budding revenue growth from selling connected-car services. Little-known Chinese startup Nio Inc.--which in April needed a roughly $1 billion infusion from Chinese state investors amid mounting losses--has seen its valuation rocket to about $65 billion in recent months, just beyond that of GM.

Meanwhile, many green-energy vehicle startups have had stellar debuts after being taken public this year through blank-check companies, including Hyliion Inc. and Fisker Inc.

GM shares have more than doubled since cratering in March during the factory shutdowns, but its stock price, along with many other auto companies, has lagged behind the broader market for years, even as electric-vehicle newcomers have seen shares jump.

Analysts have lauded GM's technology and commitment to growing its plug-in-car business. But, they say investors are more enticed by pure-play electric vehicle companies that come without the lower-margin, capital-intensive aspects of traditional car companies, including vast factory footprints and unionized workforces.

Some analysts have suggested GM spin off its electric-vehicle business to boost the share price. Ms. Barra has said she is open to changes in GM's capital structure that would reward shareholders, but wouldn't make a move simply to get a short-term pop in valuation.

"We've developed these assets and capabilities over decades. They are real, competitive, innovative strengths that startups will struggle to match," Ms. Barra said.

She said GM has the scale in areas like manufacturing and sales to eventually overtake Tesla as the leader in electric-vehicle sales in North America.

"We've developed these assets and capabilities over decades. They are real, competitive, innovative strengths that startups will struggle to match," Ms. Barra said.

Tighter regulations on tailpipe emissions in Europe and China also are pressuring auto makers to offer greener vehicle lineups. The European Union's stricter rules on carbon-dioxide emissions have many auto makers there facing the prospect of paying billions of dollars in fines. Some states and countries have imposed future bans on gas- and diesel-powered vehicles, including the 2035 deadline recently set by California. 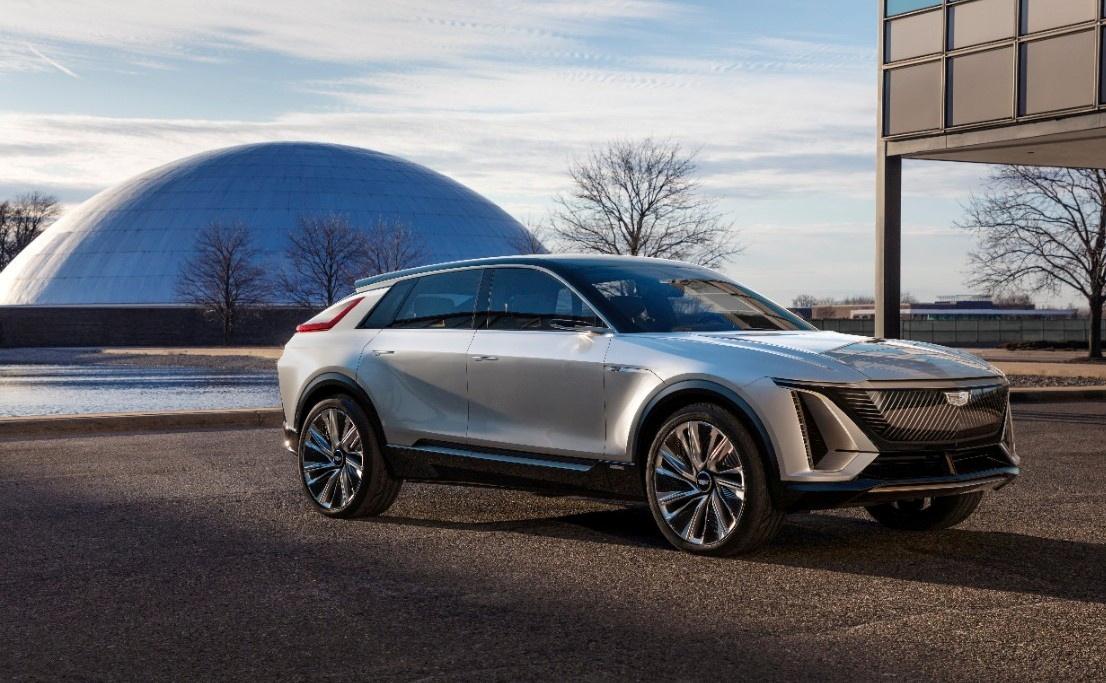 The new Cadillac Lyriq, an electric SUV that GM plans to put in showrooms by early 2022.

Investors are paying especially close attention to auto makers' capital-spending plans for signs of substantial bets on future technologies that could drive growth. This week, analysts at UBS said they favored GM shares over Ford Motor Co.'s, in part because Ford isn't spending as much as its rival on electric-vehicle development.

"An 'all-in' EV strategy is a prerequisite to avoid a further de-rating of shares," UBS analyst Patrick Hummel wrote in a research note.

A Ford spokesman pointed to past statements from Chief Executive Jim Farley, who is focusing on electric versions of vehicles that commercial customers use in their businesses, including a battery-powered Transit cargo van Ford revealed last week. Ford has said it is spending $11.5 billion on electric vehicles over a five-year period ending in 2022.

"We expect demand for capable, productive and affordable electric commercial vehicles, for example, to be massive," the spokesman said.

Volkswagen AG, which is making among the industry's largest investments in electric cars, this week said it would increase its spending to about $41 billion through mid-decade, 6% higher than an earlier target. The German auto giant said about half of its overall capital spending during that period will go toward future technologies, which include electric cars, more-advanced factories and self-driving vehicles.

Electric vehicles underpin Ms. Barra's growth strategy. During her seven-year tenure, she has pulled GM out of Europe and many other international markets, redirecting capital toward electric and driverless cars and other technologies.

GM's new spending target represents more than half of its planned capital expenditures through mid-decade. Electric vehicles generally have been money losers for car companies because of their high battery costs, although GM has said its next generation of electric vehicles will be profitable.

The auto maker projected Thursday that the cost of the battery pack for its plug-in vehicles in 2025 will be about 60% lower than the one used in its lone U.S. electric car today, the Chevrolet Bolt. Mr. Parks also said GM is working to get some electric models to market earlier than initially planned, including a Cadillac SUV, the Lyriq, which will hit showrooms by early 2022, nine months ahead of schedule, Mr. Parks said.

GM said 40% of the vehicles it will sell in the U.S. by mid-decade will be fully electric. Early entries will be expensive--including a Hummer pickup truck that will be priced around $113,000 when it goes on sale late next year--but GM plans to add more-affordable models over time, including some that will sell in the low-$30,000 range, Mr. Parks said.

KANCHANABURI: The Department of National Parks, Wildlife and Plant Conservation on Thursday filed charges against the owner of an illegal 40 million baht resort in Sangkhla Buri district.