People wearing face masks, walk near a shopping complex after lockdown in Wuhan, the epicentre of China's novel coronavirus outbreak, is lifted on April 9, 2020. (Reuters photo)

Global communities will mark the first anniversary of the coronavirus next month after China identified the virus for the first time as a “pneumonia of unknown cause” when it was discovered in Wuhan, central Hubei province on Dec 30, 2019. 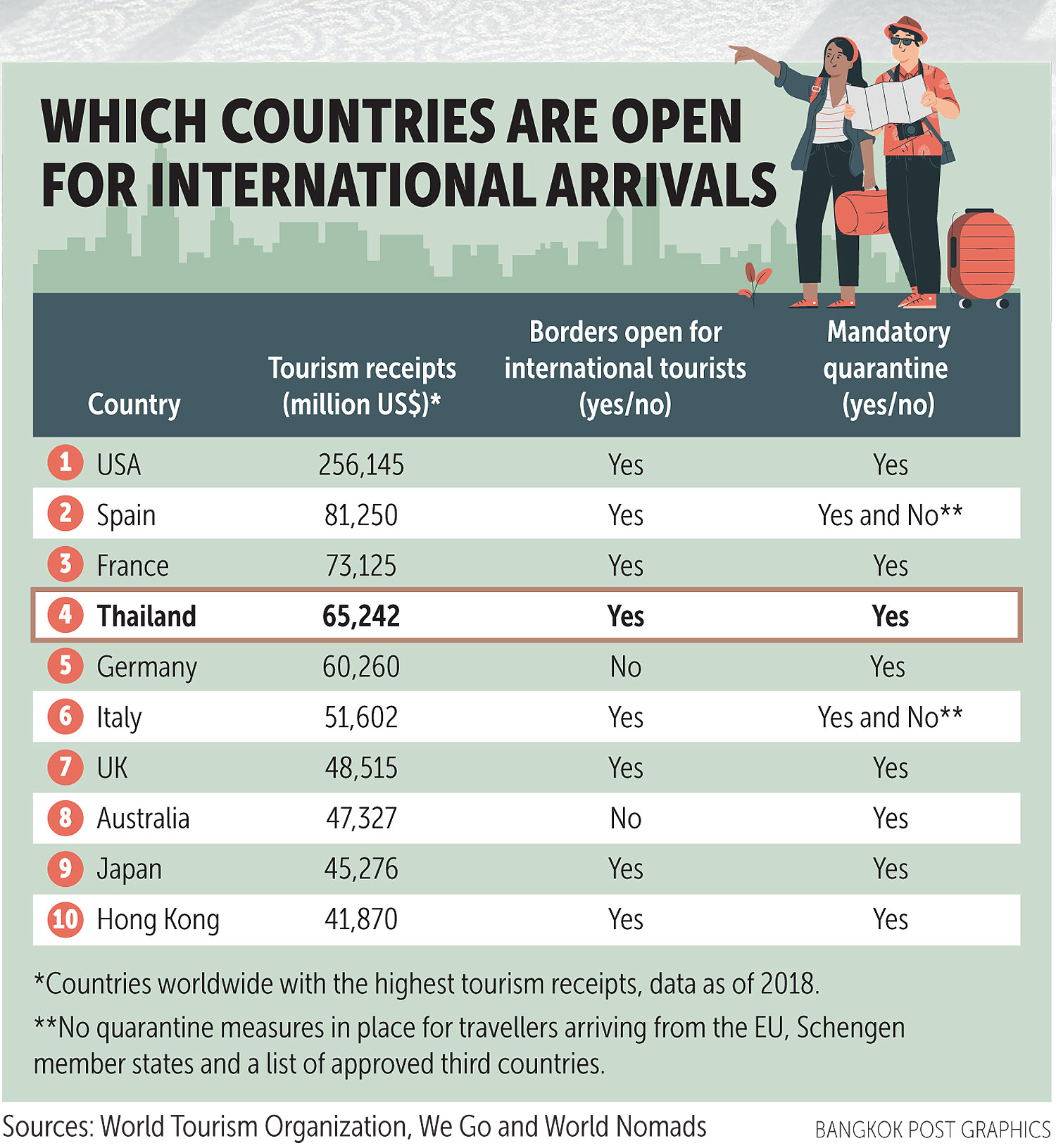 The novel coronavirus or Covid-19 has unleashed massive devastation on most industries globally, with tourism bearing the brunt of the pandemic, as every country struggles to revive travel without triggering a fresh round of the contagion.

The terms “travel bubbles” or quarantine-free travel have emerged since early this year when countries had to seal their borders to foreign visitors.

Travel bubbles have not taken shape in many places as the spread of the deadly virus has sabotaged this strategy. This includes Thailand, where tourism revenue accounts for around 20% of GDP.

The lockdown policy is not the only factor hindering long-delayed negotiations of travel bubbles between countries.

Some countries, particularly those that have a substantial domestic market to rely on, are reluctant to allow their citizens to travel abroad over fears they could bring the disease back home.

These countries worry this could destabilise the domestic tourism market if people start travelling outbound.

China, the biggest outbound market recording around 170 million trips in 2019, is not recommending its citizens travel overseas for the time being.

The Chinese government imposed an international travel ban on group tours in late January and recently extended this order throughout the cool season, believed to be the peak season for spreading the virus.

Many officials from the Chinese government reportedly gave the same stern warning regarding strict virus prevention in recent months.

Luo Zhaohui, China's vice-minister of foreign affairs, was quoted saying this is not the right time to create travel bubbles with less affected countries, although he did not rule out such a possibility in the future.

“Sometimes the question should not be when will Thailand be ready to reopen, but rather when will other countries allow their people to venture out,” said Phiphat Ratchakitprakarn, Thailand’s tourism and sports minister.

The minister acknowledged there is pent-up demand among Thais who want to take outbound trips to lower-risk areas, something Thailand should carefully consider.

He said travel bubbles are hard to implement if there is not unanimous public consent for the scheme.

“Even if seven out of 10 people are ready to take the risk, those three voices against the idea are strong enough to delay the travel bubble plan further,” said Mr Phiphat.

Under the current regulations, Thai citizens returning from foreign countries are required to undergo a mandatory 14-day quarantine, making travel for much of this year undesirable.

The quarantine rule will be in place as long as concerns abound about the virus, unless Thailand can successfully create travel bubbles with partner countries, said Mr Phiphat.

While the tourism minister said Thailand still wants to have talks about travel bubbles with low-risk countries, any bubble would happen in the future, not the near term.

Setting up arrangements to facilitate travel without quarantine for travellers between low-risk countries is vital for the industry, said Patrick Basset, chief operating officer of Accor for Upper Southeast and Northeast Asia and the Maldives.

But the government needs to balance public opinion versus business impact and rising unemployment.

He said public confidence remains a challenge because not everybody understands the risks involved in reopening to tourists are minimal if the right protocols are in place.

Vichit Prakobgosol, president of the Association of Thai Travel Agents, said Thailand stands a chance to implement successful travel bubbles because of its strong relationship with China and its ability to control the pandemic.

Yet he acknowledged setting up a travel bubble scheme with China is not easy.

Mr Vichit encouraged Thailand to show a sincere intention to reopen its borders to China. Both state agencies and the private sector have to repeat this message.

Beijing announced a travel warning for Thailand after the 2015 bombing at the Erawan shrine at the Ratchaprasong intersection.

The Thai government and the private sector sent condolence letters and sought meetings with the Chinese embassy five years ago to seek a relaxation on the travel warning.

“At this moment, Chinese travel agents stand ready to send travellers to Thailand, once the government allows citizens to travel abroad,” he said.

“Chinese outbound tourists are eager to head out after a year of tight travel restrictions.”

The government needs to communicate that travel bubbles will be conducted in the safest manner to gain the confidence of both Thai and international travellers, said Mr Thirayuth.

He said the short-haul market, including a travel bubble between Thailand and China, is expected to help tourism recover.

Set to begin on Nov 22, Hong Kong and Singapore established a travel bubble scheme, starting with one flight a day into each city, with a quota of 200 travellers per flight.

This will be increased to two flights a day into each city from Dec 7.

If the infection rate worsens in either city, the travel bubble will be suspended.

Unlike Thailand and China, Singapore and Hong Kong have limited domestic tourism markets with a small population and limited space.

Most of the aircraft in both cities have been grounded for months as neither has domestic routes to serve.

They are the first pair in the region to start a travel bubble, considered a model for this concept, so the world is keeping a close watch.

Chotechuang Soorangura, vice-president of the Association of Domestic Travel, said people will get used to the virus and learn to live with it eventually.

The travel bubble between Singapore and Hong Kong brings hope for tourists who wish to see experimentation with safe mechanisms for international travel after being penned in for so long, said Mr Chotechuang.

“As soon as there are secure paths for outbound trips and people are confident with those methods, international travel will return,” he said. “We have experienced this behavioural pattern before in the post-lockdown period when people craved fresh air and could not wait to hit the road again.”

Mr Chotechuang said major tourism destinations for Thais will see an influx of tourists whenever travel bubbles are created or an effective vaccine can be distributed.

He predicts when travel corridors open again, prices will be more attractive as operators, particularly airlines, have to drain their slots that were reserved because mass cancellations took place in the early stages of the outbreak.

“Wholesalers now hold a large number of allotments. They have leftover credit with airlines that cannot be used as the pandemic cancelled all trips and prevented people from travelling for almost a year,” said Mr Chotechuang.

“Whenever outbound tourism restarts, those agencies will offer super low-price packages hoping to cash in.”

Outbound demand in the early stages may be slow, but if the first groups come back safely without infection, the market should heat up, he said.

Supant Mongkolsuthree, chairman of the Federation of Thai Industries (FTI), agrees with the push for travel bubbles as tourism is an economic tool that promises quick results.

The country should not depend on a set of economic measures. It needs to find new remedies that will help cure financial ills, said Mr Supant.

If the authorities want to go ahead with travel bubbles to draw more foreign tourists, the private sector is ready to support and work with the government, he said.

These countries can better cope with the spread of the pandemic than some European countries and the US, he said.

Japan and China should be two candidates on the travel bubble list. Mr Supant believes they would be interested because their citizens like to travel to Thailand.

If the government picks China, it may start by selecting provinces that have proved successful in curbing viral transmissions.

However, the government must consider even if it grants entry to foreign tourists from low-risk areas, Thailand still risks importing Covid-19 into the country, he said.

Travel bubbles must have effective screening of travellers and strict measures to control the virus, said Mr Supant.

“As tourism is a key mechanism driving the economy, we cannot let it collapse,” he said.

Mr Supant previously said the FTI supports a proposal from the Public Health Ministry to reduce the mandatory quarantine period for foreign tourists from 14 to 10 days, provided it only applies to visitors from countries with low risk of transmission.

The FTI chairman said the authorities may consider a further cut, trimming the quarantine period to less than 10 days for foreign business travellers.