Sonika Manandhar remembers riding in her father’s minibus in her hometown of Kathmandu when she was five years old. Thanks to a loan programme from the government, her father was able to buy the bus and earn a living to support his family and send her to school until she earned a computer engineering degree.

Twenty-five years on, Ms Manandhar is the co-founder of Aeloi Technologies, a Nepal-based fintech platform and a green entrepreneur who is finding innovative ways to help a new generation of minibus drivers.

Aeloi’s aim is to bridge the financial gaps between small and medium enterprises (SMEs) and funders (such as development partners, carbon offset providers and foundations), local microfinance institutions, micro entrepreneurs, and goods and services vendors.

“We believe that SMEs are essential for growing the economy in the region,” said Ms Manandhar. “The informal sector should be allowed to access financial loans and given financial opportunities to grow as we did.”

In 1995, the capital of Nepal became a pioneering green city by rolling out a fleet of 700 electric three-wheelers, almost all of them driven and operated by female micro-entrepreneurs. The safa tempos, as they were known, could carry 12 people each and constituted what was then the largest fleet of battery-powered public transport vehicles in the world. They helped reduce greenhouse gas emissions by thousands of kilogrammes a day, but drivers and operators have always faced an uphill struggle.

A combination of factors — from high battery replacement costs to the influence of the city’s “diesel mafia” — led some drivers to abandon their safa tempos for conventional vehicles. But hundreds of women have persevered to keep the fleet on the roads despite the challenges.

Yet, Kathmandu still suffers from air pollution five times higher than the safe level. Nepal imported US$1.85 billion worth of diesel fuel in 2018-19 despite having up to 4,300 megawatts of hydropower potential.

Ms Manandhar wanted to learn more about why some electric minibus drivers had given up. She found one of their biggest difficulties was replacing expensive batteries without a loan, which reflected the lack of trust that the mainstream financial sector had in small-scale entrepreneurs.

She aimed to find a way to make the electric minibus business in Kathmandu something that prospective funders could support, by offering them a way to track performance. She applied her computer skills to develop digital tokens that track the climate and social impact of the buses on a real-time basis.

The digital tokens are a flexible form of shop credits usable only at pre-approved vendors, similar to e-vouchers. In a country where many low-income people are still using 2G phones, the tokens are deployed on a plain SMS platform that does not require a smartphone or mobile data.

The fintech firm also plans to reach out to as many as 1,000 female micro entrepreneurs in Kathmandu to help them obtain access to finance while helping reduce greenhouse gas emissions, she said.

Financial technology companies, like Aeloi, are examples of how small enterprises and young entrepreneurs in Asia Pacific can scale up innovations to help address issues facing their local communities.

In the case of Aeloi, said Ms Manandhar, its goal is to lessen economic inequality, strengthen women’s empowerment and tackle climate change.

“(We have) traceable impact so they can make the region more resilient to climate change, apart from being able to afford to provide for their families,” she told the UN75 commemoration forum held recently in Bangkok to mark the 75th anniversary of the founding of the United Nations.

The forum brought together fresh perspectives from stakeholders in the region who reflected on the work of the UN over the past 75 years. They also discussed opportunities to apply some of the innovations and technologies that have come to the fore during the Covid-19 pandemic to help the region achieve the SDGs by 2030 as targeted and to build a better future. 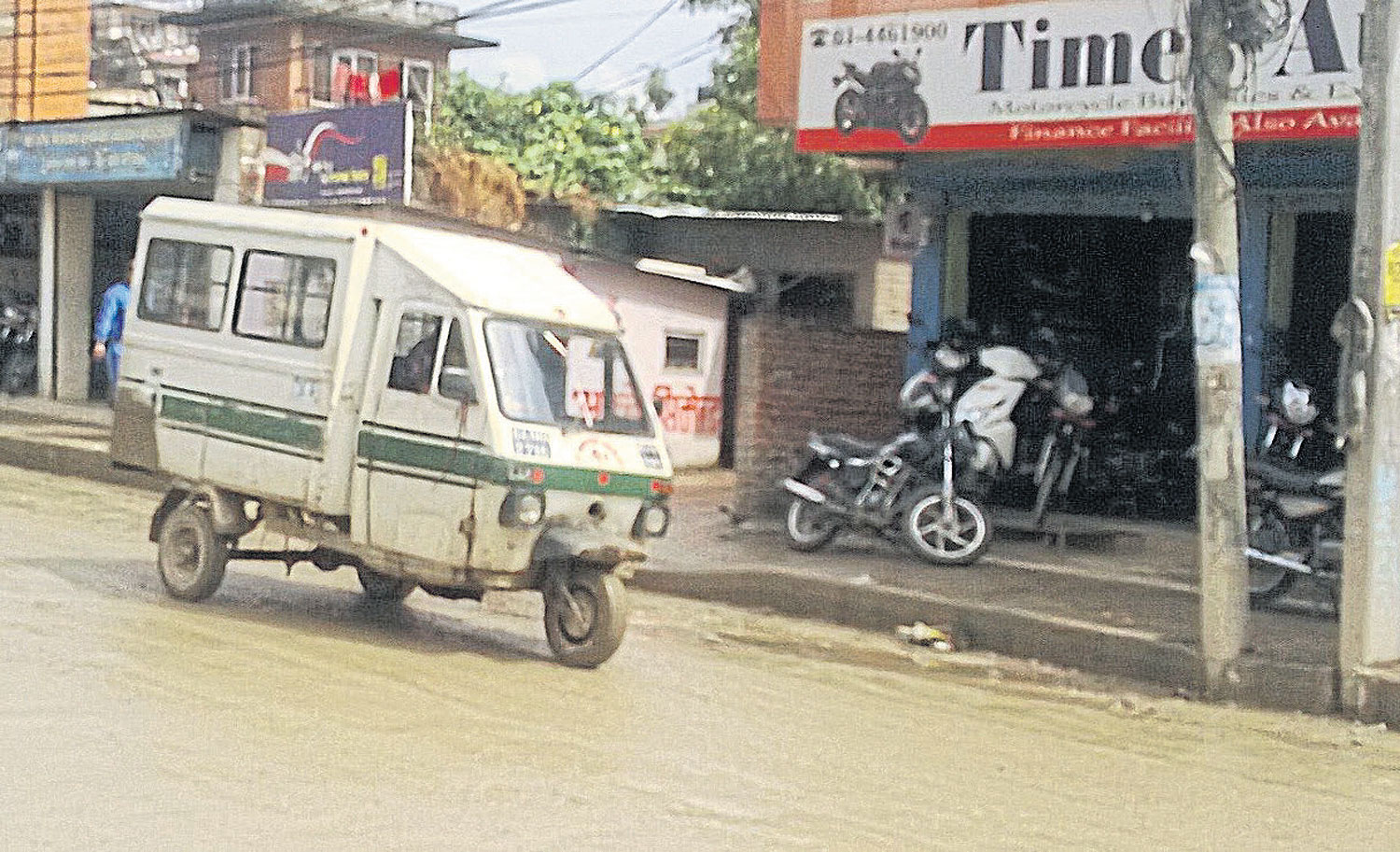 times of struggle can become an opportunity for positive change and transformation, notably through the SDGs.

At the form, Ms Manandhar was accompanied by another female entrepreneur, Asel Kubanychbekova. Born and raised in Kyrgyzstan, she founded the Women’s Entrepreneurship Development Fund because she is passionate about promoting economic opportunities for girls and women to build partnerships.

The organisation, she said, helped the government to develop an entrepreneurship programme for Kyrgyz women and girls who had lost their jobs during the Covid crisis, so they could access e-markets and continue making a living to support their families.

Don Pramudwinai, Thailand’s Minister of Foreign Affairs, told the gathering that 2020 had been particularly challenging for the UN. In the era of disruption, multilateralism is under threat, compounded by the pandemic and accelerating climate change.

“The world needs a strong UN to deliver creative ‘new normal’ solutions,” Mr Don said. “We can build on our past achievements and go through challenges together. Joint effort to build back better is needed so that no one will be left behind.”

In Asia Pacific, science, technology and innovation will play a key role in post-Covid recovery plans. Collaboration is needed to ensure that scientific advancement and resource mobilisation, especially on vaccine development, can be accessed by all groups.

Social innovation can also be integrated into practice, following the guidance of the sufficiency economy philosophy espoused by the late King Bhumibol Adulyadej, he added.

Gita Sabharwal, the UN resident coordinator in Thailand, said Thailand had shown remarkable resilience and demonstrated how to solve the Covid crisis, thanks to a combination of government action, social responsibility and community solidarity.

“It’s all about collective survival and equality,” said Ms Sabharwal. “However, much more needs to be done. Human rights, better access to education and environmental management are among the priorities.” 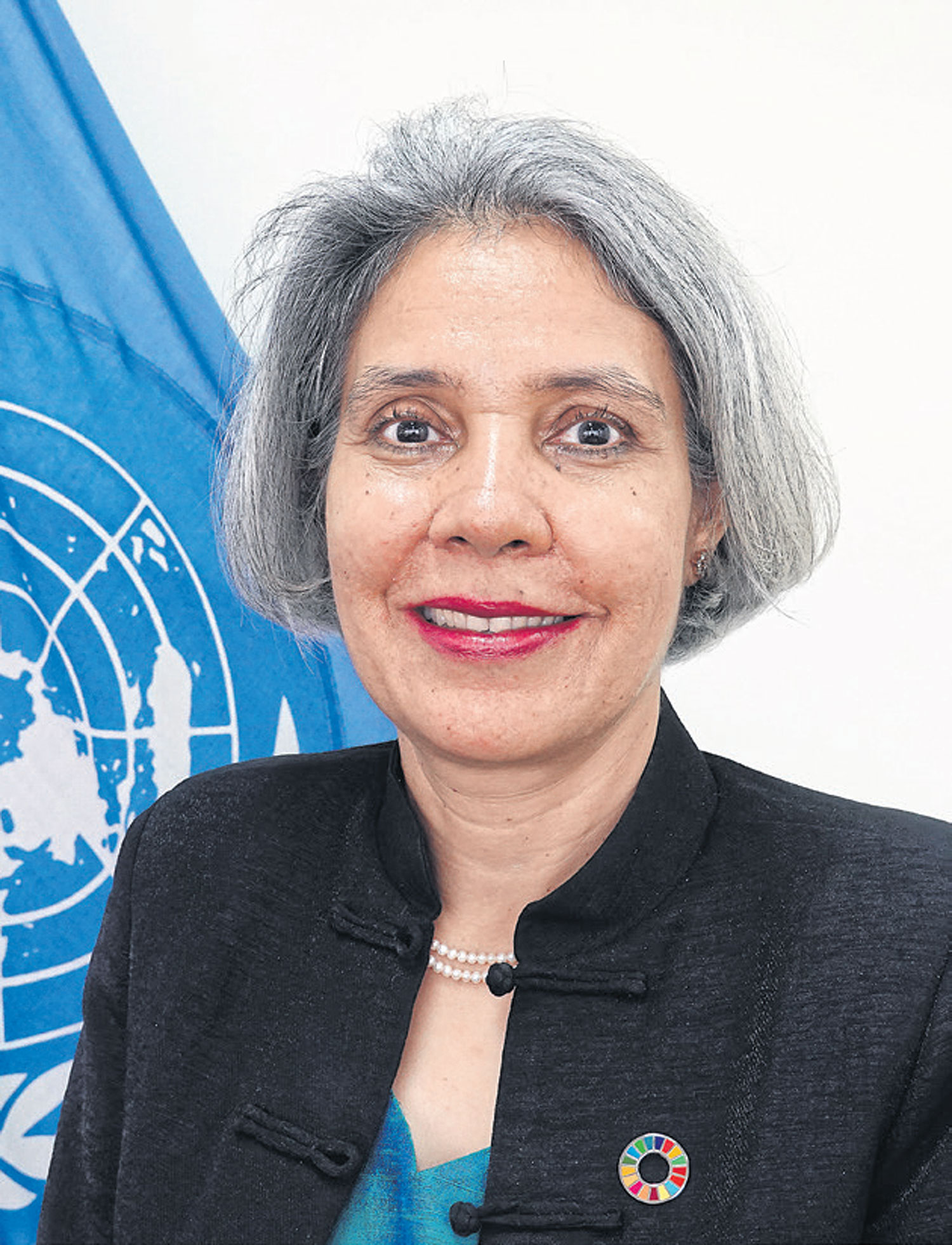 “Human rights, better access to education and environmental management are among the priorities” for the UN, says Gita Sabharwal, UN Resident Coordinator in Thailand.

In Thailand, transforming the lives of smallholder famers is one way to help the country move forward economically.

An estimated 7.94 million households in Thailand rely on the agricultural sector, which employs 12.7 million people or one-third of the total workforce. Revenue from agricultural and food exports is 8.5 trillion baht a year.

However, the pandemic has had a severe impact on food systems and food security, with three-quarters of Thai farmers affected by the crisis, according to the latest assessment by the UN Food and Agriculture Organization (FAO).

The overall pandemic-related income loss reported by farm household respondents is almost 40%, the FAO said. Half of the respondents who are in the non-agricultural sector also have financial problems and many cannot pay their debts.

Aware of the difficulties smallholder farmers experienced, two young Asian graduates of the Massachusetts Institute of Technology (MIT) set out to find solutions. Usman Javid of Pakistan and Aukrit Unahalekhaka of Thailand met at an MIT entrepreneurship class, where they found that had similar ideas for helping farmers.

They founded Ricult in late 2015, initially in Pakistan, and Mr Aukrit set up Ricult Thailand a year later. The data solution provider helps farmers access affordable loans and technologies to lift them out of poverty.

Farmers can download a free mobile application providing agricultural advice in local languages, on such essentials as the right time to grow crops and fertilise soil to improve income and profit. The app has since branched out into financial services.

Mr Aukrit, now 30, explained that it took four years of trial and error before the social enterprise was in a position to work with crop insurance providers and banks to come up with a financial inclusion approach. Banks can now use data analytics to guide decision-making when considering loans. Crop insurers have access to data that can help them more efficiently underwrite risk among smallholder farmers.

Ricult now serves more than 300,000 smallholder farmers in Thailand and Pakistan. The social enterprise also plans to work with financial and crop insurance partners to deploy technology and scale up social innovation to help farmers further, he said.

“How we can ensure scalability in terms of accessible impact is key,” said Mr Aukrit. “Social innovation takes time. Ricult took four years to find ways to scale up and help farmers. A lot of partnerships and financial support are required.” 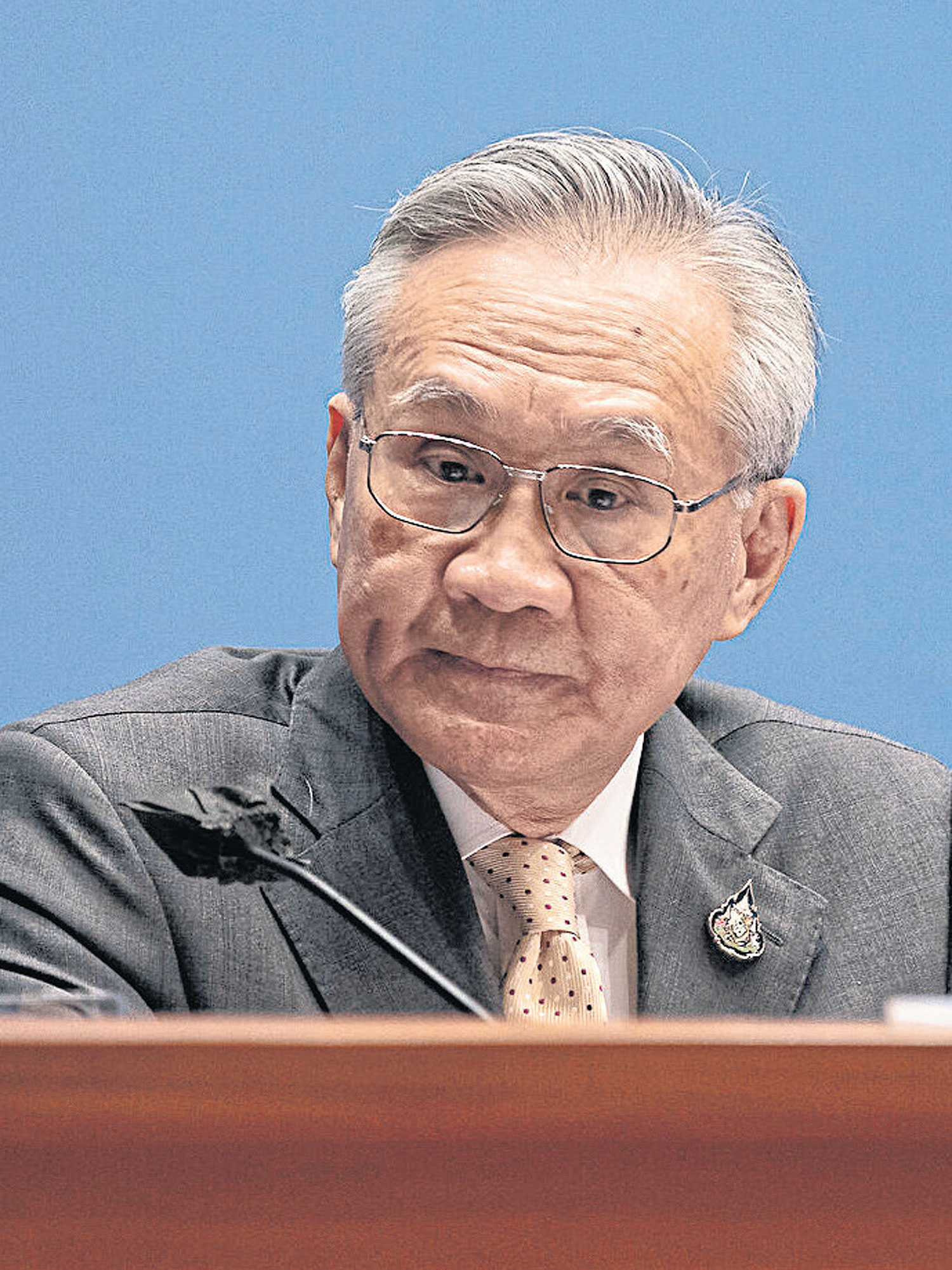 Up to 200 million tonnes of plastic and waste are released into the oceans globally, killing 100,000 sea mammals. Realising the harm that was being done, Sagufta Janif founded The Fusion Hub to provide a solution to the growing waste problem in her home country of Fiji.

Based in Suva, the capital of the South Pacific island nation, the social enterprise promotes sustainable living through upcycling and recycling waste materials into furniture and home décor, under the slogan “Think Outside the Trash”. As well, it contributes to the economic empowerment of women, some of them single mothers.

The Fusion Hub was born out of Ms Janif’s desire to provide a solution to Fiji’s growing waste problem, create a sustainable Fiji and contribute to the economic empowerment of Fijian women.

“The best way to address the solution is raise awareness and recognition among the young,” she said. “Leaders should work with us to build capacity. Education also needs to be overhauled to make SDG5: Gender Equality, and SDG1: No Poverty, more sustainable.” 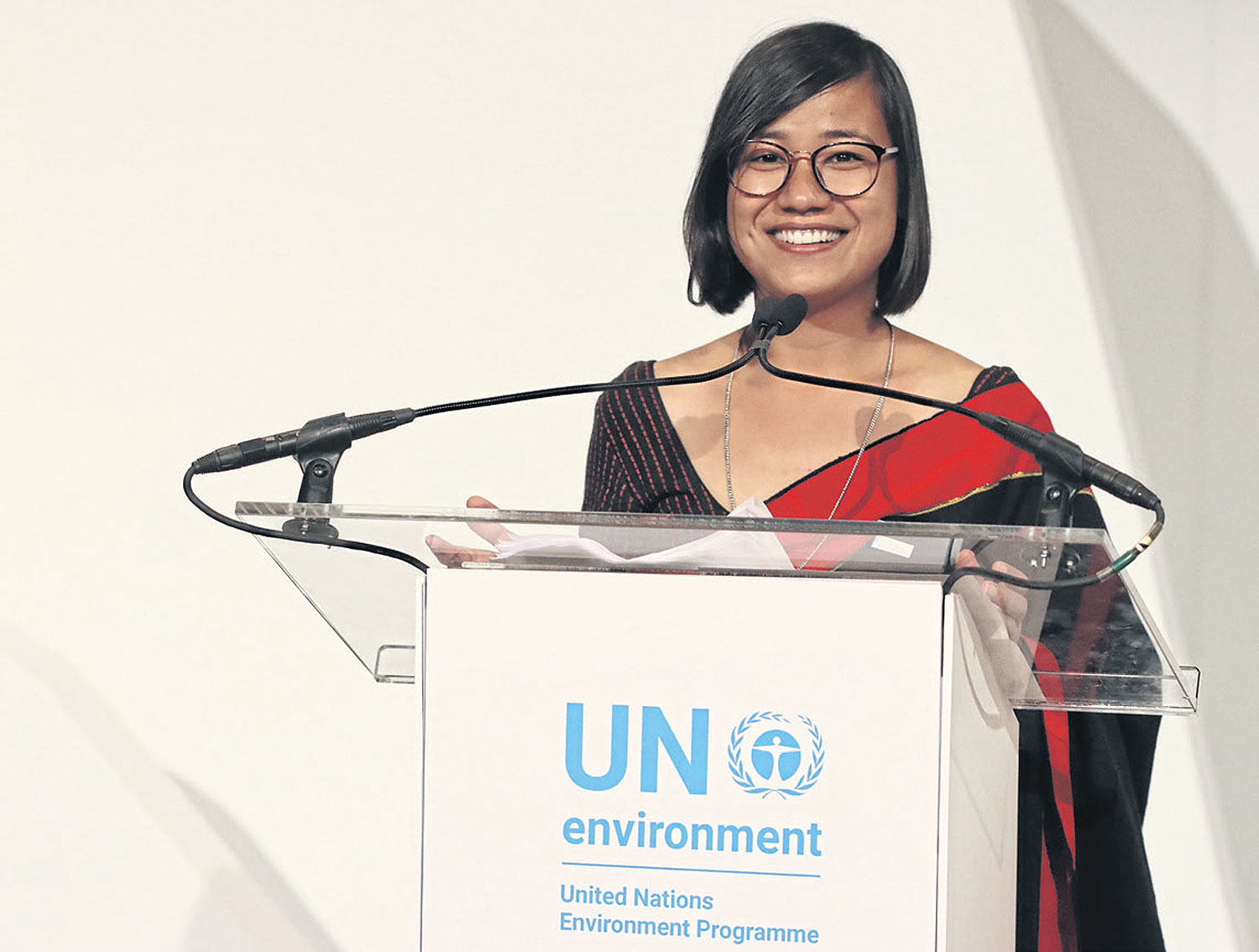 Sonika Manandhar of Nepal accepts her Champions of the Earth award from the UN Environment Programme in October this year.

China, the world’s largest carbon emitter, is among the biggest consumers of cooking oil globally, generating millions of tonnes of waste oil every year.

Although it is illegal, some entrepreneurs filter the waste oil from restaurant fryers, sewer drains, grease traps and other sources, then sell it to street vendors and small restaurants for re-use.

Shutong Liu founded his company, MotionECO, to offer a better way to use recycled cooking oil and also combat food safety and health problems. It is the driving force behind a supply chain that collects and turn cooking oil waste from restaurants into renewable energy for trucks, fleet and fuel replacement.

Last year, MotionECO was awarded a grant of $10,000 from UN Environment to promote sustainable lifestyles in China and beyond, as winner of the Asia Pacific Low Carbon Lifestyles Challenge in the Mobility category.

So far, Mr Liu has collected about 1,000 tonnes of waste oil from restaurants in Shanghai, Nanjing and Chengdu for turning into renewable energy that can help reduce greenhouse gas emissions. In Nanjing alone, MotionEco aims to provide as much as 50,000 litres of green fuel this year, reducing CO2 emissions of the city’s diesel engine fleet by as much as 125,000 kilogrammes.

Other countries including Thailand can replicate this solution for practical use, in his view. “Biofuel can be an alternative fuel source. It’s greener, cleaner and saves the planet,” Mr Liu said. MotionEco has built a supply chain for recycling used cooking oil, and aims to provide as much as 50,000 litres of green fuel this year to Nanjing, China. Photo courtesy of MotionEco