The Dollar Is Weak. Investors Bet It Will Slide Even More.
Business

Forecasts assume Covid-19 recedes, encouraging investors to step back from the relative safety of U.S. assets

The ICE U.S. Dollar Index, which measures the dollar against currencies from major trading partners, recently slid to its lowest level since 2018.

The dollar hit its lowest levels against a basket of currencies in more than two years this week--and investors think it'll fall further.

The consensus view of a falling dollar is based on a big assumption: Covid-19 will be more or less conquered in the months ahead. Vaccines will allow economies around the world to return to normal within the next year, encouraging investors to step back from the relative safety of U.S. assets and invest in stocks, bonds and currencies outside the U.S.

The dollar hit its lowest levels against a basket of currencies in more than two years this week. Investors and analysts think it has further to fall. The only questions seem to be how much and how fast.

The slide in the dollar coincides with exuberance in the U.S. stock market, where the Dow Jones Industrial Average pierced 30000 for the first time on Tuesday before retreating Wednesday. A weak dollar can help stocks with big overseas operations since it makes earnings in foreign currencies worth more in dollar terms.

The ICE U.S. Dollar Index, which measures the dollar against a basket of currencies from major trading partners such as Japan and the eurozone, slid below 92 this week, its lowest level since 2018, according to FactSet. It is down more than 10.5% since its March peak. 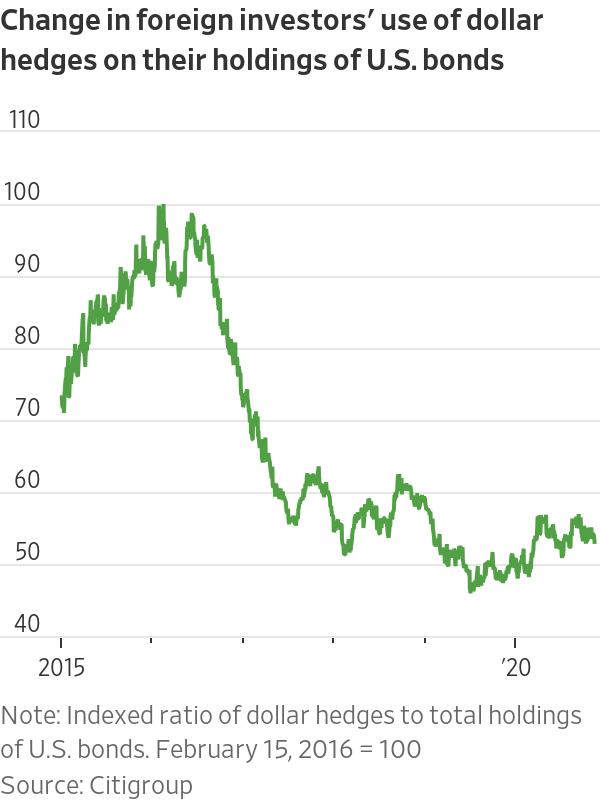 A commentary from market strategists at Citigroup recently predicted the dollar could see an additional 20% drop in 2021, as foreign investors move to protect themselves from currency fluctuations in their existing U.S. holdings.

Other forecasts for the dollar vary but mainly in terms of how far it will fall. Goldman Sachs analysts, for example, predict a 6% decline over the next 12 months; ING analysts forecast as much as a 10% drop.

"The dollar appears meaningfully overvalued and investors are overweight U.S. assets," said Christian Mueller-Glissmann, multiasset strategist at Goldman Sachs Group. High valuations for U.S. stocks, interest rates that don't keep up with inflation and a recovery of global growth should all weigh on the dollar, he said.

There have been great examples of the dollar surprising investors. Some see the current situation as similar to the early 2000s when the U.S. had high budget and current-account deficits and investors moved out of U.S. stocks and bonds into global markets. The dollar index fell nearly 20% in 2002.

In 2008, many expected the dollar to keep weakening against the euro, but the unfolding financial crisis threw that sharply into reverse from July onward. Currencies are notoriously difficult to predict because their behavior is the outcome of factors that affect capital flows, such as trade and investment flows, interest rates and relative growth and inflation. 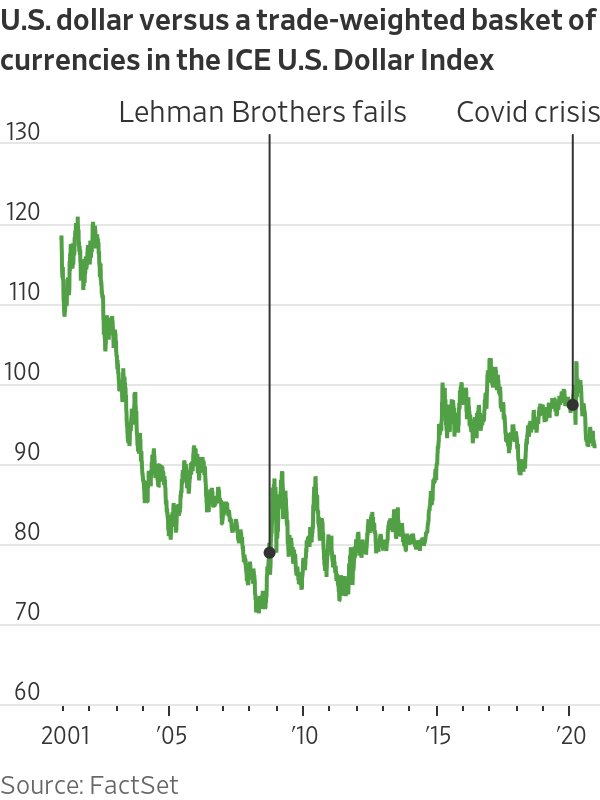 This year, the dollar surged in the spring during the Covid-19 market panic, coming back down after the Federal Reserve flooded global markets with dollars through a string of facilities to support bonds and corporate credit in the U.S. and through currency swap lines with foreign central banks. The dollar's fall continued with the reopening of economies over the summer.

Many believe that investors will buy riskier and undervalued assets as economies keep recovering.

"Excess dollar liquidity [from the Fed] is still in the system," said Salman Ahmed, global head of macro at Fidelity International. "Once things improve and reflation returns, that liquidity can go back into riskier assets."

Investors are still heavily invested in the U.S., a situation that could reverse if growth elsewhere bounces back. Money managers have kept a high proportion of funds in U.S. assets, according to investor surveys from Bank of America Merrill Lynch and Reuters.

The story now is that successful vaccines, coupled with expectations of a less-antagonistic trade policy from a Joe Biden White House, will drive global growth and make the rest of the world more attractive. Investors in that scenario would likely sell U.S. assets and buy things in other countries--that means also selling the dollar, pulling its value down.

Not everyone buys the view that investors will shift out of the U.S. and sink the dollar. Francesca Fornasari, head of currency solutions at Insight Investment, which is part of Bank of New York Mellon Corp., said she thinks the dollar could weaken but believes currencies in general are set to become more volatile.

While interest rates are stuck at very low levels in most developed markets, it is currencies that will be the main outlet for changing investor views of the relative economic outlooks for different countries.

"It's not obvious that you'll have the emergence of a clear winner among economies," she said. "The dollar has been very sensitive to changes in growth expectations in different countries."

For Mr. Riley at BlueBay, money leaving U.S. stock markets may head to the DAX, Germany's industry-heavy stock-market index, and to bank stocks.

Both have rallied in recent weeks while the dollar has weakened. European and Japanese stocks have done better than the S&P 500 over the past month. Both are filled with companies that benefit from an expanding economy: cyclical and value stocks.

The better bet in Mr. Riley's view is on emerging markets and particularly the Chinese yuan. China's trade relationship with the U.S. should get better, or at least stop getting worse, while the entry of Chinese bonds into more global indexes should improve demand for the currency, he says.

The dollar has fallen more than 5.5% against the yuan this year. One dollar buys 6.58 yuan.

The Citigroup call for a 20% fall is among the most extreme on Wall Street. It would take the ICE Dollar index down to less than 75; over the past 20 years, the dollar has been weaker only during a few months in 2008 and 2011.

An important element of Citi's weak-dollar thesis: A wave of hedging activity could lead foreign investors to, in effect, sell a substantial amount of dollars.

Foreign investors built up huge holdings of U.S. bonds since late 2016, without taking offsetting bets to protect from currency fluctuations, according to a Citi measure known as a "hedge ratio."

The ratio, which measures outstanding currency derivatives against foreign holdings of U.S. bonds, is at roughly half its recent peak from summer 2016.

What would spark a wave of activity by investors is if those hedging costs come down, thanks to a rise in longer-term U.S. Treasury yields relative to shorter-term ones and to European and Japanese yields.

Yields don't have to move far: The difference between three-month and 10-year yields need only rise another quarter of a percentage point to make hedges affordable, the Citi strategists said.

"If investors have the incentive to FX hedge next year, the outflow pressure from hedging will overwhelm by magnitudes any new flows buying U.S. fixed income at higher yields," said Calvin Tse, FX strategist at Citi.

The risk to all these forecasts is a failure to conquer Covid. Mr. Ahmed at Fidelity said people refusing the vaccine is an underestimated risk. Recent Pew surveys in America show how attitudes changed as vaccines came closer to being a reality: In May, 72% of adults said they would take a vaccine for Covid-19. That dropped to 51% in September.